In concept, the Nubia Alpha is phenomenal: a flexible OLED smartwatch display makes total sense. In practice it’s less successful, with a bulky design, rubbish camera, and frequently frustrating software.  Unfortunately, that isn’t what we’ve got, and the Nubia Alpha as-is is ugly, overpriced, and occasionally feels downright broken. I can’t recommend that you buy it, but I wish I could.

Tech news in 2019 has been dominated by flexible displays, but most of them have been found in foldable phones like the Samsung Galaxy Fold or the Huawei Mate X. Not so the Nubia Alpha – instead this is a flexible smartwatch that wraps around your wrist – and that Nubia is even pitching as a ‘wearable phone’.

First launched at MWC 2019, the Alpha is now out and I’ve spent a week wearing this rather strange device to find out if it’s a watch, a phone, or even any good at all.

The Nubia Alpha launched in April, with a Bluetooth-only version now available in Europe and North America for €449/$449  through Nubia’s online store. As of yet it isn’t available from any other retailers.

With the latest Apple Watch starting from £399/$399 and the Samsung Galaxy Watch just £279/$329, the Alpha is right at the top end of smartwatch pricing, and it’ll have to offer more than just a slick screen to justify that price tag and compete with the best smartwatches.

If you want an eSIM version that can take calls and access the internet without a phone, you might need to wait a little longer, and pay even more. That version is out now in China, but won’t reach Europe until Q3 2019, and comes to North America even later, in Q4.

I’ve been reviewing the Bluetooth version of the Alpha, so can’t comment on how well the eSIM works. 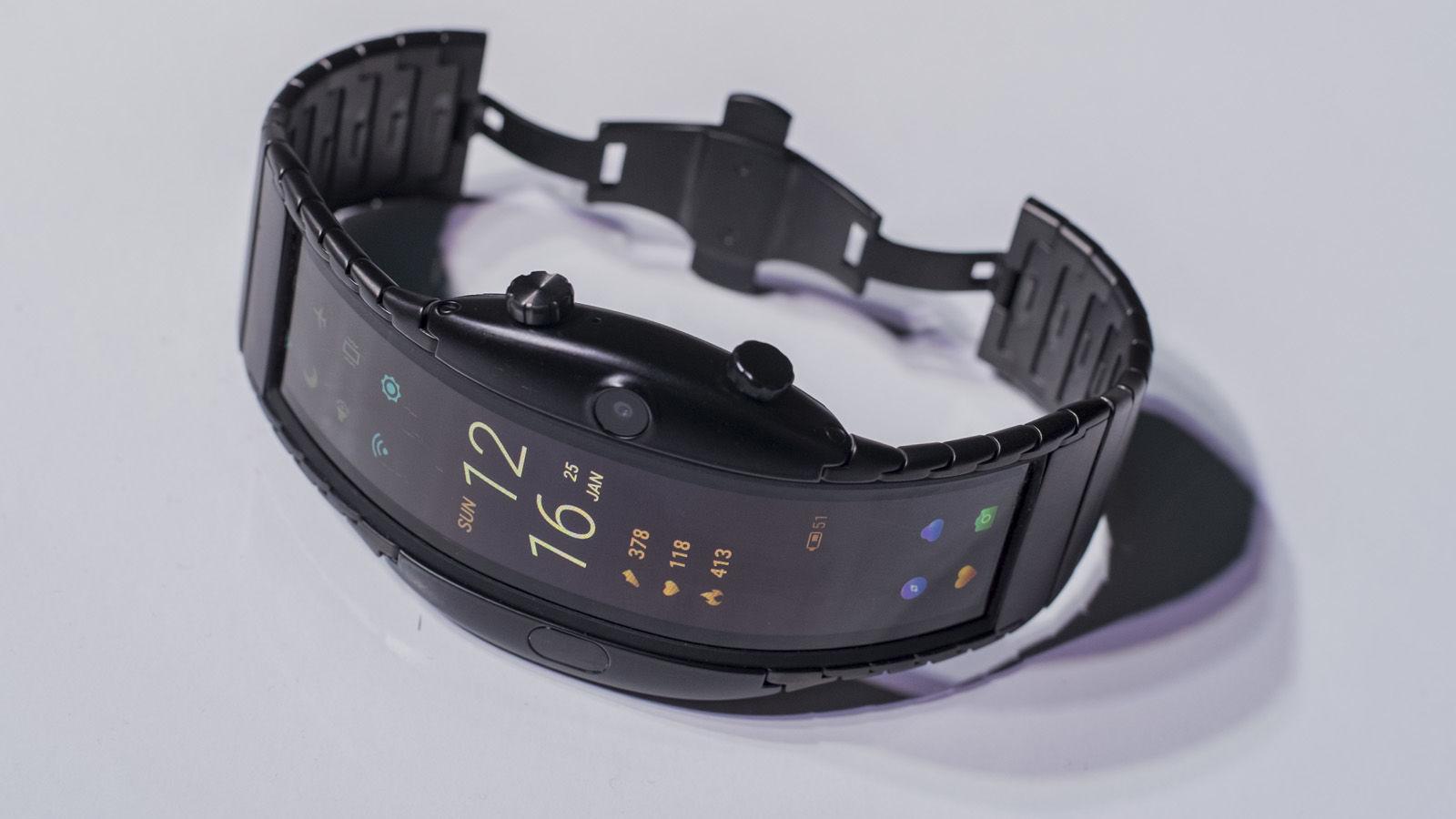 The Nubia Alpha is designed to be flexible in more ways than one. The obvious is that big (well, big for a watch) 4in flexible OLED display, which wraps all the way around the front of your wrist.

The flexible design means that no matter what size your wrist or how you wear the watch, the screen will bend round your arm to fit. Made out of 11 separate layers, it’s designed so that it won’t wrinkle or stretch as it bends – unlike a lot of those foldable phones making the headlines – and after a week of use I haven’t had any issues with the folding tech at all, unlike the controversial Galaxy Fold problems.

There is one thing in common with the Fold though: a small screen protector that’s pre-applied to the device. When people removed that from the Fold it proceeded to break the device, and I worried that the same would be the case here – though fortunately Nubia has clarified to me that this is just a screen protector, and is entirely safe to remove. 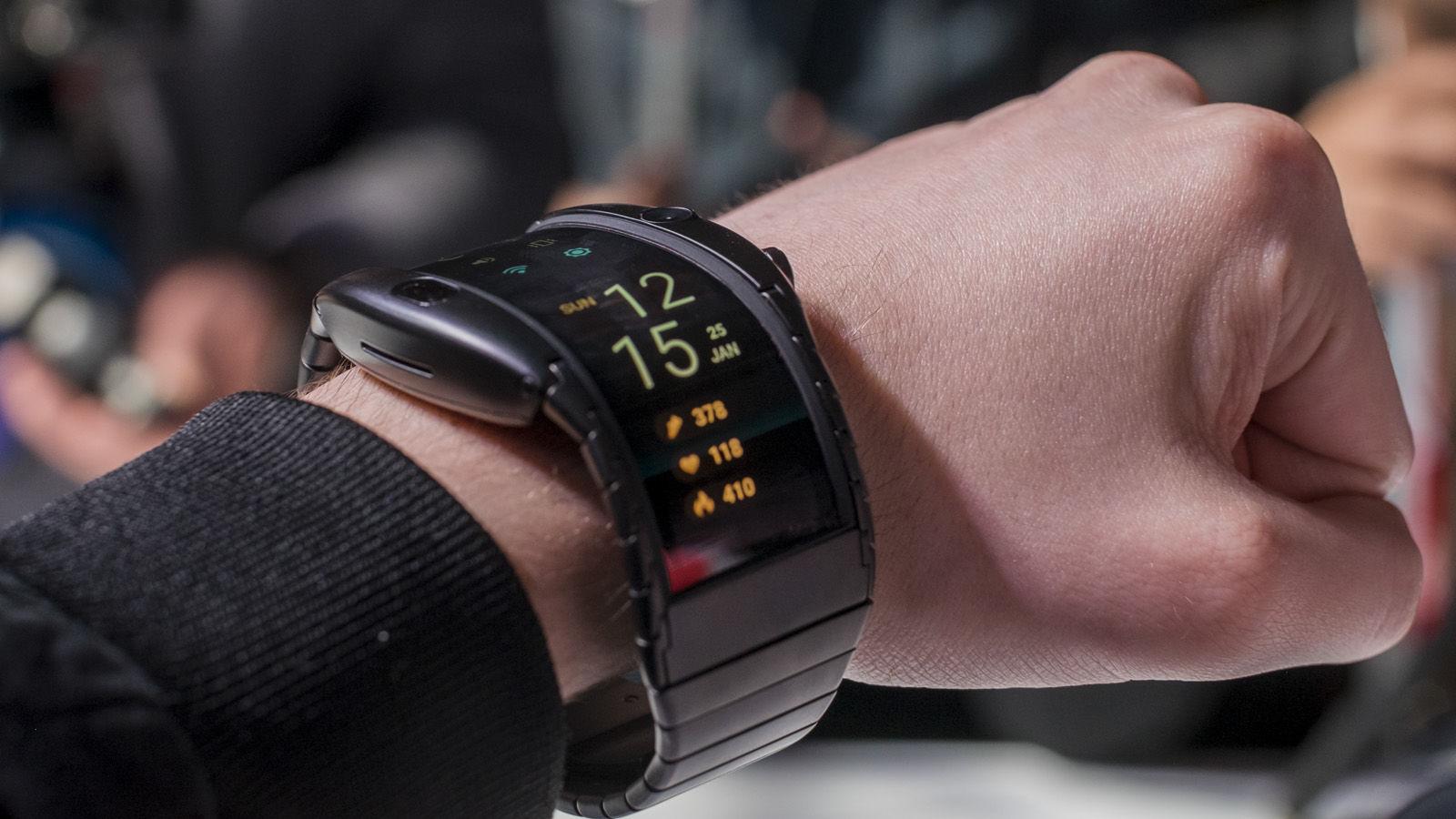 With a resolution of 960×192, at 244ppi, the screen is undeniably an odd one. Nubia is keen to point out that you can use it to look at photos or watch videos, but of course you’ll be stuck doing so at a very squished aspect ratio, and the whole user interface is similarly squeezed.

Still, the OLED panel is crisp and colourful even if the resolution is lacking, and I’m genuinely impressed by the flexible elements – it doesn’t bend all the way, just enough to fit your wrist comfortably, but the touch surface remains perfectly smooth, and doesn’t feel as cheap and plasticky as some other flexible panels.

More importantly, unlike foldable phones it does feel like this is flexible for a good reason. Smartwatches have always been limited by screen sizes, and since no-one wants a watch that extends up their forearm, having it wrap around instead makes perfect sense as a way to eke out a bit of extra screen real estate.

The main body is made out of stainless steel, with a steel strap made out of detachable links to help you find your fit. In a nice touch, these are removable without any specialist tools – there’s a small slider on each link to let you remove it. The process is slightly fiddly, but once you get the hang of it you should be able to adjust as appropriate to find your perfect size in just a few minutes. 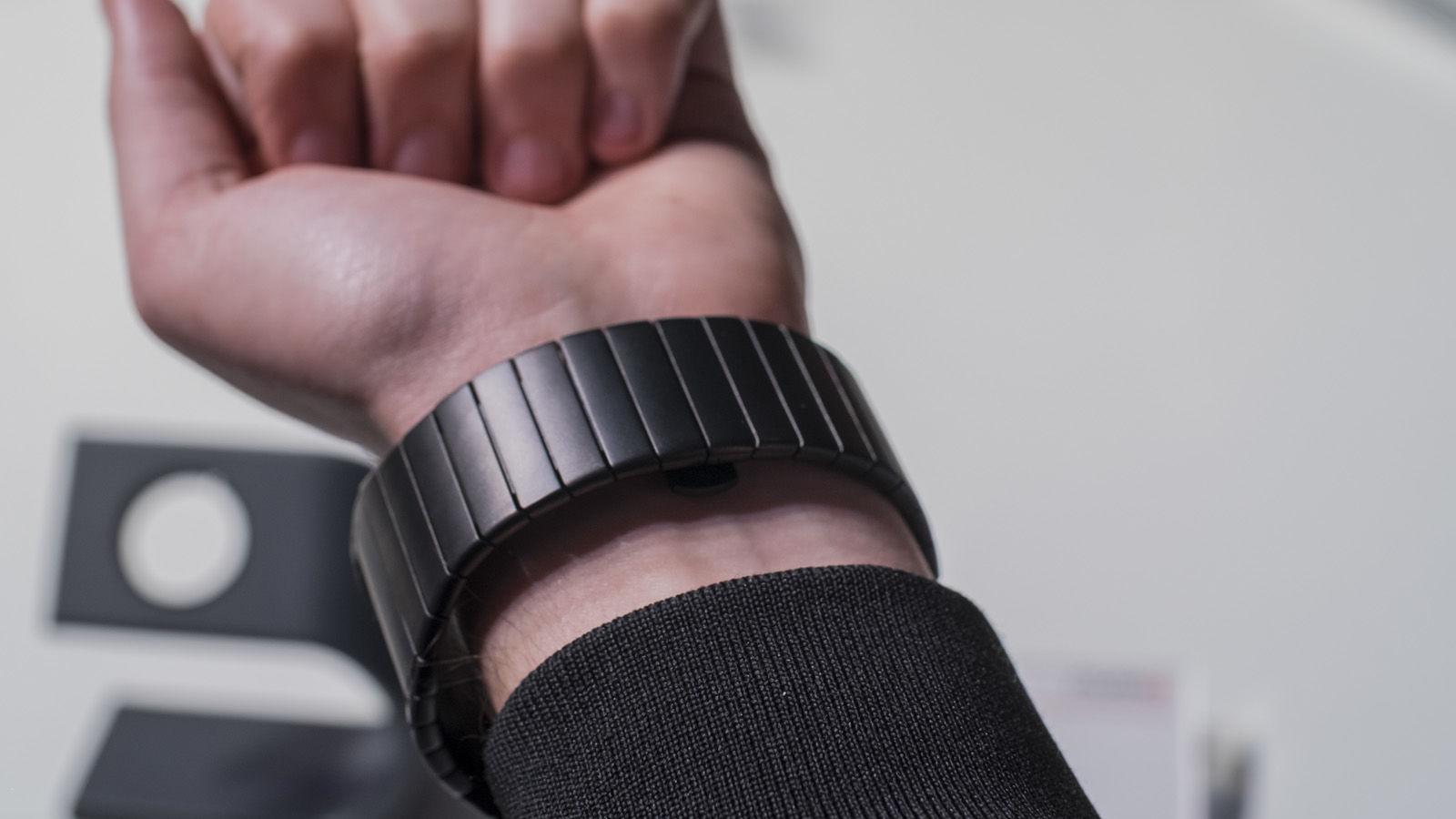 The big downside of the design is that it is a chonky boi. It’s the first thing people tend to comment on when they see the Alpha – yup, even before the display – and together with the steel construction that means it’s heavy too. It robs the watch of any chance to seem sleek and sci-fi, especially thanks to the stocky side sections that hold the camera and infra-red sensor respectively, along with the two buttons.

The Alpha should at least be fairly durable, with an IP65 water and dust-resistance rating (which basically means it’s splashproof, but you shouldn’t swim or shower with it), and Nubia claims that it’s passed a whole bevy of different durability and drop tests. It’s also meant to be able to survive 100,000 flexes, but then Samsung said something similar about the Fold…

All of this sounds great so far – and honestly the display itself is genuinely impressive, and arguably a better use of flexible screen tech than the foldable phones – but unfortunately the Nubia Alpha is much better in concept than in practice. 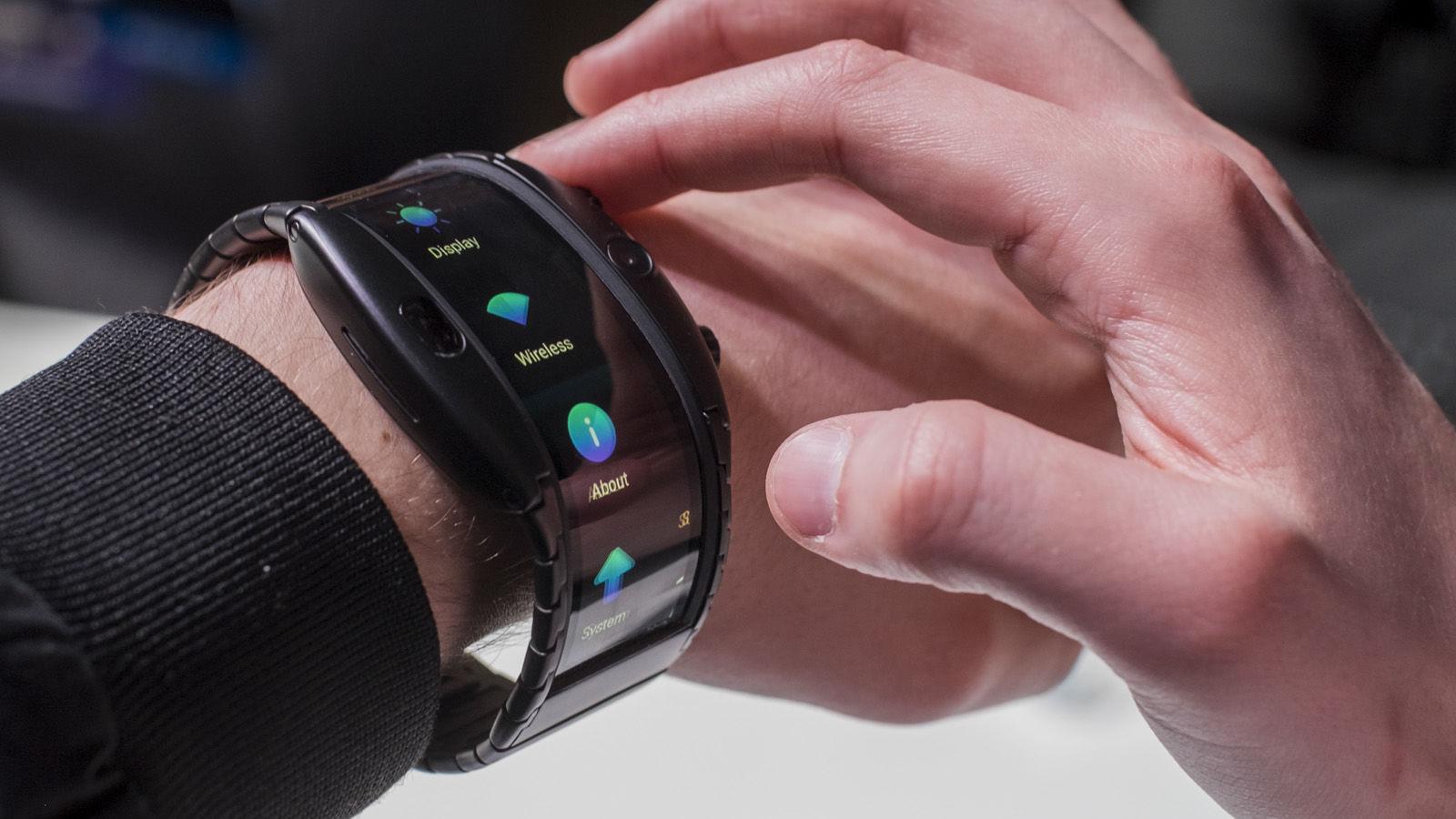 First let’s tackle Nubia’s boldest claim: that not only is the Alpha intended to serve as a smartwatch, it’s intended to be a smartphone in its own right. That means that not only can it connect to the internet without a connected phone, it can also send and receive texts and phone calls without any phone at all.

The thing is, that’s exactly what the Apple Watch 4 does, and a few other eSIM smartwatches, and no-one is about to ditch their iPhone for an Apple Watch. Nubia seems to think that screen size is the only thing holding people back from replacing their phone with a watch, and that just isn’t the case.

For one, there’s processing power – the Nubia Alpha is running the Snapdragon Wear 2100 – a three-year-old Qualcomm smartwatch processor – with 1GB of RAM and 8GB of storage. Fine for a watch (though not even top-spec there), but it can hardly compete with a Snapdragon 855 with 8GB RAM, and even here it leaves you with a bit of scrolling lag. 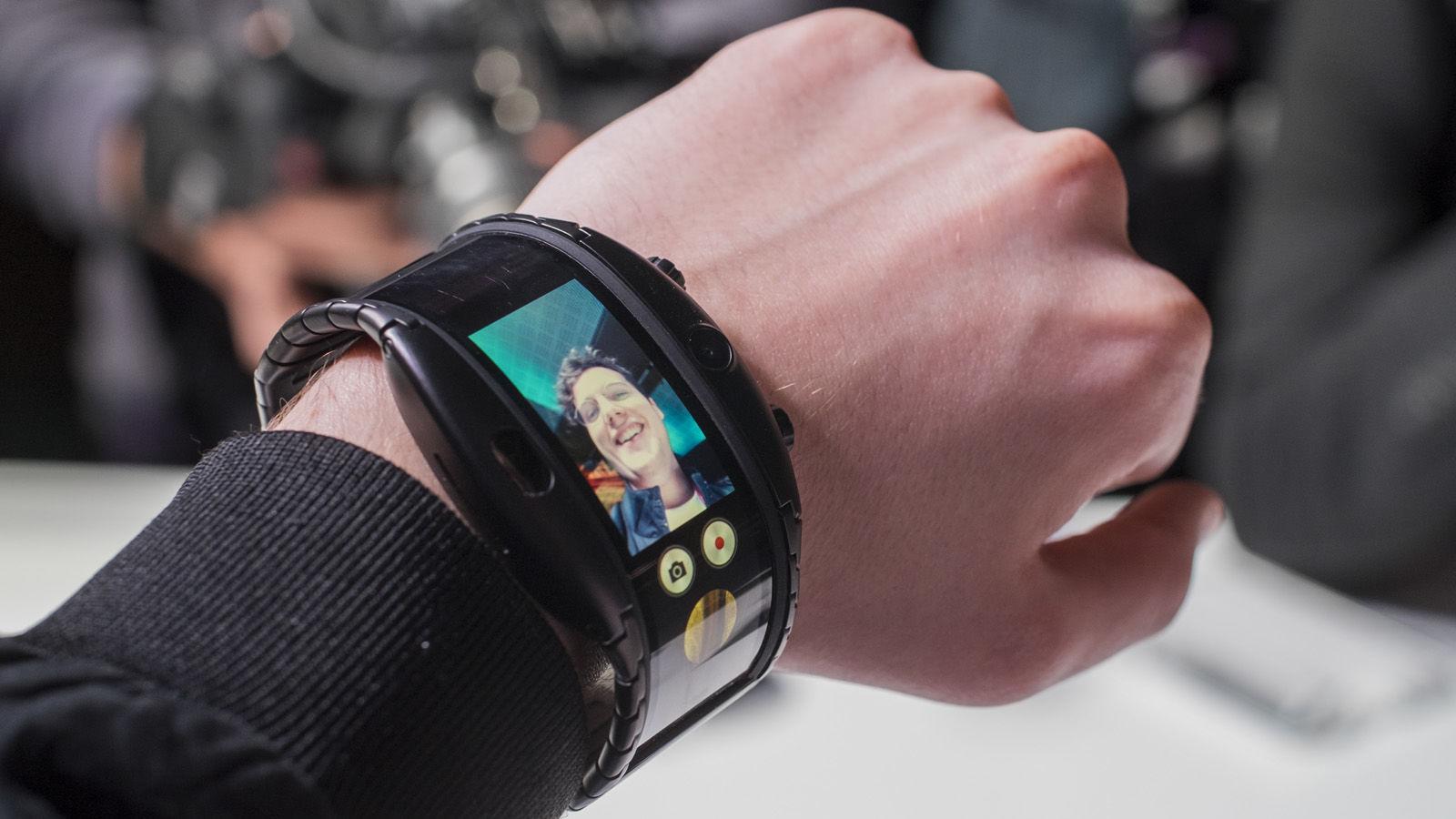 You’re probably not about to retire your smartphone camera either. Sure, there’s a 5MP shooter here, but a camera on your wrist really leaves you stuck either taking the world’s least flattering selfies or awkwardly twisting your wrist back to take photos of anything else. You can record video too, but only up to about ten seconds at a time, and the quality is pretty atrocious.

Then there’s apps. A watch can, inevitably, only run a fraction of the apps that a phone can, and Nubia has painted itself into a corner by using its own operating system – Alpha OS – meaning that third party app support is essentially non-existent. So yeah, you’ll be able to use this to make phone calls, but that’s probably the thing you use your phone to do the least, and the Alpha can’t replicate most of the rest of it.

Alpha, not quite Omega

As a smartwatch the Alpha is better at least. It’s got step tracking, a heart rate sensor, and sleep monitoring – though it’s so chunky that you probably won’t want to sleep with it on. Battery life is usually around two days, which is actually fairly impressive given the screen, and means you won’t have to worry about charging it every single day. It’s also compatible with both iOS and Android, though I’ve been reviewing it with an Android phone. 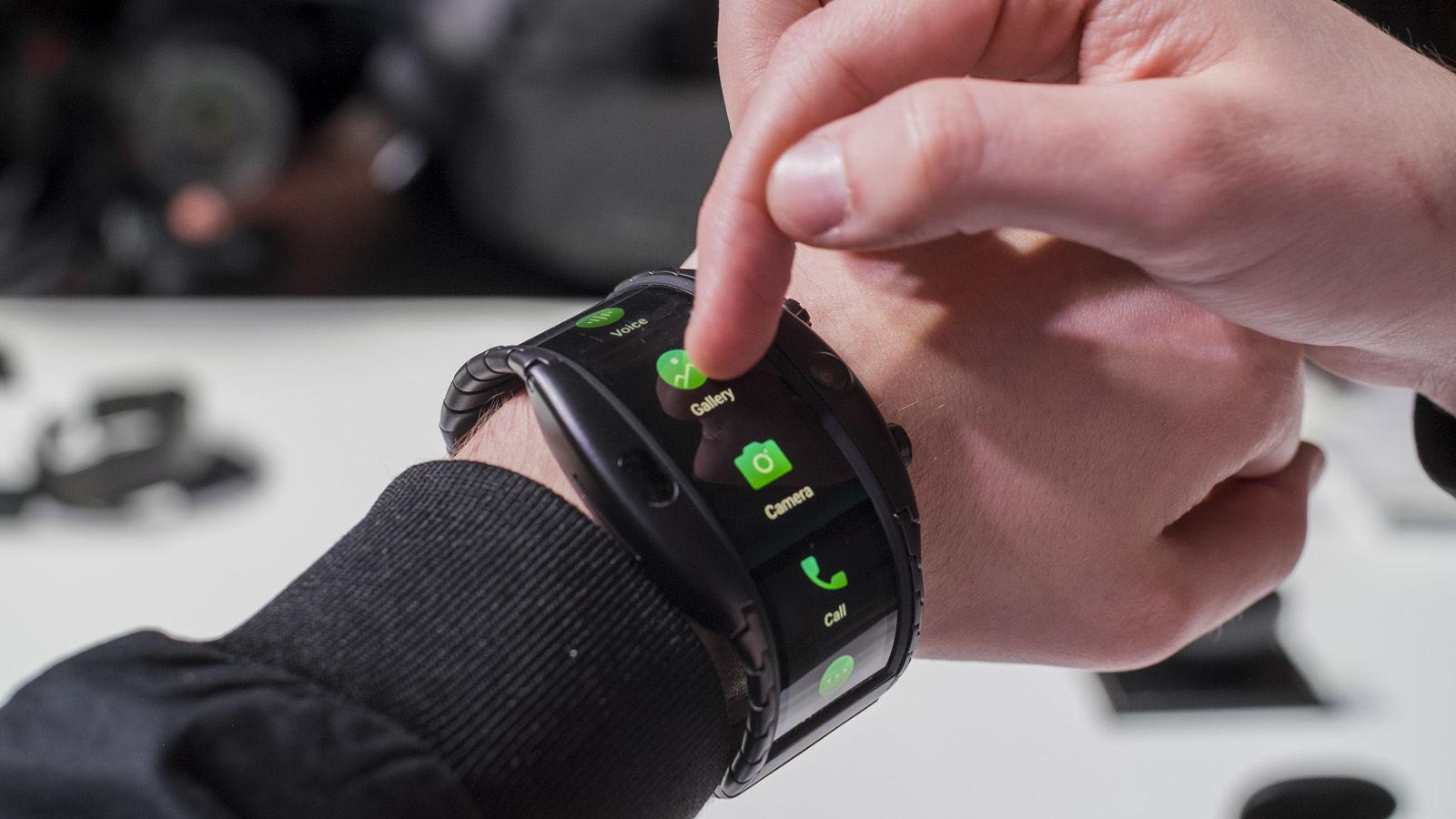 The OS itself is an odd beast that succeeds as much as it frustrates. Nubia promises ‘hyper-dimensional interaction’ – whatever the hell it thinks that means – but the result is essentially an OS that’s made up of multiple lists of icons that you can scroll through and flick between. It’s much less clunky than it sounds, and the lists are both colour coded and grouped by them – all the fitness tracking stuff sits together – so it actually becomes a fairly smart way to make the most of the Alpha’s vertical screen real estate.

Since you’ll be scrolling a lot, Nubia has tried to improve the scrolling experience through ‘air interaction mechanics’. It has failed. Similar to the recently  reviewed LG G8 ThinQ, the Alpha will let you control the device without touching the screen at all, simply registering your finger movements in the air above it.

You move your finger up and down to scroll, or left and right to flick between menus, and if you’re lucky the watch will correctly recognise which way you’re trying to swipe and act accordingly. It works… sometimes. Often it doesn’t notice the gestures at all, or gets the direction wrong. Even when it does work, it’s slower and more awkward than just using the touchscreen, and it’s hard to imagine when the air gestures would ever be preferable to just touching the thing. 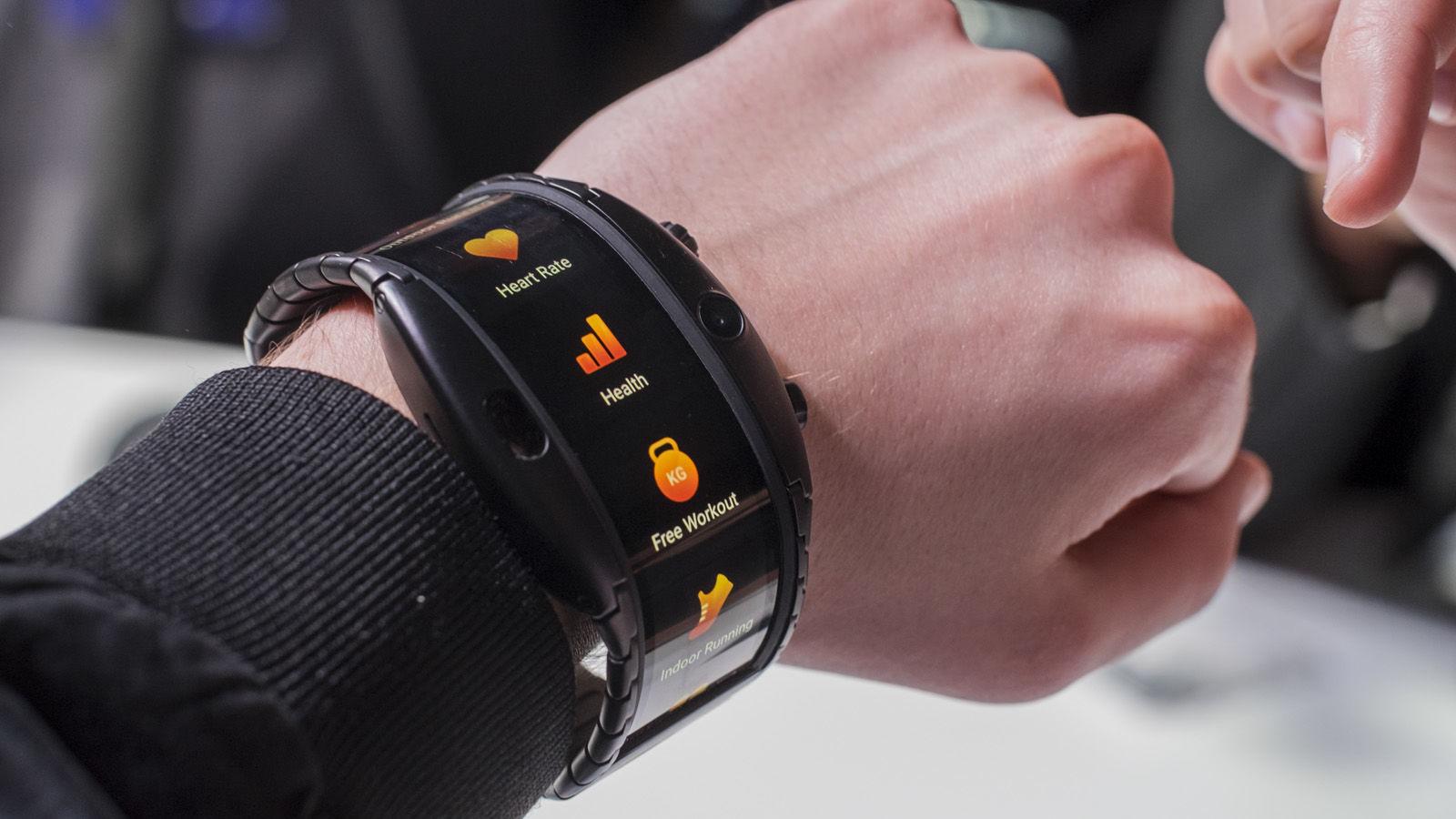 Clunkiness abounds across the rest of the software too. The watch drops connection to a phone every time it leaves Bluetooth range, and must be manually reconnected from the phone. Syncing photos and videos also has to be done from your phone, as does notification management – which is a whole other mess.

Once those notifications come through, all you can do is read them and close them – with no apps there’s no way to interact with them, but more damningly there isn’t even a way to swipe to clear them meaning you have to open and close every single notification that comes through – even if you’ve already cleared it from your phone.

In concept, the Nubia Alpha is phenomenal: a flexible OLED smartwatch display makes total sense, and seems like a much better use of flexible panels than folding phones. The screen is undeniably the best thing about the Alpha, and I can’t wait to see Nubia’s second attempt, or for other manufacturers to run with the idea.

It’s wild over-ambition elsewhere that really lets the Nubia Alpha down. If the company stripped out the rubbish camera and jerky gesture controls, it could slim down the body and probably cut the price too. Throw in some software refinements and this could be a brilliant piece of tech.

Unfortunately, that isn’t what we’ve got, and the Nubia Alpha as-is is ugly, overpriced, and occasionally feels downright broken. But the idea behind it is still fantastic, and I only hope the Alpha’s flaws don’t overshadow the potential at its heart.