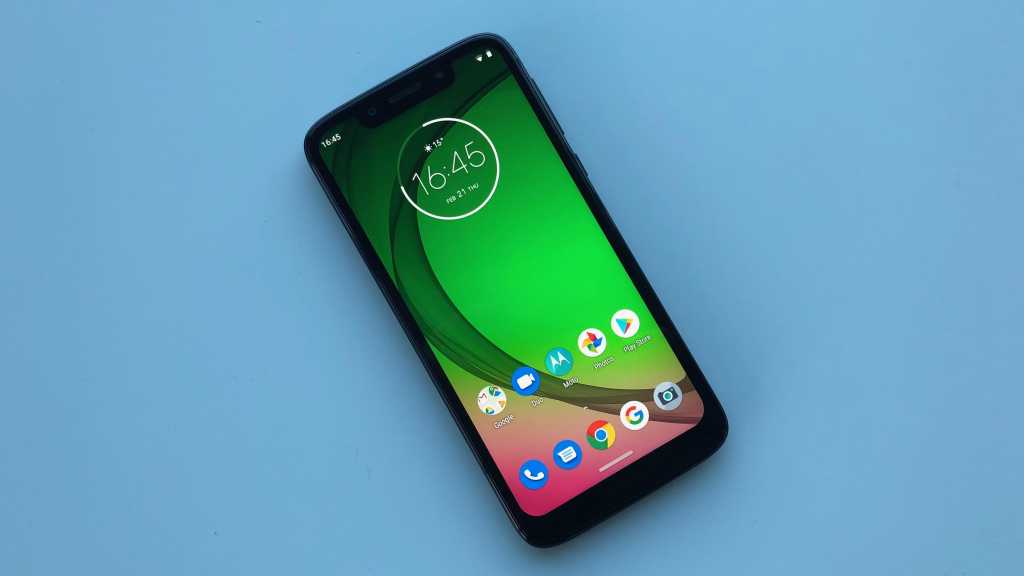 The Moto G7 Play is a solid smartphone that despite not featuring the latest processor and an insane amount of RAM can provide a solid mobile experience for those on a budget. It’s made mainly from plastic, but smart design choices still make the G7 Play look more premium than it actually is. The only downside is a camera setup that doesn’t really do the phone justice, but hey, there are always concessions to be made with budget smartphones.

The Moto G series has always been a fan-favourite, offering true value for money in a world where smartphones can now easily cost over £1000, or $1000. Motorola has taken that to the next level with the Moto G7 Play, a budget smartphone that’s actually £30 cheaper than last year’s budget-friendly G6 Play without compromising on the core smartphone experience.

It’s not perfect, but there’s a lot to love about the Moto G7 Play and it’s certainly one of the best budget smartphones on the market right now.

Before we delve into what the Moto G7 Play offers, let’s discuss pricing and availability. Unlike the standard Moto G7 that is an Amazon exclusive in the UK, the £149/$200 Moto G7 Play should be available to purchase from the likes of Vodafone, Tesco Mobile, John Lewis in the UK and Walmart and Best Buy in the US once it’s released on 1 March 2019.

This pits the Moto G7 Play up against other amazing budget smartphones including the £149 UMIDIGI One Pro and the £129 Nokia 5.1, but does it offer enough to tempt users? Carry on reading to find out.

The Moto G7 Play looks more like a mid-range smartphone than something that costs less than £150, and although it uses cheap materials, it manages to make it look sleek. Take the rear for example; it’s primarily made of plastic, but features a textured finish that provides a satisfying sensation when running your fingers over it. That, and other fine details on the rear make the G7 Play look and feel more expensive than it actually is.

The use of plastic also means that the phone is impressively lightweight when compared to other smartphones available in 2019, weighing in at a featherlight 149g. This makes it barely noticeable in the pocket, especially when coupled with a thickness of only 8mm.

Despite the fact that the smartphone houses a 5.7in display, the 19:9 aspect ratio and curved rear of the smartphone mean that it’s not uncomfortable to hold in the hand over long periods – a blessing for those of us with smaller hands in a large-screen world!

You’ll also find a headphone jack on top, a USB-C charger on the bottom and a fingerprint scanner embedded below the camera on the rear, complete with Moto branding to finish it off. All that is pretty standard in 2019, but it’s good to see that it’s all present on such a cheap smartphone.

Enough power to get stuff done

Admittedly, Qualcomm’s octa-core Snapdragon 632 isn’t the fastest chipset you’ll find in a smartphone in 2019, but it’s more than enough to provide a decent budget mobile experience. The Snapdragon 632 is backed up by 2GB of RAM, and features 32GB of built-in storage for games, photos and apps. This is expandable by 512GB via a microSD card slot for hardcore mobile users that take a lot of snaps and download a lot of apps.

That setup helps to power the surprisingly bright and crisp display. Despite the budget price-tag, the G7 Play boasts a Full HD+ (720 x 1512) 19:9 5.7in IPS LCD display, and while it isn’t quite as bezel-less as other 2019 smartphones with both a notch and thick side bezels, it still boasts an impressive 77.3 percent screen-to-body ratio. The curved edges of the display give it a very 2019 feel while also looking very aesthetically pleasing, especially for a smartphone as cheap as the G7 Play.

But how does it perform when gaming, browsing and snapping? Despite not having the top-of-the-range specs, the G7 Play can handle 3D games like PUBG Mobile – with high-quality textures selected – without any hint of lag or frame rate drops. It’s a similar story with Hitman Sniper and a handful of other 3D games that we’ve played on the smartphone during our testing.

That’s pretty impressive, and that performance extends to all areas of the phone, from scrolling through menus to browsing Facebook – it’s fast, responsive and essentially doesn’t feel like a budget phone in terms of performance, and Motorola should wear that badge with pride.

To help quantify performance, we ran a series of benchmarks to test various aspects of the smartphone, from CPU performance to graphical performance. You can take a look at how the Moto G7 Play stands up to competitors in the below interactive chart:

It’s fairly impressive in the battery department too, offering a 3,000mAh battery that we’ve found can comfortably provide all-day use performing tasks like browsing Facebook, playing a mobile game or two and taking some snaps without a top-up.

In our battery benchmark test, the G7 Play managed a total of 7 hours 26 minutes, putting it in line with the likes of the Honor View 20 and OnePlus 6T. That’s not bad, considering the price tag!

While the Moto G7 Play can handle casual mobile gaming and browsing, it won’t be winning any awards in the camera department. The G7 Play sports a single 13Mp rear snapper, with f/2.0, 1.12um pixel size, single LED flash and HDR support. The rear snapper also boasts 4K video capture at 30fps, as well as 1080p at both 60 and 30fps.

That’s impressive for a budget smartphone, but let’s not kid ourselves and pretend that it’s able to compete with the likes of the Samsung Galaxy S10, Huawei Mate 20 Pro or iPhone XS.

Photos taken in bright light are detailed on the surface, but zooming in even slightly will reveal a layer of noise cancellation that gives most photos a soft look. The below snap of St. Pancras hotel is a good example of this (click for full-size image), as zooming in reveals a lack of detail in the brickwork, pavement and other areas of the photo too.

The lack of a decent autofocus component is obvious when trying to take photos, as the phone rarely gets the focus right on the first attempt using the built-in PDAF system. You’ll find yourself, as we did, constantly tapping the screen until it looked right, and even then, photos look a little soft when viewed on a PC.

You’ll also find a handful of other shooting modes built into the Camera app, including fairly standard modes including Panorama and Portrait, though the latter isn’t exceptional as it’s handled by a single sensor.

You’ve also got a colour picker mode that allows you to display only one colour in the photo, with everything else displayed in black-and-white. We must admit that we had low expectations for this mode, but we were pleasantly surprised; it’s not perfect, but it’s certainly passable for those that want to take arty shots on the G7 Play.

That performance extends to the single front-facing 8Mp camera with LED flash, which is decent enough for basic Instagram selfies, Snapchat Stories and Skype video calling, but the background is easily blown out in bright sunlight, inhibiting your overall selfie game.

You have to make concessions when buying a sub-£150 smartphone, and in the case of the G7 Play, the Camera department is arguably the weakest area. It’s decent enough to capture everyday snaps, just don’t expect to capture something worthy of winning a photography competition.

The Moto G7 Play runs Android 9 Pie out of the box, an impressive feat for a budget smartphone when you consider that the majority of 2018 flagships – and even some 2019 smartphones – don’t offer the Android Pie experience. What makes this even better on the G7 Play is that it’s almost stock Android, providing that clean, slick mobile experience, with the only Moto-themed software available in the form of Moto Gestures.

Moto Gestures provide a variety of handy shortcuts that can improve your mobile experience. There is a range of features in the Moto app, all of which can be enabled or disabled depending on your preference. Features include the ability to perform actions like chop with your smartphone to enable the torch, take a screenshot with a three-finger-tap and the ability to enable DND mode when the phone is flipped onto its screen. They’re not revolutionary, but they’ll certainly make the G7 Play experience a little smoother.

There’s also a pill-like alternative to the standard Android control layout that lets you go back, switch apps, go Home and more by swiping on an iOS-esque pill bar at the bottom of the display. It works well, although it is a bit fiddly initially and does take a bit of time to get used to.

It’s small software features like this that improve the overall experience and make the G7 Play stand out from the crowd.

The Moto G7 Play isn’t a flagship killer, but at £150, it wouldn’t be. Instead, the G7 Play is a solid smartphone that despite not having high-end internals can provide a smooth, lag-free mobile experience – even when playing the likes of PUBG Mobile, and that’s impressive. The build quality is great despite the use of plastic, with fine detailing across the handset giving the G7 Play a more premium look and the lightweight nature of the phone is certainly a plus.

Of course, there have to be concessions made in a sub-£150 smartphone, and in the case of the G7 Play, that’s the cameras. While images are generally well-lit, the lack of a decent autofocus system means that most of your pictures will come out looking a little bit soft.

Still, the Moto G7 Play is an impressive bit of kit, and you’ll struggle to find something better at this price point.