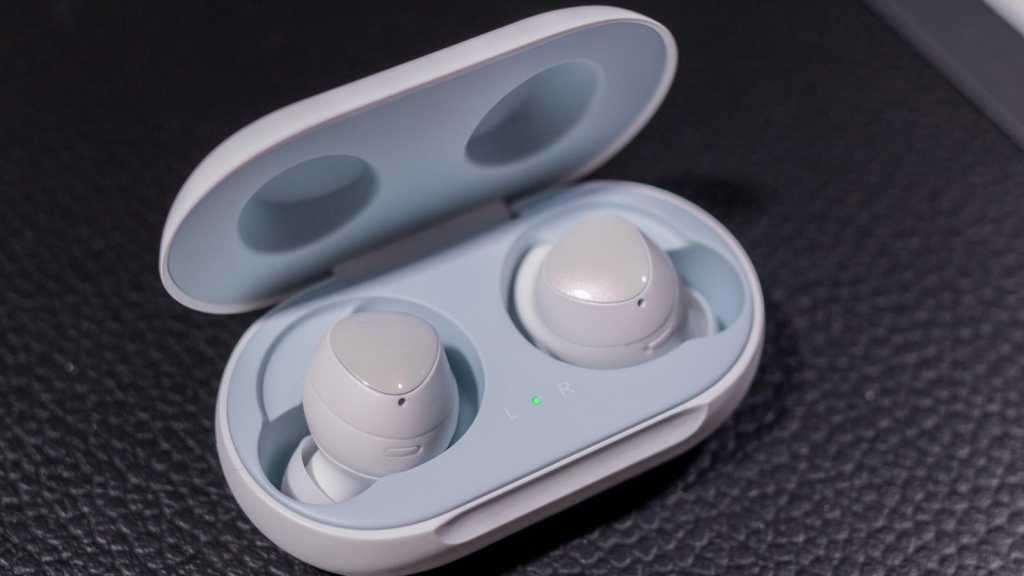 The Galaxy Buds are solidly good wireless earbuds with comfortable design and reasonable sound quality for an affordable price. Samsung has added some nice features here like Ambient Sound, but there are also cost cutting measures and iPhone owners will want to avoid considering these as an AirPods alternative.

The Galaxy S10 and Galaxy Fold might be grabbing all the headlines but Samsung also announced new headphones at its Unpacked event. We’ve got a pair so here are our thoughts on the Galaxy Buds.

The first piece of good news is that you can pick up the Galaxy Buds for a more affordable price compared to the £199 IconX from last year.

The Galaxy Buds are £139/$129 which means they are cheaper than Apple’s AirPods, and most other wireless earbuds. This is one of the plus points for the Buds already.

You can order them from Samsung,  Carphone Warehouse and  Amazon. Read about the rumoured Galaxy Buds+.

The Galaxy Buds come in three colours: a garish neon yellow (which might go with your gym kit), black and white. We’ve taken a look at the latter, which has a sort of mother of pearl effect on the outer part of the earbud.

Regardless of what colour you choose, the Galaxy Buds are smaller and lighter than the IconX. They’re 30 percent smaller, in fact and just 5.6g per bud so are more comfortable.

You get three different sizes of tips in the box and three different wingtips, too, so you should be able to find the right combination for your ears. We found them comfortable and didn’t find them slipping out much at all.

Samsung does show them being used for running so an IPX2 rating means the odd drip of sweat or water isn’t something to worry about. 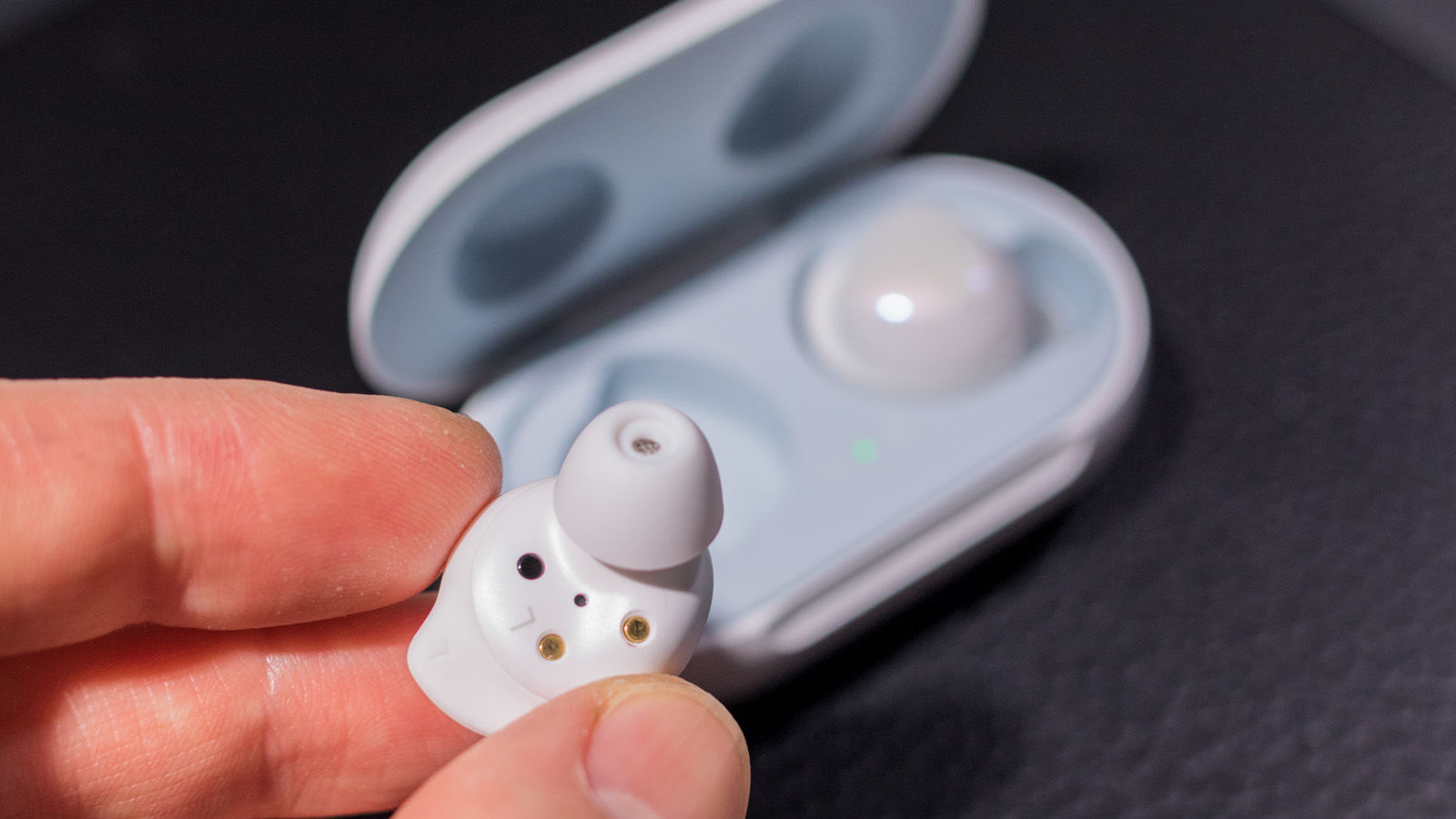 On the outside of each ear bud is a touch sensitive panel so you can easily control your playback including play/pause and skipping tracks. They can also be used to handle calls and summon Bixby (or other digital assistants).

Both sides do the same thing so it doesn’t matter which one you reach for. The only real issue here is that should you need to adjust the earphone, you’ll probably end up tapping the button by mistake.

The last thing to mention here is the charging case, which is like most others. The Buds sit neatly inside when you’re not using them and charge via tiny metal contacts. The case is smaller than before and stays shut with magnets.

An LED on the front tells you when charging it taking place but there’s no way of knowing how much juice the case has left which is a shame. A set of four or five LEDs and a button would do the trick.

The case itself charges via USB-C or wireless charging. If you get a Galaxy S10 you can make use of its Wireless PowerShare feature to charge the case by placing it on the back of the phone. That’s pretty cool. 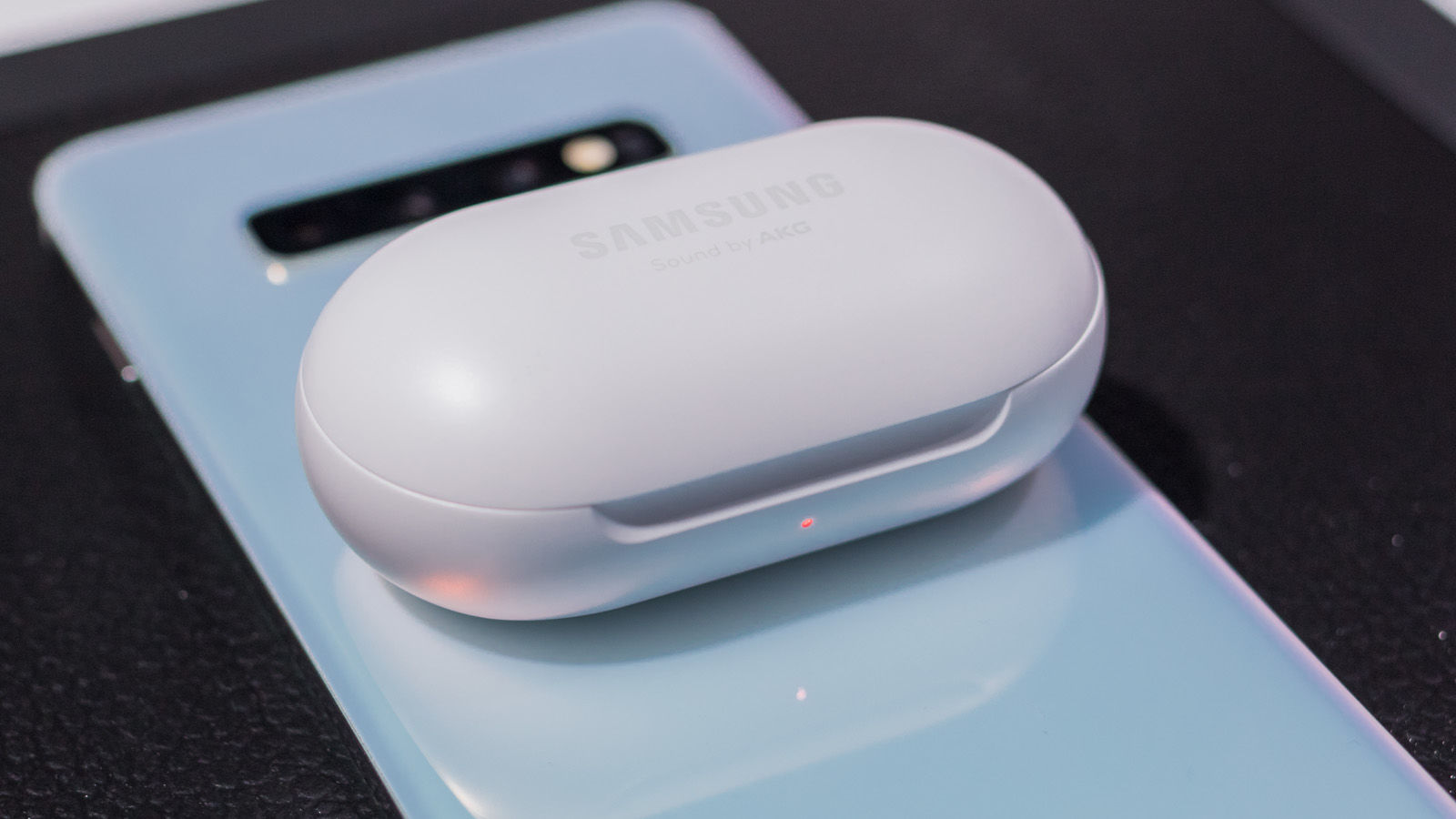 Headphones these days are much more than just ‘how do they sound’, modern features and smart elements are almost essential to attract consumers. While the Galaxy Buds have a few interesting things going on, it depends what phone you have as to whether you can take advantage of them.

Like Apple’s AirPods, Samsung has made sure the Galaxy Buds are easy to pair with a Galaxy device. When you open the case your Samsung should see them and pop up a message. Agree to the settings and you’re all set.

If you’re looking for AirPods alternatives then the Galaxy Buds aren’t really the best choice. There’s nothing stopping you using them with an iPhone but the experience is very different namely because Samsung has a Galaxy Wearable app on Android that you’ll need to make the most out of the Buds – otherwise it’s like having a supercar with a speed restriction.

With the app, you can control lots of features the Galaxy Buds have; some of which you’d otherwise not even know about. There’s an equaliser so you can adjust the sound profile and you can also do other things like cusomise the touch buttons (the long press anyway).

One of those features you might not even know about it Ambient Sound which lets you hear what’s going on around you using the microphones on the outside. You can switch this on permanently for things like running so you’re safer or just use it temporarily with a long press for things like announcements or if someone asks you something.

The Wearable app also lets you choose what notifications are allowed through and can also be used to find lost Buds.

With sensors on the inside of each bud, your music pauses when you take the headphones like many modern pairs of headphones. 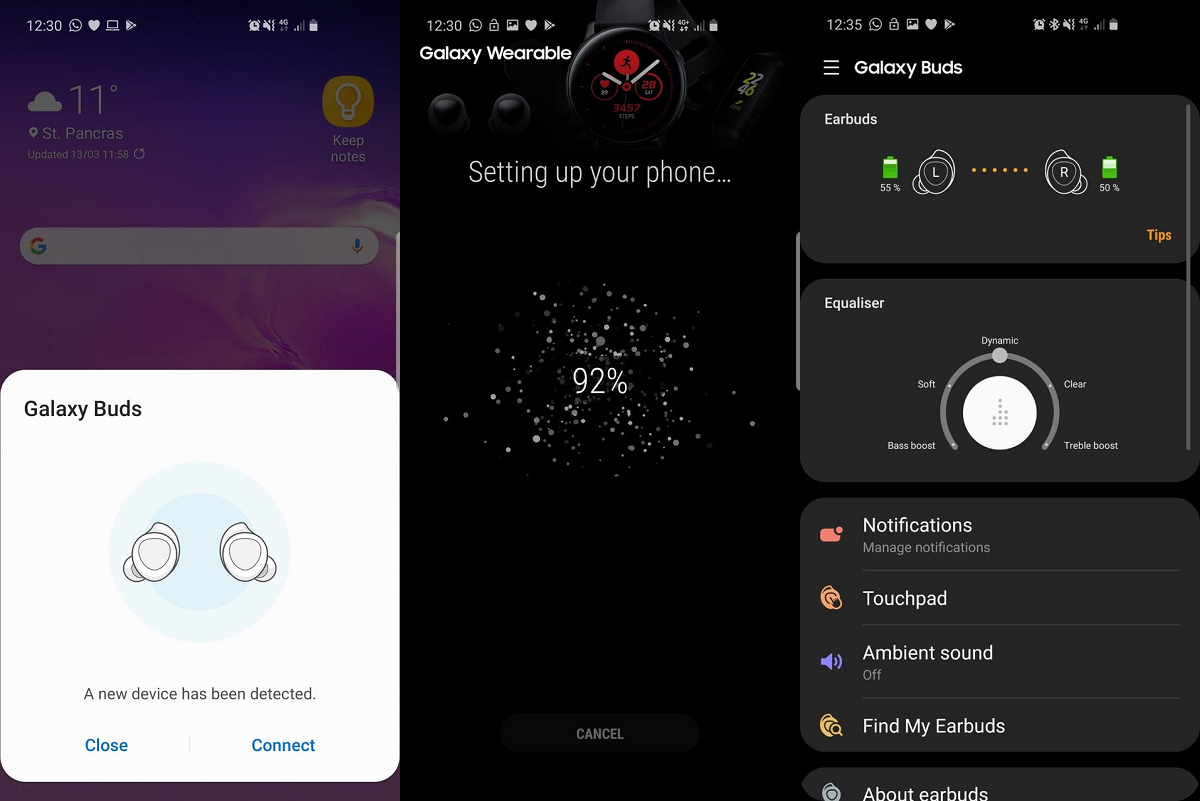 Like other Samsung products, these are ‘sound by AKG’ (not ‘tuned’ any longer) and the Galaxy Buds sound good. However, they don’t blow us away like some rivals.

This is partly down to the Buds lacking the aptX codec the IconX headphones have. We assume this is part of cost saving but does mean a downgrade on wireless sound quality.

Thanks to a good fit, the earphones offer excellent noise isolation. You can’t hear the outside world much at all which is good but the Ambient Sound mode is handy to the aforementioned situations. The fit also helps with sound quality, especially bass.

We find the Galaxy Buds to have a pretty flat response so there’s no big emphasis on a particular area like bass or mid-range. This makes them good for lots of different types of music but also means they don’t have much of a wow factor.

There are five modes in the equalizer – Bass boost, Soft, Dynamic, Clear, Treble boost – so you can try these out to see if any suit your personal taste or the type of content you’re listening to. We’re not overly keen on any of them apart from Dynamic but even this option has a slightly artificial sound to it.

At this price, the Galaxy Buds sound good but if you’re after the best quality then we’d recommend spending a little more on the RHA True Connect. 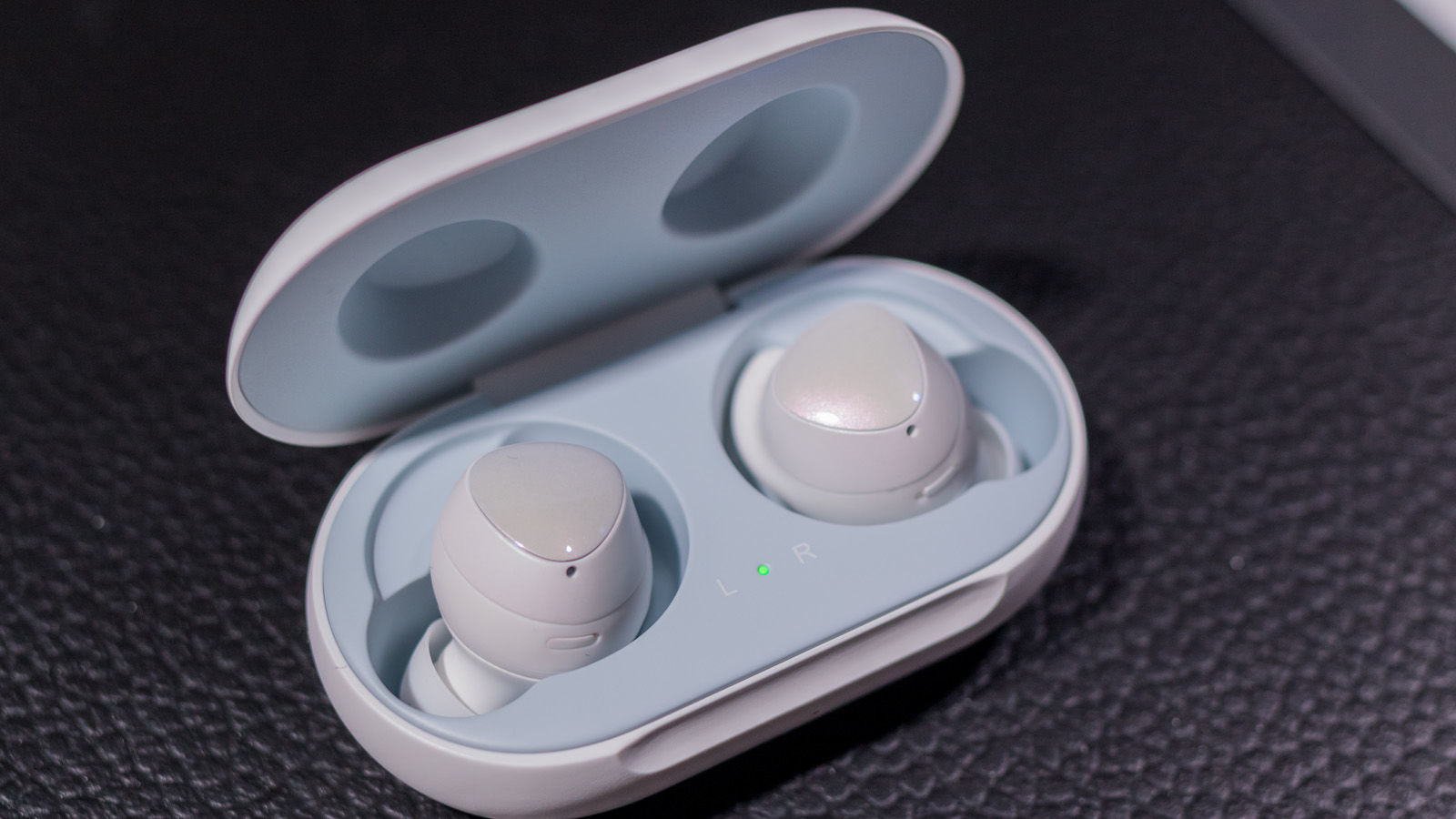 In terms of battery life you’ll get up to six hours of music playback or five hours of calls. In our testing we got pretty close to that six hour mark for rocking out to some banging tunes.

The slight disappointment here is that the charging case can only increase things to 13 hours (or 11 for talk time) when we’re used to wireless earbuds being charged multiple times from the case.

The total time isn’t bad but there are longer lasting rivals out there if that’s what you need. The advantage here is that case charges quickly over USB-C and also wireless charging. As we mentioned earlier, you can use the Galaxy S10’s reverse wireless charging to top up the case – handy if you don’t mind your phone being face down for a bit.

The Galaxy Buds seem are a decent pair of wireless earbuds offering a good combination of price, design, features and sound quality.

We find them comfortable which is tricky to achieve with wireless earbuds and some of the features here are useful like responsive touch controls and an Ambient Sound mode. With no aptX, the Buds aren’t the best sounding earbuds around and don’t have the best battery life either.

It’s also worth noting that iPhone users won’t be able to make the most of the Galaxy Buds with the essential companion app only available on Android. Even in the Android world, the Buds are best used with the Galaxy S10 to make use of the smart pairing and reverse wireless charging.