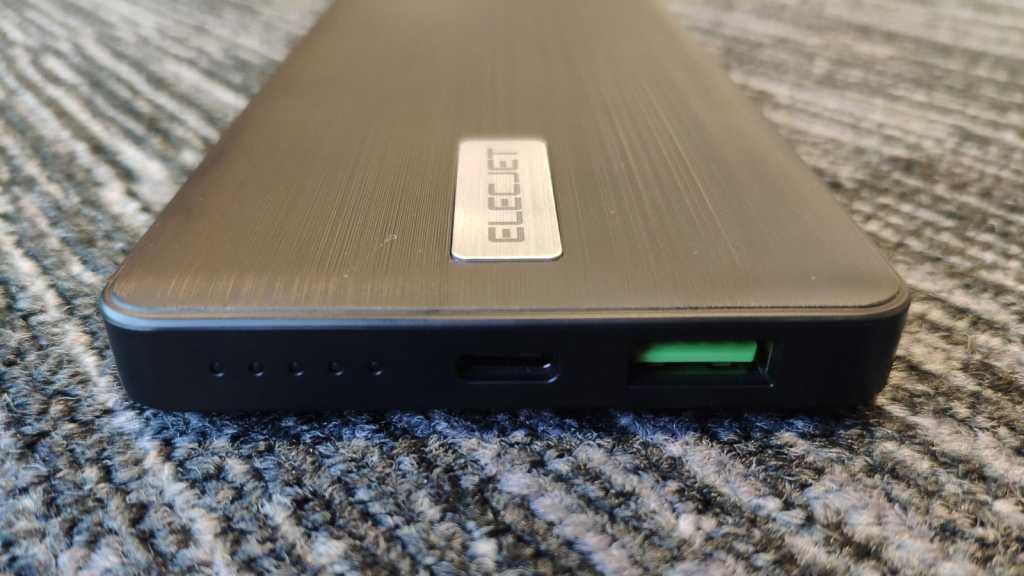 Recharging mobile devices is a necessary evil, and the Elecjet Apollo Traveller can help take away some of that pain with an impressive 18-minute recharge time. Though it can’t actually make your phone charge any quicker, its 45W USB-C output is faster than most. This 5,000mAh power bank will offer most phones one full charge, and some (such as iPhones) up to two charges. It is expensive, and with the necessary wall adaptor and shipping to the UK you’re looking at about £70 all in, but it’s worth it for the convenience it adds, should you be able to stretch your budget this far.

We’ve been hearing about the extreme speed advantages of graphene battery tech for several years now, but this is the first time we’ve seen it applied in a power bank. Elecjet’s Apollo Traveller uses a graphene composite that makes it the fastest portable charger we’ve ever tested.

Elecjet promises a full recharge from 0- to 100% in just 18 minutes, which is incredible when you consider that most power banks of this capacity will take around three- to four hours to fill – even longer when used with a slow charger.

Power banks have an average efficiency of about 65%, with the best portable chargers hitting 80- or 90%. That means the advertised 5,000mAh capacity is much less when it comes to how much power is actually available to your devices. But even accounting for some loss, the Apollo Traveller will still offer almost any smartphone a full charge, and some (such as iPhones) up to two.

The bottom line is it’s going to be faster and more efficient to charge the power bank before you go out than to charge your phone – and it’ll keep you going longer.

But it is worth pointing out that while the bank itself is fast to refill, it cannot magically make the phone itself charge any faster. The maximum output is 45W over USB-C, or 18W (Quick Charge 3) over USB-A, and how quickly your phone can recharge from this depends on what its own hardware is capable of. 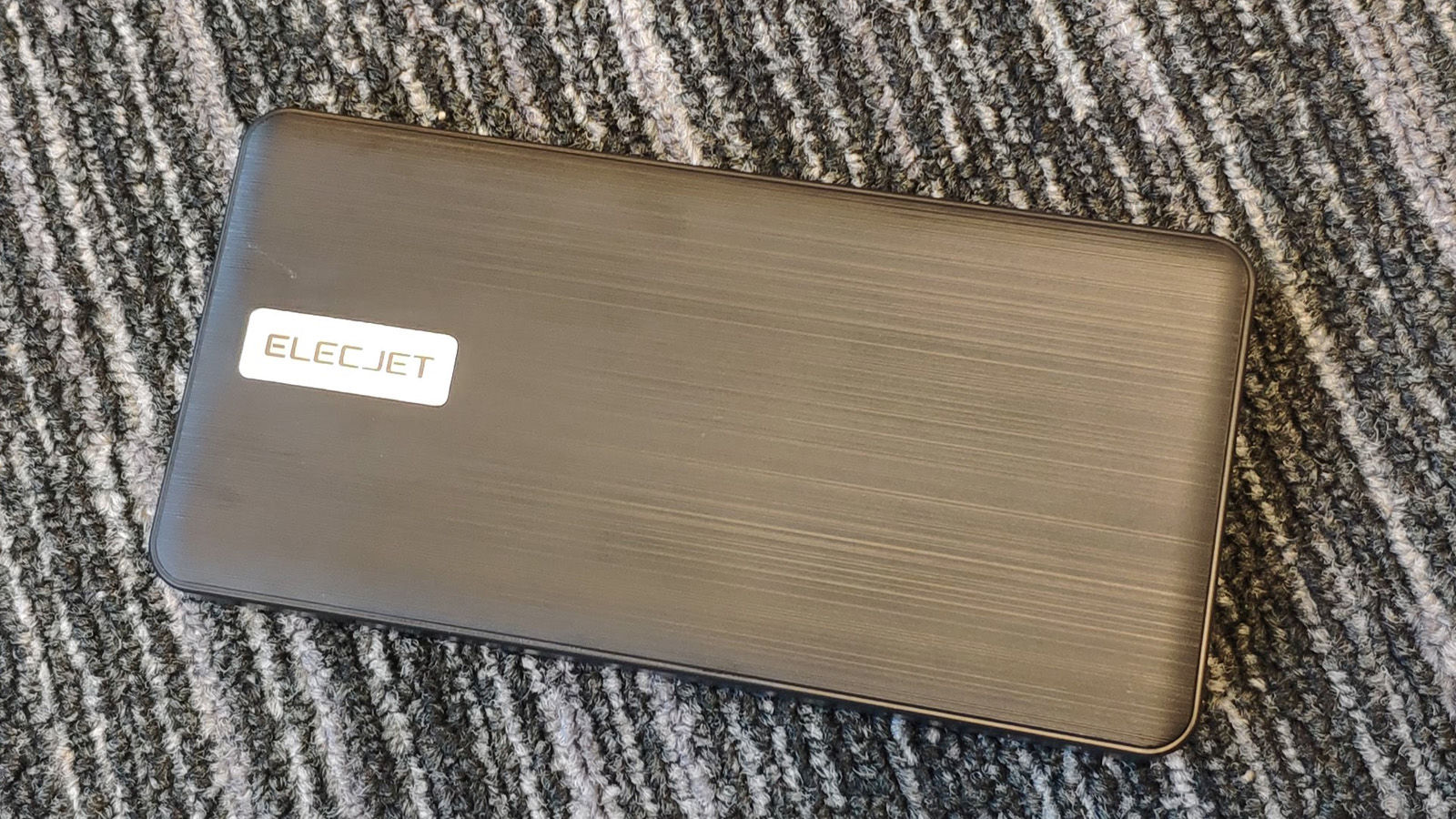 Where to buy the Apollo Traveller

This graphene power bank is currently a Kickstarter project, which makes it mildly more annoying to get hold of than if it were stocked by the likes of Amazon. The campaign runs until 20 March, but has already smashed its goal. Shipping will begin in April 2019.

Right now you can benefit from early-bird prices with 25% off the final retail price. A single Apollo Traveller power bank costs US$59 (around £46) or you can buy two for $109 (around £85).

Do note that the Apollo Traveller is not supplied with a wall charger as standard, so you’ll need to ensure you have a 60W USB-C PD charger to hit the advertised 18-minute recharge time. These can be reasonably pricey if you don’t already own one, and as an example this 65W Mackertop example costs £25.99. ( You’ll find some more options here.)

A cheaper alternative is to buy a bundle that includes such an adaptor, and for $74 (£58) you can buy the power bank with either a Fast Charging Adaptor Set, AnyWatt Set (USB-C adaptors for MagSafe 1/2 and Lenovo chargers), or USB C Car Charger Set.

Shipping is free only to the US, Japan, Hong Kong, China and Mexico. For delivery to the UK, EU, Canada, Australia, Russia, Ukraine, Thailand, Korea, Malaysia, Singapore and Norway shipping is an additional $15 (around £12). The Apollo Traveller is not available outside these territories.

All in then, with the power bank, 60W adaptor and shipping to the UK, you’re looking at a total cost of around £70. That might sound expensive, but we’ve tested power banks without the graphene tech that come close to that price. And for the speed and convenience it adds, we think it worth the money if your budget can stretch that far.

(You’ll also like our round-ups of the best power banks and best USB-C PD power banks.) 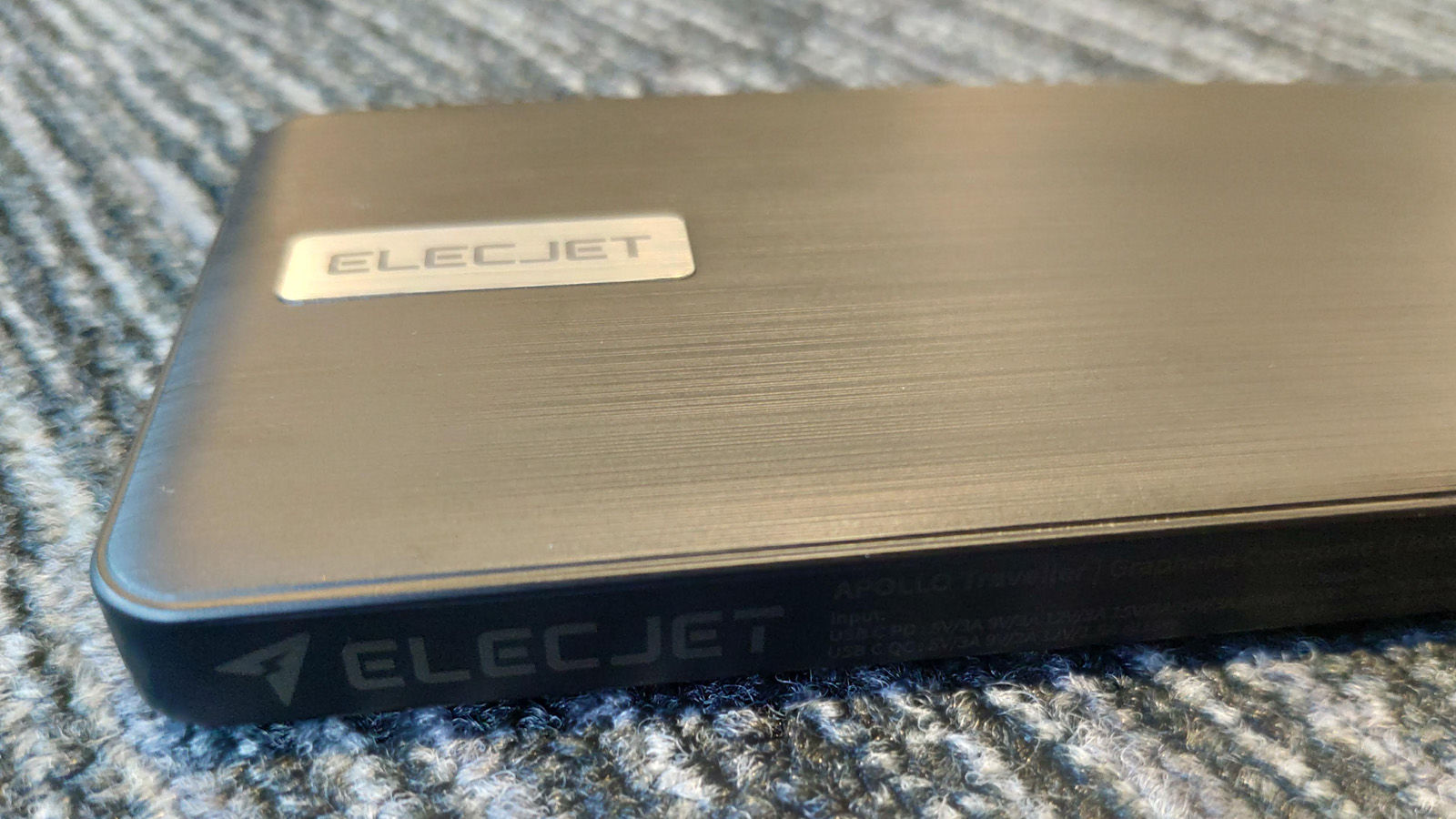 What sets apart this power bank from others is its use of a single graphene composite battery cell. Graphene has less internal resistance and is thus more adept at conducting energy, making faster charging possible.

Faster charging usually goes hand in hand with heat generation, which would typically reduce efficiency. However, the Apollo Traveller reduces heat with a graphene film cooling layer, and by resolving the issue of uneven charging across multiple battery cells.

The setup is therefore more stable, and has a suggested lifespan of 1,000 cycles over USB-C PD, and a staggering 8,000 over USB-A. Most lithium-ion power banks advertise 500 recharges by comparison.

Because the hardware inside is much more compact, Elecjet has been able to keep down the overall size and weight of this 5,000mAh bank to just 145x72x12mm and 200g. That makes it a little shorter and narrower than the Mi 8 Pro we are using to test the Apollo Traveller, but slightly chunkier.

The overall design is pleasing, a black plastic rectangular slab with textured top and rear surfaces that add aesthetic appeal and aid grip in the hand. The two ports are found at one end, a full-size USB-A output and a USB-C that operates as both input and output. It is therefore possible to charge two devices at once using the Apollo Traveller, and we found we could also simultaneously charge both the power bank and a USB-A-attached device (passthrough charging).

Charging is automatic when you attach a device, and to the side of the USB-C port you’ll find five LEDs. Four of these show you how much power remains in the bank, and the fifth is a green LED that lets you know when charging is operating above 18W. Typically speaking a LED display is more useful for getting an accurate reading, but this is more useful than the usual four-LED setup of most banks. And at this sort of capacity it’s not a deal-breaker in any case: if you’ve charged your phone at least once it’s probably time to top it up. It’s not like it’s going to take you a long time to do so.

The only other feature of note is a power button on the side, which allows you to check the capacity without plugging in a device. There is no LED torch, for example, which – let’s be honest – is a bit of a gimmicky feature anyway.