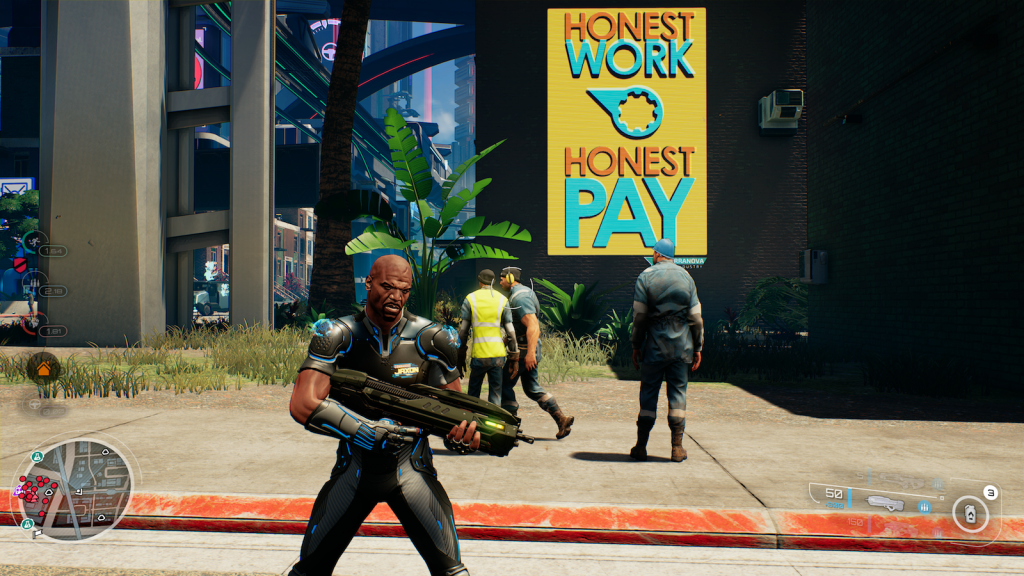 Crackdown 3 is fun to play and requires very little in terms of concentration to perform well, but at the same time, it’s fairly limited in scope and most players won’t find enough on offer to keep coming back.

Five years after the official reveal, Crackdown 3 is almost here – but has it been worth the wait? To say that the development of the game has been troubled is an understatement, with multiple delays and rumours about a huge change to the team emerging in 2018. But all that is now behind us, and Crackdown 3 is ready for its big debut, Terry Crews included.

While the game claims to bring an all-new Crackdown experience to the Xbox One, we were left underwhelmed by what’s on offer in the open-world shooter. Find out why we’re so disappointed in our Crackdown 3 review.

Crackdown 3 will be available to play worldwide on 15 February 2019 across Xbox One and PC.

It may be more expensive on the Microsoft Store, but you’ll get access to both the PC and Xbox variant with cloud-syncing between platforms as part of the Play Anywhere scheme. It’s a decent option if you play across console and PC!

Crackdown 3 goes back to basics, bringing the long-awaited title in-line with the first title in the series after an overly complex Crackdown 2. Crackdown 3 provides the core Crackdown experience, with a focus on crazy, over-the-top gunplay, explosions and increasingly weird enemies to go up against. You can even play as Terry Crews, or as he’s known in Crackdown 3, Agent Jaxon – what more could you want?

The open world game is set in the city of New Providence, following a devastating elemental attack that destroyed much of the world and left the Agency wounded. It’s your run-of-the-mill high-tech city with futuristic cars, drones, huge machinery and tall buildings that tower above you, full of things to shoot and blow up, and it’s controlled by the highly-secretive TerraNova Worldwide.

In a similar vein to the Legend of Zelda: Breath of the Wild, every area of the open world is accessible from the beginning of the game, allowing you to take on the final boss as soon as your adventure begins. It’ll be insanely hard, and chances are you’ll get your ass handed to you, but, y’know, you could if you wanted. That sense of freedom applies to much of the game, as there isn’t much of a storyline to push you in a certain direction – you just go where you want and take on missions in any order that you desire, although some are more difficult than others. 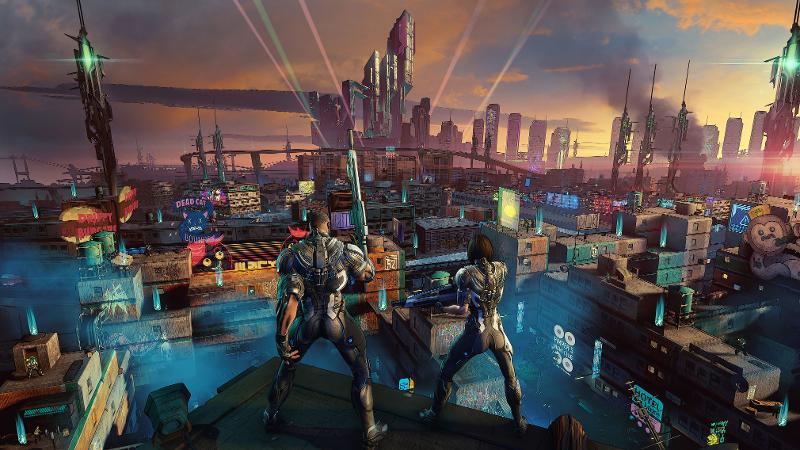 So, what do you do in Crackdown 3? You essentially make your way around the various districts of New Providence, picking off lieutenants that control various aspects of the city, including transport, manufacturing and security before taking on the head of evil megacorporation TerraNova Worldwide in a final showdown. While that sounds good on the surface, the process of taking down lieutenants is akin to something you’d expect from an Xbox 360 game.

Unlike open world games like Assassin’s Creed Odyssey or Red Dead Redemption 2 full of varied side quests and story missions, there’s no real variation in Crackdown 3. You move from marker to marker on the map, essentially shooting every enemy in sight and either defeating an officer or destroying manufacturing equipment. There’s very little in the way of tactics required as you’re essentially a one-person army, taking down tens of enemies at once while taking very little damage, so you can run in all-guns-blazing without consequence.

Cutscenes are extremely rare, and most of the story is presented in the form of comic book-style drawings. That’s fine if you’re looking for a simple OTT explosive game to blow off steam after a hard day at school or work, but it’s certainly not for those that yearn for an engaging story and variety when gaming.

As you battle enemies, you’ll upgrade your skills and unlock new upgrades. These upgrades are presented in various forms, from an upgraded jump ability to increased carry capacity for explosives and even a jump pad to get to those hard-to-reach places. The key is to balance your attacks, as you’ll have to perform skill-specific moves to get upgrade points – like drifting in a car to get driving points or blowing up a convoy to get explosive points.

This RPG-esque system forces you to switch up your style of play constantly to evenly upgrade your character, which is good because when you break it down, there isn’t much to do in Crackdown 3. It’s all shooting bad guys and blowing stuff up. If you do that over and over again using the same tactics and weapons, you’ll get bored very easily. But forcing you to focus on different skillsets to upgrade different areas of your agent, you’re forced out of your comfort zone.

There’s also a sense of progression in the city’s resident-run militia, alongside the handful of upgrades you’re offered as you level up. As you take back control of the streets and take over beacons across the city, you inspire the residents to fight back and provide backup during your escapades. While it’s only one or two NPCs initially, the number of militia fighters increases as you claw back more of the city from the evil TerraNova Worldwide.

While the campaign is.. largely underwhelming, most people have been looking forward to the online element of Crackdown 3, aka Wrecking Zone. 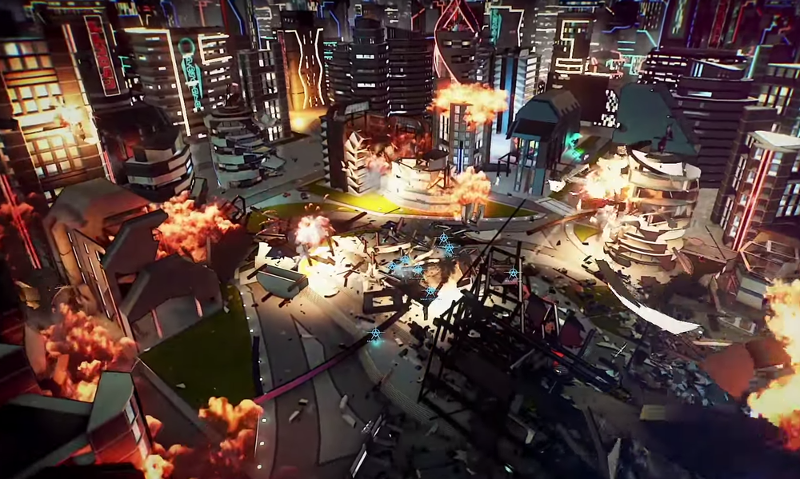 The destruction we were shown at Gamescom in 2015

It was this that devs focused the famed Gamescom 2015 presentation on, showcasing truly impressive destruction tech that utilised the power of multiple Xbox One consoles to produce something unseen before. While the environment was huge and exciting in the demo, it seems to have been scaled back – dramatically – for the launch of the game, explaining a lack of coverage since the 2015 demo.

While we were treated to a large destructible city environment in the demo, the environments across Wrecking Zone’s two PvP modes are much smaller. Granted, the environments reach high into the sky and agents can traverse the destructible environment to get the jump on enemies, but it’s all a bit… meh. We were hoping to have city-wide PvP battles where you can throw cars or even bits of debris at each other, but sadly, that’s not the case.

What you’ll get at launch are two game modes – Agent Hunter and Territories – that are essentially Kill Confirmed and Domination for those that play Call of Duty. Agent Hunter puts you in a fast-paced 5v5 match with one aim; destroying the other team.

Like in Call of Duty’s famed multiplayer mode, you have to collect a badge from downed enemies whilst also protecting your teammates’ badges from the opposing team. The first to 25 badges wins, or whoever has the most points at the end of the five-minute game win. In Territories you’ll, you guessed it, protect your territories from the opposing team, with territory locations changing constantly across the five-minute match.

The game modes are fun and the novelty of blowing up a building that an enemy is camping from is satisfying, but we’re not sure there’s enough on offer to keep fans coming back. There are no upgrades in terms of your character, no new weapons or skins to unlock and there’s not even support for Xbox Live parties so you can’t play with your friends.

Crackdown 3 is fun to play and requires very little attention to do well, making it the perfect game for those that want to come home and unwind after a hard day at school or work. But it’s not something that you’ll find yourself playing for hours at a time – we struggled to, in any case. It’s a game that you’ll play for an hour when you want to blow sh*t up and cause a bit of chaos, but nothing more.

If you’re on the market for a shooter with a live-in open world full of varied missions and an engaging campaign, maybe you should opt for Metro Exodus, Assassin’s Creed Odyssey or Red Dead Redemption 2 instead.