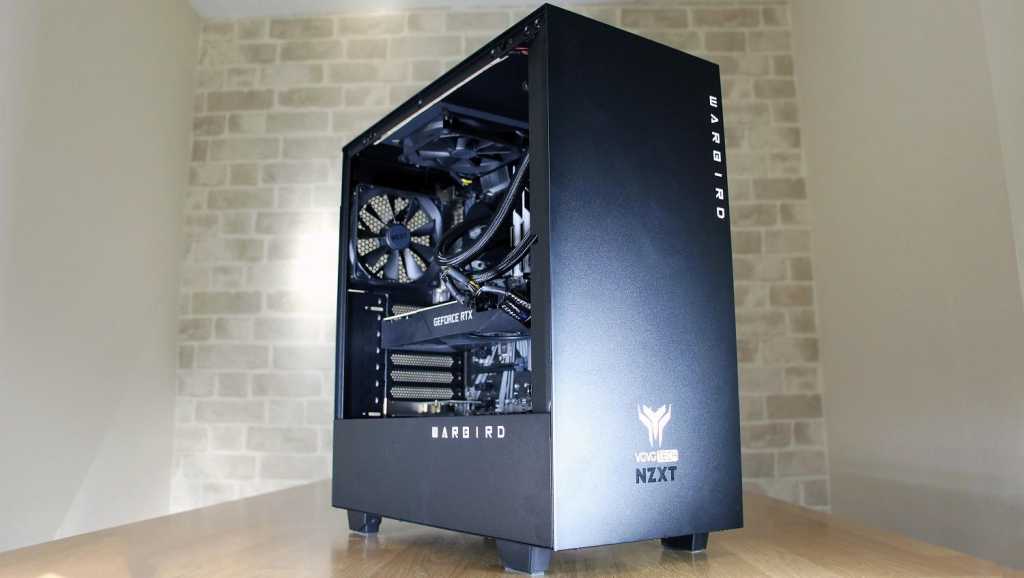 The Warbird i7S is a great option if you want an all-round PC with lashings of CPU power, but more versatility and graphical grunt can be found elsewhere if needed. The build is solid, and the rest of the specification is fine, if a little basic in areas beyond the powerful Core i7 and RTX 2070.

The Warbird i7S may have a Yoyotech logo, but this machine isn’t actually available to buy direct from the Basingstoke-based builders. If you want to get your hands on this PC, you’ll have to head to high-street retailer GAME.

The Warbird is one of ten machines that are now available from the firm – one of the UK’s most recognisable gaming retailers.

The Warbird i7S costs £1,899, and it can’t be customised when buying from the GAME website. If you do want to tweak specifications before you buy, you’re better off going to Yoyotech directly and getting a different machine.

This machine sits in the middle of Game’s Yoyotech range. It’s possible to spend under £1,500 on the Warbird i5 Ultra with its older Core i5  and last-generation Nvidia GPUs – that still offer plenty of power. Also check out the Overclockers Radiance RZ at the same price.

Alternatively, you could spend £2,500 on the Yoyotech Warbird X2 with an RTX 2080 graphics card and a Core i9-9900K processor – or £4,500 on a monstrous PUBG-themed build that includes limited-edition components and incredible water-cooled design.

Check out our chart of the  best gaming PCs.

It’s easy to be suspicious about the Warbird i7S – after all, PCs from big-brand retailers don’t have the best reputation.

Haul the Yoyotech from its box, though, and worries disappear. The NZXT H500 case is a sensible and welcome choice – it’s a popular option for mid-range builds, and it mixes good looks with solid strength and features.

The front panel is made from matte black metal, and there’s a tempered glass side panel. The front has a Yoyotech logo, and Warbird branding decorates the front and sides. You get pairs of audio jacks and USB 3.0 ports on top of the rig, but no USB Type-C.

The Yoyotech’s chassis looks just as good as the Corsair Carbide SPEC-OMEGA used by Chillblast for its Fusion Juggernaut 2080 – even though that system is £150 more expensive. There are no noticeable differences to dimensions and build quality when those two mid-tower cases are considered, either.

The NZXT looks good on the outside, and it’s decent on the inside too. The bottom is kept neat with a metal shroud that houses the PSU, the storage and many of the cables, and a red piece of metal extends from the shroud to the top of the case to keep more cables hidden.

Yoyotech has kept everything else tidy. The smaller wires at the bottom of the board immediately disappear, and the main power cables are installed discreetly. It’s just as neat around the back, where cables are tied down and routed sensibly.

At the rear you get a pair of vacant 2.5in drive bays, but Yoyotech’s usage of a 3.5in hard disk and a SATA SSD means that both hard disk bays are already occupied. This is one area where the Chillblast is better – it has three 2.5in bays and a spare hard disk bay.

A Cooler Master MasterLiquid Lite 120 cooler is installed in the front of the case alongside a single 120mm intake fan. There are two 120mm exhausts, too – one in the roof and one in the rear panel. Chillblast’s machine has better cooling thanks to its 240mm-long Corsair Hydro H100x.

And then, finally, there’s the lighting. A band of RGB LEDs sits in the roof and illuminates the hardware with a white glow. The memory sticks and the graphics card have RGB LEDs, too, but they aren’t synchronised to the roof lighting. This is only a minor issue, and the lights can be modified in software.

The Yoyotech case doesn’t do anything revolutionary, but it’s well-built, tidy and accessible. It’s got a PSU shroud, unlike the Chillblast, so it’s neater – but it doesn’t have quite as much room to grow.

The monolithic Turbo-branded GPU inside the Yoyotech is left at its stock speed, though, which means it runs with a base speed of 1,410MHz and a boost clock of 1,620MHz.

The GPU doesn’t have an overclock, but it’s not slow. It ran Total War: Warhammer II and Ghost Recon Wildlands at 1440p with averages of 61fps and 51fps – so you’ll be able to play today’s top games on 1440p and 1080p screens without compromising on graphical settings.

The RTX 2070 will also handle VR monitors, widescreen panels and every big esports game on the market without much fuss.

There’s enough grunt to handle high refresh-rate monitors, too – at 1080p and at Medium settings the RTX 2070 ran each game at 120fps or better. You may have to tweak graphics options if you want to play at a higher resolution or framerate, but there’s plenty of potential.

The RTX 2070 even handled some games at 4K – it averaged 35fps in Warhammer and 31fps in Ghost Recon with both titles at Ultra settings. However, their minimums did dip below 30fps, so you’re going to have to tweak settings if you want smooth 4K gaming in the most intensive single-player titles.

The Yoyotech’s GPU will handle everything short of consistent 4K playback. However, this is one area where the Chillblast is better. That machine has an overclocked RTX 2080, and it’s twelve frames faster in Warhammer and eight frames better in Ghost Recon. It’s a better option for 4K gaming, then.

The gulf between the two machines is illustrated in theoretical tests. The Yoyotech scored 8,279 points in the 3D Mark Time Spy benchmark – but the Chillblast is around 1,500 points faster.

Yoyotech’s PC is powered by an Intel Core i7-9700K. It’s not overclocked, but that scarcely matters: the stock speed of 3.6GHz rises to a one-core Turbo pace of 4.9GHz, and there are eight Hyper-Threaded cores.

The Core i7 processor won’t bottleneck any game, and it’ll handle the vast majority of productivity tasks – from streaming and content creation to video editing and Office tools. It’s excellent, and on paper looks better than the Chillblast’s i5-8600K– that CPU is overclocked, but it only has six cores and no Hyper-Threading.

In the single-core Geekbench test the Yoyotech scored 5,853 points – three hundred points better than the Chillblast. Its multi-core result of 26,384 was 5,500 points better, too, which is no surprise considering the Yoyotech’s CPU has two extra cores and Hyper-Threading.

The Yoyotech then scored 6,638 in the PC Mark 10 test, which is marginally quicker than the Chillblast.

It’s a great bill of health for the Yoyotech. The eight-core CPU is better than the Chillblast’s six-core chip in every situation, from demanding single-core apps to intensive multi-tasking.

The rest of the Yoyotech’s specification is fine, if unspectacular.

It’s got 16GB of DDR4 clocked to a middling 2,400MHz, and its 256GB SK Hynix SSD uses the slower SATA interface. The SSD delivers read and write speeds of 561MB/s and 518MB/s – enough pace to make the PC feel snappy, but a long way behind the Chillblast’s NVMe drive.

There are no surprises when it comes to the motherboard, either. The Asus Prime Z370-P has got enough spare memory, PCI-E and SATA ports for upgrades, and you have two free M.2 connectors.

The rear has four USB 3.1 ports and a PS/2 connector, but no USB 3 Type-C port, no upgraded networking and no wireless internet. There are only three audio jacks, too.

The board is plain, with no fancy heatsinks or RGB LEDs, and you don’t get the various on-board buttons or displays that you’ll find on pricier PCBs. There are no steel slot supports, either.

This is one area where the Chillblast is better. The Juggernaut 2080 has an Asus ROG Strix Z370-F GAMING board with chunky, metal heatsinks, RGB LEDs and enhanced audio and Ethernet. You get a USB 3 Type-C port on that board, too.

The Yoyotech has a powerful CPU and a relatively small cooler, but this PC didn’t have any thermal problems in our testing. Its peak processor temperature of 82°C is fine, and the graphics card was six degrees cooler.

It was a little loud, though, with the system producing a low rumble during games and more noise during a full-system stress-test. The noise can easily be masked with speakers or a headset, but it’s far from silent and always louder than the Chillblast.

The Yoyotech Warbird i7S is a solid system, although it’s not without its faults. The processor is the star of the show. Its eight cores and tremendous boost speeds allow it to succeed in any scenario, and it’s a better option than the overclocked chip inside the more expensive Chillblast Juggernaut 2080.

It’s arguably overkill if you want to play games, though, and money saved on a more modest CPU could have been spent on a better GPU. As it is, the RTX 2070 is a great card, but the Chillblast has a faster RTX 2080.

It’s a similar story elsewhere. The Yoyotech has solid storage and a fine motherboard, but the Chillblast is better. The Yoyotech’s chassis is good, but it’s a little on the loud side.

The Yoyotech will handle all gaming tasks short of 4K, and its muscular CPU will tackle virtually everything – so it’s a great option if you need some extra CPU power. However, if you’re a 4K gamer or just need a bit more versatility from the rest of your PC, then it’s worth saving up a little more for that Chillblast.