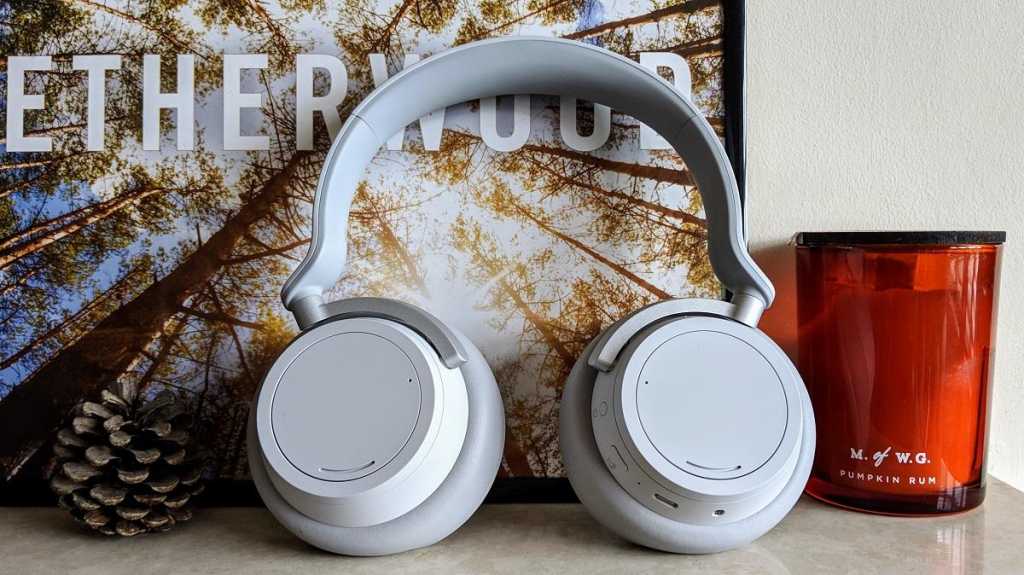 Considering Microsoft has never made headphones, these are accomplished cans.  They’re a bit grey for our taste but the Surface Headphones are extremely comfortable and have handy features like touch controls and adjustable noise cancelling. We love the smooth analogue dials. Rivals, however, offer better battery life and sound quality for the same price.

Adding to its popular range of own-brand devices, Microsoft’s Surface Headphones aim to take on the likes of Bose and Sony. Here’s our full review.

The Surface family is typically tablets and laptops, but cans are in the mix now. Microsoft says it has been working on these wireless headphones for years, but has that made them flawless?

It’s perhaps no surprise that the Surface Headphones come with a reasonably high price tag.

Matching many rivals, they’ll set you back £329 in the UK and £349 across the pond. They’re available from the Microsoft or retailers like Amazon.

One of the key elements for Microsoft when making the Surface Headphones was comfort. The design has been tweaked many times to make them as snug as possible.

These are extremely comfortable over-ear headphones, thanks largely to the memory foam on each ear cup. The headband provides a decent amount of grip without putting too much pressure on your head, which is a tricky balance to achieve. 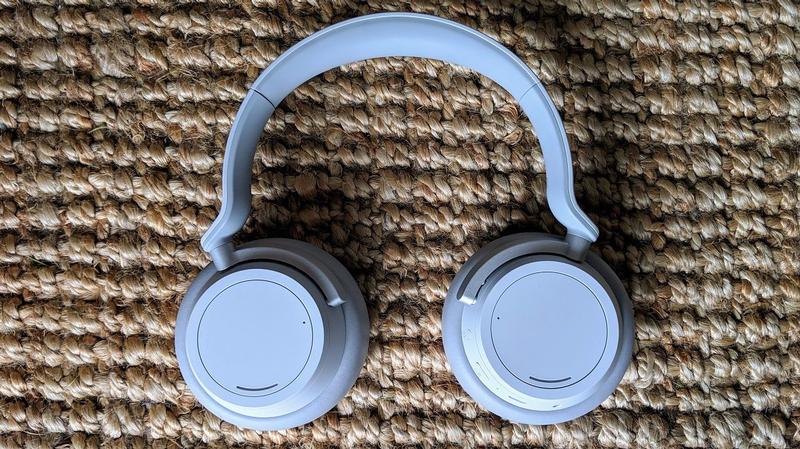 Although they don’t look breathable, the Surface Headphones are and although you’ll get hot eventually, the experience is better than we expected based on how they look.

It’s just a shame they only come in one colour, which Microsoft calls light grey.

You can control playback and calls with touch controls on the outside of the ear cup and there’s no need to remember which one does what because you can use left or right.

Like most touch sensitive controls they don’t work 100 percent of the time, but they’re responsive the vast majority of the time.

Much more satisfying are the dials on each cup which control volume (right ear) and noise cancelling (left ear). They have an extremely smooth analogue action so you’ll want to constantly adjust things just to use them.

There are only two buttons, one for power and the other to mute the microphones. 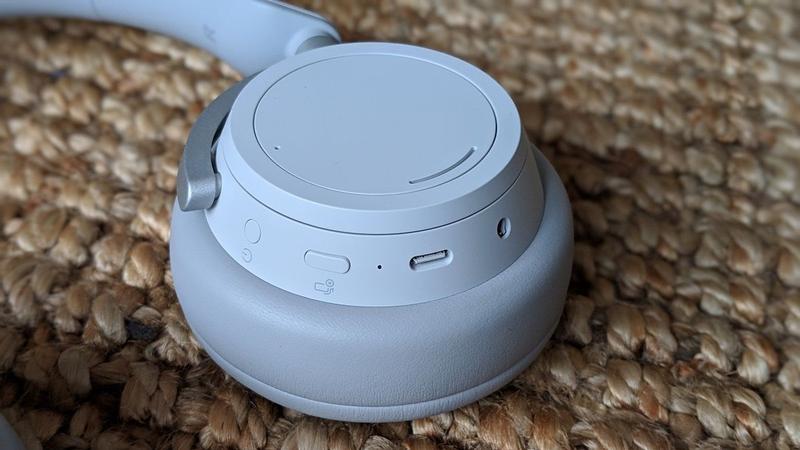 When you switch the headphones on you’ll get a pleasant voice telling you how many hours of battery life you have. We’re just not sure why the voice saying which device you’re connected to is completely different (and not so pleasant).

These are pretty compact for over-ear headphones, but they don’t fold down. The ear cups do turn sideways, which is better than nothing and you get a hard carry case, too.

The big feature here is the advanced noise cancelling the Surface Headphones offer. While a lot of headphones with this feature simply have it on or off, Microsoft allows you to adjust it.

As mentioned earlier, the dial on the left ear cup controls the noise cancelling level. At one end you can get sound from around you played through the headphones so you can have a conversation or listen to announcements without taking them off.

Then you can dial it right up when you need it most, like when travelling by train or plane. A medium level might sound a little pointless (and you won’t notice the difference in levels when sitting in a fairly quiet environment) but it can be useful when you’re out and about for a safe level of ambient sounds, like cars driving past.

As the dial turns infinitely (volume does too) you’ll get a handy beep at either end of the scale so you know you’ve reached the limit.

Like some rivals, the headphones can detect when you take them off. This means you’re music can be paused automatically. It works pretty well but it’s fairly hit and miss whether things resume once you put them back on.

It works well but we still experiences false positives. Also bear in mind that if you’re listing on a web browser then doesn’t work. 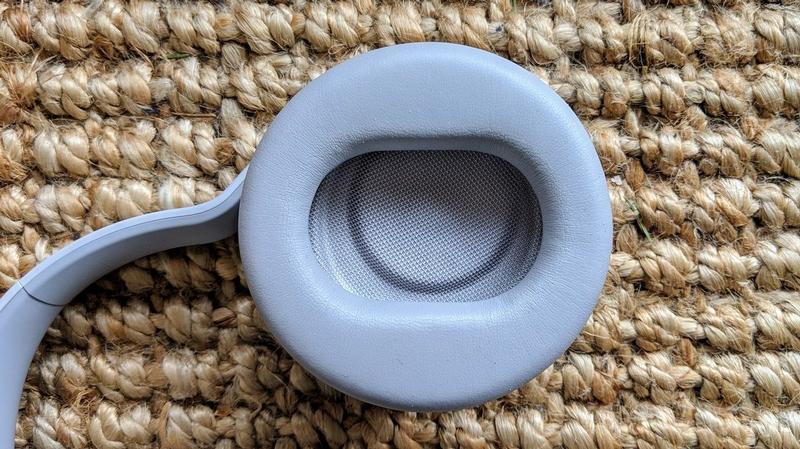 Moving onto sound quality and the Surface Headphones have 40mm ‘Free Edge’ drivers with a 20Hz-20kHz frequency response.

It’s disappointing at this price that the Surface Headphones only use Bluetooth 4.2. There’s no aptX HD or even the regular version so wireless quality could be better.

The sound quality is decent, but we can’t avoid the fact that the Surface Headphones are not quite up to the standard of similarly priced cans – partly due to the above lack of better codecs.

These headphones are all about the mid-range, which is not a bad thing. You’ll love the tone if you enjoy vocals but we’d still prefer a little more attention to the other areas of the frequency range.

There’s bass and it’s ok but lacks a punchy attack, so comes across a little soft. At the top-end things are not quite as crisp and bright as we’d expect so some tracks can sound a bit lacking in detail.

We’re nit picking here, and if you’re upgrading from some basic earbuds then the Surface Headphones will no doubt sound incredible. We just have to bear in mind that rivals are a little bit ahead in this department. 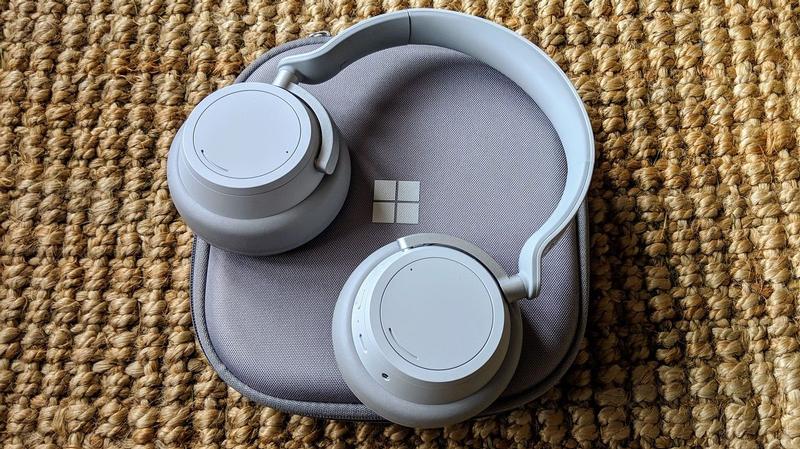 You can use the Surface Headphones with various devices with support for Windows, iOS, Android and macOS. There’s only an app for Windows and we couldn’t get it to connect to the headphones. A working mobile app would be handy if you want to switch off features like the auto pause/play when taking the headphones off and on.

When it comes to battery life you can get up to 15 hours, according to Microsoft. That’s over Bluetooth with noise cancelling on. You should get a full work day out of them or a long haul flight but rivals offer more.

The Surface Headphones charge via USB-C and fast charging means you can get an hour’s worth from a five-minute charge.

Should you run out of battery, or want to use the headphones with a non-Bluetooth source – then you can use the supplied 3.5mm jack cable.

There’s a lot to like about the Surface Headphones and for many people they will be a great buy.

We mainly love how comfortable they are, along with those oh so satisfying dials. Having adjustable noise cancelling is nice and the sound quality on offer here is good.

Touch controls and automatic sensing is also useful, but the Surface Headphones fall short of rivals in a few ways. These include battery life and wireless specs which affects sound quality. They’re also a bit grey.