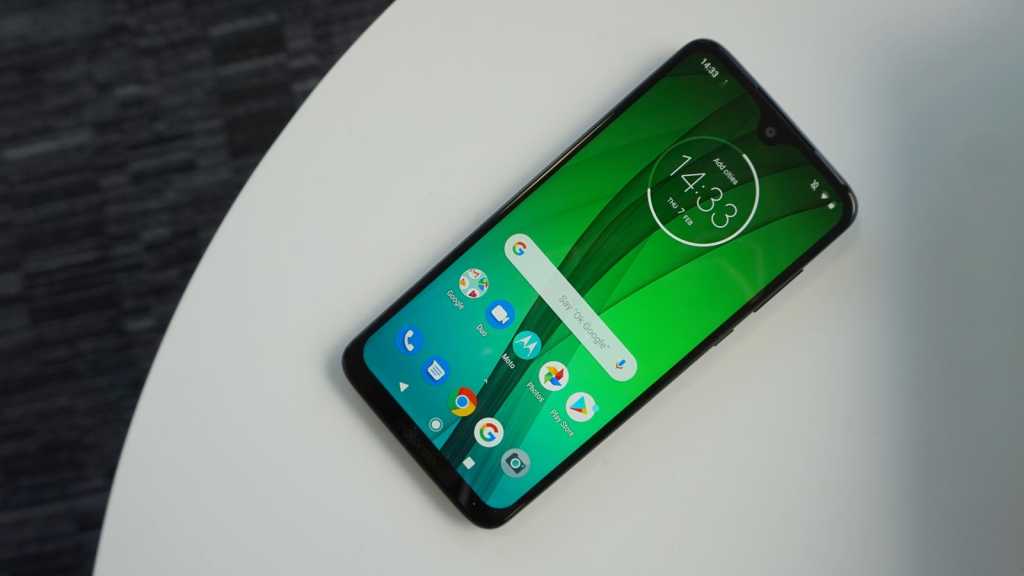 An outstanding display, clean Android 9 Pie with thoughtful Moto additions and improved cameras mean this is the best G series phone yet and the G7 phone you should buy. There are three other G7 phones in the series but the G7’s price and features mean it’s the best for most people. Tad annoying it’s an Amazon exclusive in the UK, though.

We’ve always loved the Moto G series. It has long represented true smartphone value, and still does in an age where the high end now tops out at over £1,000 or $1,000. Yikes.

Much more reasonable is the £239 / $299 Moto G7. The flagship device of a four-phone G7 line up that all have notches (G7 Play, G7 Power and G7 Plus are the others), it promises better cameras and more new features besides.

It’s the best Moto G phone ever and represents true value with hardly any compromise in the low end phone market. It’s giving OnePlus a run for its money now.

Unlike any of the other G7 series phones the G7 itself is an Amazon exclusive in the UK. This is a tad annoying if you were planning on getting the phone on contract as it means you can only buy it outright and SIM free.

On the plus side, hopefully you can stretch to £239. It’s a good price and gets you a lot of phone that will last, and you’re not tied into a long term contract.

In the US the phone retails at $299 and is available from Amazon,  Walmart and Best Buy.

More so than ever this G series phone proves you can spend half or even a quarter of  the best smartphones and still get absolutely everything you could want, even if it is at slightly lower quality (screen, processor, build quality).

But it’s hard not to be bowled away with how good the G7 is. Our first impression of the display was incredulity at how great it looks for the price. It’s a 19:9 6.2in Full HD+ LCD screen and wouldn’t look out of place on a phone that cost tons more.

You don’t get an OLED display for the asking price, but the LCD has good, if slightly soft, colour reproduction and is pin sharp to our eyes.

There’s a teardrop notch at the top of the screen for the 8Mp camera with dual 12Mp + 5Mp sensors on the back. The rear cameras still don’t have optical image stabilisation (OIS) but this can be got for £30 more on the G7 Plus in the UK, but it’s mystifyingly not available in the States.

You might not expect a premium glass construction for the price, but it’s what you get.

It doesn’t feel cheap by any means and has Gorilla Glass 3 on the front but not the back, so you might want a case to protect it – and you get one in the box. Nice one, Moto.

On the back are the dual cameras with a circular M logo that doubles up as a fingerprint sensor and is a fine piece of product design. Yes, we are nerds. But it also means the fingerprint sensor on the front of the G6 that took up screen space now makes space for, yup, more screen on the G7.

It’s things like wireless charging that the G7 cuts, along with waterproofing. But really, you can live without these two things, and the phone does have a P2i water repellent coating so you’ll be fine in light rain.

The speaker is pretty good, but only for podcasts and radio. Watching video is fine too for short periods though it’s easy to cover it as it’s on the bottom. We also found the minimum volume is actually a bit too loud.

There’s NFC for mobile payments, but oddly only in Europe – the US G7 does not have NFC. All versions do have Dolby audio for the first time on a G series phone and fun additions like smile detection on the selfie camera to take the photo when you bare yer gnashers. We found it pretty hard to make this work without doing a pretty fake toothy smile but you might fare better.

The rear cameras are good for the price range but let’s not pretend they are anywhere near the quality of a premium smartphone. The best cameras you can get on a sub-£500 phone at the time of release of the G7 is on the Honor View 20 (£499) so the money you save on the G7 is for a reason.

The 12Mp main sensor is paired with a 5Mp sensor that allows portrait mode shots, though the 8Mp camera can also do it with patchy results.

Outdoor shots in daylight come out well on all cameras, though colour reproduction is sometimes a tad over saturated, often struggling with reds and oranges. But as you’d expect it’s in low light that the Moto G7 shows that it’s a lower end phone, with a lot of noise in darker areas where the sensors simply can’t cope.

If blur bothers you then you’re going to get quite a lot of it without OIS here. The G7 Plus adds OIS and might be better for you.

But hey, the G7 costs £239, so you know you’re losing out on perfection somewhere. Check out the gallery below of G7 shots (you my have to click to view):

One of the best things about the G7 is the software. Not only does it seem to run excellently on the adequate and by no means low end Snapdragon 632 processor, but it runs Android 9 Pie, the latest version that some high end phones don’t even have yet.

You can’t rely on the Moto G7 to play high end graphically intense games like Fortnite, though it did cope with some blasts of Asphalt 9.

Moto wisely only adds neat touches to a very stock experience that you can turn off if you don’t want them. We’re a million miles from the heavily changed skins of Huawei here.

We like things like raise to face unlock, double twist to open the camera and flip to mute but this is just the surface of how to interact with the G7, all customisable within the preloaded Moto app. It’s an impressive set of extras on a phone of this price.

Unlike the Motorola One the G7 doesn’t run Android One so it is not guaranteed monthly software security updates though in our experience, Moto is pretty good at updating its latest phones for a year or two. Don’t bank on the G7 getting an update to Android Q, though.

The G7 comes with a 15W fast charger in the box – Moto here are outdoing Apple, the latter does not include a fast charger with any of its fast charge compatible iPhones.

It charges a 3,000mAh cell that is more than enough for the phone. In our testing it comfortably lasted a whole day of use and well into a second day. If you really want more power, take a look at the 5,000mAh battery on the G7 Power instead.

As the above screenshots of the software show, you can also replace the three android navigation buttons with Moto’s own take on gesture navigation. We really like the pill shaped button with a tap to go home, swipe right to switch apps, swipe up to see all apps open and swipe left to go back in app. It is, dare we say it, better than Google’s own version on its Pixel phones.

Moto has a winner with the G7. While the company’s more expensive phones tend to not justify their higher prices, the G series is a bastion of smartphone consistency and the G7 is the best Moto G yet.

With better cameras, a fine display and an efficient but not underpowered processor we think the G7 could be one of the phones of the year, not just one of the best mid-range phones.

It’s just a shame that it won’t get many column inches in comparison to phones that cost four times as much. Spoiler: those phones don’t do an awful lot more useful than the G7 does for £239 / $299.