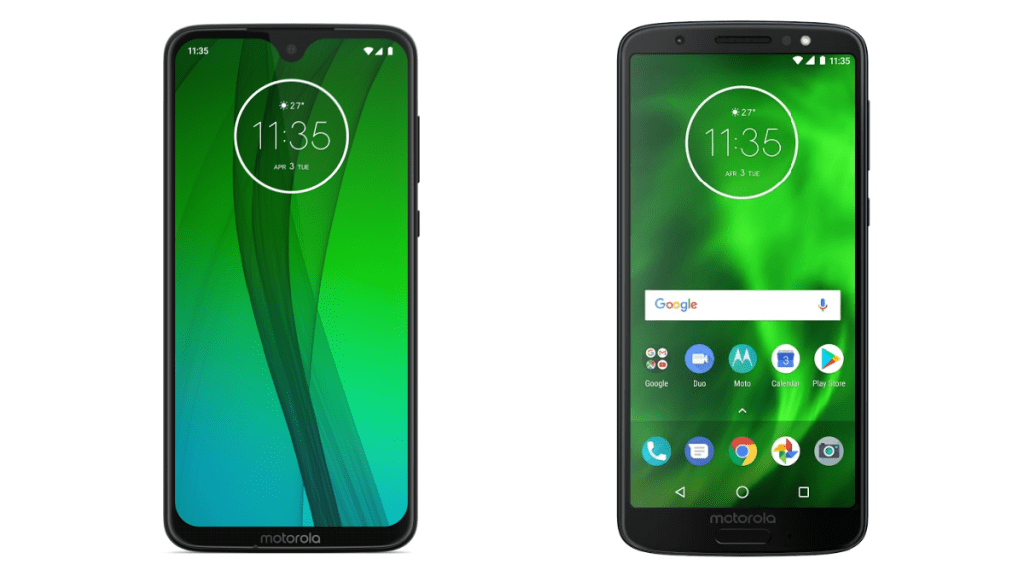 The Moto G7 might be a little more expensive than the G6, but it bring with it a number of upgrades including a larger screen, new processor, 4K video recording and more. A lot of specs and design traits do remain the same so G6 owners might not feel the urge to upgrade too strongly. If you’re deciding between them, you may as well get the newer model unless you see the G6 at a great price.

Motorola is famed for its affordable smartphones and its Moto G range continues into 2019 with new models. Here we compare the Moto G7 with its predecessor, the Moto G6 to see how the phones differ in price, design and specs.

The Moto G6 launched at £219 putting it just outside the budget phone market. The G7 is a little more expensive at £239, so a small jump but there are quite a few upgrades as we’ll explain.

There are also Play, Plus and Power models of the G7 but we’re focusing on the regular option here. Read about the full Moto G7 range. Also check out the best Moto G7 deals.

You’ll have to buy the G7 from Amazon where it is exclusive, not just a particular spec with more memory and storage.

It was the Moto G6 that got something of a design overhaul last year, so it’s not a huge surprise that the Moto G7 is pretty similar.

There are some tweaks though, so you’ll notice that the screen has become even taller. The firm moved to an 18:9 aspect ratio with the G6 and has now gone to 19:9 for the G7.

This not only moves the fingerprint scanner to the rear, but also means a notch at the top of the display. In a rounded waterdrop style, it goes round the front facing camera.

With it’s bigger size, the G7 a little heaver than the G6 at 172g, but a increase of 5g isn’t very significant.

Other design aspects are largely the same with a USB-C port, headphone jack, glass rear cover and a P2i water repellent coating.

It’s worth noting that the G7, at the time of writing, only comes in black or white. A shame considering how nice the G6 looks in Deep Indigo.

As already mentioned, the screen is one of the biggest changes here with it’s 19:9 aspect ratio. It’s now 6.2in which is 0.5in larger than the G6 on the diagonal. The resolution is marginally higher because the display is taller but the extra real estate means the pixel density is down a touch.

Nothing you’ll notice though, especially with the introduction of a notch. Motorola has shunned this trend in the past but has introduced it here to fit the display round the camera. In our opinion, the notch on the G7 is one of the more attractive ones around.

There are upgrades in the engine room with a Qualcomm Snapdragon 632. It’s also octa-core but Motorola says the phone is 50 percent faster than last year. It might be comparing it to the lower spec G6 though, as the G7 comes with 4GB of RAM as standard.

There’s also double the storage as standard at 64GB and you can put a 512GB microSD card in. All of this easily justifies the £20 price increase.

Moving onto cameras and the phones look pretty identical on paper with the same dual rear cameras. However, the G7 can now record video in 4K. Things remain at 8Mp for the front facing selfie camera.

Remaining specs are matching, with no move to Bluetooth 5.0, wireless charging or similar. You do get Android 9.0 Pie, of course but the Moto G6 will get an update we expect.

See below for a full specs comparison of the Moto G7 and Moto G6:

As we expected, the Moto G7 is very similar phone to the G6 so if you already have last year’s phone then you might not be eager to upgrade.

It depends if you’re bothered about things like a larger screen (with a notch), a faster processor and 4K video recording.

Coming at this if you don’t own a G6 means you might as well get the newer G7 for just £20 more, benefiting from the above as well as the additional memory and storage as standard alongside the latest Android software.