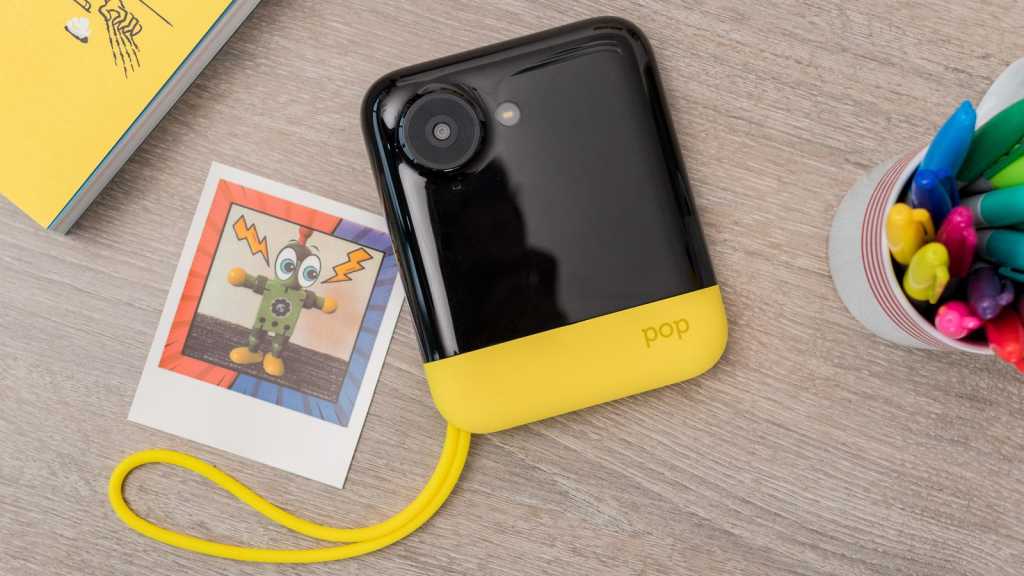 The Polaroid Pop is part of Polaroid line of instant cameras and printers that use the Zink format – zero-ink – to quickly print small-scale digital photos – as opposed to the genuine film prints you’ll find from Polaroid Originals (a separate company, confusingly) cameras like the OneStep+.

Zink lacks some of the charm of proper film, but there are advantages too: it’s cheaper, for one, but it also lets you apply a range of filters and effects to photos ahead of printing, and use the camera to create gifs and video too. Since the Pop then prints in the classic square Polaroid format – complete with an oversized bottom border – it’s clear it’s trying to strike a middle-ground between nostalgia and modernity.

The Polaroid Pop retails for £199.99/$199.99, which is a steep starting point. It’s more than double the smaller £89.99/$89.99 Polaroid Snap, and more than almost every real film instant camera made by either Polaroid Originals or Fujifilm Instax.

The prints aren’t all that cheap either. One of the benefits of Zink cameras is that the paper is usually less costly than the film used by Instax, but at £9.99/$9.99 for a pack of 10 prints, this is about the same price. Prices drop as you buy more, but not by enough to really justify the quality compromises involved in Zink over film.

To look at it, you’d be forgiven for assuming that the Polaroid Pop is a toy. While the main body is black the bottom quarter is a solid pop of bright colour – yellow in our case, though there are six available – with an optional matching thick plastic wrist strap.

The front has a large cutout for the lens, with flash next to it, though is otherwise uninterrupted, while the back boasts a small touchscreen and a big red shutter button – continuing the toy-esque feel. Paper is loaded from underneath the coloured section, which pops off and holds in place magnetically, and prints come out from the top.

At 454g the Pop is surprisingly heavy, and at 15cm tall it isn’t especially compact either – a necessity of the larger Polaroid prints. Still, it means you’ll definitely need to make space to lug this thing around with you, and you’re not likely to forget that it’s on you.

The other big downside of the design is that the glossy black plastic picks up both smudges and micro-abrasions like anybody’s business. Within just a few days of using the Pop it’s already coated in smudge marks and tiny scratches – just from carrying it around in a rucksack. The glossy finish is pretty slippy too, so you might want to make sure you use that wrist strap.

How about the actual camera though? It’s safe to say that in terms of pure photo quality, the Pop is unlikely to wow anyone. Colours are fairly muted, detailing is fairly poor, and it seriously struggles with either low-light or moving subjects.

All of that is covered up to some extent by the format of course – at just a few inches across, the prints will hide a lot of the camera’s failings by virtue of their sheer size. They bring in their own issues though, with the Zink printing occasionally introducing streaking and colour banding, while washing colours out even more in the process. It’s also slow, and makes a succession of juddering, grinding noises as it goes about printing shots.

You might think that low resolutions and faded colours are just par for the course with instant cameras, and to some extent that’s true. But there are few we’ve reviewed that seem to struggle this much with colour saturation or blurring with moving subjects, and it severely limits the Pop’s potential appeal – especially at £200/$200.

Where the Pop stands out slightly is in its additional features. For one, you can add a variety of filters, borders, and stickers to your images to liven them up a little. Serious photographers won’t take much interest, but kids will find the options fun, and it could add an extra quirk to photos if you want the camera for a party or wedding.

You can also use the Pop to create gifs or shoot video, with a similar range of potential effects. The problem here is that it’s hard to know why anyone would. It’s not like you can print them, so all you can do is send them to your phone – but odds are your phone camera will already blow the Pop away, and there are free apps with way more options for special effects.

You can also use the built-in Wi-Fi to send photos and videos from the Pop to your phone or tablet using the free Android and iOS app, or in reverse – to send existing photos to the Pop to use it as a printer. You can even add the Pop’s various borders and filters to those photos before you print.

Using Wi-Fi as opposed to Bluetooth means that transfers are pretty quick, but the process is fiddly – you’ll have to disconnect your phone from the regular Wi-Fi and connect it to the Pop’s own Wi-Fi network to transfer any images or videos, which will take a minute or two.

If you want to post one of the Pop’s photos on Instagram, for example, you’ll have to connect your phone to the Pop Wi-Fi, use the Pop’s own controls to send the photo, hit accept on your phone, then disconnect from the Pop Wi-Fi and go back to your regular connection, and then finally share it online. Or you could just take the photo on your phone in the first place.

The chunky, colourful aesthetic might appeal to kids, and it could be a great purchase for pre-teens who don’t have their own smartphone but want to play around with photos and filters. But at £200/$200 – and more for prints – it’ll be a tough sell for parents. Not least because, again, you could buy another model for half the price.