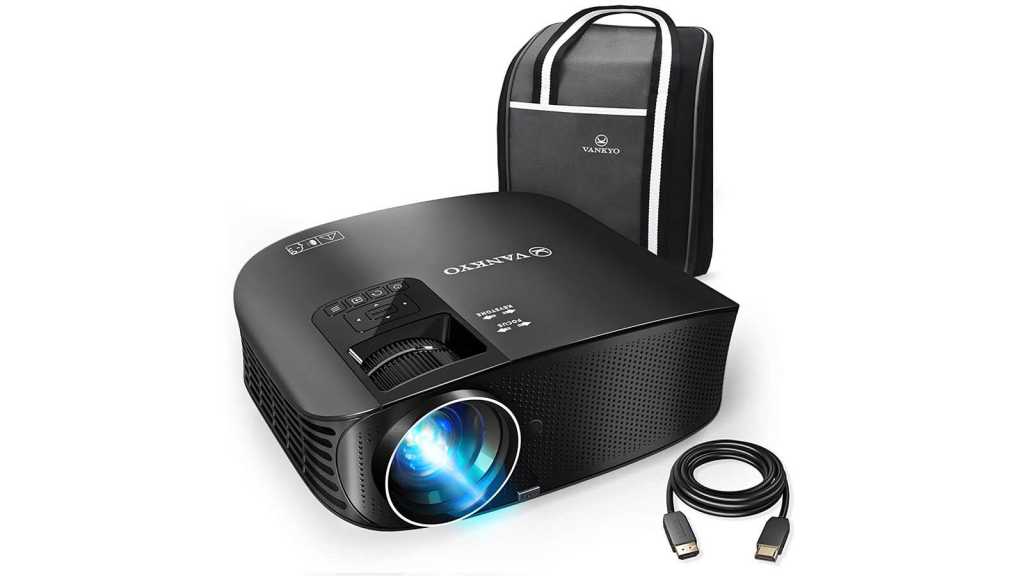 A projector this cheap should be pretty disappointing but Vankyo has made an impressive home cinema machine. We’re let down by the 1080p claim, but performance is still very good and the Leisure 510 has lots of good features making it a great budget choice for your lounge.

With the cost of big TVs in free fall, those that make projectors are trying to occupy those parts of the market that LCD panels don’t address. Very large screens are a potential niche, as the cost of a TV bigger than 55 inches is prohibitive.

Vankyo is one of several Chinese projector makers that are creating entirely new markets for these products with incredibly cheap projectors that can offer massive images for those that like to make ‘movie night’ a bit special.

Vankyo sent over its incredibly priced Leisure 510, so we got out the popcorn and put our feet up for a few hours.

In Europe, the Vankyo Leisure 510 is available from multiple online retailers such as Amazon for £159.99 and can be got for a few pounds less. It is available in the USA for a little bit more at $189.99.

The pricing matches the seemingly identical ELEPHAS Projector, the WiMiUS P18 and it undercuts the £209.99 ABOX 4000. Almost every projector at this price point is Chinese made, as branded designs are much more.

Check out our best projectors chart.

There is a sizeable elephant in the Leisure 510 room that we’d like to deal with before getting into the rest of the review, and that’s the words ‘Full HD 1080p’. It’s on the box, and it’s on the Vanyo website. But whatever it says, this projector has a natural resolution of just 1280 x 768.

Yes, the projector can accept a 1080p input and scale it to 1280 x 768, but that doesn’t make it a 1080p projector, with all due respect. Throwing away nearly 50 percent of the pixels from the source signal isn’t the same as being 1080p natively.

We wish hardware makers wouldn’t do this. It creates the perception that they’re looking to mislead people, even if that isn’t their intention.

That issue aside, what we’ve got here is a sturdily constructed projector, that comes in either white or black, that can output an image up to 200in using an LED bulb and some sizeable optics.

Vankyo sent the black model for us to review, which contrary to its promotional images it is dark battleship grey on the top and bottom only gloss black in the centre section.

It comes in an attractive soft carry case that included a small remote, HDMI cable, power cable, user manuals and AV phono leads. Unusually, the remote didn’t come with any batteries and needs a couple of the AAA variety.

The projector is a substantial object that weighs 2.5kg, measuring 310 x 239 x 117mm. All the inputs are along the rear top edge, and the designer was very mindful of overheating given the number of vents on all sides put the top.

The upper surface has a recess that enables you to make manual focus and keystone adjustments, and a small selection of buttons for navigating the various menu settings. These buttons are all duplicated on the remote, which is convenient if you’re ceiling-mount it.

As the keystone can only be modified vertically, and there is no zoom function in the optics, this limits where you can place the projector to get the desired image size and position.

While the Leisure 510 wouldn’t classify as a ‘short throw’ design, for most sized rooms the 1:1.3 ratio is workable. The shortest focus distance is 4.9ft equating to a 44in display, to achieve 98in you need to move back to 9.8ft, and 18.4ft back produces a gargantuan 200in image.

Another limitation is that there aren’t any threaded holes or other mounting points on the underside, meaning that a tray or shelf design of support will be needed if you want it up high.

For table placement, a spring-loaded foot can be deployed from the underside to achieve a raised angle the distortion of which can subsequently counter with the vertical keystone control.

A strong point of this design is the number of inputs it has available. These include the seemingly mandatory VGA, two HDMI and Composite RCA in.

There are two USB ports, one of those being primarily to provide power for a streaming device, like the Google Chromecast. The ports can also be used to insert a thumb drive with media files on it, with a wide selection including MKV being supported.

The big caveat to the USB device playback, and it also impacts on the microSD card slot, is that the only format it reads is FAT32. In our tests it ignored NTFS and FATex, dictating the size of any video file to a maximum of 2GB, the FAT32 file size limit.

Let’s get the truly shocking news out of the way first; this is a good projector, and it would still be fine if the price were higher. The image is crisp, has good contrast and the colour saturation is also decent.

Vankyo quote 3,600 Lux for the brightness which in our tests appeared be slightly optimistic. But, configured for a 50in indoor projection on a suitable screen or white painted wall it works fine in daylight. You only need to reduce the natural lighting if you want 100in or bigger display.

Our only issue with the quality of video output, for this resolution, is a tiny amount of light bleed around the top and left edges. It’s not terrible, but once pointed out, you can’t easily ignore it.

Another surprise is that the 3W speakers in this unit are much better than we’d anticipated. The output is stereo, and unless you insist on six channel Dolby surround with every screening, these are more than adequate.

They also help to block out the sound of the internal fans that are one of the less desirable aspects of this design. In our testing, depending on the direction you are from the unit fan noise is between 22dB and 29dB. Although, it should also be mentioned that the fan is constant and doesn’t ramp in the distracting way that some projectors tend to as they get hot.

The lifespan of the bulb at 50,000 hours is equivalent to four hours a day for 34 years, and Vankyo has promised to make replacements available.

The quality and value of the Vankyo Leisure 510 for such a modest cost is exceptional.

No, it isn’t true 1080p, and it’s a little noisy, and there isn’t an easy way to ceiling mount it. But none of these factors makes this projector anything less than a highly serviceable and remarkably durable machine.

We’ve been told that Vankyo has a true 1080p projector in the works, and based on the Leisure 510, we’ll be keen to see if that can deliver the same level of value when it appears.