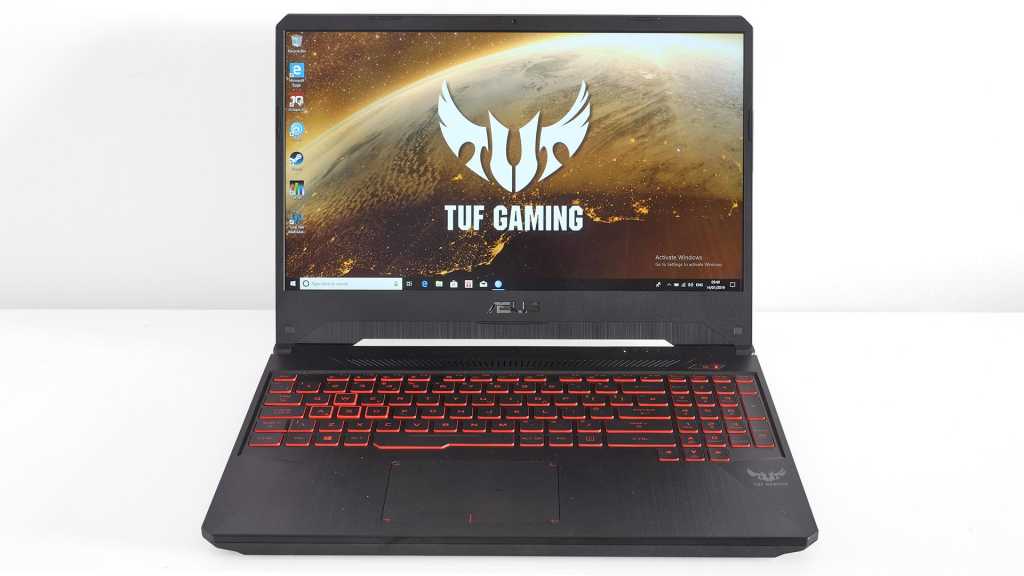 Gaming laptops don’t have to break the bank and Asus has proven this nicely with the TUF Gaming FX505. It might not have all the bells and whistles like fancy lighting, but decent all-round build and specs mean you get solid Full HD performance in a full-size laptop that can travel with you.

High-end tech can become scarily expensive. Top phones, TVs and, yes, gaming laptops often have price tags that seem fantasy land stuff to many of us. Some phones cost more than half-decent first cars. It’s a reality. The Asus TUF Gaming FX505DY is one of the best models to look to if you like to see tech prices firmly rooted to reality.

This means it’s a similar price to the Dell G3 15 with roughly comparable specs. Amazon has it available to order at just under £700. You can also order from Amazon US.

Our review model has some significant upgrades, but as the CPU and GPU remain the same, most of the impressions here will also apply to the base version. This spec has 16GB RAM, a 512GB SSD and a 1TB hard drive.

Asus has pulled off a clever marketing trick with the TUF Gaming FX505. Its exterior is plastic, lacking the aluminium panels found in some higher-price models, but Asus sells this design to us as “tough” rather than “basic”.

These claims are based on MIL-STD 810G testing, standards set by the US military. Whenever you see this impressive-sounding jargon, you might want to look a little deeper into what it actually means. There are absolutely loads of MIL-STD 810G tests, and consumer tech will usually have only been submitted to a few of them.

In the FX505’s case, Asus says the laptop was tested for vibration, shock force, high altitude, temperature and humidity. We couldn’t find any mention of liquids testing, so keep that glass of  well away from the keyboard. Some laptops, particularly those made with the classroom in mind, do actually have reservoirs under the keyboard to keep water from damaging the internals.

The Asus TUF Gaming FX505DY does have some of the hardy feel of one of those education-geared laptops, though. Its plastics are fairly tough, refusing to bend significantly under normal-use pressure. And, contrary to some reports from the US (which may have been from pre-production models), there’s no major flex to the keyboard base. This is the area in which a build shortfall becomes most obvious when you actually use a laptop.

Asus has done its best to make the TUG Gaming FX505DY entirely practical, without entirely getting rid of the gamer hallmarks some want. For example, there are no LED lights on its lid or sides. But the Asus logo on the back is red, rather than white or black. Keyboard lettering is red too, and all the main plastic panels have a faux brushed aluminium finish.

Trying to make bare plastic look like brushed aluminium never works that well. However, subtlety is not the aim here. Asus was out to give the TUF Gaming FX505DY a distinct “gamer” look using conventional lower-cost laptop materials. And it has done just that.

A fairly conventional core design also makes the Asus TUF Gaming FX505DY much more portable than many gaming laptops. It’s 26.8mm thick and weighs 2.2kg. This is clearly not an ultraportable, but occasionally carrying it around in a rucksack won’t fill you with instant regret.

There is an extra feature in the keyboard. The Asus TUF Gaming FX505DY has 1.8mm keystroke action, much deeper than the average thin and light model.

Key action is on the soft side, though, so you don’t get the lightning fast feel of the best gaming keyboards around. It’s not a star, but is reasonable, and buoyed by the relative lack of flex thanks to, we imagine, a stabilising backplate underneath the keys.

There’s plenty of gamer character here too. The lettering and side of the keys are red, which gives the multi-level backlight a pleasant hue – if you’re into that kind of thing. Unlike some gamer models, you can’t change the colour of the keyboard light.

As a 15.6in laptop, there’s room for a full NUM pad to the side of the main keys.

The trackpad is just what you’d expect of a keenly-priced laptop. Its surface is plastic rather than glass, and the click action does not seem carefully engineered for very fast input. You’ll probably want to use a mouse most of the time, particularly as the pad’s non-central positioning makes it less comfortable to use.

There’s also just a hint of pre-click movement to the pad. Again: not ideal. The experience of using it is acceptable, though.

The Asus TUF Gaming FX505DY has a 15.6in screen whose qualities are a slightly mixed bag. But the highlights make this display a perfect fit for indoors gaming and movie-watching.

These highlights are contrast and the screen finish. ANSI contrast of 1431:1 gives the Asus TUF Gaming FX505DY a rich, bold look, and the matt surface stops reflections from light fixtures from becoming too much of an annoyance.

Resolution is, as many of you may have guessed, 1920 x 1080 pixels. There’s very little merit to a laptop like this having higher pixel density. The entry-level and lower-mid range GPUs available at the price cannot handle much 1440p or 4K gaming without a far-too-great trade off in texture and visual effect quality.

The lesser parts of the Asus TUF Gaming FX505DY are not downright bad, but do show the IPS panel used is at best low-mid-range. It covers just 61.6 percent of the sRGB colour gamut, 43.8 percent of DCI P3 and 42.7 percent of Adobe RGB. As such, the laptop cannot render particularly vivid tones. The perceptual impact of this is lessened by the very good contrast, though. We think it looks better than this relatively lowly colour result might suggest. Pretty satisfying, actually.

But if you have a side line in image or photo editing, or design, the Asus TUF Gaming FX505DY probably isn’t for you.

Maximum brightness does not impress either, at 244cd/m2. Even with a matt finish, the display won’t be particularly clear when contending with lots of ambient light. Keep the Asus TUF Gaming FX505DY indoors.

Like just about every gaming laptop, the display is non-touch and the hinge only folds back to the usual 130 degrees or so. This screen is no technical marvel, but the IPS panel and strong contrast make it generally satisfying for games and movies.

There are several different kinds of Asus TUF Gaming FX505. Ours is the most unusual as it has an AMD rather than an Intel CPU. It’s the AMD Ryzen 5 3550H, a quad core, eight thread chip with a base clock of 1.2GHz and a Turbo of up to 3.7GHz. As of January 2019, it’s brand new.

It scores slightly better than the popular Intel Core i5-8250U in benchmarks, with 12469 (3938 per core) in Geekbench 4 and 4091 in PCMark 10. If you used to dismiss AMD CPUs as weaklings next to Intel’s, it is time to revise your opinions.

The Asus TUF Gaming FX505DY has enough power to act as a desktop replacer for some people. However, be mindful of the storage option you go for. This laptop will be sold with SSDs and hard drives with an SSD portion to speed up Windows 10. However, if you will need to juggle a lot of data quickly, an SSD will always be much faster.

Our review unit has a 500GB SSD and 1TB hard drive. We’ve been spoilt. For best budget performance, look for a model with a 256GB SSD. An SSHD offers much more storage for your money, but you will see some drop in day-to-day Windows 10 performance.

The AMD processor has Vega 8 graphics baked-baked-in but Asus adds an AMD Radeon RX 560X. This is comparable with, but a little less powerful than, an Nvidia GTX 1050. The Asus TUF Gaming FX505DY manages 33.4fps in Total War: Warhammer at medium settings (19.3fps at ultra) and 31fps in Ghost Recon: Wildlands (17.2fps ultra).

You won’t be able to max out all the graphics settings in recent demanding games. But you the Asus TUF Gaming FX505DY should play them at well 1080p with mid-level settings, or “high” in some cases, particularly if you forego power-intensive extras like Nvidia Hairworks. That’s hair modelling tech used in some high-high-profile games like The Witcher 3 and Far Cry 4.

The Asus TUF Gaming FX505DY offers a few different performance profiles as part of its Armoury Crate app. However, the slight CPU overclock this seems to offer does not affect gaming performance. It’s still useful, though, letting you tailor fan behaviour for longer sessions.

Under pressure the Asus TUF Gaming FX505DY creates a decent amount of noise, but you can tell it’s the noise of a set of larger diameter fans made for performance machines. Slim and light laptops with gamer internals tend to sound higher-pitch, and more distracting.

Heat dissipation is acceptable. The middle of the keyboard gets warm after a while, although the WSAD and other most commonly used areas seem to be the last to heat up.

Laptops like the Asus TUF Gaming FX505DY are rarely made for long battery life. They love being plugged in.

The battery is a 48Wh cell, a little smaller than the 56Wh unit Dell uses in its G3 Gaming laptop. In our testing, playing a movie on loop at 120cd/m brightness (60 percent here), the Asus TUF Gaming FX505DY lasts five hours 20 minutes. It’s not long enough for a full day’s work, and it is no surprise in a laptop from this category.

Stamina is also fairly similar too Asus’s own claim of six hours.

The Asus TUF Gaming FX505’s connections are unusual in two respects. They all sit along the left hand-side, leaving the right blank. And there’s no USB-C shaped connector at all. In 2019, this seems very odd.

In its place you get three full-size USB ports. Two are specced to USB 3.1 Gen1, and one is a slow old USB 2.0. This will be the mouse port, then. The Asus TUF Gaming FX505DY also has a full-size HDMI, 3.5mm headphone/mic socket and a full-size RJ45 Ethernet port.

There’s no memory card slot, which again seems odd in a laptop this size.

This array of ports is probably better than a couple of ultra-fast USB-C Thunderbolt sockets for most of us. But the Asus TUF Gaming FX505DY is fundamentally not future-proofed thanks to the missing USB-C.

The Asus TUF Gaming FX505DY joins the Dell G5 15 and Acer Nitro 15.6 as one of the better budget gaming laptops. One of the highlights is something that doesn’t actually shine in the results: the display.

It may not have the highest saturation or brightness, but it’s bright enough for indoors and very good contrast gives it punch comparable with a more expensive model. Do shop around for a deal, though, as while the Radeon 560X graphic card used here is solid, you still get better results from Nvidia’s budget options.