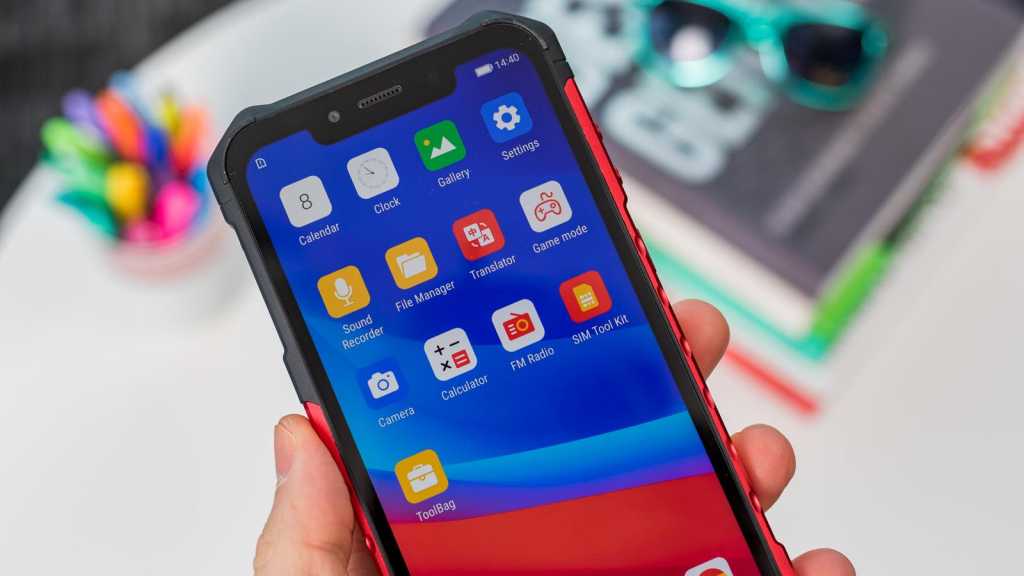 Tough on the outside but intelligent within, the Armor 6 is as much suited to hard labour and extreme pursuits as it is gentler everyday tasks. For those who require a rugged phone it is waterproof, drop-proof, shockproof and dustproof, tough enough to handle whatever is thrown at it, and whatever it is thrown at. When you’re not playing with power tools or clambering up mountains, you’ll appreciate modern luxuries that prove durable phones no longer demand compromise.

The Armor 6 is a durable phone from Ulefone, mixing decent mid-range specs and long battery life with a tough outer shell, and is just the job for those who are known to break their phone as often as they break into a sweat.

For extreme sports fans, labourers and the downright clumsy, this tough phone has their backs with IP68 waterproofing, Gorilla Glass 5, and a metal- and plastic outer shell that is strangely alluring with its rugged looks.

Adopting the same full-display design as today’s flagships this trendy 19:9 smartphone, with its hulking 6.2 screen and modern comforts including wireless charging and a dual-lens camera, bridges the gap between a life on the edge and a life on the couch.

Where to buy Ulefone Armor 6

If you decide to buy from China instead you could make some savings, and GearBest currently stocks the Armor 6 at a saving of £110, down to just £319.20 ($399.99 for US customers). But remember that import duty is payable at 20% of the value on the shipping paperwork if requested by customs, and this could dissolve much of the original saving.

You can also find the Armor 6 at AliExpress and Banggood – use code 1BGA6 for a $15 discount at Banggood, valid until February 15.

Available in black or black and red, we tested the latter version of Ulefone’s tough phone. Flashes of metallic red pick out the primary camera and fingerprint sensor, plus a Ulefone logo on the rear. A stripe running down left and right edges of the smartphone also help break up the mass of black.

This is no dainty design, yet the Armor 6 is strangely appealing with its rough and rugged good looks. Tough phones and slim bezels simply don’t mix, but Ulefone has taken steps to at least make it feel as though it’s not something you’d find in the late-20th century.

There’s a notched screen, which allows for more screen space by combining into one strip both the notification bar and the camera, speaker and sensors that you would typically find immediately above. Rather than the smaller ‘teardrop’ or ‘waterdrop’ notches we’re now seeing on new phones, though, this is a reasonably wide notch that is around half the width of the display.

Ulefone has also plumped for a tall aspect ratio of 19:9, which enables it to fit a larger panel without increasing the smartphone’s width. Given that the edges of this phone are already encased in extra padding for protection against drops, any savings that can be made here are useful.

The Armor 6 is still too wide to comfortably use in a single hand – your thumb simply won’t reach across to the top third of the display. But it’s neither as heavy (268g) nor as large as we would expect for a rugged smartphone that builds in a huge 5,000mAh battery and a 6.2in display.

The screen itself is a nice example, Full-HD+ in resolution and perfectly clear. We were impressed with its brightness, which we measured at 407 nits, and when you’re standing atop a mountain with sunshine beaming down on you this will make all the difference in terms of visibility.

The glass is protected with Gorilla Glass 5, which is very good but not infallible, and if you drop the phone face down on a sharp stone the screen could still break. You’ll find the outer casing is slightly raised at the edges to help keep that screen safe.

Unlike many tough phones we’ve tried, the Ulefone’s internals are not accessible from the rear. The hybrid SIM tray (two SIMs or one plus microSD) and USB-C port are instead found hidden behind rubber flaps that keep out water and dust. They are fiddly and annoying, but serve a purpose. Many flagship phones now protect the port itself in order to do without these flaps.

Ulefone claims the Armor 6 meets IP68 and IP69K/MIL-STD-810G standards, which is as good as it gets on this front. Breaking down those ingress protection ratings, the Armor 6 is protected against both submersion and close-range high-pressure, high-temperature sprays of water. And it’s completely sealed from dust.

In case you weren’t already aware of its rugged prowess, you’ll find the terms ‘SHOCKPROOF’ and ‘WATERPROOF’ emblazoned on either edge. There are also legends for ‘Type-C’ and ‘TF/SIM CARD’ (TF is also known as microSD) on the rubber flaps, and ‘IP68’ on the top edge. We don’t love this: we already know these things and feel they detract from the overall design.

One you won’t find is ‘HEADPHONE JACK’ – because there isn’t one. The Armor 6’s USB-C port is used for audio as well as charging, and you’ll find a headphone adaptor in the box. Though this approach saves space inside the phone and, in theory, can provide better audio, some people are irritated at the inability to charge their phone while listening to music without purchasing a split cable.

Wireless earphones are increasingly popular these days, but with this Ulefone you can also take advantage of wireless charging. It’s not going to be as fast as using the USB-C port, which can accept up to 18W, but it’s convenient (no flaps to prise out) and, at 10W, the Qi support is considered ‘fast’. (In 2019 we’ll see new phones that can wirelessly charge much faster.)

While we’re on the subject of charging the Armor 6’s standby time is incredible. If you’re not using it then it just keeps going and going. We had to throw intensive apps at it just to get it to drain down enough to complete our testing.

The battery is rated at 5,000mAh, which is more than double what you get with some phones, though most Android phones are around 3,000mAh. It entirely depends on your usage, but we could easily envision two days of life from this smartphone.

The Armor 6 does also have a speaker for playing audio without the headphones, but sadly it’s a rear-facing mono speaker which can mean sound is fired into your palm or on to a desk. So it’s functional rather than brilliant, but useful to have all the same.

Also found at the back is a dual-lens camera (21Mp + 13Mp) and a fingerprint sensor. The Armor 6 also supports Face Unlock, but it’s less secure than using the fingerprint sensor, which worked well in our tests.

An unusual sensor is found to the left of the rear camera assembly, and this is a UV Detector that can help avoid sunburn. Our initial impression was that this is a bit gimmicky, but it does have uses and ties in with the preinstalled ToolBag app, which provides extras including a compass, sound meter, protractor, plumb bob, barometer and other handy tools for labourers.

Aside from this Toolbag app the Armor 6 is running more or less standard Android 8 Oreo, with full Google apps plus a Translator and Game mode, and some smart gesture options. There’s no app tray, but the UI otherwise feels and looks very familiar.

In the Settings menu you will find an option to configure SOS Calls, which can be quickly activated with a long-press of the volume-down button.

Powering the Armor 6 is an octa-core MediaTek chip, the Helio P60. It’s clocked at 2GHz, integrated with Mali G72 MP3 graphics and paired with 6GB of RAM. There’s also 128GB of internal storage, which is generous as it stands, but can be expanded by up to 256GB through microSD if you don’t wish to take advantage of the dual-SIM dual-standby functionality.

In our experience the Armor 6 is very smooth in operation, and capable of any task most people might want to throw at it. We ran our usual benchmarks – with the exception of Geekbench 4, which failed to run – and found middling performance that should not disappoint most users.

In T-Rex, a component of the GFXBench graphics benchmark, our onscreen test turned in a playable framerate of 34fps. In the slightly more intensive Manhattan it scored a still usable 19fps, but the results fell further as we turned up the intensity. It managed 12fps in Manhattan 3.1, and 7fps in Car Chase. And in the normal tiers for Aztec Ruins and Vulcan it turned in 7fps for both.

In the JetStream browser benchmark we recorded 45.5.

The type of scenarios that might see you needing to use a rugged phone could also be the same scenarios in which you have the best photographic opportunities, so you need to have a good camera to hand.

The Armor 6 is fitted with a basic 8Mp selfie camera at the front, but a dual-lens assembly at the rear that combines 21Mp and 13Mp Sony lenses.

By default the camera app shoots with an 18:9 aspect ratio, but this crops the top and bottom portions off the sensor and artificially enlarges the picture back up to 21Mp, leaving you with a narrow view. We recommend you choose 4:3 in the settings to get the largest field of view.

The photos themselves are acceptable, but colours are very warm. When you zoom in grain is noticeable, and the image is not as sharp at the extreme edges.

With HDR mode switched on those warm colours become more neutral, but at the risk of appearing washed out. This effect is again more visible at the outer edges of the image.

In low light the Ulefone performed admirably, effectively lighting the scene and doing a good job of differentiating shades of black and defining text. The same grainy effect is noticeable at full-size, however.

The camera app itself is reasonably basic. It supports some preset scene modes, but there’s no AI to intelligently select these for you. There are also some real-time filters and support for basic manual settings and a beauty slider.

You can also refocus images shot in Aperture mode to create the bokeh effect, but it’s not brilliant and in our tests was more noticeable toward the top of the image.

Ulefone’s latest rugged phone is super-tough and oddly attractive. Combining a durable build with long battery life, modern comforts and mid-range performance it has a lot to offer. In a future version we’d like to see the port cover and legends removed, the speaker re-positioned and improvements to the camera, but it’s hard to find fault at this price.