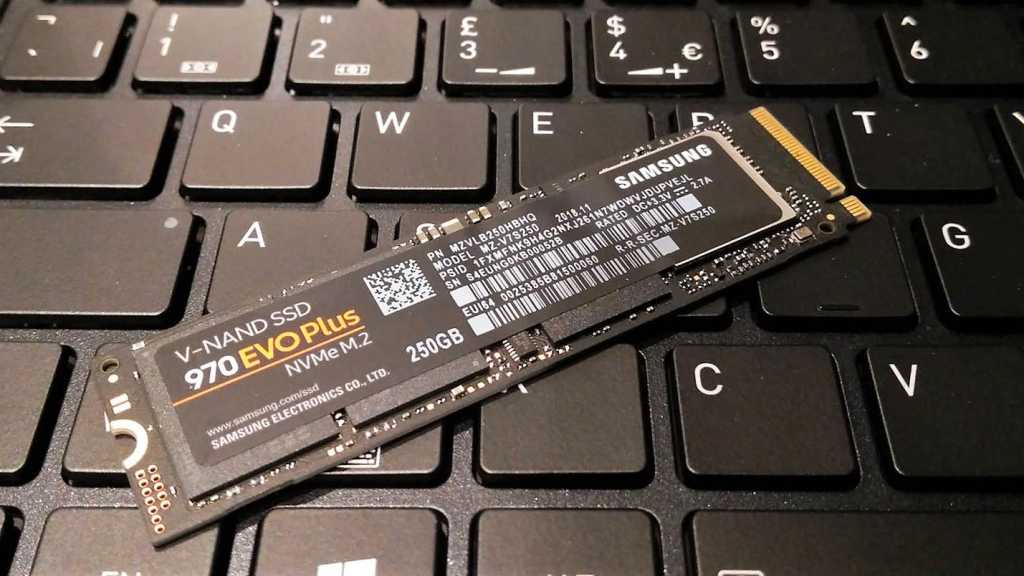 We weren’t expecting the 970 EVO Plus but we’re certainly not complaining about this addition to Samsung’s SSD range. This drive is one to go for if you want the best performance from an NVMe slot. There’s little to dislike apart from the fact it has a rival offering better value.

The appearance of the Samsung 970 Evo Plus is unexpected, as historically Samsung don’t have ‘Plus’ releases that follow new product generations just six months later. Nevertheless, here’s our full review.

The obvious conclusion is that something went wrong, either in the original 970 Evo or in how that product compared with competitor devices released since. Only Samsung knows the truth of this development, but on paper, the new Plus generation seems a significant upgrade over the prior model, especially if reading and writing speed are your primary objectives.

Check out our chart of all the best SSDs you can get.

As the new 970 Evo Plus is an NVMe connected drive, it uses a standard M.2 2280 form factor that has become a standard for these devices.

If you don’t have an M.2 PCIe slot on your desktop PC, you can install this on a PCIe card, if you have the four PCIe lanes free that are required to pipeline the data in and out.

In many aspects, not much has changed from the original 970 Evo. It uses the same form factor, along with the same Samsung Phoenix Controller, Samsung V-NAND 3bit MLC NAND modules and the use of LPDDR4 cache memory.

So where is the ‘plus’ located in this design, would be the obvious question? 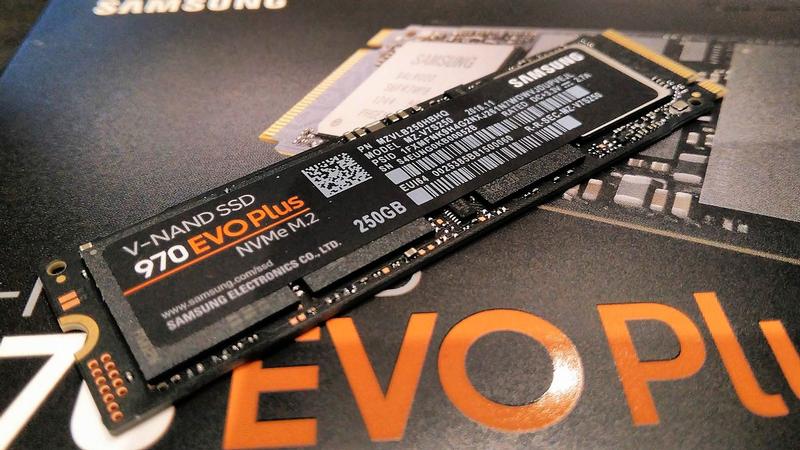 Looking into the data that Samsung provided, it appears to be in the way that the NAND V5 memory modules are organised, how TurboWrite uses the SLC buffer and the controller is tuned to deliver significant efficiencies.

These translate into more than performance enhancement of more than 50 percent in some processes over the 970 Evo, along with better power management and reduced heat generation.

Applying the motto of the tech industry, ‘there is no free lunch’, we looked for the downside to these improvements, but found no obvious drawbacks. The 970 Evo Plus even uses the same or less power on some models than the drive that proceeded it.

When you factor that this model is coming in at almost identical MSRP as the 970 Evo, the Plus looks like a complete no-brainer.

For our testing, Samsung curiously sent us the 250GB version of this drive, i.e. the one with the worst write performance of the series. That said, it’s almost as quick as all the models in the previous 970 Evo design, and for most users being 900MB/s slower than the 1TB model at this one aspect won’t be a major issue.

But, if you want all the advantages of the new Plus design, we’d recommend that you get the 500GB or bigger drives, as they all have better write performances.

As usual, we used mostly synthetic bench testing using CrystalDiskMark 6.0.2, AS SSD and even ATTO to better understand the strengths and weaknesses of this design.

We have two important takeaways from the testing; this drive is as fast as Samsung claims or faster, and it can sustain decent write speeds even when the cache is well-saturated. 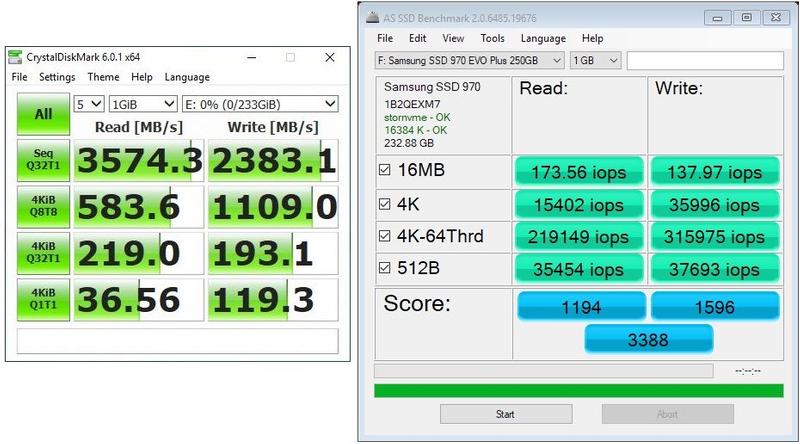 Under CrystalDiskMark it achieved an impressive 3,574.3MB/s reading and 2,383.1MB/s writing, exceeding the officially quoted performance

In specific reference to the review hardware; this is probably the quickest 250GB NVMe drive, although going to the next capacity size does give you a decent speed boost at writing.

The scores also reveal that this drive is not only substantially better than the base 970 Evo, but it also eclipses the Samsung 970 PRO in write performance and IOPS.

We’re not sure where that leaves the PRO, because it is no longer the fastest option in the 970 NVMe series.

The arrival in the market of the Corsair MP510 might well have been the catalyst for the relaunch of the Samsung 970 Evo in its Plus incarnation. Or, it was the knowledge that they could do better if they tried, maybe.

Whatever the motivation, the new Samsung SSD 970 Evo Plus is certainly the NVMe to have if you want to squeeze the very best performance out of an NVMe slot.

The only catch here is that the pricing is the same as the 970 Evo, which in retrospect was overpriced at launch. That makes it at least 20 percent more than the Corsair MP510, although the extra write speed and 16GB more capacity in the 256GB 970 Evo Plus might make that version worth it.

The larger Plus drives probably don’t justify the difference, as they offer a very similar performance profile to the Corsair product, even if they’re slightly bigger.

It will be interesting to see if some great deals on the original 970 Evo appear, as resellers attempt to flush them out of the channel for replacement with the superior 970 Evo Plus.