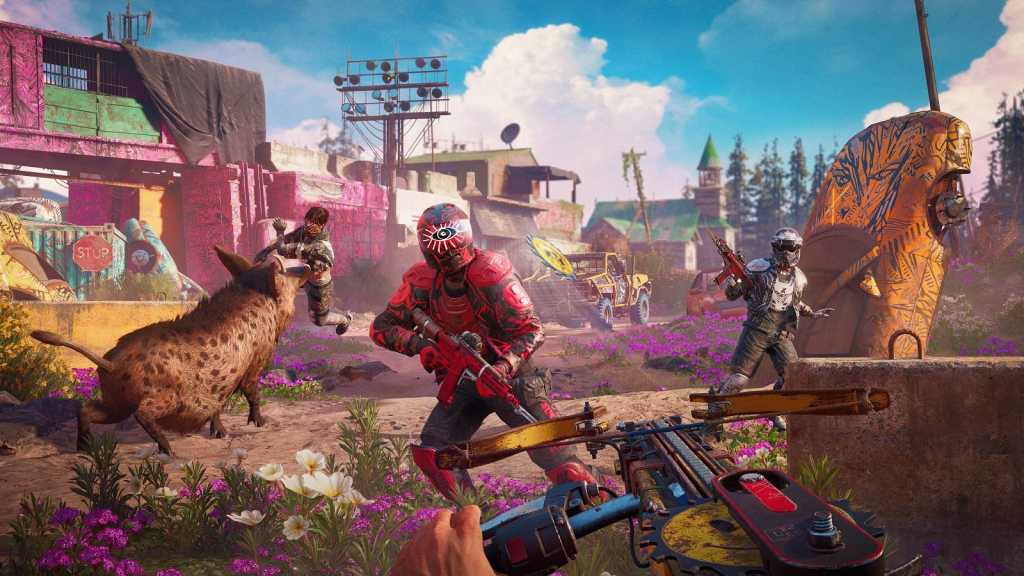 Far Cry New Dawn is certainly more than a simple reskin; there are new mechanics, activities and places to explore despite being built on the same map as Far Cry 5, and the campaign puts burning questions that we had after playing FC5 to rest. For under £40/$40, it’s well worth a buy.

Far Cry New Dawn is set 17 years after the explosive events of  Far Cry 5, and it’s safe to say that the fictional Hope County is unrecognisable. Nukes decimated the modern world and forced humanity underground, but in the absence of man, nature flourished; weird and wonderful flora blankets rotting cars, destroyed buildings and other remnants of the ‘old world’ while mutated animals roam the wilderness.

But is this a simple reskin of Far Cry 5, or something more? We’ve fought our way through the campaign and here’s our full Far Cry New Dawn review.

Far Cry New Dawn is available on PS4, Xbox One and PC right now, following a 15 February 2019 release. You can buy the game right now from the likes of  Amazon and  Ubisoft itself, as well as  Steam for those on PC.

The standard game costs a decently-priced £39.99/$39.99, while those that want additional weapons and skins can fork out £47.99/$49.99 for the digital-only Deluxe Edition on the  PlayStation Store.

Though it’s set in the same world as Far Cry 5, the open world of Far Cry New Dawn doesn’t feel like a simple reskin. The world looks completely different, and the way you interact with it is different too. In fact, we’d argue that most of the map is unrecognisable with the exception of prominent landmarks, which too have been completely transformed.

Vivid flora, mutated animals and new enemies provide a more challenging experience than previous Far Cry games, and despite the post-apocalyptic setting, the world still manages to feel alive and interesting. As well as stumbling across people trying to survive in the wilderness, you’ll come across references to old companions, gangs and even the Cult throughout the open world, helping fuel the urge to explore the lush wilderness. 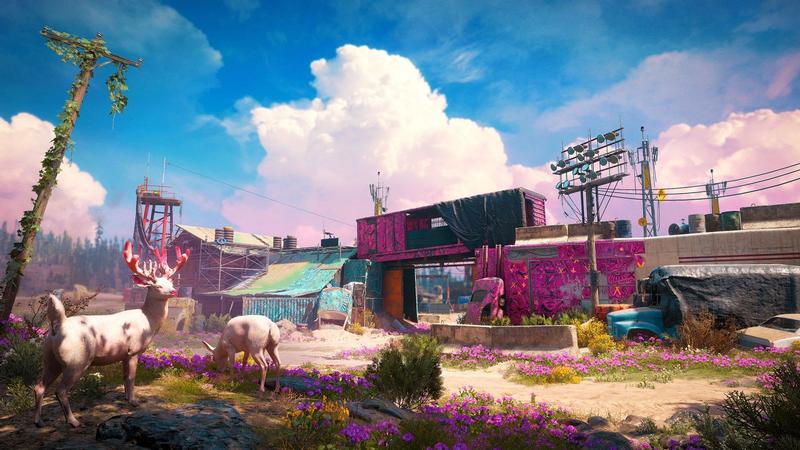 You explore this new world as a new protagonist – sorry Rook – with the grand aim of securing and holding settlements across America. You are once again a silent protagonist, nicknamed Cap, and can not only choose whether you’re a male or female, but you can customise your character’s look and clothing too.

Of course, not everything goes to plan during your grand quest and you find yourself stuck at Prosperity, the home base of surviving Hope County residents. The aim is to build up Prosperity, both in terms of facilities and residents, whilst also protecting it from New Dawn’s antagonists – the Highwaymen.

The Highwaymen roam the post-apocalyptic US in search of resources whilst generally causing chaos and destruction wherever they go. The gang is led by twins – Mickey and Lou – who seem to be more dangerous and deadly than the Cult in Far Cry 5. As you take the fight to the Highwaymen and clash with the twins, you’ll meet new and familiar companions – both man and beast – to back you up, although Boomer and Cheeseburger are long gone. How sad.

Crucially, it provides answers to the many questions that gamers had after completing Far Cry 5, specifically about Rook and Joseph Seed, and rounds off the story of Hope County in a satisfying way. The events at the end of Far Cry 5 are addressed both in the campaign of New Dawn and in the form of notes scattered throughout the open world, encouraging fans of the series to really explore the sprawling landscape and read scribbled notes. If you head back to where it all began, you might even find an interesting note from the Rookie himself…

New light RPG elements make combat a little more dangerous and challenging, as you’ll now have ranked enemies, weapons and armour to deal with. But on the flip side, you’ll also have weapons and armour that you can upgrade in weird and wonderful ways to bring the pain to the Highwaymen and anybody else that stands in your way.

And believe us when we say that the range of new post-apocalyptic guns keeps gunplay fun and interesting; after all, firing a buzzsaw launcher into a room to see it ricochet off the walls and take down every enemy in its path doesn’t get old. 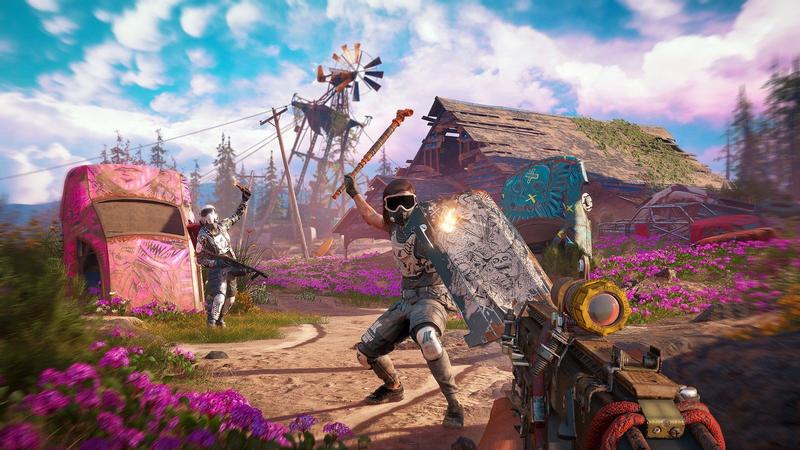 One of the main reasons to explore post-apocalyptic Hope County is to obtain resources. With traditional cash going the way of the Dodo, resources are valuable and a required component for just about everything in New Dawn, from upgrading the facilities at Prosperity to crafting new weapons and vehicles.

The most valuable resource is Ethanol, which is required to unlock and upgrade various facilities at Prosperity. While it is possible to come across Ethanol on your travels, the main way to get your hands on some is to take over Highwaymen outposts. In a similar vein to previous games in the series, you take on Outposts with the aim of clearing out every bandit in the area. Once you’ve cleared the area, the outpost is yours and you’ll unlock a fast travel point, resources, etc.

But for the first time, you’re also able to give up the outpost and let bandits retake it. It’s called Outpost Escalation, and the idea is that the returning bandits are better equipped with more reinforcements, making it more difficult to take over. But with increased risk comes increased reward, and if you do re-take the outpost, you’ll be given more valuable resources in return. It’s a good idea that should provide additional enjoyment when taking over outposts while keeping in-line with the story. 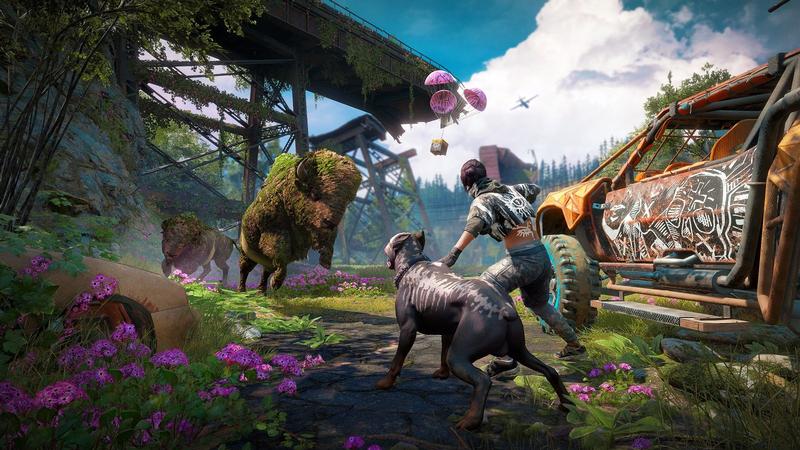 Taking outposts aside, there’s a lot to do in Far Cry New Dawn apart from the main campaign. There are new events that fit the post-apocalyptic theme, including supply drops, looting enemy cargo, treasure hunts and a personal favourite of ours, photo location hunting.

The idea is simple; you find a photo of a landmark or location in Hope County before the nuclear blast, and then try to locate it. You then hold the photo out in front of you for a nice then-and-now comparison, and get yourself a nice reward. It’s an interesting style of photography that works well in the world that New Dawn is set, and encourages you to explore even once you’ve found all photos scattered throughout the environment.

Expeditions are another new addition to Far Cry New Dawn, allowing you to leave the open world of Hope County and explore other regions in the US with the aim of securing valuable loot and rare resources. The content is entirely randomised according to Ubisoft, so expeditions should always provide something new for players to do, although we must admit we’ve come across the same scenario more than once during our time with the game.

In essence, you land, grab the package marked by pink smoke and get to the extraction point as fast as possible. While that may sound simple, it’s anything but as the package you pick up has a GPS tracker built in. This tracker activates a few seconds after you grab the package, alerting every single enemy in the facility to your location.

That’s when all hell breaks loose – you’ve taken a bunch of important resources in a dying world, after all. Bullets will be flying, grenades will be thrown, cars and quad bikes will chase you down and there will be times where you’ll be trapped with no-where to go. Even once you reach the extraction site, you have to wait until the timer runs out and your pilot swoops in to pick you up. It’s the most ’Far Cry’ game mode ever, with the series’ signature chaotic gameplay present and, if we’re honest, turned up to the max.

Far Cry New Dawn not only answers the burning questions gamers had after playing Far Cry 5, but it’s a fun, engaging game that stands on its own and gives a hint at the RPG-heavy direction that future games in the series may be heading – and we love it. The heavier focus on RPG elements like ranked enemies provide a new depth to the game, which should stop the game becoming same-y over time.

It’s certainly more than a simple reskin; there are new mechanics, activities and places to explore despite being built on the same map as Far Cry 5. In fact, we’d go as far as to say that the environment is almost unrecognisable, with the exception of a handful ruined landmarks of course.