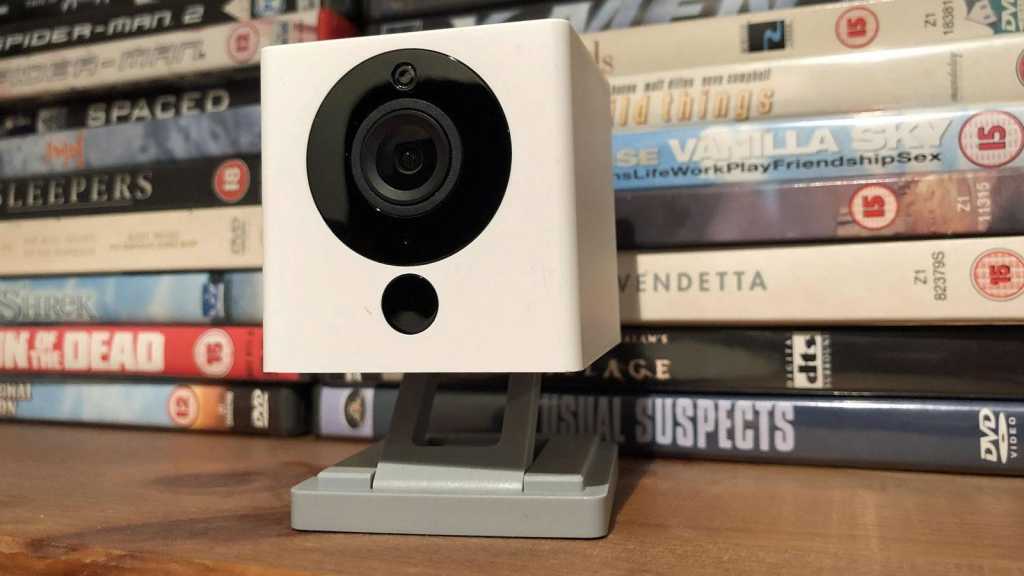 The SmartCam does almost everything you need it to and is a real bargain. It’s so cheap you could put SmartCams in seven rooms for the same price as a single Nest Cam.

If you’re looking for a Wi-Fi security camera, chances are you’ve already discovered that the big brands cost anywhere from around £100 up to £249 per camera. And then some of them have the cheek to force you to subscribe to a cloud storage service to use some of the most useful features.

Widen your search and you’ll find plenty of cheaper alternatives, most of which fall down on poorly designed apps or which don’t have the features you want.

Surely it follows, then, that a camera costing less than £20 can’t be any good. Well, surprisingly, it can.

The SmartCam costs £19.99 from Neos plus £4.99 next-day postage. Accessories include a 32GB microSD card for £10.99 and a £4.99 mounting kit which comprises a 1.5m USB cable extension and a metal ring and adhesive pad that lets you magnetically attach the camera to a wall or other vertical surface.

Currently it’s only sold in the UK.

In September 2019, Neos added a subscription option called Boost which costs £3.49 per month (£41.88 per year). It means recorded video clips last 60 seconds instead of 12 seconds and you can have up to 12 hours of recorded footage per day. Boost also gives you the ability to set ‘Activity zones’ which means you can monitor specific areas for motion, something you can’t do if you don’t subscribe.

The final feature is the ability to schedule when the camera records, plus turn recording on or off from the app.

If the price was per camera, Boost wouldn’t be a very good deal, but a subscription supports up to three cameras, making it much better value if you have two or three.

For alternatives, see our roundup of the best home security cameras.

For the tiny price, this tiny camera packs in more features than you might expect, including:

Of course, the camera itself is built to a budget and while the matt plastic finish is fine, the stand feels a bit flimsy. The design is solid, though, and the two hinges allow it to tilt up or down and it also rotates so you can get the angle you need.

The magnet in the base isn’t amazingly strong, but it proved enough to hold the SmartCam in place on the side of a fridge. It wouldn’t, however, stick to a curved radiator that other cameras have had no problems with.

On the rear is a recessed microUSB port that we found would only accept the cable supplied in the box and none of the others we had lying around. There’s a mains adapter in the box as well, but you can use any standard USB extension cable if 1.8m isn’t enough (or buy the mounting kit from Neos).

The manual doesn’t explain why there’s a full-size USB port as well, but we’re told this is for daisy-chaining another SmartCam so you can have a different angle in the same room. The only benefit of this as opposed to running two SmartCams separately is that they use only one mains socket.

Underneath the main body is a speaker grill, a setup button and the microSD slot.

Setup is remarkably simple. You power on the camera, wait for the light to flash, then press the button for three seconds. A voice will announce that the camera is ready to set up. You then install the Neos app, create an account, tap the + button, choose your Wi-Fi network and hold the displayed QR code in front of the lens.

The code tells the camera the Wi-Fi network name and password, which means there’s no need to first connect to the camera’s Wi-Fi as you do on some competitors.

If the code is read correctly, you’ll see the camera’s feed in the app.

We found the interface intuitive and simple to use. It’s much like the Nest app, so you can see a list of recent clips and whether they were triggered by motion or noise.

In the settings you can adjust sensitivity sliders for both. There are limitations: you can’t choose an area to monitor for motion and exclude other areas unless you subscribe to Neos Boost as detailed above.

Whether you subscribe or not, there’s nothing intelligent about the detection: any motion will trigger an alert, be it a person, pet or a tree swaying in the wind.

The most impressive feature is that Neos offers unlimited 14-day cloud storage for free. Do not buy a SmartCam solely because of this, though. We’ve seen several security cameras change their cloud storage policies in recent years, ceasing any free storage offering and replacing it with paid subscriptions.

Though it is unlimited, there are catches: each clip is restricted to 12 seconds and there’s a five minute cool-down period before anything can trigger a recording again. (This cooldown is reduced if you subscribe to Neos Boost.)

If that sounds like too much of a compromise, then you can record the live feed for as long as you like via the app, but this means you have to be watching the feed. A better solution is to insert a microSD card.

When we put a card in our sample camera it beeped twice. Later, we found it had successfully recorded clips, and that it hadn’t formatted the card. It simply left all the existing files and used the remaining free space to store new clips. These are stored a little like a dash cam’s footage, with each file being one minute long.

Although it can record continuously, it only keeps recording when motion is detected. If none is, it will stop recording to save space.

The app displays clips stored in the cloud and these can be downloaded to keep and / or share.

You can choose whether or not to embed the time and date into recorded videos, whether the status light on the camera is on or not, whether to include the motion detection box in the recorded video, and you can rotate the video 180°.

There are also toggles for turning motion detection and noise detection on and off, but no way to schedule when the app sends you alerts.

Another feature is auto-arming. This uses the location of one or more phones to determine if anyone is home or not (you enter your home address when you first set up the app). You don’t have to use this feature, but the idea is that the camera only records when everyone is out.

Finally, there’s a built-in chat function in the app which offers tech support, but the typical response time is 24 hours – not too useful if you were hoping for live chat.

Don’t get too excited about the full HD resolution. Video quality is best described as adequate. There’s enough detail to be able to identify people during the day and if they look at the camera fairly close by at night.

The low bitrate and the fact it records only 15 frames per second means it’s not quite on a par with the best cameras. But if you simply need to know if your pets are ok (see below!) and to watch out for intruders, it’s perfectly good.

Pressing the mic button enables two-way talk and this works pretty well as long as you refrain from speaking too loudly into your phone, at which point your words become too distorted for the other person to understand.

The camera’s mic isn’t wonderful, and it can be hard to make out what people are saying on occasion. Also, we found that Windows’ default video player wouldn’t play any audio from downloaded or shared clips, so we had to resort to VLC to hear it. Sound works fine if you watch clips in the app, though.

If it were £100, we’d criticise the SmartCam for lacking finer control over motion detection and average video and audio quality, but the fact that you can buy five of them for that price means it’s a really good option if you want to try out an indoor Wi-Fi security camera without spending too much.