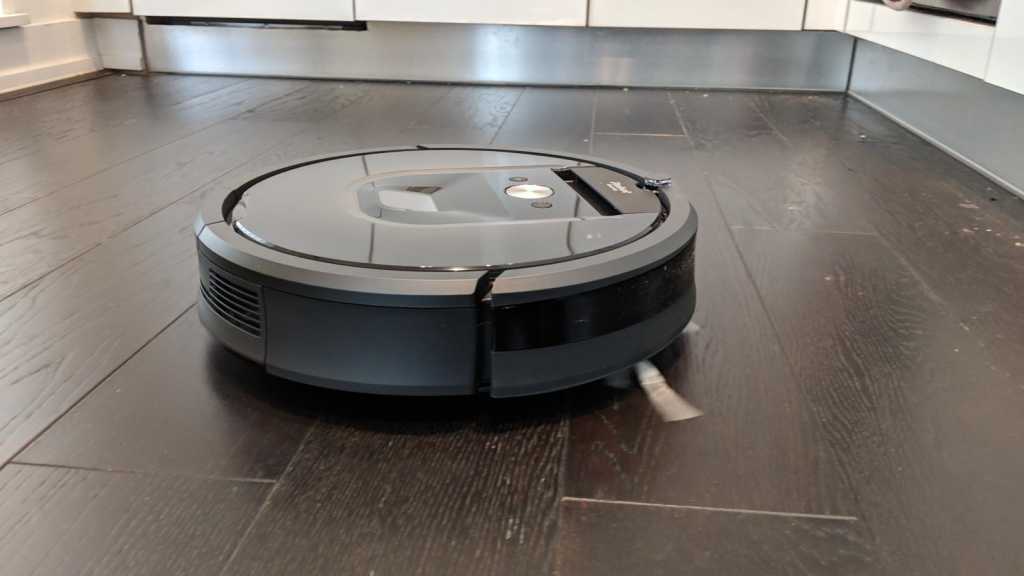 Between seriously powerful suction, a HEPA filter, and the two-hour battery this is one of the best robot vacuums around for sheer cleaning – except in the corners where the round design won’t reach. The problem is simply that it’s lagging behind slightly in smart features, while simultaneously omitting many of the manual controls that other brands continue to offer. Oh, that and the fact that it sounds a bit like a jet engine taking off.

Just as Hoover’s brand name became synonymous with the vacuum cleaner, Roomba pretty much just means ‘robot vacuum’ for a lot of people – even as plenty of rival manufacturers have come to challenge it in the market.

The iRobot Roomba 980 is one of the company’s flagship devices, promising high-power cleaning, long battery life, and connected features – including Google Assistant and Alexa support. But can it really justify its hefty price tag?

The Roomba 980 officially retails for £899/$899 – expensive for a robot vacuum – but you can usually find it for less than that.

In the UK you can buy it direct from iRobot for full price, but you’re better off going to John Lewis for £749 or Amazon for £705 at the time of writing.

You can save even more money if you’re in the US – at the time of writing it’s just $549 on Amazon US.

Check out our guide to the best robot vacuum cleaners if you want to look at alternatives around the same price – or much lower. 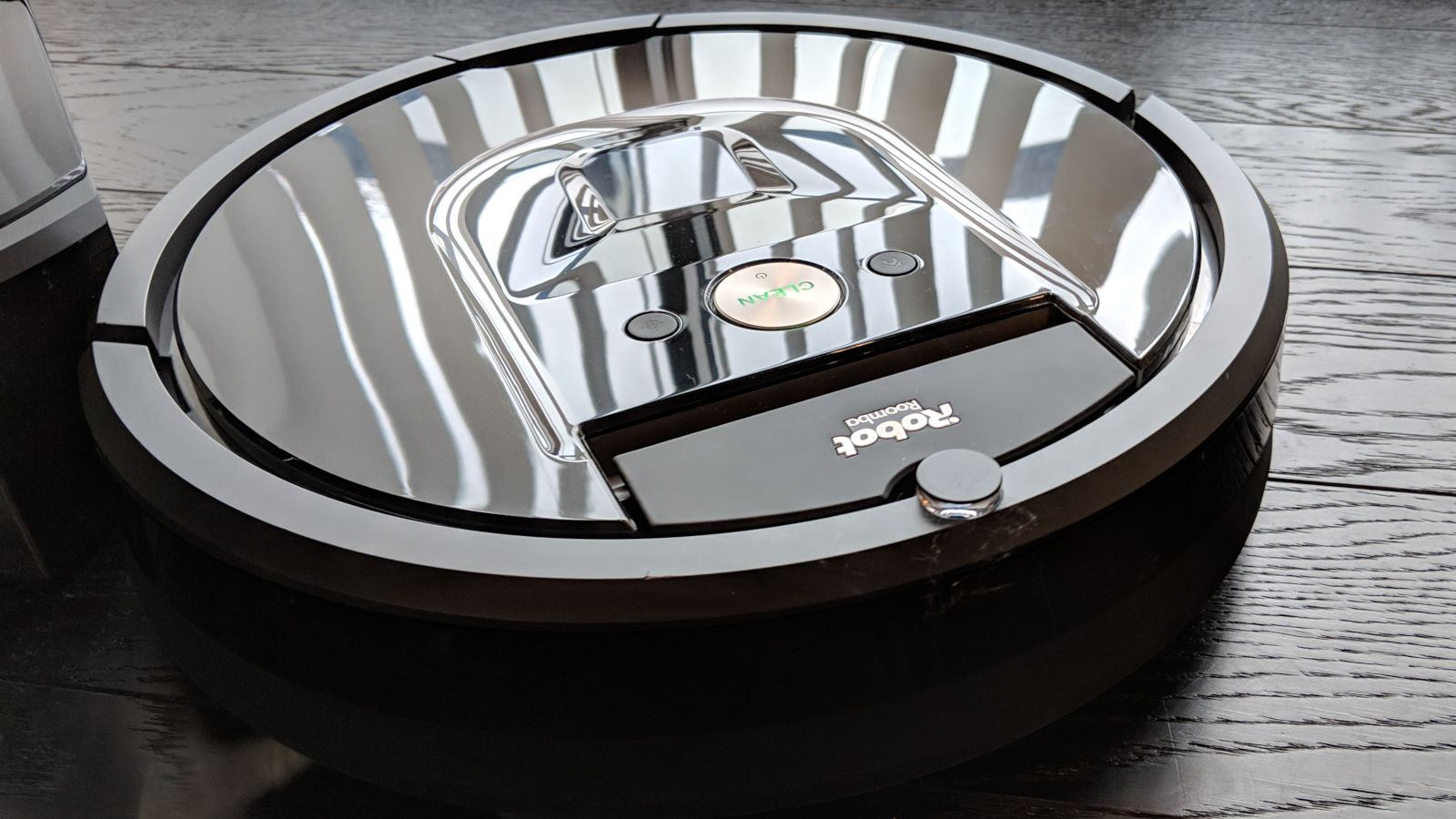 Aesthetically speaking, the Roomba 980 isn’t exactly groundbreaking – but then not many robot vacuums are.

A squat, brownish-black circle, this looks pretty similar to every other round robot vac on the market to be honest. It’s fairly short, which means it does a good job getting under sofas and other furniture (one of the key benefits of a robot vac, hitting the spots you normally can’t). The camera is also impressively compact, and doesn’t protrude from the main body as much as on plenty of other vacuums.

The top boasts a few physical buttons, but you’re unlikely to use them much – thanks to build in Wi-Fi and a connected app, you’ll mostly control the Roomba from your phone, which is where you’ll find most of the functionality.

There’s no LCD display on the vacuum itself, unlike some rivals, which is another reason you really will need to use your phone for this: you’ll quickly get frustrated if you try to do much more than start a basic cleaning cycle using the manual controls. 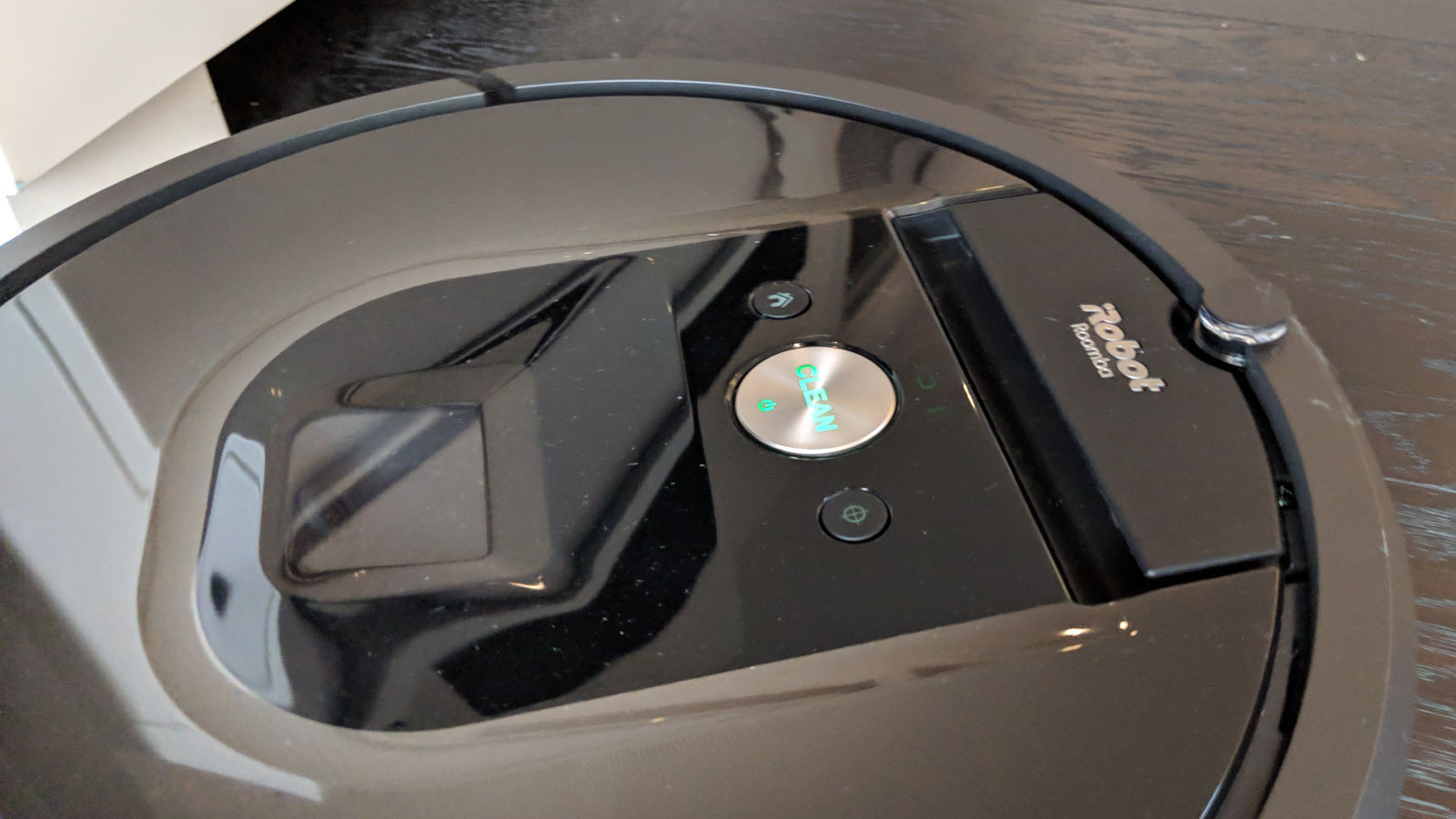 The dirt bin is easy to remove and empty – one button to take it out of the body, and then you can quickly flick open the door to empty it into the bin. At 600ml it’s also a fairly generous capacity, so you shouldn’t need to empty it too often, and you’ll see both an alert on your phone and a notification LED on the vacuum itself when it needs emptying.

The big downside here is really that fundamental circular design. We prefer the ‘D’ shape of vacuums like the Neato Botvac D7, which is better for getting right into corners, which the Roomba struggles with – not least because it only has a single brush head, rather than one on each side.

What the Roomba 980 may lack in ergonomic design and brush heads, it does at least make up for in sheer power. This is one of the most powerful robot vacuums we’ve tested so far, sucking up just about anything in one pass, whether on hard floors or carpet.

There’s an optional Power Boost mode that ups suction power when it detects that the vacuum is on a carpeted floor, and brush height is also automatically adjusted depending on the surface, which does seem to be making a difference. This is just a vacuum though – some recent models from rivals have included mopping features for hard floors, but this is strictly suction-only. 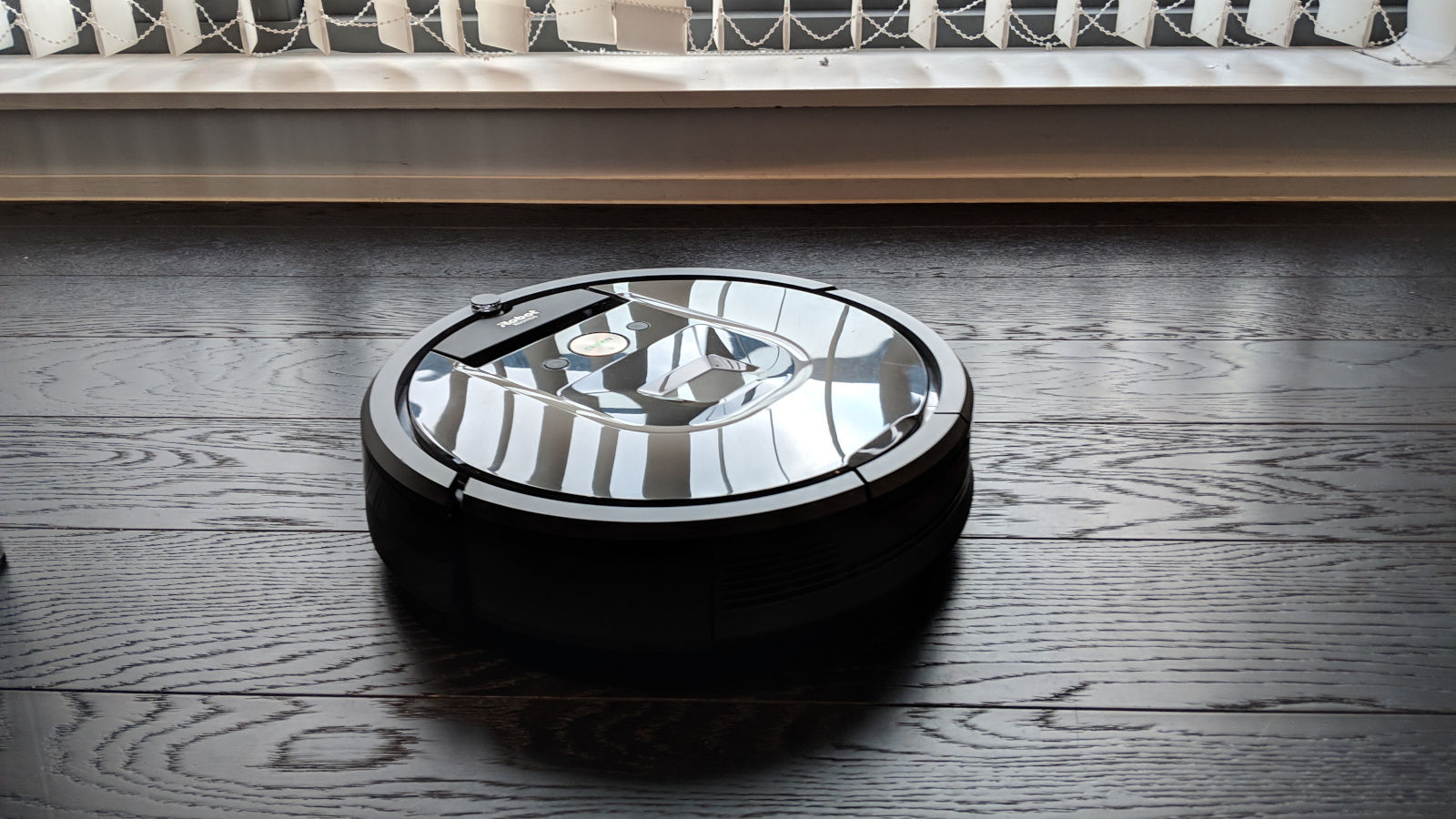 The other big perk is the inclusion of a HEPA filter, which should make the 980 appealing to anyone with allergies or concerns about air quality – this should do a good job of mopping up small particles in the air, something very few robot vacs offer.

The downside to that power is that this is also one of the loudest vacuums we’ve ever tested. Robot vacuums are often popular because you can schedule them to run while you’re out of the house, and believe us: that’s the only way you’ll ever want to use this one. It’s damn near deafening while it’s running, and with a two-hour battery life you could be stuck listening to it for a while.

As for the smart features, they’re useful but not quite best-in-class, which is a disappointment at this price point. Things start well though – the iRobot app is clean and easy to use at least, which isn’t always the case and the main screen does a good job of giving you what you need: a battery indicator and a giant ‘CLEAN’ button to get things going.

Even better, it gives you the option to name your vacuum (DJ Roomba represent) which it uses pretty consistently throughout the app, a nice touch that adds a bit of character to proceedings. 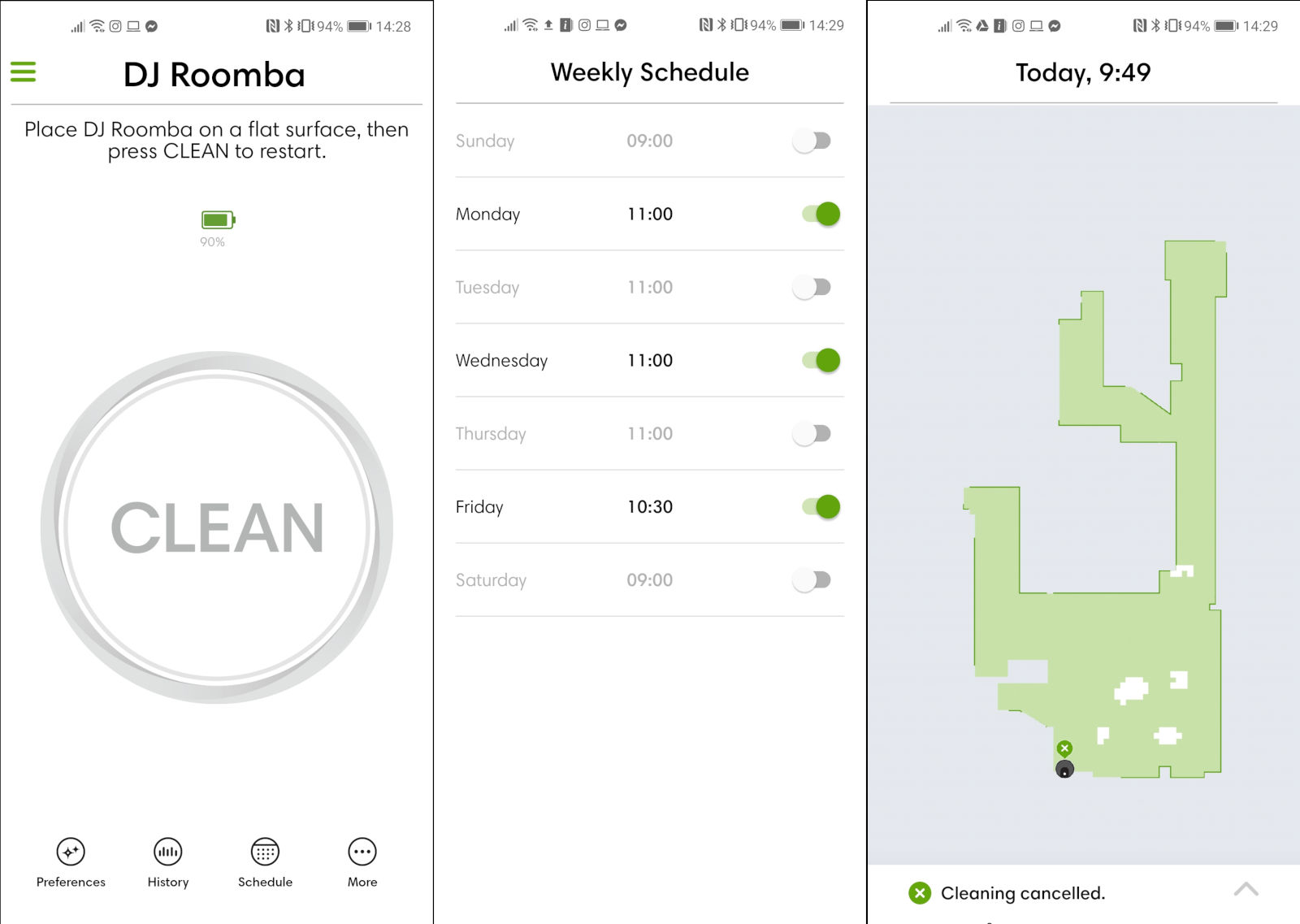 Unfortunately, beyond that options are a bit limited. You can set a simple schedule – with the option to choose which days and times it will clean, though you can only set it once per day – along with a few basic settings options like whether to do one pass or two while cleaning, or when it should use Power Boost mode.

The History tab gives you basic info on past cleaning jobs, including the option to see a map of where the robot did – and didn’t – clean. The big downside is that unlike smarter rivals you can’t use that map to draw out no-go areas for the robot or tell it to clean specific spots – if you want to block off an area you’ll have to lay out the two included physical sensors to create a virtual wall.

The app is also missing the option for manual control of the robot – not something we find ourselves using often in all honesty, but it can be useful on the occasion you want to make sure you get a specific spot. 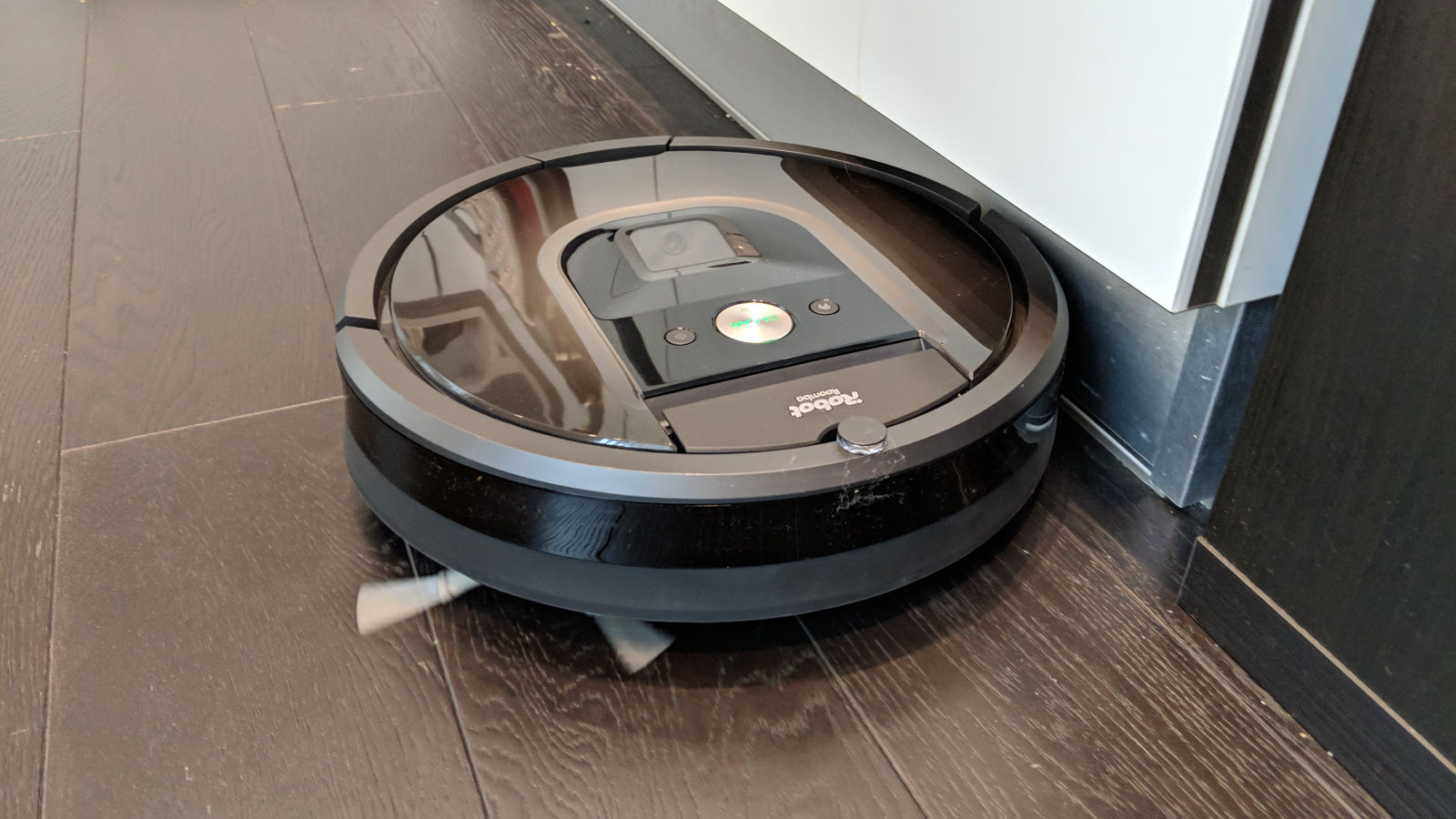 The omission of those features seems particularly egregious in a vacuum that’s so reliant on its smart controls. With no included remote and few controls on the vacuum itself, you really can’t get much use out of the Roomba 980 if your Wi-Fi goes down. That would feel like less of a compromise if the app was as good as others, or the price was lower, but as is it’s an undeniable letdown.

On the plus side, there is support for both Google Assistant and Amazon Alexa – increasingly becoming an industry standard – so if you’re not a fan of the official app you can manage a few basic controls using voice commands instead.

It’d be unfair to write off the Roomba 980 entirely. Between the seriously powerful suction, the HEPA filter, and the strong two-hour battery this is one of the best robot vacuums around for sheer cleaning – except in the corners where the round design won’t reach.

The problem is simply that it’s lagging behind slightly in smart features, while simultaneously omitting many of the manual controls that other brands continue to offer. Oh, that and the fact that it sounds a bit like a jet engine taking off.