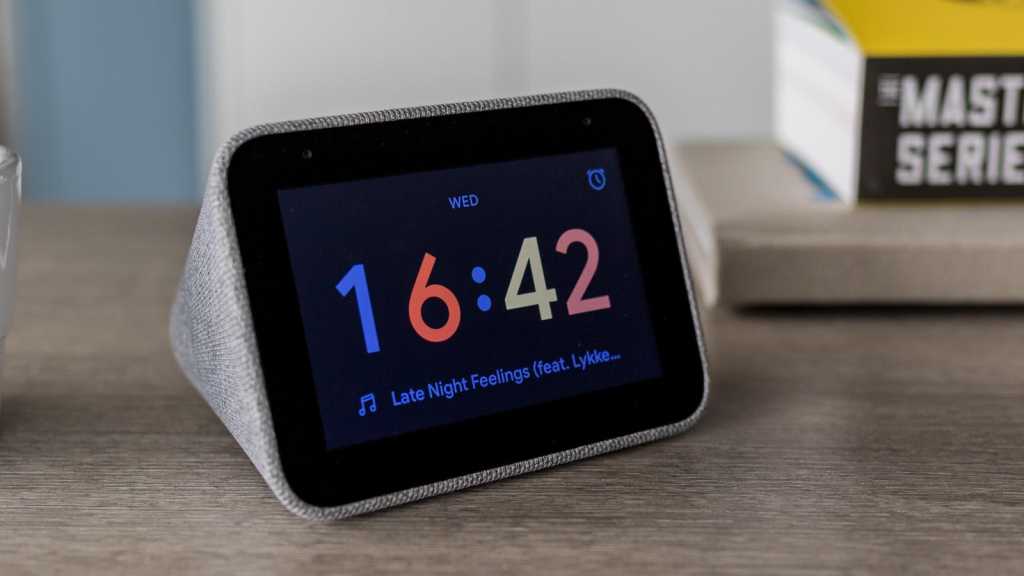 The Lenovo Smart Clock is a fairly simple concept – a Home Mini with a screen – but slick design, a simple interface, and smart features around screen brightness make it a surprisingly compelling offering. The only real downside is the lack of Bluetooth support – the main Home Mini feature missing here – but everything else about this does exactly what you want it to.

Here’s an odd one: one of the best bits of new tech to come out of CES 2019 was a clock. A smart clock, admittedly, but still, let’s make no mistake: this is a clock.

The Smart Clock costs £79.99/$79.99 at full price, and right now you can buy it from Lenovo itself, or from AO or Currys in the UK, and from Walmart and Best Buy in the States.

The closest equivalent Amazon Alexa device is the Echo Show 5 for £79.99/$89.99, which is a very similar looking piece of kit though does include video calling, which the Smart Clock does not, and obviously it’s part of the Alexa ecosystem, rather than Google Assistant. Meanwhile the larger  Echo Spot and  Google Nest Hub are both £120/$130 – a pretty steep jump up. 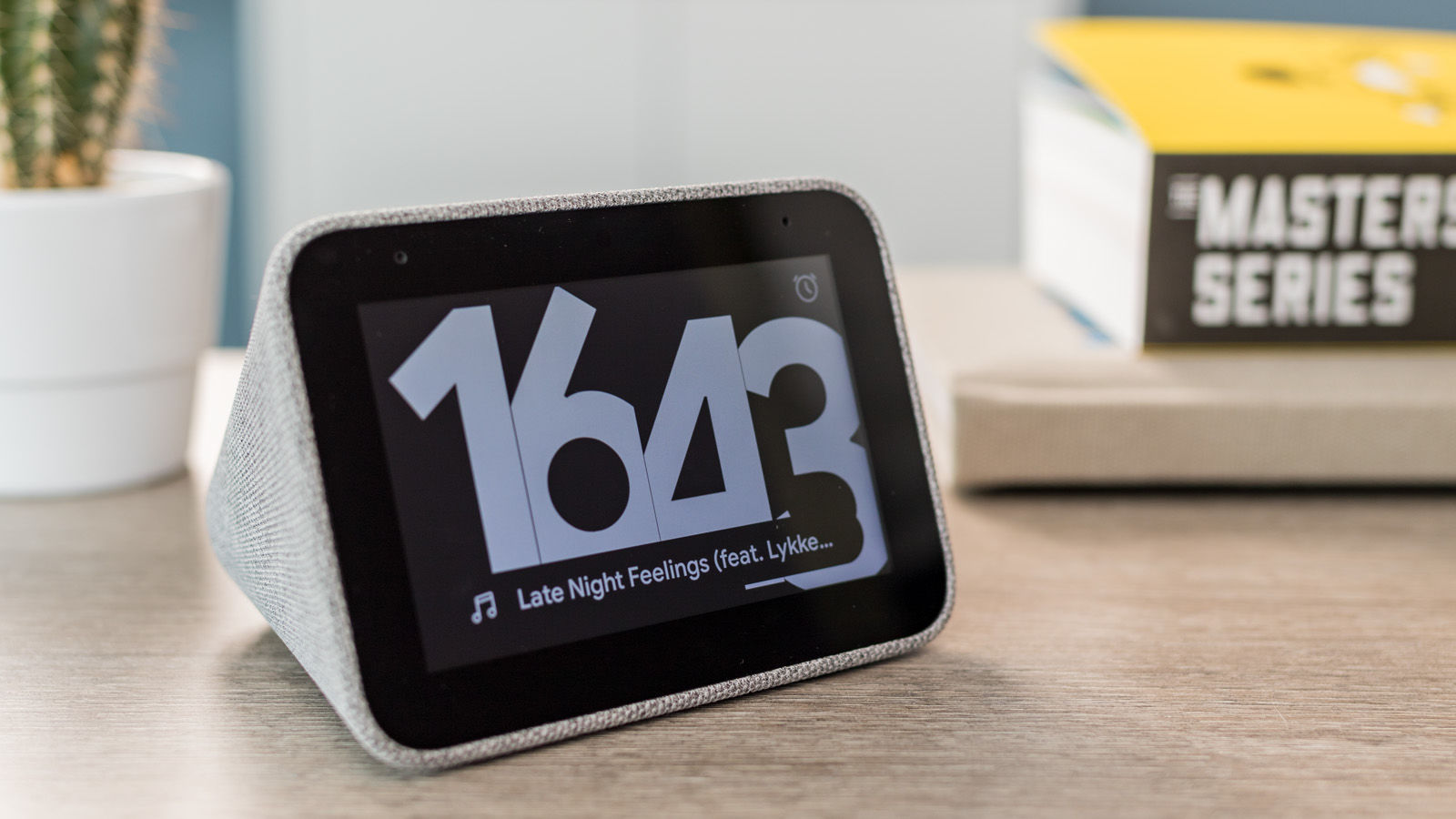 Not your father’s clock

At first glance, the Smart Clock doesn’t look much like, well, a clock. A small angular block with a rectangular 4in display at the front and a grey fabric finish that’s immediately reminiscent of Google’s own Home devices, this is certainly different to the rounded clock-face design that Amazon opted for with the Echo Spot.

Still, simple works, and the heavy tapering on the main body keeps it compact and attractive, while the decision to use a rectangular display no doubt keeps things simpler on the software side, with consistency across the other Google smart displays.

It’s all finished in the same sort of soft grey mesh that Google has used on its core Nest/Home range, so this will fit right in with any Google products you already own, and is neutral enough to blend in just about anywhere in your home. 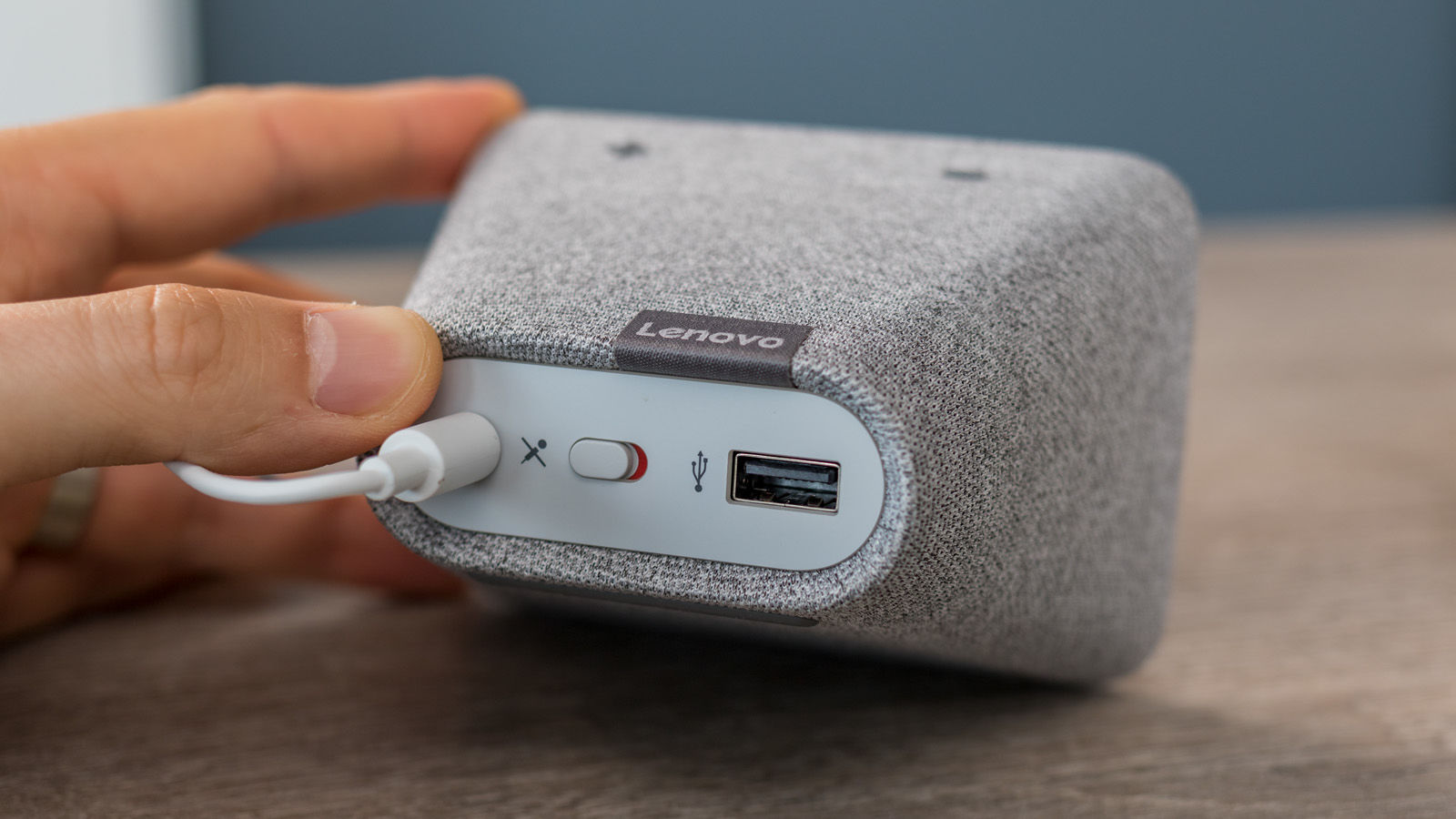 Controls are simple – volume buttons on the top and a physical microphone mute switch on the back. Then there’s just the power socket and a USB-A 2.0 port, which you can use to charge your phone – useful if this is taking up a wall socket you’d otherwise use for your phone charger, though it’s unlikely to match the charging speeds of your supplied charger, so you’ll only really want to use it overnight.

It’s also worth noting that unlike most smart displays, there’s no camera on this one. That might sound like a downside, as it locks you out of using the Smart Clock for video calls, but remember that this is really intended for your bedside table. Do you really want Google to have access to a camera in your bedroom? Thought not.

In terms of functionality, it’s probably best to think of this mostly as a Google Home Mini with a screen. 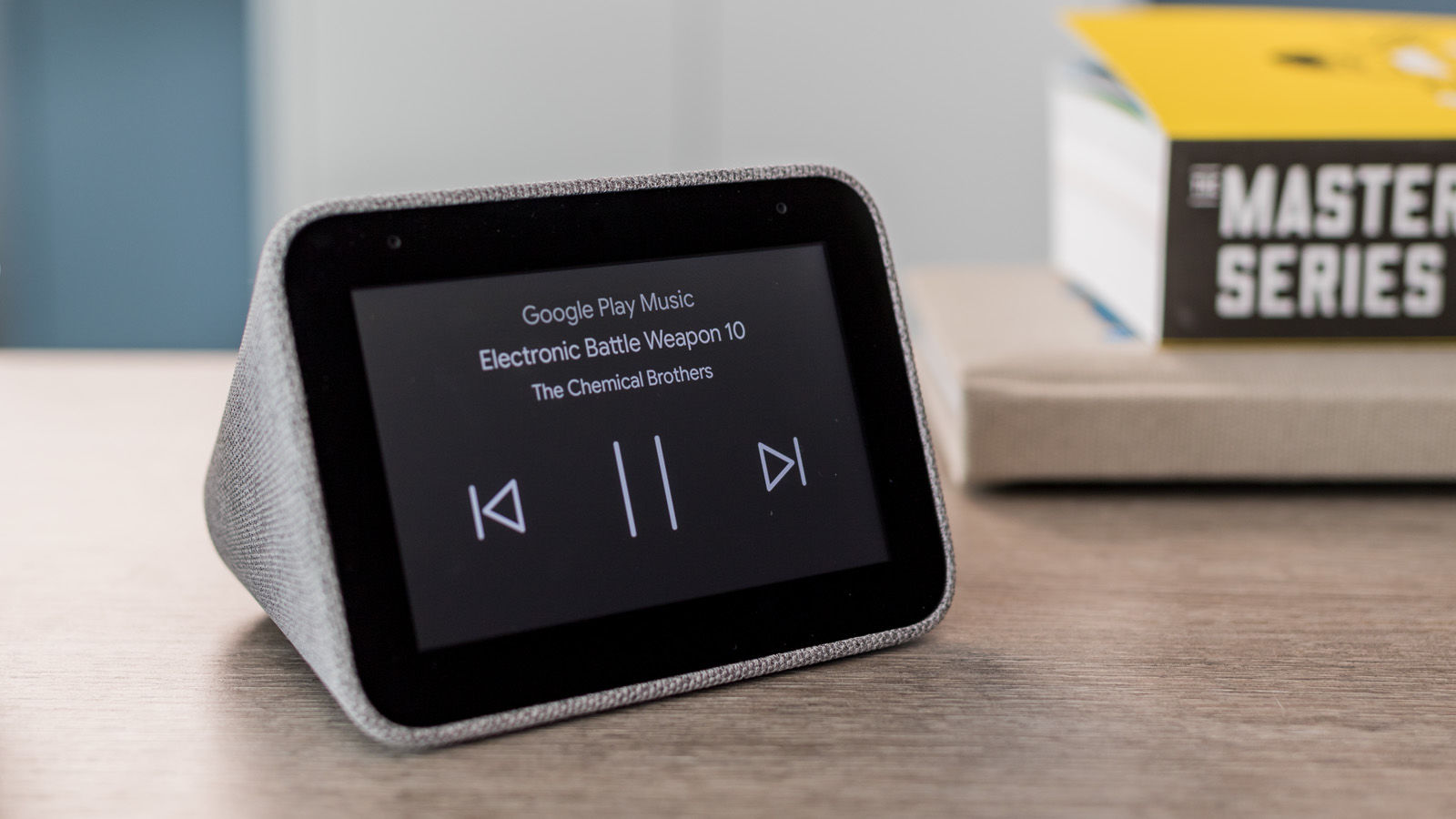 Like that device, this is a compact, affordable smart home hub – perfect for talking to the Google Assistant or controlling your other smart home devices, but less well-suited to music playback. There is a 3 watt speaker packed inside here, but it’s quiet and tinny – enough for your alarm tone or talking to the Google Assistant, but it’ll get on your nerves if you ever try to listen to much music or radio off it.

If you do want to listen to music, you can link this to other Google Assistant speakers or any regular speakers with a Chromecast Audio attached. Unfortunately, although there is Bluetooth 5.0 built into the hardware here, you can’t connect the Smart Clock to other speakers over Bluetooth, so you can only take advantage of existing speakers in your bedroom if you connect them to a Chromecast. Still, the Google Home Mini didn’t include Bluetooth connectivity at launch, and added it down the line, so I’m hoping Lenovo makes the same move eventually. 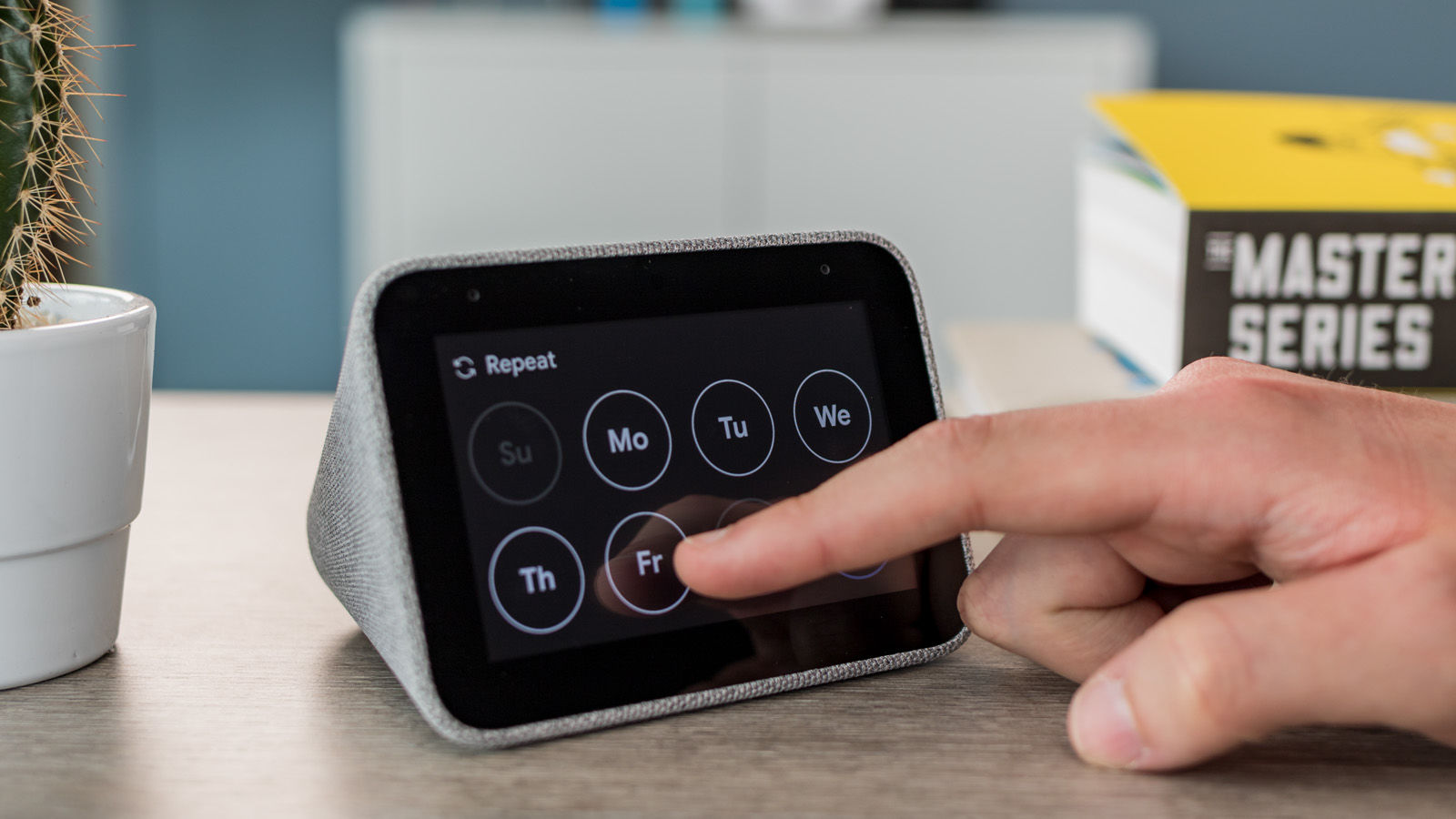 The added benefits of the screen mostly relate to simplifying your routines first thing in the morning or last thing at night. For example, if you ask Google to set an alarm for the next morning you’ll get on-screen options to control if and when it repeats, what alarm tone to use, and whether to trigger a routine with the alarm. These are all the sort of granular details that you want control of, but which are just too fiddly to really try to set up by voice.

One of the other benefits of the screen is that it means you can also use the Smart Clock as a sort of basic light alarm. This optional setting turns up the brightness of the display slowly ahead of the alarm going off, in the hope that your body will fire off all the right hormones to let you wake up naturally and comfortably. This definitely doesn’t work as well as a dedicated light alarm – we’ve reviewed a few here – but as of yet none of the best feature smart home support.

That’s not the only smart use of screen brightness. There’s also an ambient light sensor, so that the Smart Clock can adjust brightness to current light levels – dimming the screen and even activating an optional grayscale mode so that the screen is comfortable to read in the dark, and the light doesn’t interfere with your sleep. 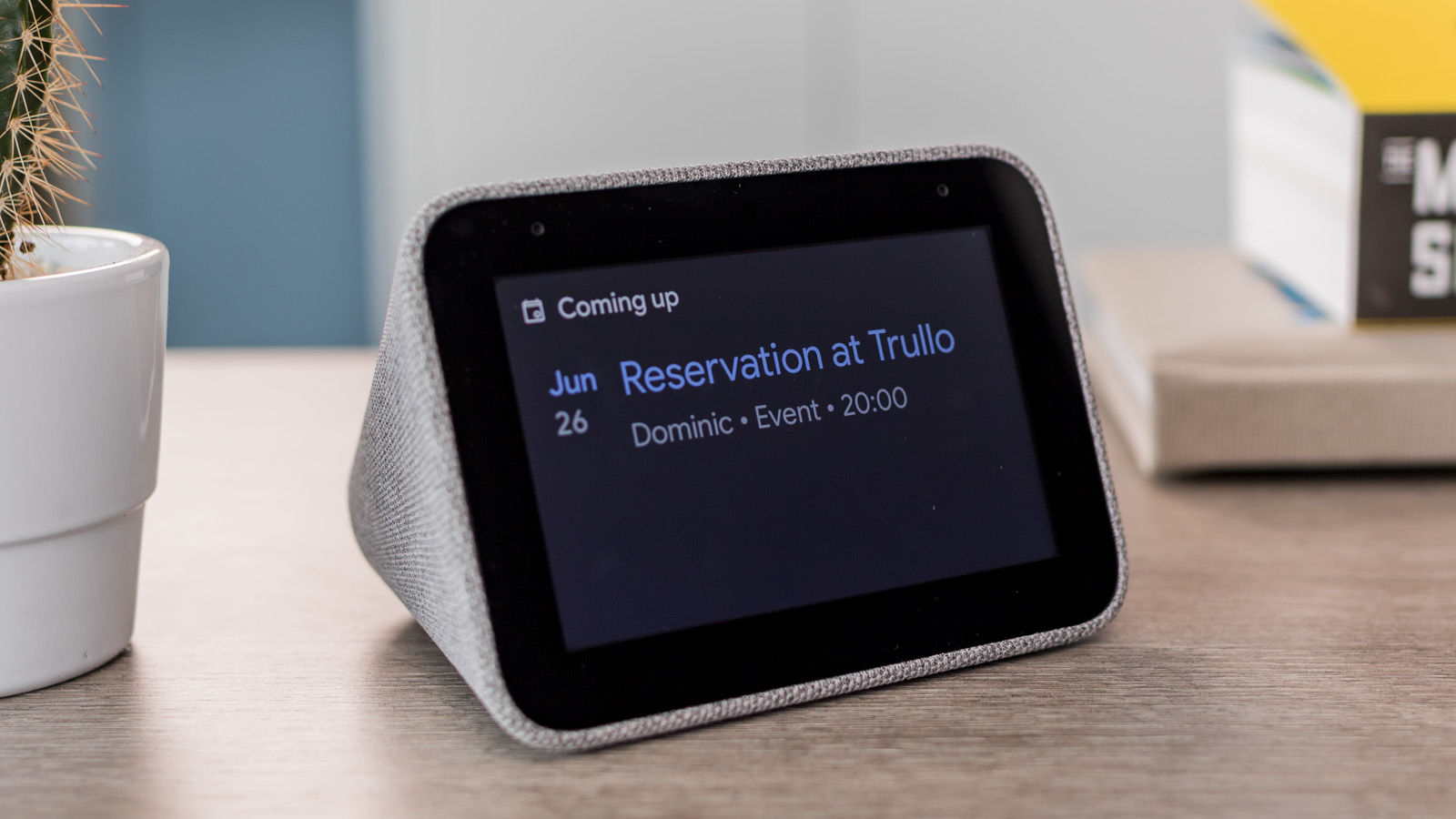 Just as importantly, and in one of the few nods to a classic alarm clock, you can whack the top of the device (gently…) to snooze, which is the only level of interaction I’m personally capable of in that moment. If you prefer, there are also on-screen stop and snooze buttons, and voice commands too of course.

Once awake, you can flip through the clock display, your calendar, the weather, commute info, or the news highlights. Of course, as with any Google Assistant device you can also set up set routines, so that the trigger ‘Good Morning’ could turn on the heating, start your smart kettle, and switch the radio on, all at once. You could also have that routine trigger automatically with the alarm, though this doesn’t play as nicely if you’re a natural snoozer like myself.

At the other end of the day, you can similarly set a bedtime routine to dim the lights or play certain music. Then you can set an alarm, though the device will also recommend alarm times based on your upcoming calendar events – useful if you don’t have a fixed schedule. 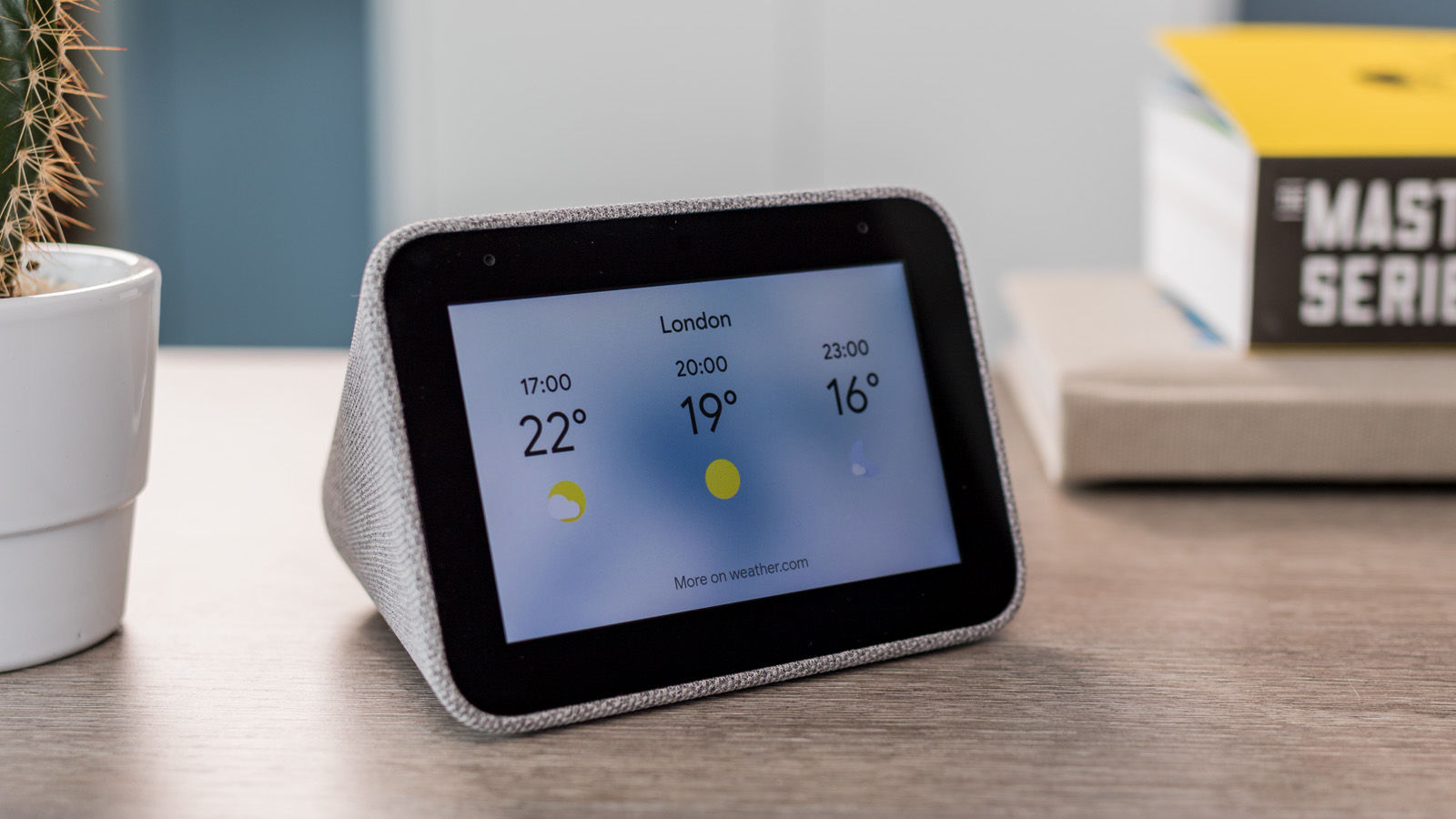 The Lenovo Smart Clock is a fairly simple concept – a Home Mini with a screen – but slick design, a simple interface, and smart features around screen brightness make it a surprisingly compelling offering. The only real downside is the lack of Bluetooth support – the main Home Mini feature missing here – but everything else about this does exactly what you want it to.

Most importantly, at £80/$80 it’s not all that much more than the regular Home Mini, making it all too easy to justify the jump from smart speaker to smart clock.