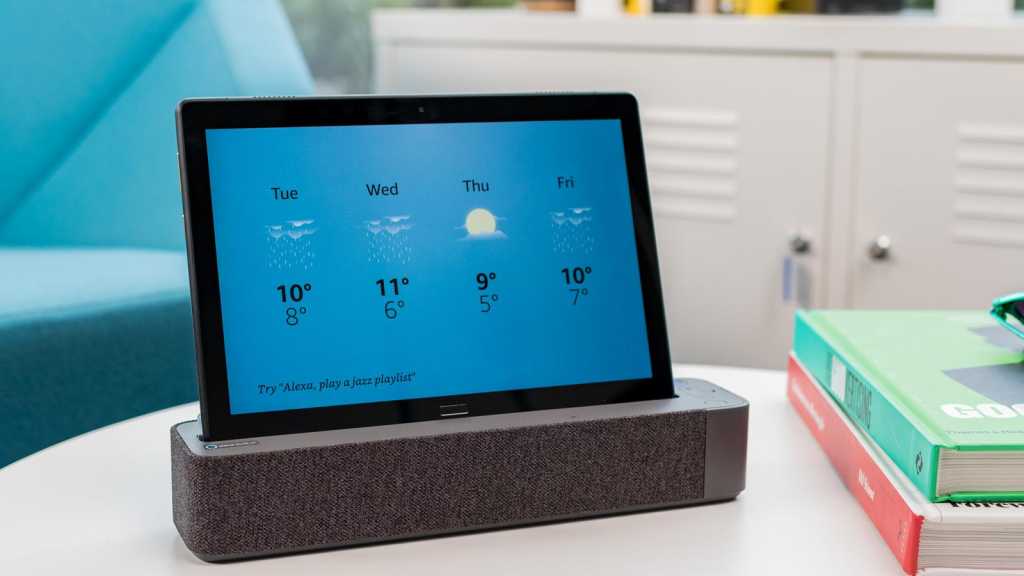 The P10 is ultimately a fairly budget tablet, with lightweight specs, old software, and a simple feature set, masked in part by slick-but-simple design that leaves it looking and feeling more premium than it really is. If it wasn’t for the included dock, this would be fairly unremarkable, so it’s really only worth buying if the idea of a tablet that doubles as an Echo Show really speaks to you.

As Google and Amazon began to introduce smart displays to the market, pretty much the first question anyone asked was: why not just use a tablet? It seems that Lenovo at least has taken the criticism to heart, using CES 2019 to unveil the Smart Tab P10: an Android tablet that boasts Alexa support and is sold together with a speaker dock.

Designed to offer the simplicity of the Echo Show or Google Home Hub – or Lenovo’s own Smart Display – while pairing it with the convenience and portability of a tablet, this seems like an obvious win, though it faces obvious competition in Amazon’s Fire tablets, which come with the option of a charging dock that accomplishes the same thing.

The first thing to be aware of is that there are two models of the Smart Tab: the M10 and the P10, with differing designs and prices to match. We’ve reviewed the P10, but a lot of this review will equally apply to the cheaper M10.

One unexpected option we’ve also seen in the UK is to buy the P10 tablet on its own – without the dock – for £199.99. That might hold some appeal as a budget Android tablet, a market which has been almost entirely dominated by Amazon’s Fire tablets for the last few years.

The most perplexing part of the whole package is that as of now Lenovo has no plans to sell the dock separately – which means you can’t drop a few docks around your home and use the same device docked in the kitchen for recipes, then in your bedroom for YouTube.

On the other hand, Amazon also lets you buy the dock on its own for £50/$55. You can also spend less by opting for the smaller 8in model, an option Lenovo doesn’t offer.

The easiest way to think of the Smart Tab P10 is that it’s actually a bundle of two products: a 10-inch Android tablet together with a charging dock and speaker.

The tablet itself isn’t anything too outlandish from a design perspective, but it’s surprisingly attractive for the price. It’s a fairly typical black Android tablet, with a 10in LCD screen, USB-C, and a headphone jack. The front also includes a fingerprint sensor and a camera, both built into the long edges of the tablet – reflecting the fact that you’re mostly expected to use this docked in landscape, rather than in portrait.

There’s another camera on the rear, which is encased in glass – on the cheaper M10 it’s just metal though – with a black finish that looks great aside from the inevitable fingerprints. One of the most attractive touches to the whole thing is a thin strip of burnished metal that runs all the way around the edges of the device – it’s a subtle flourish, but one that elevates the whole package.

The only real giveaway – externally at least – that this is not an expensive tablet is the bezels, which remain pretty substantial all the way round the screen. A bit more bezelling is helpful on a tablet of course – unlike a phone, you probably need some space on the front to rest your thumb as you hold it – but the bezels here are still pretty hard to miss.

The P10 also boasts four front-facing speakers (the M10 only has two), and while they sound fairly solid, they’re likely to matter even less than they normally would in a tablet, as most of the time when you want to watch video or listen to audio you’ll probably be doing it through the dock.

That at least is identical no matter which model you buy. The squat dock has a dark grey, fabric speaker that wraps all the way around, so you can position it however you’d like from an audio perspective – though since the screen can only face one way, that’s really going to dictate things.

There are a few simple buttons – Bluetooth, volume controls, and a mic mute – and a little plastic stand at the back to keep it stable with the tablet in, but otherwise the dock is, much like the tablet, simple and functional. It’s not going to win any design awards, but it’s a clean, modern design that should fit into most homes.

So what do you get from the dock? The tablet attaches using simple pogo pins, which charge it while it’s in the dock, but all the actual data transfer is handled via Bluetooth 4.2. The tablet will pair with the dock automatically every time you connect it, so there’s minimal faff, and once it’s all setup this pairing only takes a few seconds each time.

In addition to pairing, when docked the tablet switches into Show Mode – the same software mode that allows Amazon Fire tablets to double as Echo Show devices too. This gives you a simplified view that lets you access Alexa services like recipes, the weather, or Prime Video, without fighting through the whole of Android.

While docked, this is essentially an Echo Show then, devoting the screen to all things Alexa. And yes, it’s Alexa, not Google Assistant – despite the fact that this runs Android, and that Lenovo partnered with Google on its previous Smart Display. Google Assistant is still baked into the tablet itself thanks to the Android OS, but there’s no dock-friendly Show Mode for it.

There are some advantages to the dual-assistant setup here, though fewer than you might think. The obvious one is YouTube – Amazon and Google’s ongoing feud has seen Echo devices locked out of the video platform, relying instead on using workarounds to access YouTube through browsers, rather than a dedicated app.

Since it runs regular Android, the P10 does feature the regular YouTube app – but unfortunately Alexa can’t open it anyway. The Google Assistant can – but not while the device is docked in Show Mode, which locks Google out. So to watch YouTube while the device is docked you’ll have to dock it, swipe down on the screen to exit Show Mode and return to the regular OS, and then use either voice commands with Google or touch controls. It works, but it’s awkward, and not really any better than the equivalent workarounds on Amazon’s own devices.

Since the dock also packs a speaker, sound quality is solid at least. Bass is naturally limited, but it’s fairly punchy, and loud enough for filling a kitchen while you cook – though naturally if you have a bigger home speaker system around you might prefer to run the sound through that anyway.

So this is a pretty good smart display for the most part, but it’s a bit more average as a tablet. RAM ranging from 2 to 4GB is low – though not entirely unreasonably for the price – while the 1.8GHz Snapdragon 450 processor is fine, but not fast. It’s even shipping with Android Oreo 8.1, rather than the more recent Pie.

That all translates to noticeable lag when switching between apps (and even sometimes within Show Mode), and slow performance loading web pages and the like. Graphical benchmark results are also poor, meaning this thing will struggle to play anything more than basic games. Basically, it’ll be fine for checking your emails, browsing the web, watching YouTube, or using Alexa, but it’s not the tablet for you if you have any more demanding needs than that.

Battery life is one of the tablet’s more surprising strengths. The 7,000mAh cell lasts 15 hours according to Lenovo, and managed 13.5 hours in our non-stop battery test – a seriously impressive score. It’s only surprising because of all tablets, this is one that probably doesn’t need such phenomenal battery life, as half the time you’ll keep it docked anyway. It is worth flagging that the M10 won’t last as long though – it has a slightly smaller 4,850mAh battery, so is likely to cap out around 10 hours.

As for cameras, you’ll find a 5MP shooter on the front of the tablet, and 8MP on the rear. As always, we wonder who really uses the rear camera on a tablet at all, but the front-facing lens will be more useful for video calls and the like. Image and video quality is fairly crisp here – it’s not going to wow you, but it’s more than enough clarity for reliable video calls, which is really all that matters.

This is ultimately a fairly budget tablet, with lightweight specs, old software, and a simple feature set, masked in part by slick-but-simple design that leaves the P10 looking and feeling more premium than it really is. If it wasn’t for the included dock, this would be fairly unremarkable, so it’s really only worth buying if the idea of a tablet that doubles as an Echo Show really speaks to you.

The problem is simply that Lenovo didn’t get here first. Amazon did with its Fire tablets, and with the added bonus that you can buy extra Show Mode Docks for different rooms – versatility that Lenovo simply doesn’t offer – not to mention the option of saving money by opting for an 8in model.

It might still be worth opting for the P10 if you want full access to Android and YouTube – rather than Amazon’s stripped back FireOS – or if you know you’ll make use of the dock’s built-in speaker, rather than simply connecting it up to another sound system anyway. If those are worth paying a little extra for the hardware and limiting yourself to one dock, then go ahead. If not, stick to a Fire tablet – or just a plain old smart display.