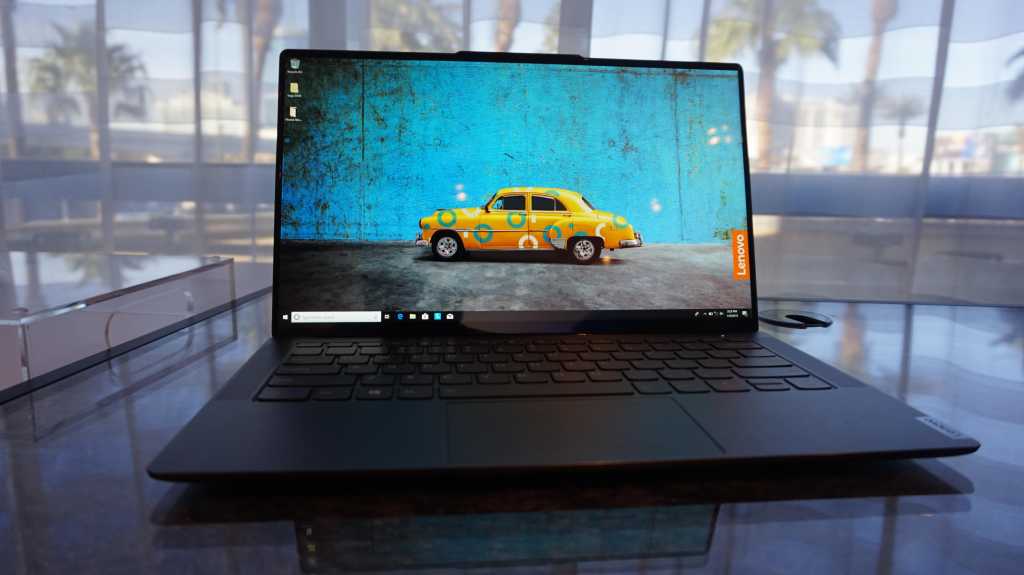 The Yoga S940 is set apart from the crowd by its display. The contoured glass not only makes it a pleasure to look at and use but also allows the already tiny bezels to appear even smaller. The hardware under the hood is nice and powerful and it’s a great looking device in a compact package. With full pricing yet to be confirmed, it’s exact place is the market remains to be seen – but you certainly wouldn’t be disappointed with this device.

Lenovo has been the lumbering juggernaut of the laptop world for a while, producing solid devices to be sure – but sometimes lacking a little bit on innovation or style. The Yoga S940 is the product of an extensive effort to make the viewing experience better and that certainly comes across.

This laptop will be fairly instantly compared with Asus ZenBook 13S we also saw at CES 2019. Both of them focus on the visual experience with some impressive specs under the hood to make them run smoothly.

This should be roughly comparable to the Asus ZenBook 13S which should be coming out at around the same time.

As always, if you’re in the market for the best deal on a laptop then make sure you take a look at our best laptop deals article.

The focus of the Yoga S940 is all on the screen. This will either be a 4K display with HDR400 support or a 1080p Full HD model with Dolby Vision HDR.

The 13.9in screen appears to gently fall away at the edges thanks to the contoured glass, making the already tiny bezels seem even smaller – while the webcam is housed in a ‘reverse notch’ above the display. This allows the top bezel to be much smaller with the notch sitting atop the screen, which on paper sounds very strange, but in practice actually looks pretty good.

This is in contrast to the Dell XPS 13 for 2019 which has a webcam in the small top bezel without the need for a notch.

The contoured glass will be familiar to you if you’ve used any recent Samsung Galaxy Smartphone models – the edges of the display are slightly rounded to give the impression of a wider screen and its a welcome addition to the device without a doubt.

The webcam supports a bunch of nifty features, including facial recognition and eye tracking with the ability to move content to different displays with just a glance. Sounds very cool indeed, but lets wait and see how well it works – you don’t want to glance at your watch and have your word document disappear off the side of your screen.

The laptop is light and tightly designed as you would expect for a 13in variant (well 14in really). It’s well built and looks great too, being extremely thin and very pretty.

The Lenovo Yoga S940 will feature 8th-generation Intel processors, as with most laptops of this price range released this year, with the Core i7-8565U being the most powerful on offer. No discrete graphics here though sadly, as you’ll have to make do with Intel HD 620 integrated – so no strenuous gaming.

The CPU and GPU will be supported by up to 16GB of RAM, and up to 1TB of storage in the form of an SSD.

The battery life will vary depending on which display you opt to go for – the Full HD display will get you roughly 17 hours while the Ultra HD will net you less than half of that at around 7.5 hours. These numbers aren’t something we’ve been able to test ourselves, so please take those times with a pinch of salt.

The port offering is nothing to be sniffed at either, as you’ll find two Thunderbolt, USB-C, USB 3.1 and a headphone jack.

The Yoga S940 is set apart from the crowd by its display. The contoured glass not only makes the display a pleasure to look at and use but also makes it unique in the space, allowing the already tiny bezels to appear even smaller.

The reverse notch is something we’re sure to see more of in the future and it doesn’t look unpleasant at all, and the rest of the device looks and feels like a premium product – backed up 8th generation Intel processors, supported by impressive hardware.

As ever, with exact pricing yet to be confirmed, it’s difficult to compare it to the immediate competition – but it’s an extremely pretty and capable device none-the-less.