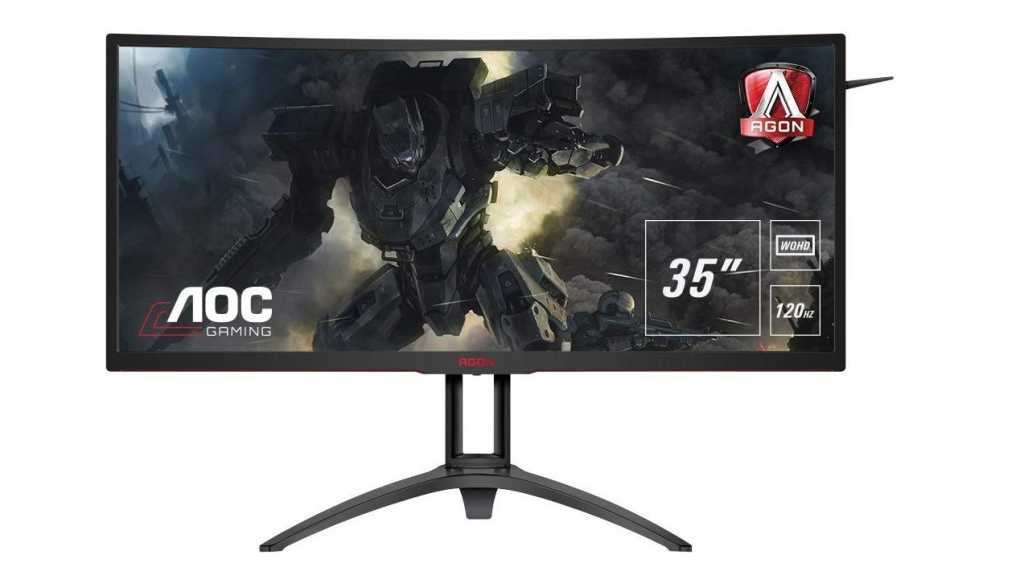 If you can afford it, the AG352UCG6 will not disappoint. It’s bright, vibrant and fantastic for racing games in particular. The menu system and joystick control takes a while to get used to and you’ll need to tweak settings to get the absolute best out the display.

But it is worth the money? This model is a little more expensive than the one it replaces – the AG352UCG – but has a new panel which runs 20Hz faster, offering G-Sync at 120Hz.

You can buy an AG352UCG6 from Amazon for £784, which is a little lower than AOC’s list price. We also saw it on sale at Box.com for £734.99, but this deal is unlikely to last long. You’ll find it for a similar price in the US, again from Amazon, considerably lower than the $890 list price.

These prices are par for course: you’ll pay roughly the same money for other 35in curved ultrawide monitors with G-Sync. AMD Freesync versions are a bit cheaper, but big, curved ultrawide screens only drop below £550 when resolution goes down to 2560×1080. For alternatives, see our roundup of the best gaming monitors.

The first thing that strikes you when you see a 21:9 aspect ratio screen is that it looks like a dual-monitor setup with no awkward bezels in the middle, dividing the Windows desktop.

The AOC AG352UCG6 has an 1800R radius, which means it’s a bit more than subtly curved. This is great for gamers since the drawbacks of using an MVA panel – notably the limited viewing angles – become irrelevant when you’re sat in the sweet spot playing your favourite game.

At around 850mm wide, you’ll need a fair amount of space to accommodate this screen. Although the three-pronged stand adds a slightly more menacing appearance than a traditional flat-bottomed version, it’s a lot less practical as you lose that space on your desk and can’t really place items under or around it.

Made from metal, it’s certainly sturdy and keeps the big screen steady. Overall build quality isn’t up to the level of, say, Dell’s UltraSharp U3419W, and AOC’s design isn’t at slick.

The plastic screen bezels are thicker and the panel sits recessed rather than flush. However, the matt finish is the same, which minimises reflections.

Ports are divided into two sections, with the two video inputs on the bottom edge. You’ll likely use the DisplayPort input, rather than the HDMI 1.4, but you might hook up a games console via HDMI as a secondary device.

Unusually, AOC uses a microUSB 3.0 connector to supply the pair of downstream (and full size) USB 3.0 ports, and there’s a minijack socket for your headphones along with a useful flip-out headphone hanger on the right-hand side of the monitor, just as on AOC’s previous gaming monitors.

Two LED strips run along the bottom edge at the front, and there are four more on the rear inlaid in the silver ‘wings’. Via the OSD you can choose from red, green or blue at various brightness levels, but it’s a shame there’s no way to adjust the RGB levels and choose your own hue, or even sync it with the RGB in your PC, mouse and keyboard.

Talking of the OSD, AOC opts for a five-way joystick mounted centrally in the bottom edge of the monitor. At first this feels unintuitive, but it soon becomes easy to work and offers quicker navigation than a lot of multi-button interfaces.

Pulling it forward gives quick access to the speaker volume, and left lets you quickly switch between the two inputs. You’re unlikely to want to use the speakers, however, as they’re quite tinny and won’t to games or music justice.

The stand offers height adjustment, tilt and swivel. The latter isn’t smooth –  it’s so stiff that you wouldn’t necessarily realise it was possible to turn the whole panel left or right. Again, though, this is rather irrelevant in the context of gaming.

AOC has fitted a different 8-bit panel to the one used in the AG352UCG, but it still uses the same VA technology. In general, this means great colour performance on-axis, better contrast than IPS, but more limited viewing angles.

There’s an sRGB mode which AOC claims covers 100% of the sRGB gamut. And our colorimeter supported this, but it’s worth knowing that sRGB mode locks out most of the controls including brightness. So if you want sRGB, you’ll have to put up with the screen at maximum brightness, which we measured a bit over AOC’s 300 nits claim. And that’s too bright for most people wanting comfortable indoor viewing.

You’ve a choice of other presets including Gaming, RTS, FPS and Racing. Within each preset you can tweak a number of settings including shadow control, gamma as well as colour temperature. If you care about colour accuracy and have a colorimeter to calibrate your displays, you’ll probably want to start with Racing mode and bump up shadow control a little.

Colours are fantastic. We found they were well saturated with no noticeable banding between similar shades. Contrast was a little lower than the claimed figure of 2500:1 at closer to 2200:1, but that’s still considerably higher than you’d get with an IPS display. It’s important to note that this wasn’t at maximum brightness,

Black levels are good, but not quite as inky as we’d hoped. However, overall, image quality is excellent and though you can nit-pick and find a few less-than-perfect results in technical tests, they don’t represent real-world use for the audience this display is aimed at. For example, displaying a single shade of grey across the whole screen we noticed a few patches of slight unevenness in the backlight. But this is a trait that is specific to our sample, and it wasn’t noticeable in normal use.

In actual games, the AG352UCG6 is awesome. We tested it over DisplayPort, connected to our GTX 1080 Ti with several titles including Forza Horizon 4, which supports the 21:9 aspect ratio. You get an incredible in-car view that you can only dream of if you’re using  a 16:9 screen. And G-Sync means everything remains perfectly smooth and tear-free when you’re doing 180° drifts around hairpins.

You’ll find the same silky smooth panning in other types of games including RPGs, but if FPS is your domain you may want to opt for a display with an even higher refresh rate, and you’ll find that some don’t support 21:9 anyway. So do check that your favourite titles work in 21:9 before committing the cash. AOC makes a 200Hz 35in curved display, but the AG352QCX has a lower resolution of 2560×1080 – though it is considerably cheaper at £529 from Amazon UK.

It’s expensive, but this is partly because of the size, resolution and curve, but also because it supports Nvidia G-Sync up to 120Hz. You can spend less if you don’t need one or more of these features, but if you do, it’s not bad value at all. Colours are great, and contrast is good. Once you’re used to the joystick, it’s not even too annoying to change settings. Really, though, you’ll want to buy this monitor if you’re after a top-quality gaming display to use with a powerful Nvidia graphics card.