Metro Exodus is a work of art; from the concept to design and gameplay, it ticks all boxes. It has an emotional campaign, various open-world environments full of unique flora, fauna and places of interest to explore, fantastic audio design and satisfying gunplay. What more could you want from a tight narrative-driven first-person shooter?

Metro Exodus is set two years after the events of Metro: Last Light, and tells the story of Artyom and the Spartan Rangers’ journey across Russia in hope of finding somewhere to settle down once and for all. It’s certainly one of the  most anticipated games of the year, but is it one of the  best first-person shooters?

We at Tech Advisor have spent well over 20 hours exploring the post-apocalyptic world and fighting our way through the engaging, emotional campaign of Metro Exodus. It really is a treat, and we’ve found ourselves wanting to replay particular missions even after completing the game – and that’s saying something. Find out why we’re so impressed in our Metro Exodus review.

Metro Exodus certainly isn’t far away, with the game scheduled for release on 15 February 2019 across PS4, Xbox One and PC.

If you haven’t already, you can pre-order the game right now from the likes of  Amazon in the UK and  Best Buy in the US, with every pre-order customer also receiving a panoramic poster depicting some of the terrifying creatures you’ll be going up against in Exodus. 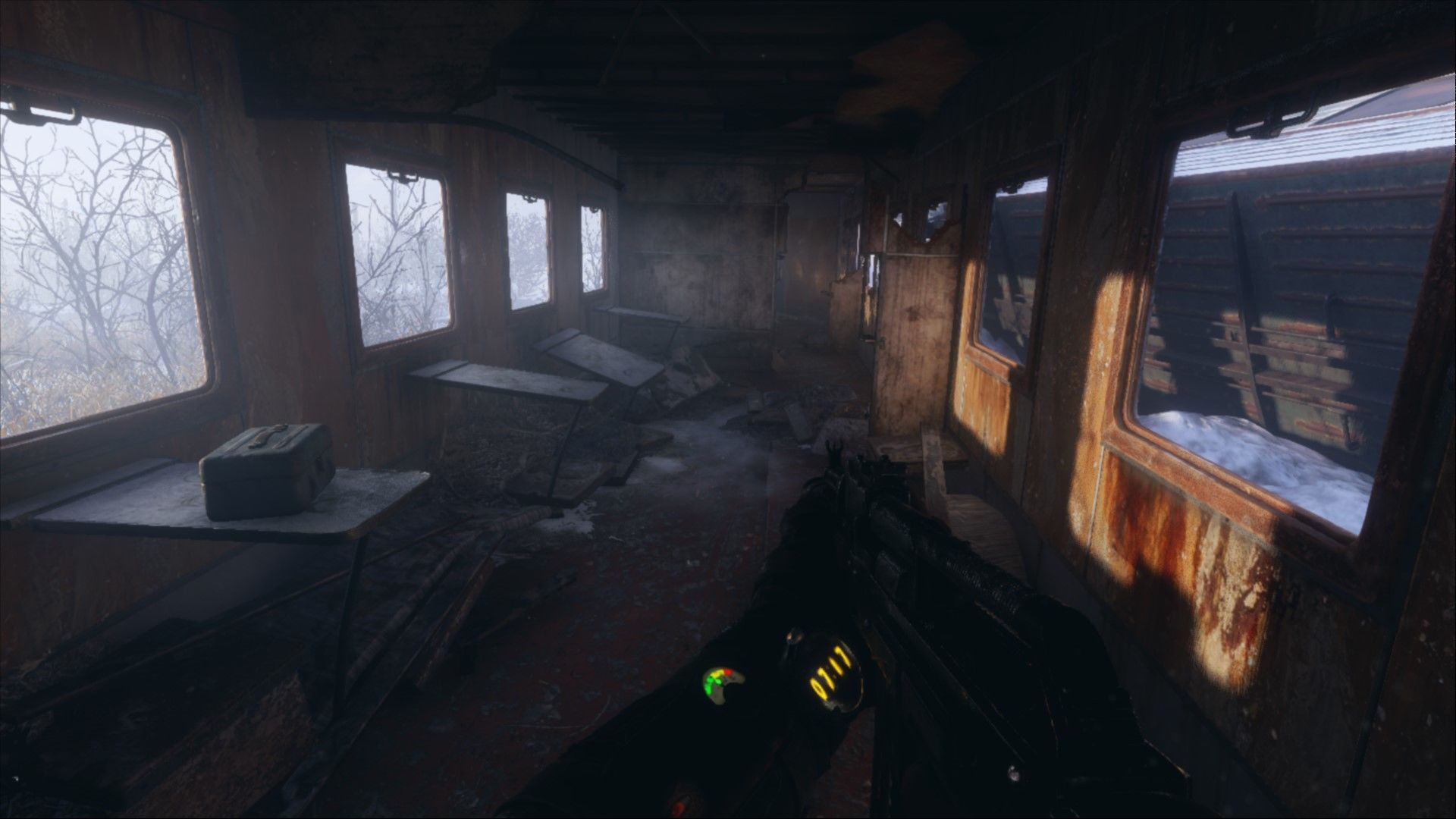 Metro Exodus is the first game in the Metro series that sees Artyom, Anna and the rest of the Spartan Order venture out from the tunnels of the Metro to explore post-apocalyptic Russia. The aim? To find somewhere free of radiation to finally settle down and live life in peace. Of course, being a Metro game, it isn’t as easy as jumping on a train and heading off into the sunset.

Metro Exodus offers a nice middle-ground between a tight narrative-driven linear story and an open world survival game that allows you to approach any given situation in a number of ways. We won’t spoil the campaign for fans, but we will say that it is engaging, emotional and thought-provoking, and is easily our favourite campaign from the entire Metro series.

The game is split into four main open-world environments (with a sprinkling of linear missions between), each representing one of the four seasons, and while you can explore freely whilst there, you can’t go back to previous locations once you’ve moved on. 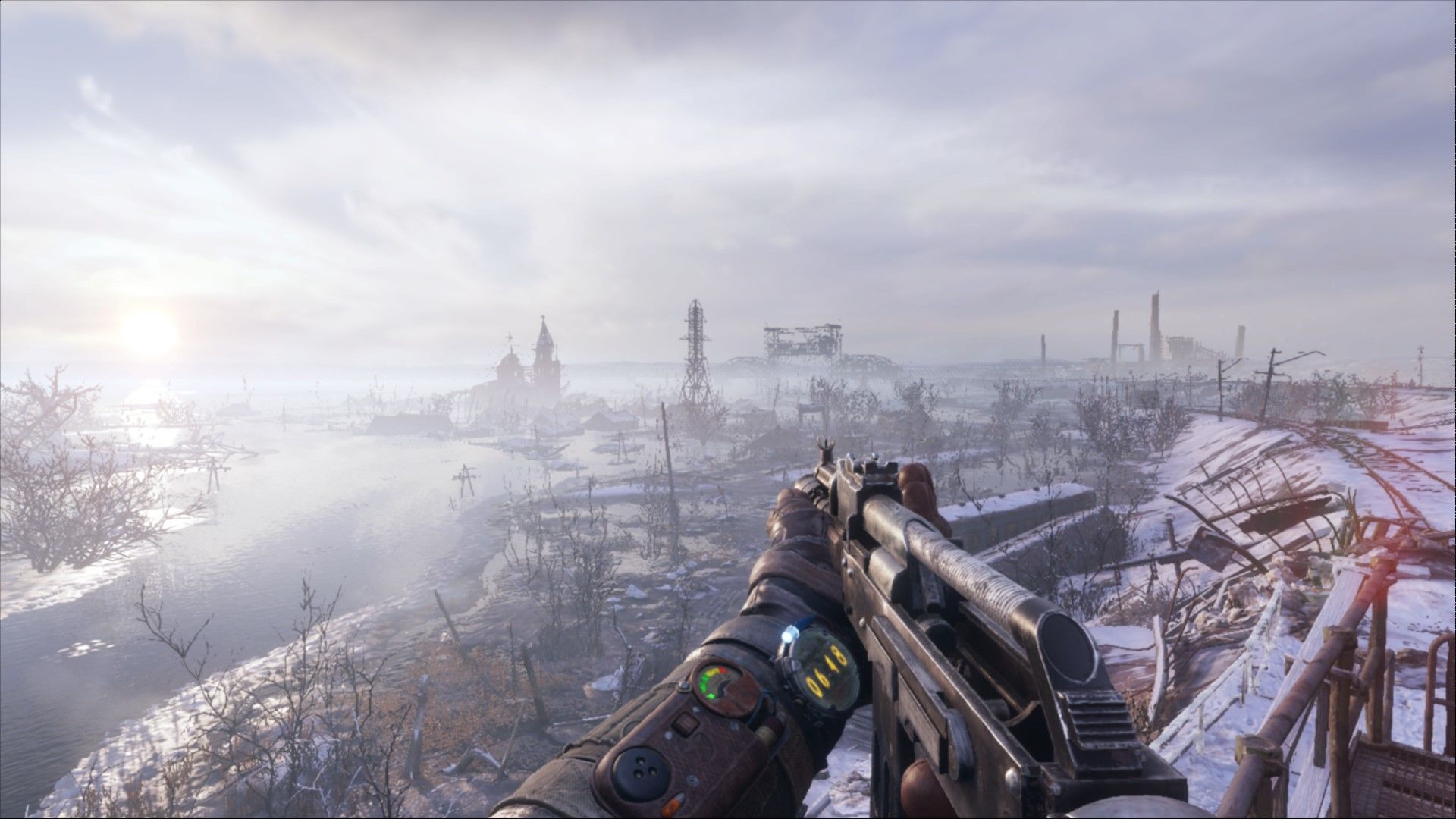 The bleak wintery Volga is the first open world that you’ll experience in Exodus, and while it may look baron initially, there’s a lot to do if you take your time and fully explore the environment. There aren’t side quests like in other open world games, but there are lots of points of interest to explore, radioactive enemies to go up against and increasingly complex weapons to scavenge. It’s the same across all environments – you just need to get your binoculars out and look.

Each biome is unique, not only in design but the kinds of mutated creatures you’ll come across, anomalies and even dynamic freak weather events. We’ve been caught in the middle of a huge sandstorm during a fight in the dry, arid Caspian Desert, as well as howling winds and thunderous storms in the Volga. The good news is that the weather affects bandits and other inhabitants in the exact same way, allowing you to be louder and get closer without enemies being alerted to your presence.

Before we go any further, we need to talk about the look of the game because, simply put, Metro Exodus looks absolutely stunning. The varied environments you’ll come across are detailed, with high-quality textures and dynamic lighting that make the world look and feel alive (or not, as it is post-apocalyptic!). The lighting is phenomenal; whether it’s the flicker of your lighter illuminating an abandoned train carriage or god rays streaming through broken windows of a desolate warehouse, it’s gorgeous. 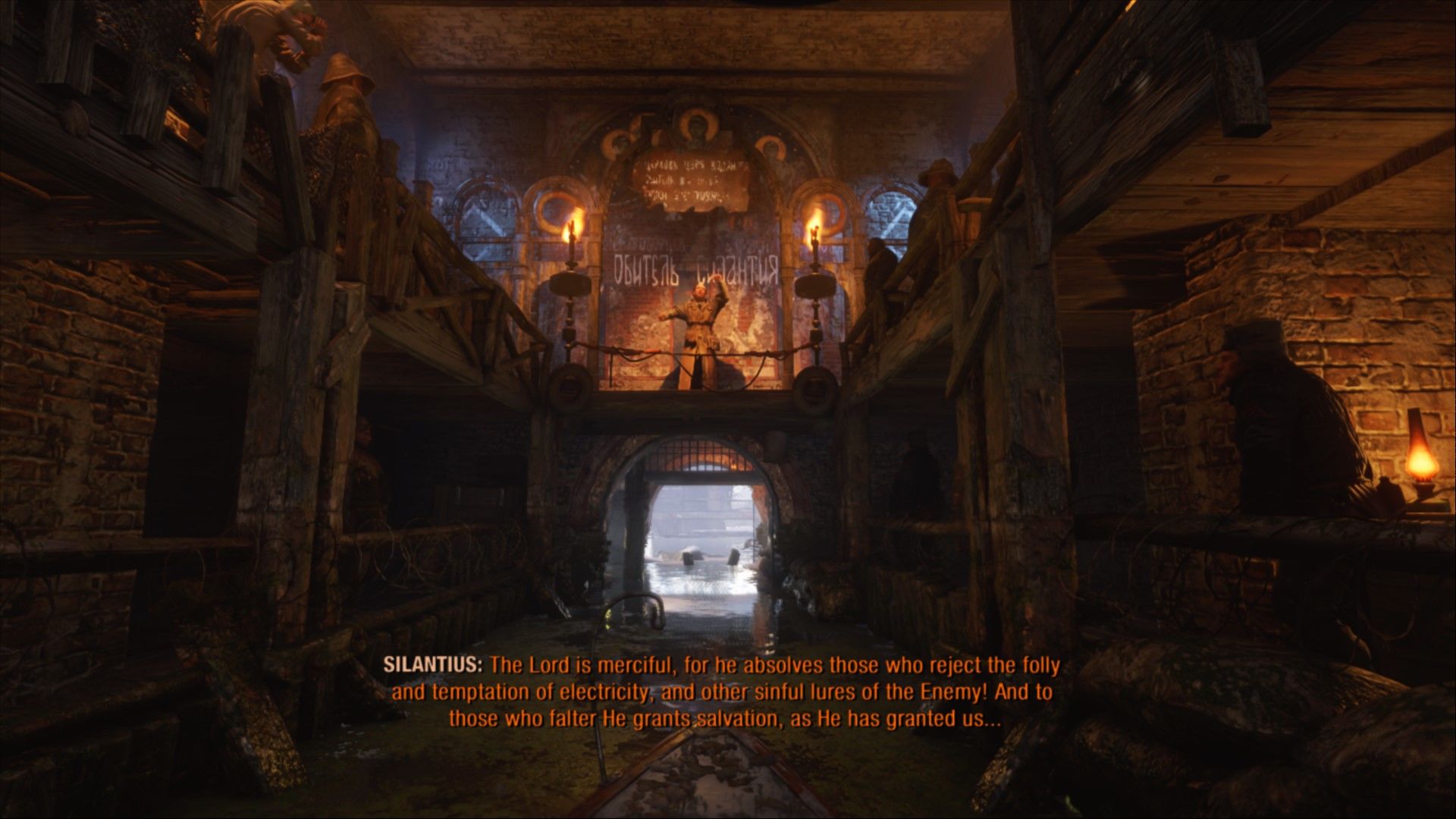 This is further enhanced by RTX support, providing real-time ray tracing support for those running the game on PC with an Nvidia RTX-series GPU. Metro Exodus is arguably one of the best showcases of the technology, providing more true-to-life lighting that bounces off objects to illuminate the environment as it does in the real world. It makes a world of difference, especially in dark environments, and when combined with the high-end graphics, Metro Exodus looks incredibly lifelike – which makes it all the more terrifying.

The minimalistic approach to the HUD system means that all the information, from the pressure of your air-powered Tikhar to the location of the next objective, are provided via physical in-game objects. The map is a physical item that you pull out and inspect, and instead of an on-screen compass, you have to keep an eye on the compass on Artyom’s arm.

It’s a similar story with gas filters; whenever you put a gas mask on, the timer on your arm will display how long you’ve got left until you start breathing in radiation. It’s easy to miss in the heat of battle, and helps fuel that anxious, uneasy vibe that the Metro series is famed for. 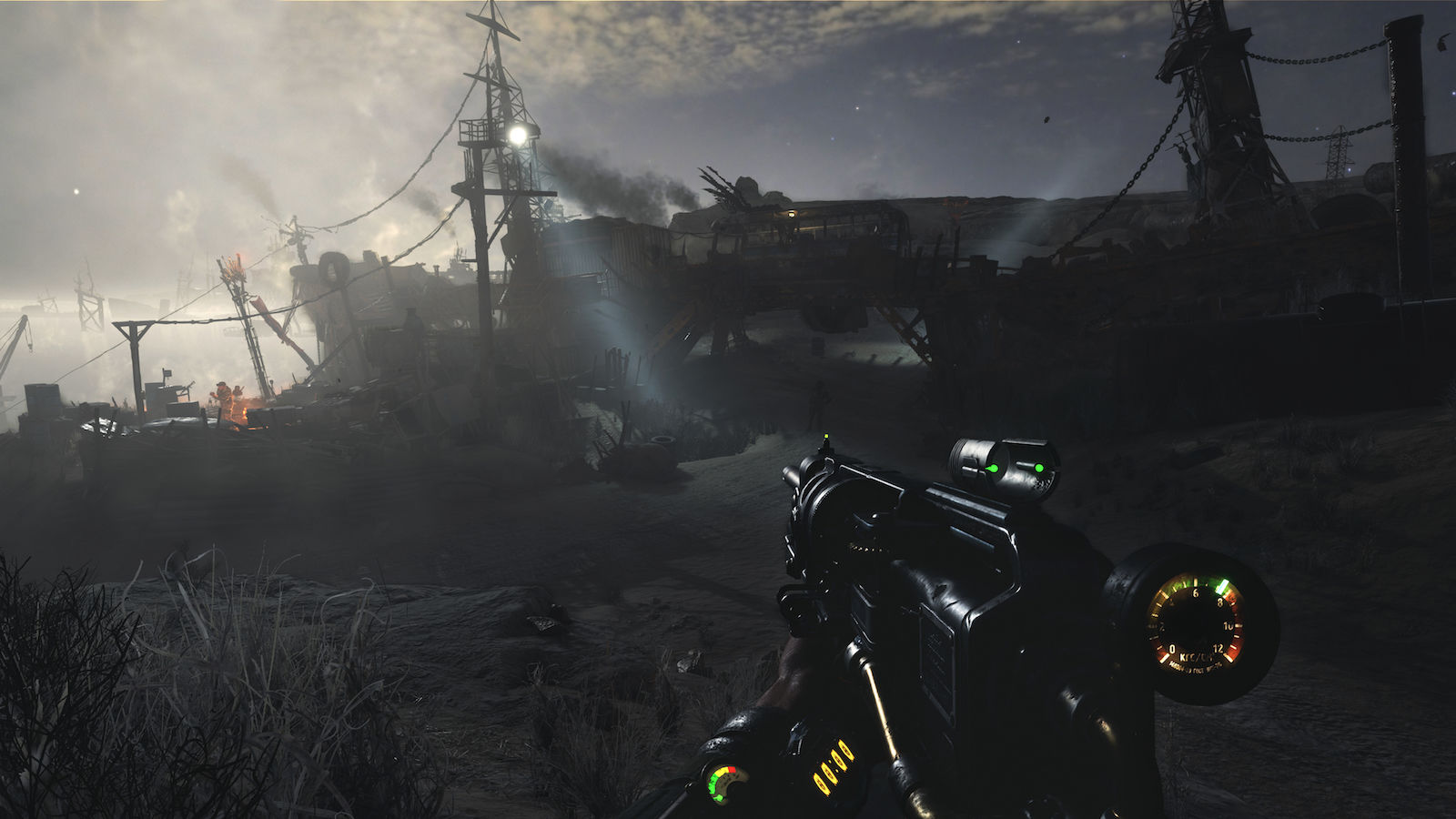 And believe us when we say that Metro Exodus is just as anxiety-inducing, claustrophobic and tense as earlier games, despite leaving the tunnels for the open world. This is achieved by creating tight, dark areas within the larger environment that are filled with monsters of all shapes and sizes. There’s one particular giant spider-infested bunker in the Caspian Desert that we won’t be forgetting in a hurry, and we’re not embarrassed to admit that we’ve jumped (and screamed) in terror at multiple points during the campaign.

It’s only possible because the tense gameplay is backed up by incredible sound design, both in terms of atmospheric audio and the game’s dynamic soundtrack. You’ll hear the scuttles of oversized spiders, the screeches of approaching mutants, crackling from your Geiger counter and dynamic communication from bandits during shootouts, helping immerse you into the bleak environment (as well as scare the absolute sh*t out of you).

This is further enhanced by Dolby Atmos support, offering pinpoint audio accuracy – which will come in handy as you sneak through dark, mutant-infested tunnels with only a naked flame to light your way. Honestly, Metro Exodus takes immersive sound design to the next level, and other developers should take note.

Apart from the thrill of being scared, the main motivation to explore the desolate wasteland is to scavenge. You’ll find scavenge-worthy items scattered across the environment, all of which can be used to create items like home-made bombs, molotovs, throwing knives, ammo and even upgrades for your suit that can add new functionality. 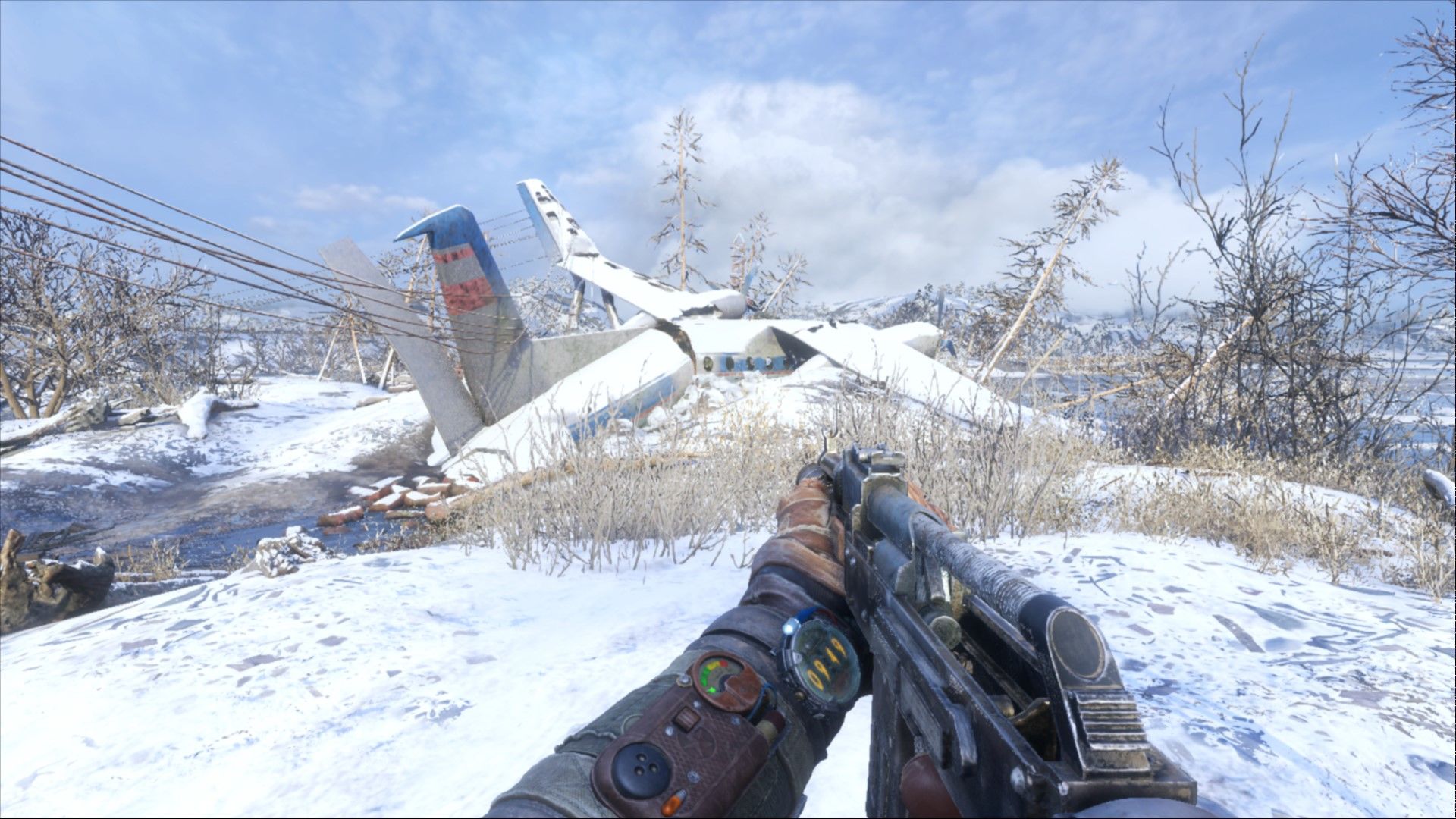 There are also points of interest that you can investigate, and while some may prove quite a challenge, the rewards are often worth it. You’ll get access to brand-new base weapons ready for customising, suit and helmet upgrades and a lot of resources to craft all the items you need to fight your way across Russia.

The highlight of the crafting system is that you can craft basic items (including medkits and replacement gas filters) wherever you are, with a dedicated crafting bench only required for high-end items, suit repairs and ammunition.

Not only can you craft items on-the-fly, but you can customise your weaponry without a workbench too. You can scrap guns that you find laying on the ground to acquire new parts that can completely change the performance of your weapon. 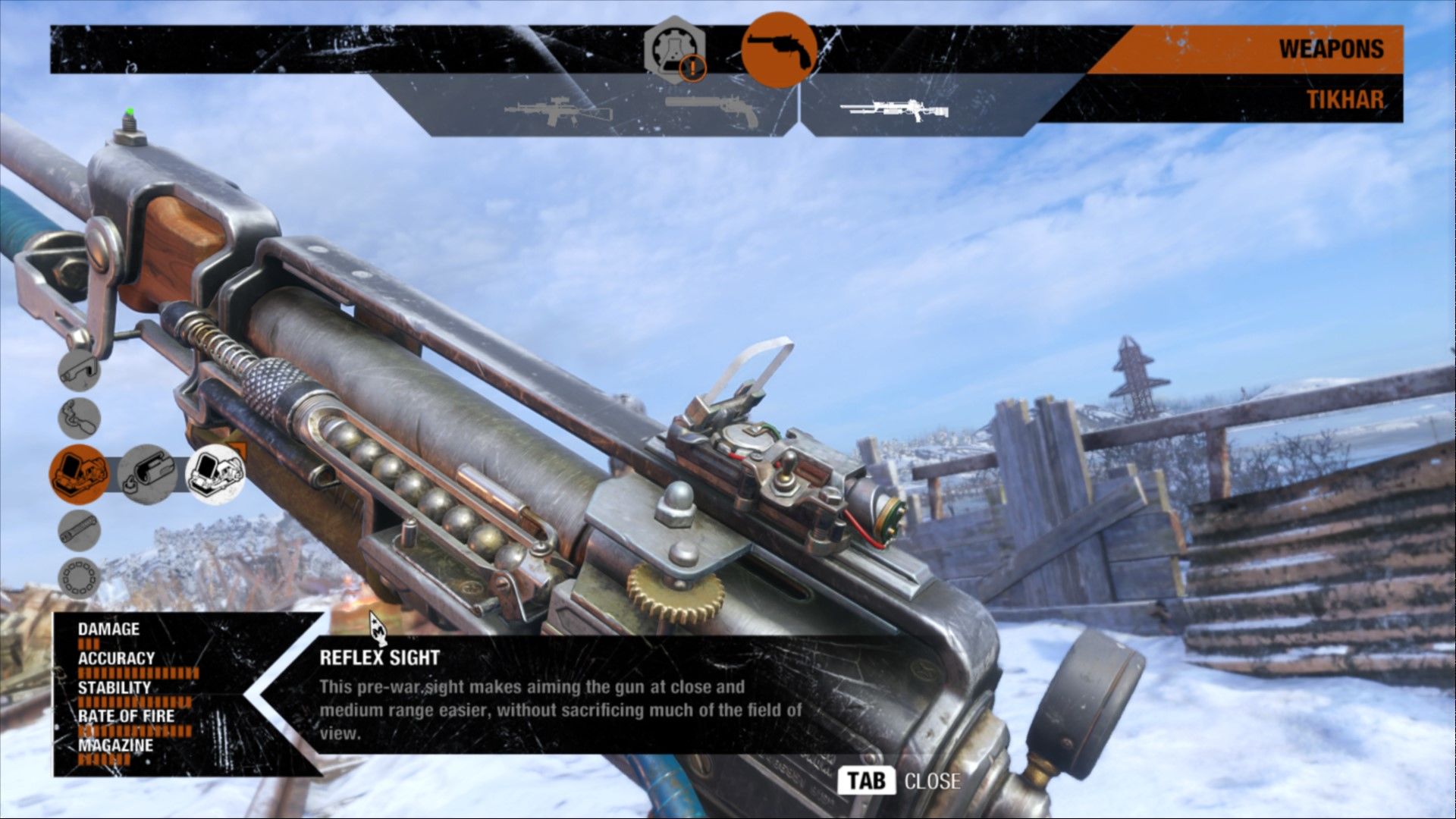 Want to make your shotgun semi-automatic with a revolver-like barrel, reflex sight and choke spread? Or do you want to fire explosive ball-bearings from a home-made air rifle from a distance? Those are some of the tame weapons that you’ll come across early on, and it gets better from there.

All parts used in the makeshift weapons should work in real life too, giving the game a little more authenticity – though how authentic a game about a post-apocalyptic world full of giant man-eating bugs is, we’ll leave for you to decide.

Be under no illusion; Metro Exodus is a tough game by design. You will run low on health. You will die repeatedly. You will run out of ammo during a firefight. But, over time, you’ll learn how to survive in post-apocalyptic Russia.

That difficulty extends to firefights too; you’ve got to think tactically and use stealth whenever possible because if you run in all guns blazing, chances are you’ll get your ass handed to you. You’re not some kind of superhuman like most protagonists in shooters, and it’s refreshingly challenging.

Metro Exodus is a work of art; from the concept to design and gameplay, it ticks all boxes. It has an emotional campaign, various open world environments full of unique flora, fauna and places of interest to explore, fantastic audio design and satisfying gunplay. It’s more punishing than many other titles on the market in 2019, and it’s refreshing – the game forces you to observe, plan and utilise stealth to take down the enemy, rather than running in all-guns-blazing and coming out unscathed like some kind of superhero.

If you’re looking to sink your teeth into a tight, terrifying, narrative-driven first-person shooter then Metro Exodus is the game for you.