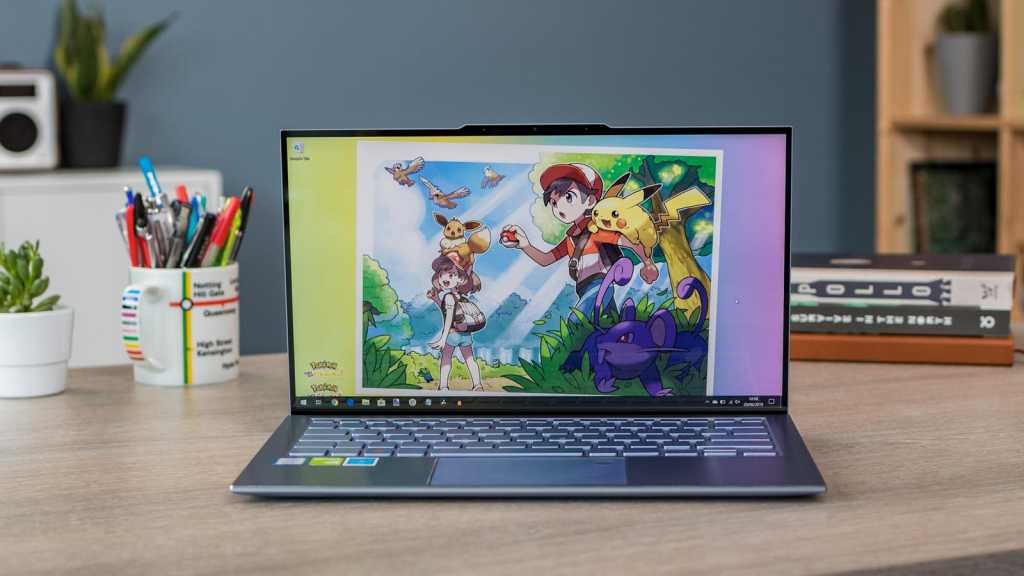 Right now you cannot find an ultrabook that crams specs like this into a body this small, and the S13 does it all while under-cutting most of the market on price. That’s not even mentioning the reverse notch, which keeps the bezels slim while providing a handy lip for opening the laptop. The silver finish might be a bit bling and the trackpad isn’t the best, but those are minor complaints. If you can afford to drop a grand and a half and want discrete graphics in an ultra-portable package, the S13 is a very easy recommendation.

Asus is further cementing its position as one of the most interesting laptop manufacturers on the market, proving that it’s not afraid to take risks and try out new form factors.

Take the ZenBook S13. The almost bezel-less design makes it look extremely clean and tight, and the inclusion of the ‘reverse notch’ places the webcam in a space where it doesn’t increase the size of the top bezel. It’s one of the more interesting designs we saw at CES 2019 – where the device launched – and earned it one of our best of CES awards.

After using the laptop intensively for two weeks – including putting it through its paces as my main device while covering E3 – I’m happy to confirm that this is a laptop that’s as powerful as it is portable and should meet most users’ needs – as long as you can afford it.

Meanwhile if you’re in the US the price is $1,399.99, and you can grab it for about that much from Amazon, Walmart, or Newegg.

One quick note: whichever country you’re in you get the same i7 processor, MX150 graphics card, and 512GB SSD, but if you’re in the US it’s paired with 8GB of RAM, while in the UK it jumps up to a nippier 16GB. That’s the version we’ve tested here – but otherwise the two models seem to be identical.

In terms of a price comparison the 2018 ZenBook 14 started from £999/$1,199, making this a little more expensive – but given the inclusion of a discrete graphics card and the slimmer design, the price bump makes sense.

Look outside Asus and the pricing seems even better than some of the other best laptops around. It’s cheaper than the top-spec Dell XPS 13 – which doesn’t include a GPU – and it’s a similar story with the Huawei MateBook X Pro or Microsoft Surface Laptop 2. Just about the only laptop that matches it for specs and beats it on price is the HP Envy 13, which clocks in at £1,099/$999 for very similar specs, but is bigger, thicker, and heavier despite a smaller screen and worse battery life.

When looking at the device for the first time the biggest impression comes from the screen. The bezels are almost non-existent on the sides and also on the top, making the viewing experience extremely slick as the display almost touches the edges of the laptop. This design allows for a staggering 97% screen/body ratio on the 13.9in display, which is only FHD but very pretty to look at none-the-less.

Max brightness of 400 nits puts it at the upper end of most laptops we’ve tested, and contrast and colour reproduction have impressed too. The only real downside is the glossy finish, which means that even with that brightness it can still be a slight struggle to use outside or in other bright, glare-filled conditions.

It’s what’s above the screen that matters more though: the webcam is held within a notch that protrudes from the centre of the top bezel – an inverse of what you’re probably used to seeing cutting into the displays of most modern phones. It’s small enough to still fit within the design and actually works very well thanks to the gently curved edge – it also provides a little lip that you can use to open the lid too, which is more useful than you may imagine in a time of extremely slim design and small form factors.

There are a couple of little design details that make the S13 feel very tailored and premium. the diagonally brushed aluminium on the keyboard deck and the cut line above the function keys make it stand out just that little bit more from the vast array of laptops on the market these days, though I’ll admit that the silver finish on the lid is a little too shiny and garish for my tastes – your mileage may vary.

Like most of the modern Asus laptop line it also boasts the company’s ErgoLift hinge – a slightly odd-looking design that I nonetheless love, as it gently lifts the keyboard up to a comfortable typing angle while clearing space below the body, improving both cooling and audio performance.

The keyboard is comfortable and responsive, with a surprisingly deep travel, and it sits somewhere in the middle of the clicky-mushy spectrum. The wide trackpad is a little more of a let down though – it works well, but there’s a slight drag to the finish, a friction every time you slide your finger across. There’s also a fingerprint sensor built into the top-right corner – this is quick and reliable, but we would prefer it built into the power button or elsewhere on the body, rather than taking up trackpad space.

There’s not even any real compromise on ports to achieve that, in part thanks to a tapered design. That means that the thick end of the wedge includes two USB-C ports (one of which is used for charging) along with MicroSD, USB-A, and a 3.5mm audio jack. If that’s not quite enough for you, Asus throws in a USB-C dongle that adds in an extra USB-A port and HDMI, though sadly there’s no ethernet included.

Something this small and pretty surely can’t have impressive specs under the hood too, right?

Asus have made sure the ZenBook S13 is well equipped with an Intel Core i7-8565U processor, backed up by a discrete Nvidia GeForce MX150 graphics card – a rarity in this sort of form factor. It won’t be enough to compete with a proper gaming PC, but it will make the S13 perfectly capable of basic gaming and creative tasks – I used it for audio, photo, and video editing on the road with no complaints.

The processor and graphics are supported by a 512GB SSD and either 8GB or 16GB of RAM – as I mentioned earlier, you get 8GB in the US and 16GB in the UK. Other markets may have versions of the laptop with different specs though, so double-check before you buy.

In terms of actual use, that converts to seriously solid benchmarking performance (using our 16GB RAM model). Geekbench’s CPU test and PCMark’s multitasking test both put the S13 up with just about every comparable ultrabook, while on the 3D Mark graphics test it and the MateBook X Pro leave everything else in the dust, and the ZenBook even keeps up with the X Pro, despite that laptop boasting the more powerful MX250 GPU. As a reminder though, at comparable specs this is cheaper than all of these rivals except the ZenBook 14.

Despite all that internal oomph, battery power is solid too – the S13 delivered just under 13 hours of continuous video in our battery test, in line with last year’s ZenBook and ahead of the XPS 13. Once again the MateBook X Pro just edged it, but that’s a much bigger and pricier device.

Asus has been making dependable laptops for years without earning the hype of Dell or Apple’s latest, but the ZenBook S13 is a sign that this is an under-appreciated company operating at the top of its game.

Right now you cannot find an ultrabook that crams specs like this into a body this small, and the S13 does it all while under-cutting most of the market on price. That’s not even mentioning the reverse notch – what could have been a design gimmick but in fact keeps the bezels slim while providing an unexpectedly handy lip for opening the laptop.

The silver finish might be a bit bling and the trackpad isn’t the best, but those are minor complaints in the grand scheme of things. If you can afford to drop a grand and a half and want discrete graphics in an ultra-portable package, the S13 is a very easy recommendation.