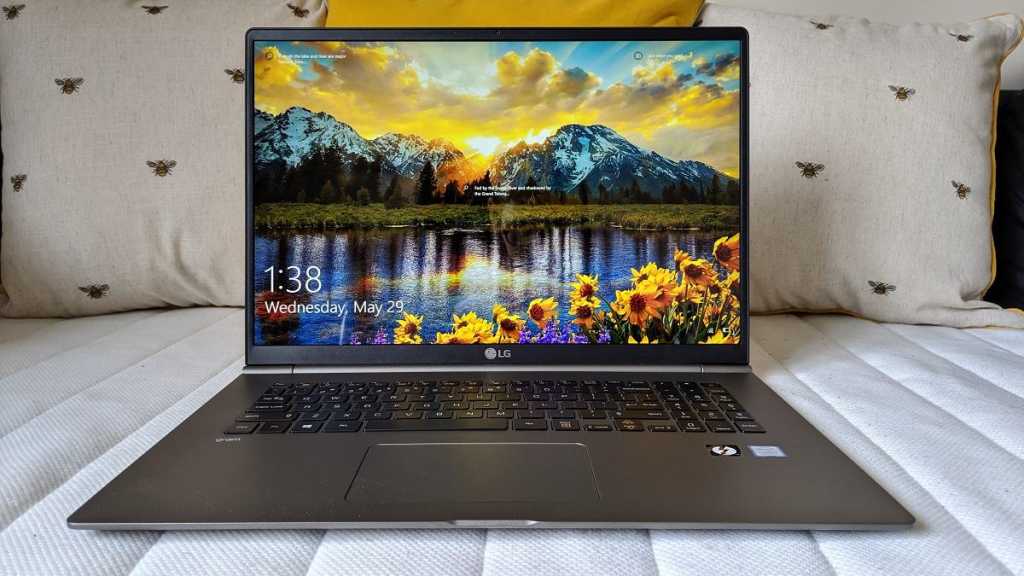 The LG gram 17 is an excellent laptop, partly because it offers something you can’t really find elsewhere.  This is a huge laptop that you can actually take around with you, and also has great battery life. There’s more to like including decent performance and a nice range of ports.

There was a time when a 17in laptop was a ‘desktop replacement’ device, but that’s history with the LG gram 17. A great laptop for those wanting loads of real estate in a chassis you can actually take around with you, as you’ll discover in our full review.

These days a 17in laptop is going to be of the gaming variety, focused on power and not portability. LG has proved here that a large laptop like this doesn’t have to be thick and heavy. In fact, it’s lighter than many laptops with a smaller screen. It’s also no slough when it comes to performance and there are good features on offer here.

Note that you can now check out our LG gram 17 (2020) review, which replaces this model.

In the UK, the laptop was available from  Ultrabooks.com ahead of the official launch. However, you can now get it for a much more reasonable £1,549 from Currys PC World.

Unlike most laptops, the gram 17 comes in just one model. While that means no choice of the spec that suits your needs or budget, is does make choosing, well, not even something to worry about.

It’s not bad at all for a an Intel Core i7 with 16GB of RAM and a huge screen. Check out our round-up of the best laptops.

If the LG gram 17 was a boxer, it would be a featherweight – and that’s despite it’s size being inappropriate for the category. At just 1.34kg (2.95lbs for those of you in the US), the laptop is the lightest on the market at 17in.

We’d be impressed with this figure for a smaller laptop, around 13- or 14in, let alone 17in. In fact, the LG is almost identical in weight as the Huawei MateBook X Pro.

That’s seriously impressive and it’s actually quite bizarre picking the gram up at first. Your wrist and arm is prepared for a certain level of effort based on the size of it, and it’s just not needed.

LG has managed this by using a nano-carbon magnesium alloy, which has passed no less than seven US Military durability tests.

Like previous models we’ve reviewed, it doesn’t feel like metal to the touch. Nor does it particularly look like it. Think more along the lines of plastic with a nice spray paint coating. However, the laptop doesn’t feel cheap and is quite sturdy. The display is still quite bendy, but the base much more rigid.

Thanks to fairly small bezels around the screen, the gram 17 isn’t the traditional size of a 17in laptop. This is a trend in other laptop sizes so it’s good to see it here on a larger model, too. We’ve managed to get it in some laptop bags designed for 15in laptops, but only just so check the dimensions if you already have a bag you want to put it in.

Despite the small bezel, LG has managed to put a webcam above the screen where is should live, rather than below or in a pop-up keyboard key like some rivals.

There’s plenty of room for a keyboard and trackpad here, along with space to rest your arms. The trackpad is a decent size and works smoothly. The backlit keyboard, although a pleasant typing experience – the keys have good travel and a crisp enough response – could be a little better.

It’s good to see a dedicated number pad here, but it’s a little squished on the end and a few keys are needlessly small. We’re mainly talking about the enter and arrow keys. We’re being a little picky here because there’s so much space available. On the plus side, there’s a dedicated function row at the top and the power button has a fingerprint scanner built-in.

The headline here is that this is a 17in laptop that’s thin (17mm) and, more importantly, lightweight.

The screen is arguably the main reason to buy the LG gram 17. After all, you can get plenty of equally powerful laptops for a lower price with a smaller display. This is going to appeal to anyone who even on a 14- or 15in laptop still doesn’t feel like they have the space to do things properly.

LG has gone with an IPS LCD display here and although it’s not 4K, the 2560 x 1600 resolution is decent resulting in a solid pixel density of 177ppi. It uses an unusual 16:10 aspect ratio, as opposed to 16:9 or something like 3:2 on the the Microsoft Surface Laptop 2. LG says this is better for things like editing photos and typing word documents.

We’re not totally convinced, especially when the main selling point here is the 17in size. More real estate is better than the aspect ratio if you ask us.

It’s also got a good 89% sRGB and Delta E average of 1.54. Add decent viewing angles, contrast and brightness (max 370cd/m2) and you’ve got a laptop display good for almost any task.

It’s worth bearing in mind that this isn’t a touchscreen like previous LG gram models.

As mentioned earlier, there’s only one model of the LG gram 17 so this keeps things nice and simple for this review anyway. Even if it means you can’t choose a cheaper option if money is limited.

We’d say that’s a pretty good line-up for the price, but will be frustrating if you want more storage, for example.

There’s no dedicated graphics card here so you’ll be relying on the built-in Intel UHD Graphics 620 on the processor. Still, performance is solid as we’ve come to expect from this i7, and the memory is double the capacity of most rivals.

As you can see in the table below, the LG gram 17 matches up to rivals with similar specs. The scores are marginally behind, we think, due to a slightly slower SSD here – SATA3 instead of PCIe. In the real-world, there’s no noticeable difference.

The MateBook X Pro and MacBook Pro both have dedicated graphics cards which explains why they’re out in the lead. With smooth performance for general tasks on Windows 10 Home, that’s the key point here. Do you need something with a proper GPU for more hefty workloads or gaming, if so the X Pro or MacBook Pro are good choices.

A plus point here, especially compared to many modern laptops, is the solid array of ports. It’s the same line-up as the gram 15 with 3x USB-A (all version 3.0), USB-C, an HDMI port, a microSD reader and a headphone jack. There’s also an Ethernet adapter in the box which uses USB-C.

You won’t need to take up that USB-C port – which supports Thunderbolt 3 – for charging either as the gram 17 has a traditional AC plug.

Things aren’t so positive on the audio side with two 1.5W speakers. They’re on the underside and end up very close to the surface underneath the laptop. On a desk this helps with volume somewhat but the overall sound profile is muddy and leaves a lot to be desired.

The battery life is a whopping 19.5 hours which is an impressive claim by LG. We took it with a pinch of salt when the laptop was first announced and that proved to be the right move.

Still, the gram 17 managed an impressive 16 hours in our usual battery test – that is looping a 720p video at a screen brightness of 120cd/m2 (50% in this case). That’s up there with some of the best results we’ve seen, especially from an Intel laptop. You can get more from a Qualcomm-powered device but the performance is way off.

The LG gram 17 is a great buy if it’s the kind of laptop you’re looking for.

That is, one with a huge and high quality screen inside a chassis that’s extremely light. Add in excellent battery life too and you’ve got a great candidate for a portable computer with lots of real estate.

Core specs and performance are pretty decent as are the range of ports and little extras like the fingerprint scanner. Our main complaint is the poor audio and slower hard drive. Still, it’s easily one of the best 17in laptops you can buy.