The Osmo Pocket won’t appeal to everyone and it isn’t an action camera to rival a GoPro: it isn’t rugged or waterproof. But it does have a 3-axis gimbal which does an excellent job of delivering super-smooth video.

DJI is well known for its drones, but you might not know it has a pretty big range of handheld gimbals in its Osmo range. The Osmo 2 Mobile is a £129 / $139 gimbal for your phone, and is certainly one of the best choices out there.

But if that’s too big and bulky for you, DJI has a new option: the Osmo Pocket. It’s a tiny 4-inch tall device with a three-axis gimbal and a camera that can shoot 4K video at 60fps.

Is it trying to complete with the GoPro Hero 7? Not really: this isn’t so much an action camera as a tool for video enthusiasts and people making videos for YouTube.

Since it includes a 4K camera, it’s a lot more expensive than the Osmo Mobile 2. You can buy an Osmo Pocket for £329 / US$349 from DJI and other retailers including Heliguy in the UK.

There’s really nothing else out there like the Osmo Pocket. It’s the device we imagined DJI would launch at some point, only it’s a real shame that unlike GoPro’s Karma Grip, the gimbal and camera aren’t modular.

In other words, you can’t simply remove the camera from your Mavic 2 or another DJI drone and attach it to the Osmo Pocket. So you’re effectively paying for another gimbal and camera even if you already own a Mavic. 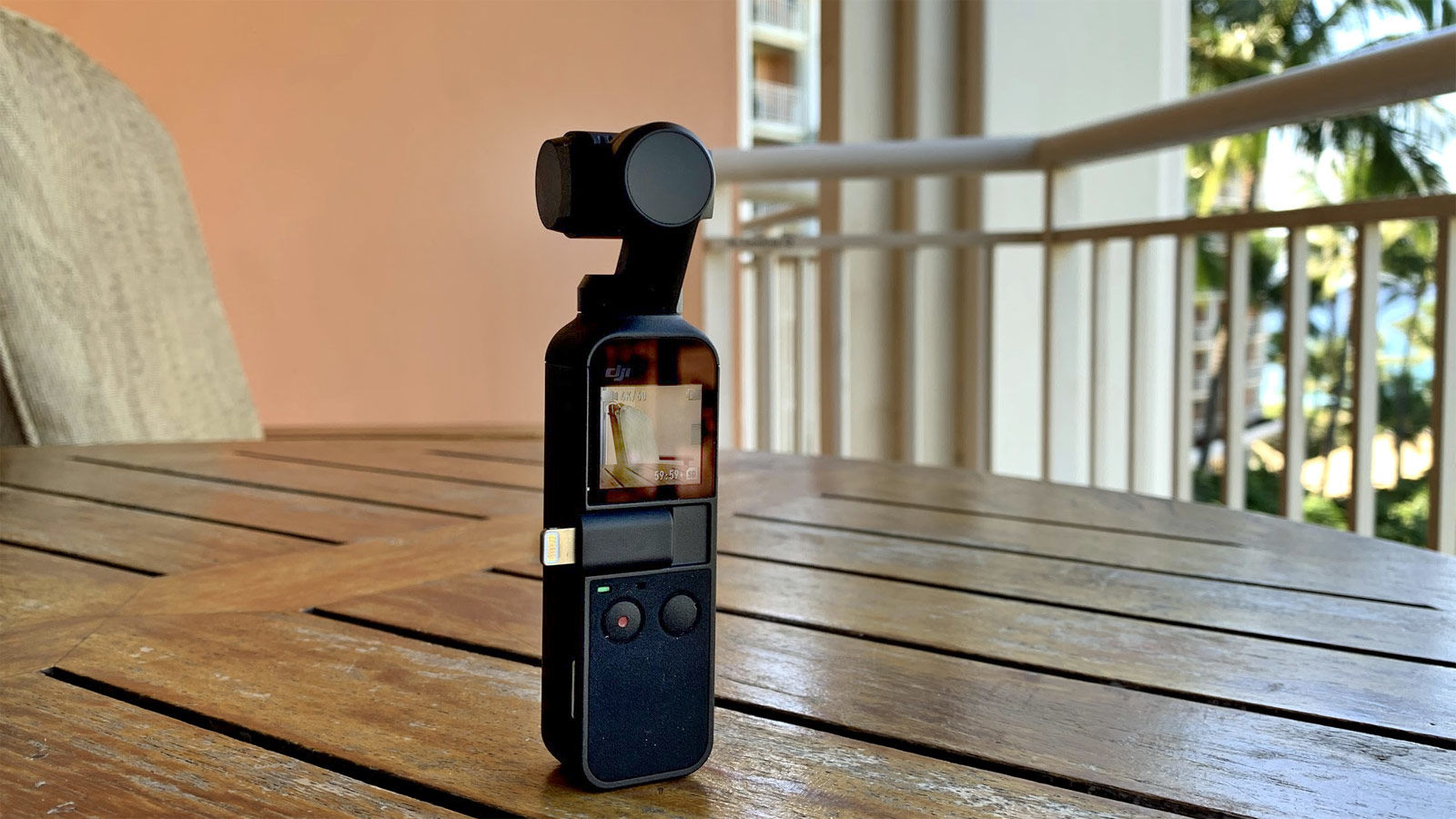 During our testing, plenty of people asked what the Osmo Pocket was and struggled to see who would buy it. After all, many people have a decent 4K video camera in their pocket on their phone, and if they really want smoother video they can buy the Osmo Mobile 2.

Plus, it isn’t waterproof or rugged like a GoPro, so the Osmo Pocket is undoubtedly a niche device.

But if you’re still interested, it does a fantastic job.

In the box you get the gadget itself, a smartly designed carry case and adapters so it can connect to an iPhone or USB-C Android phone. This isn’t a cable: the plug sticks out the side and connects directly to your phone, making the Osmo Pocket a lot like the  DxO One. 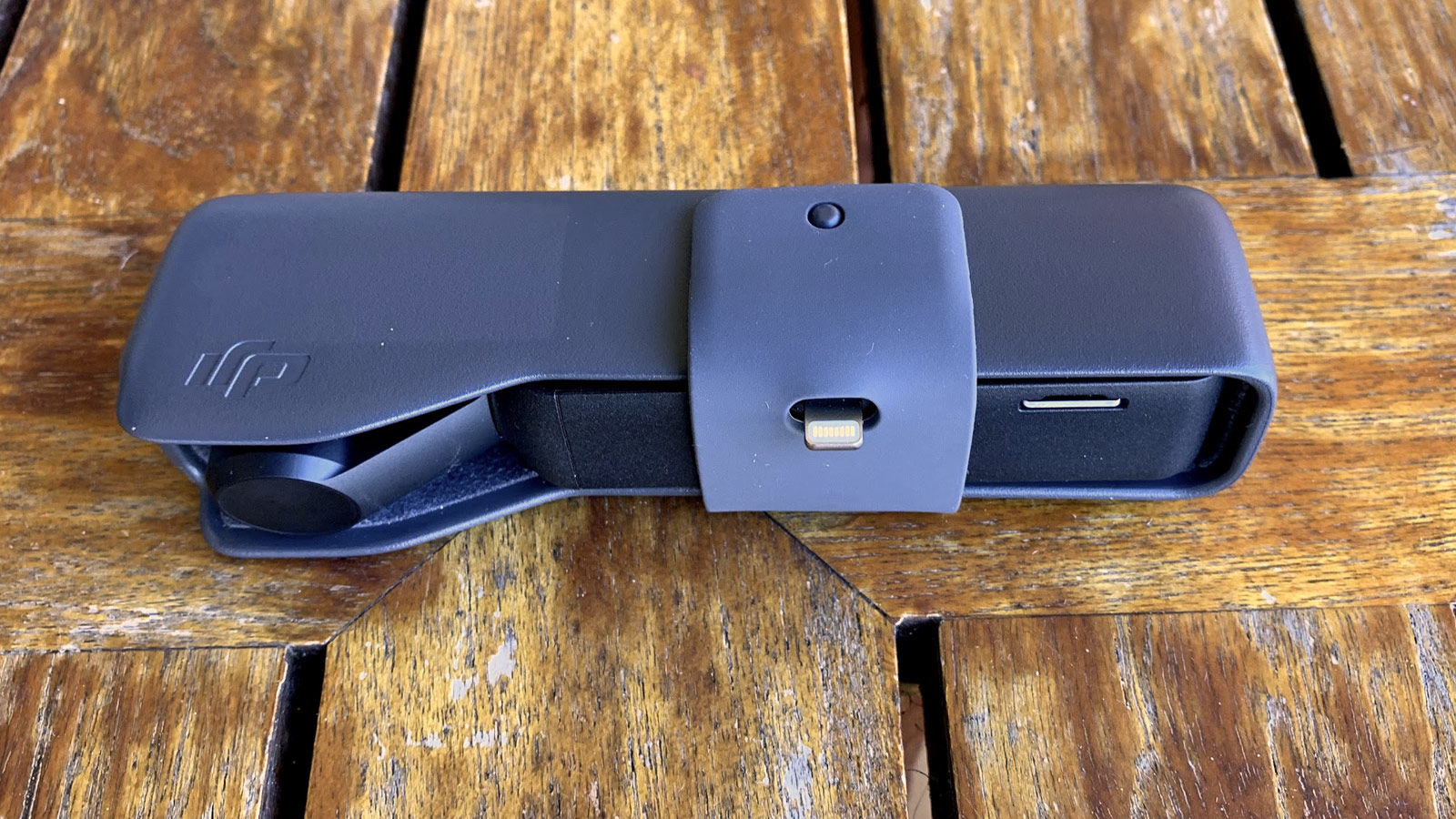 The big difference is that the Osmo Pocket works perfectly well as a standalone device, with the one-inch square touchscreen showing a preview as well as allowing you to change modes and adjust many of the settings. 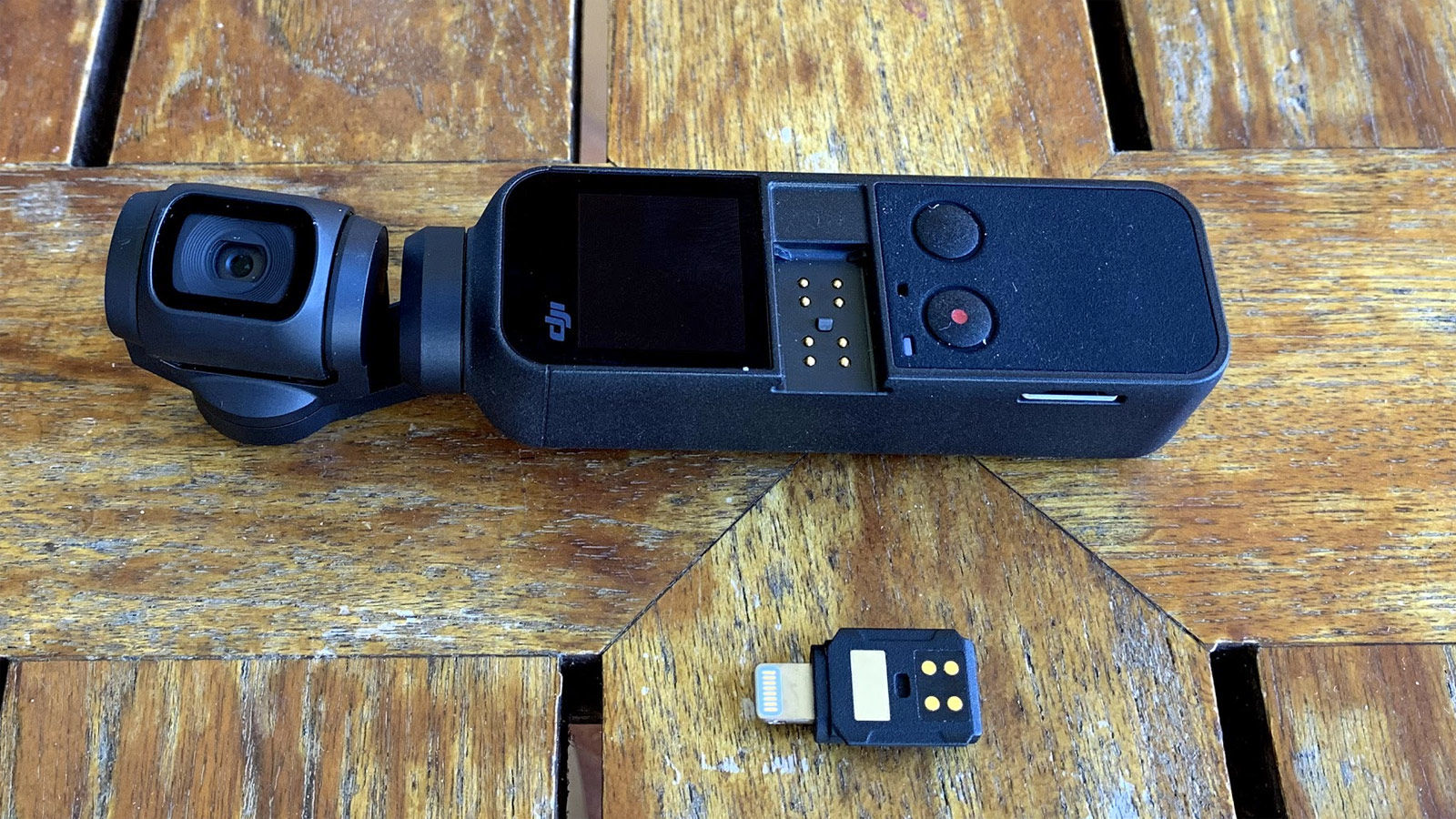 As well as video, it will take 12Mp photos, 180-degree panoramas, 3×3 panoramas, time-lapse and motion-lapse video.

You get basic (and slightly awkward) tilt control over the gimbal by using a slider on the touchscreen, but you can choose the gimbal mode including both slow- and fast follow, tilt lock and FPV mode. Also, there’s no joystick for precise and easy control over motion.

The square screen makes it a little tricky to frame your image as the preview is cropped to fill the screen, and that’s where the phone and the companion Mimo app comes into play. 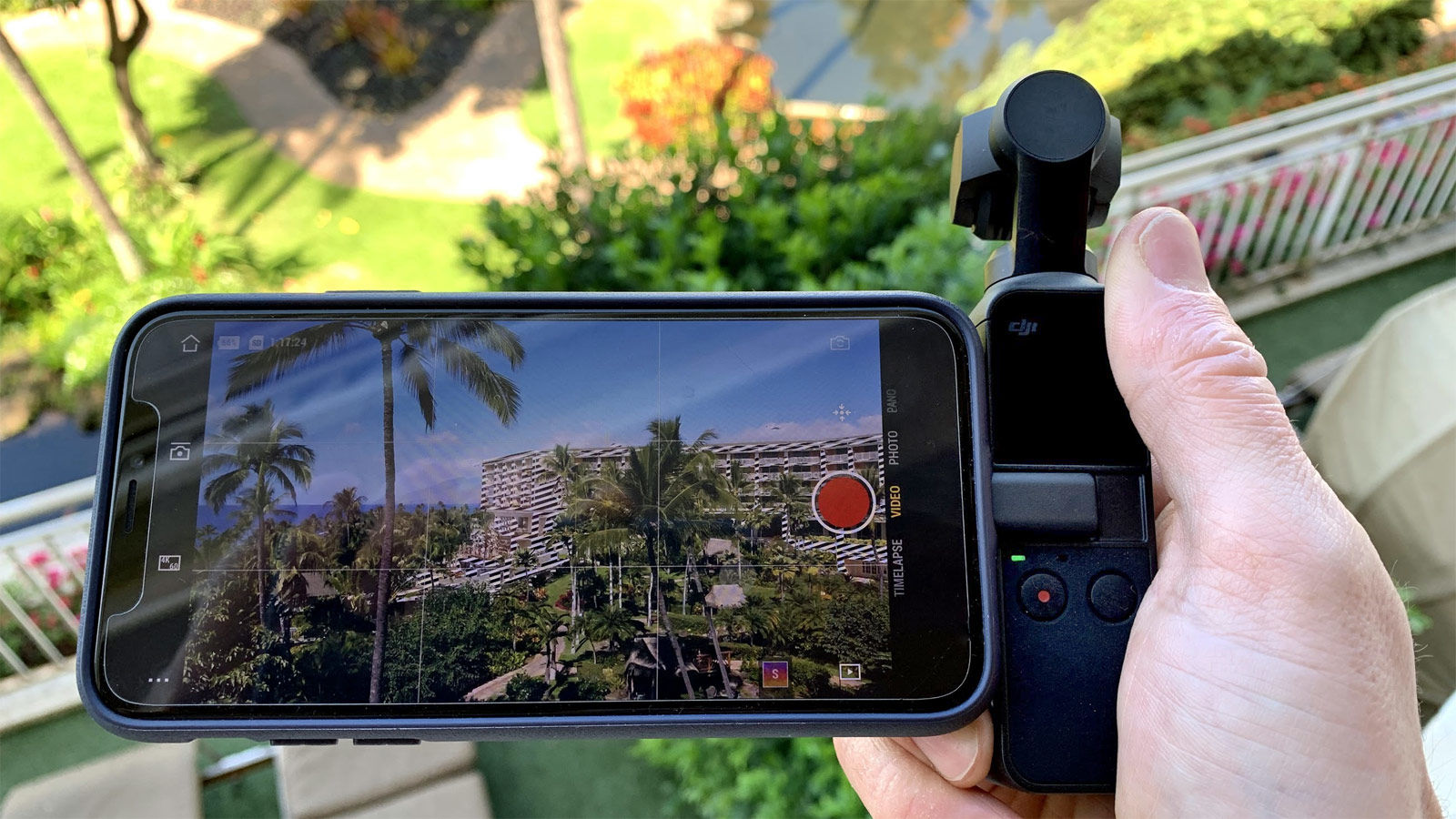 It uses your phone screen as the preview, but also gives you access to a few more settings including ActiveTrack and FaceTrack. As with ActiveTrack on a drone, you simply draw a rectangle around the subject and the camera will keep it in the centre of the frame.

With FaceTrack, you tap the function button three times and the camera will turn 180 degrees and will keep your face in the middle of the image. That’s useful for vlogging.

The Mimo app is brand new, but has a similiar look and feel to the DJI Go 4 app. You can use it to change the camera settings, access the Pro mode and set up motion timelapse shots (though you can still do all bar Pro mode using the tiny screen on the Pocket itself).

The second grumble about design is that there’s no tripod mount. This would be desirable so you don’t have to hand-hold the Pocket when recording time-lapses. The flat bottom means you can place it on a flat surface and it will remain upright, but you’re not going to find many of those outdoors in the right location.

DJI does offer an action camera mount (£23 / $29) which makes the Pocket compatible with GoPro mounts, but a simple tripod mount would have been good.

Talking of accessories, Wi-Fi and Bluetooth aren’t built-in, so if you want a wireless connection to your phone you’ll have to buy the add-on for £53 / $59.

There’s also a gimbal control wheel add-on which costs the same. So if you need these, the Osmo Pocket actually costs more than the Hero 7.

You’ll have to budget for a microSD card as well, since no storage is included.

For its size, the Osmo Pocket performs well. As you can see from the sample footage at the top of this review, it’s able to capture impressively smooth video but – like any handheld gimbal – has its limitations.

For example, when walking or running, you’ll see the tell-tale up and down motion that even a three-axis gimbal cannot prevent happening. You can adjust how you hold the Osmo Pocket to minimise this, but it’s almost impossible to eliminate it entirely.

On occasion there are focus hunting problems, where the camera obviously refocuses and renders the clip – or that specific part of the clip – unusable. It doesn’t do this all the time, and you should be careful to monitor for this by using your phone as a viewfinder since the issue isn’t noticeable on the Pocket’s tiny screen.

One fun feature in the Mimo app is story mode. This is a bit like the trailers you can produce in iMovie on an iPhone: the template is set up for you, so you simply point and shoot clips that are automatically edited into a finished video for you. The main difference here is that moves are pre-programmed so the gimbal moves the camera appropriately while you hold the handle still.

Here’s a brief example of what you get, complete with pre-set music and blown-out video effects (and DJI watermark):

It’s possible to edit video within the Mimo app, but not if you choose to shoot at 4K60 on an iPhone. (You can on Android, though.) DJI says it’s working on this and hopes to update the app soon.

Another problem was that panoramas weren’t stitched seamlessly 100% of the time, with obvious joins where the horizon didn’t line up, or skies weren’t blended well enough to account for exposure differences. Hopefully this is just another bug that will be ironed out before long.

Note that panoramas are created within the Mimo app, so all you’ll find on the microSD card are the separate, unstitched photos, so you have to use the app to download them to your phone.

The panorama mode worked perfectly most of the time; here are a couple of examples of the two different panorama types on offer, 1×3 and 3×3: 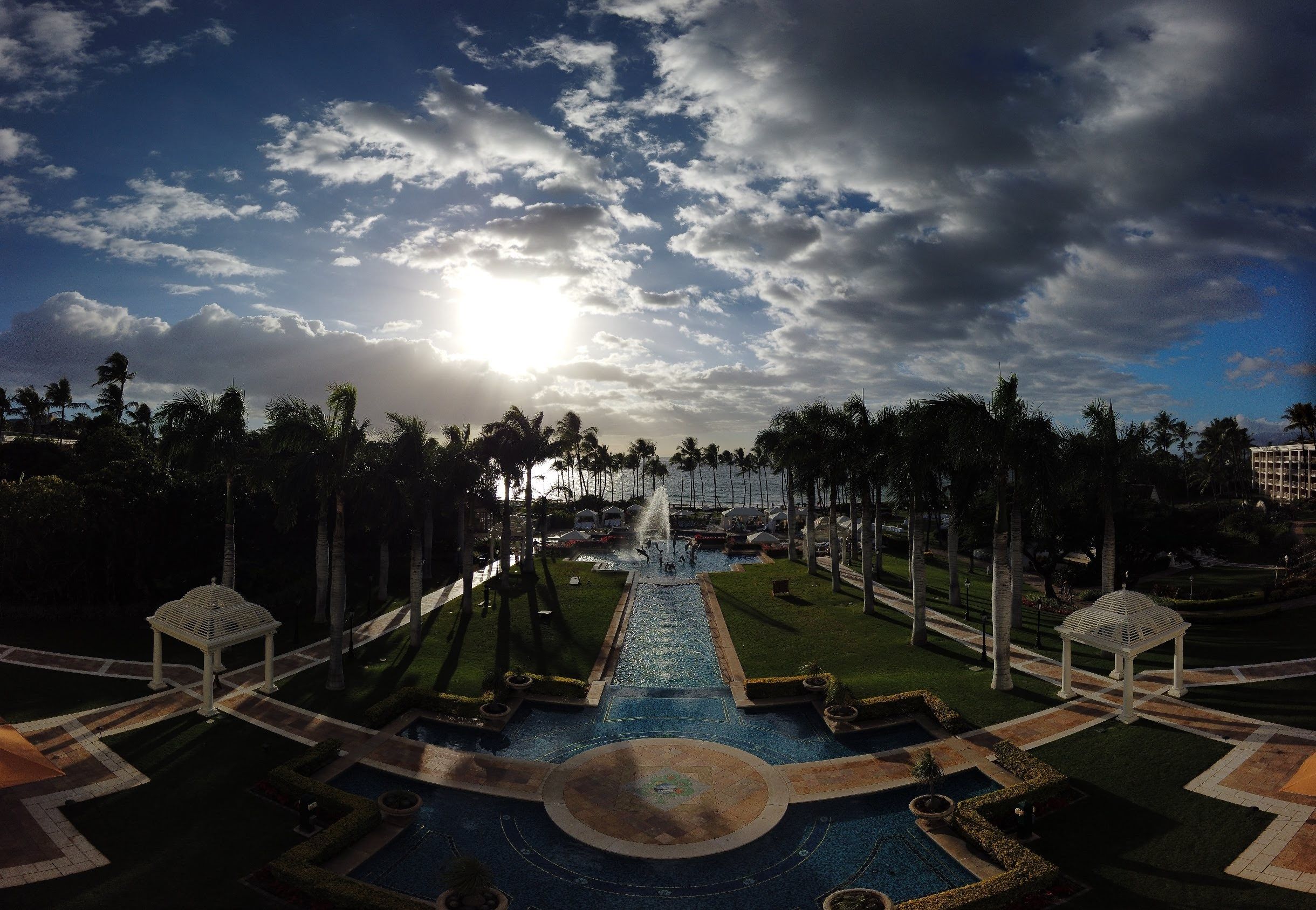 Overall, though, we were very happy with video and photo quality considering both the diminutive dimensions and price of the Osmo.

The Osmo Pocket is a curious device, and certainly a niche one. It doesn’t have its sights aimed squarely at GoPro and although it’s cheaper than the Hero 7 Black at first glance, the cost mounts quickly if you need accessories such as the action camera mount and the Wi-Fi / Bluetooth module.

But if you’re an amateur filmmaker who makes home videos or you run a YouTube channel, then the Osmo Pocket is a fantastic little tool.