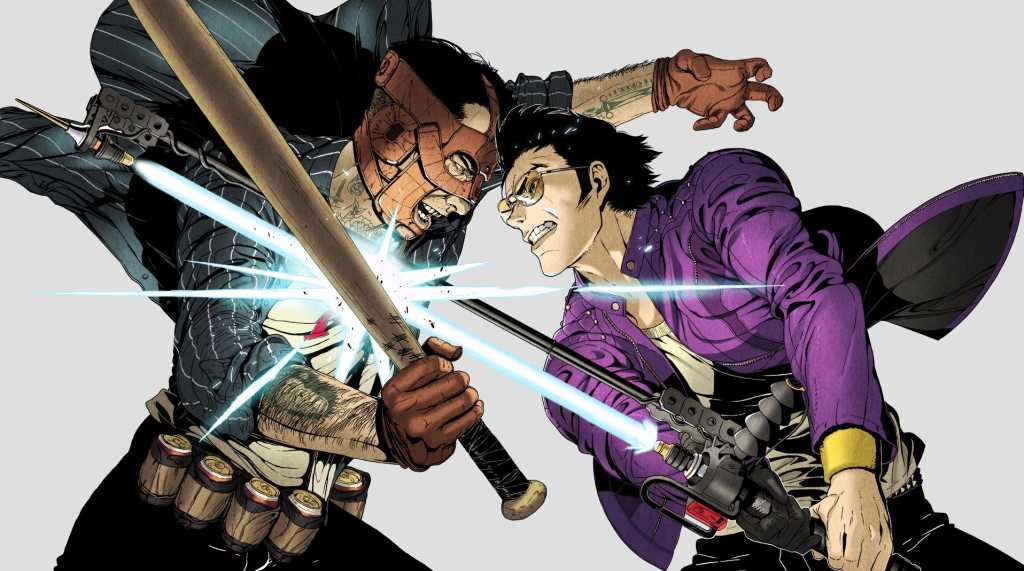 Travis Strikes Again: No More Heroes is shaping up to be Suda51 at his unpredictable best. Self-referential, surreal, and oozing with style, this could set the Switch off to a great start in 2019.

Travis Strikes Again: No More Heroes isn’t No More Heroes 3, and that’s intentional. The series’ revival on Switch, almost a decade after the Wii’s No More Heroes 2, is meant to be a fresh start: for creator Suda51, for studio Grasshopper Manufacture, and for players – both new and old.

Out exclusively on the Switch from 18 January 2019, the game once again follows assassin Travis Touchdown, but this time instead of working his way through an international league of fellow assassins, he’s fighting through a selection of other videogames, in a seriously meta homage to gaming’s supposed glory days.

Travis is drawn into the ‘Death Drive MK-II’, a demonic videogame console (natch) where he has to race through to defeat the bosses of six distinct game worlds before a rival assassin, Badman.

If that sounds absolutely bonkers, then don’t worry – so is the whole game, and all of Suda’s back catalogue to be honest. This is a game where you save by popping into a portaloo, heal by visiting a ramen stand, and are presented with sage aphorisms on topics ranging from the power of positive thinking to the sins of chain restaurants.

The gameplay itself is at least more traditional – well, mostly. Like the previous No More Heroes titles, this is predominantly a hack ‘n’ slash where you cut your way through hordes of enemy minions and bosses with the aid of Travis’s beam katana.

You’ve got a light attack and a heavy attack, with a dodge and jumping attacks to mix things up. Your beam katana runs out of power eventually, so you’ll have to keep a close eye on it, and shake the Joy-Con to recharge occasionally.

Holding the left trigger lets you use the face buttons to activate up to four special attacks on individual timers – we tried an AOE attack and a heavy knockback-and-stun hit, but it looks like there’ll be loads to collect across the game, letting you mix-and-match for your preferred combo.

It feels familiar for veterans of No More Heroes, or other Suda51 games like Killer Is Dead, and that’s intentional. Suda51 – whose real name is Goichi Suda – told us that while the studio is making a conscious effort to return to the basics after experiments like 2016’s free-to-play online deathmatch Let It Die.

The aim was to “take the studio back to the scale it had been in the early days, with a much smaller team of around 10-20 people,” a mix of both veterans and young staff members, with a focus on “making a lot of really tight action games like this.”

That isn’t to say there’s nothing experimental going on here. While the section I played through – the game’s first world – was mostly a familiar blend of hacking and slashing, interrupted only by a few environmental puzzles and a mid-boss, other worlds will play around with the format more.

“The games are going to have a really strong ‘80s, ‘90s feel to them, and even though the base is the hack ‘n’ slash style there’s going to be a lot of extra elements added to that basic formula,” Suda told us – including sections that drag Travis inside a puzzle game and a racing title.

“And there’s also going to be a lot of retro sentiment to the game,” he continued. “So it might seem hard to play or repetitive in places to younger gamers who aren’t used to that.”

Easy it certainly isn’t. I scraped my way through plenty of fights, just barely reaching the toilet in time for a save (file that one under ‘sentences I didn’t expect to write this year’) on multiple occasions, and getting quite thoroughly pummelled by the first boss when I finally reached him. And that’s just World 1 – expect things to ramp up from there.

Like Suda51’s best games, No More Heroes feels like it will reward patient players, and mastering the various special attacks – and the enemy types they’re each best suited for – feels like it might be the real heart of the game. There’s a counterpoint to that depth though, and it’s part of why Suda says that “It’s because of the Switch that this game exists”: co-op.

I didn’t get the chance to try it, but Travis Strikes Again features drop-in couch co-op in which a second player takes control of Badman. Suda was clear that he wanted co-op from the beginning, with a very specific constraint: that each player be able to play with just one Joy-Con.

Openly admitting that the Joy-Con “doesn’t have enough buttons,” Suda explained that the team completely remapped the control scheme at least five times across development to find a set-up that could work equally well with one Joy-Con or two.

Playing solo with two Joy-Cons in the grip controller the experience doesn’t feel compromised at all, and it’ll be interesting to find out how it plays with the stripped back setup – and what wrinkles adding a second player into the mix produces.

If nothing else, allowing a second player is a welcome acknowledgement that like Suda51’s best work, Travis Strikes Again is probably an experience best shared with others.

Surreal humour, incessant references, and strange non sequiturs about Japanese food culture run right through the heart of the game like – in his own words – “the ramblings of an old man,” and you’re gonna want someone else with you to confirm that yup, that really did happen, and no, I don’t know what the hell it means either.