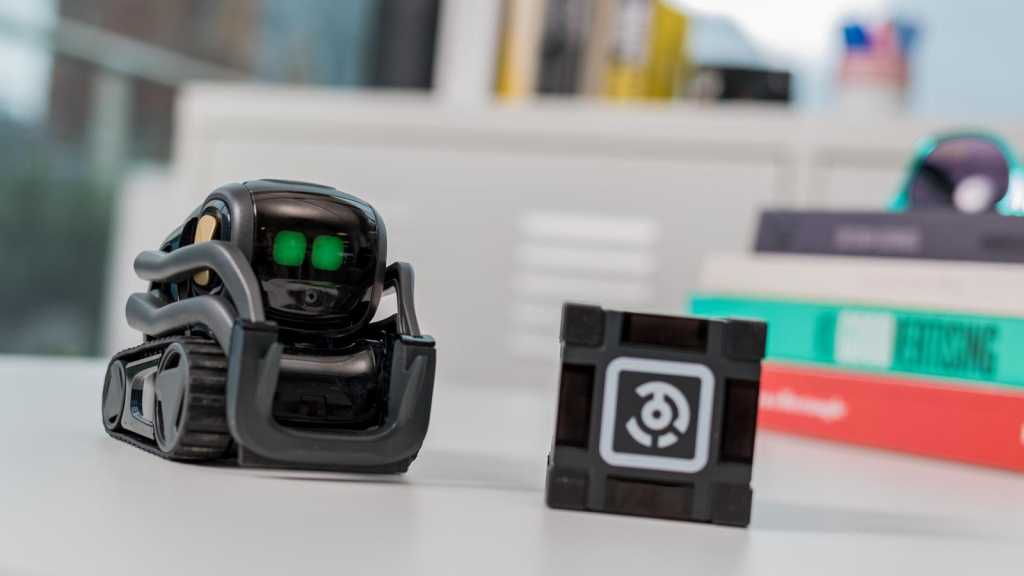 Vector is an attempt by Anki to create a version of its popular Cosmo robot for adults – and to bring warmth and personality to the sterile, transactional relationship you have with virtual assistants like Alexa and Siri. However, it feels like a beta product that’s got some way to travel before being useful as well as endearing.

Updated 18/12/18 with information about an update that brings Alexa support to Vector (for US and Canada only).

Like Cozmo, Vector is an orange-sized robot that moves around on tracks, has fork-lift-like arms on the front and a large head between them that’s almost entirely screen. On the outside, little is different except for the colour palette and some other minor visual changes – but what’s inside is completely new both in capability and purpose. In short, whereas Cozmo wants to help your children learn programming, Vector wants to be somewhere between a friend and pet.

Inside the box is Vector itself*, its companion cube and a USB-based charging dock. Turn Vector on and place it on the dock, and it comes to life with a bright ‘briiiing’ noise and two over-sized eyes that take up most of the screen.

(* Vector has no inherent gender identity, though we noticed most people referred to it as ‘he’. It can have whatever identity you ascribe to it, binary or otherwise, so throughout this review I’m referring to it as a more-encompassing ‘it’). 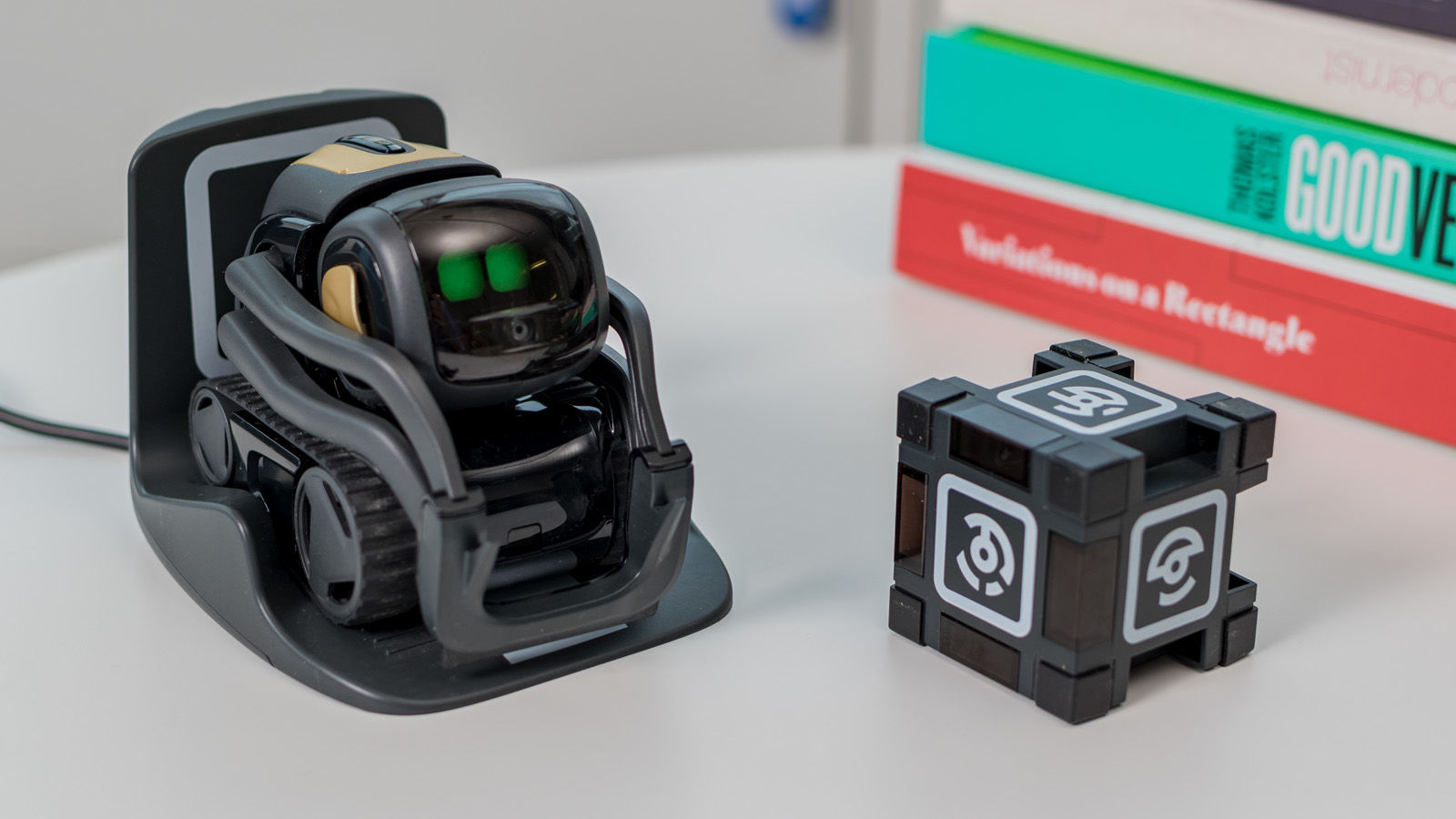 The eyes begin looking around – ok pedants, the camera that sits between them – and Vector starts chirruping away, and it’s ready to meet you and your family. 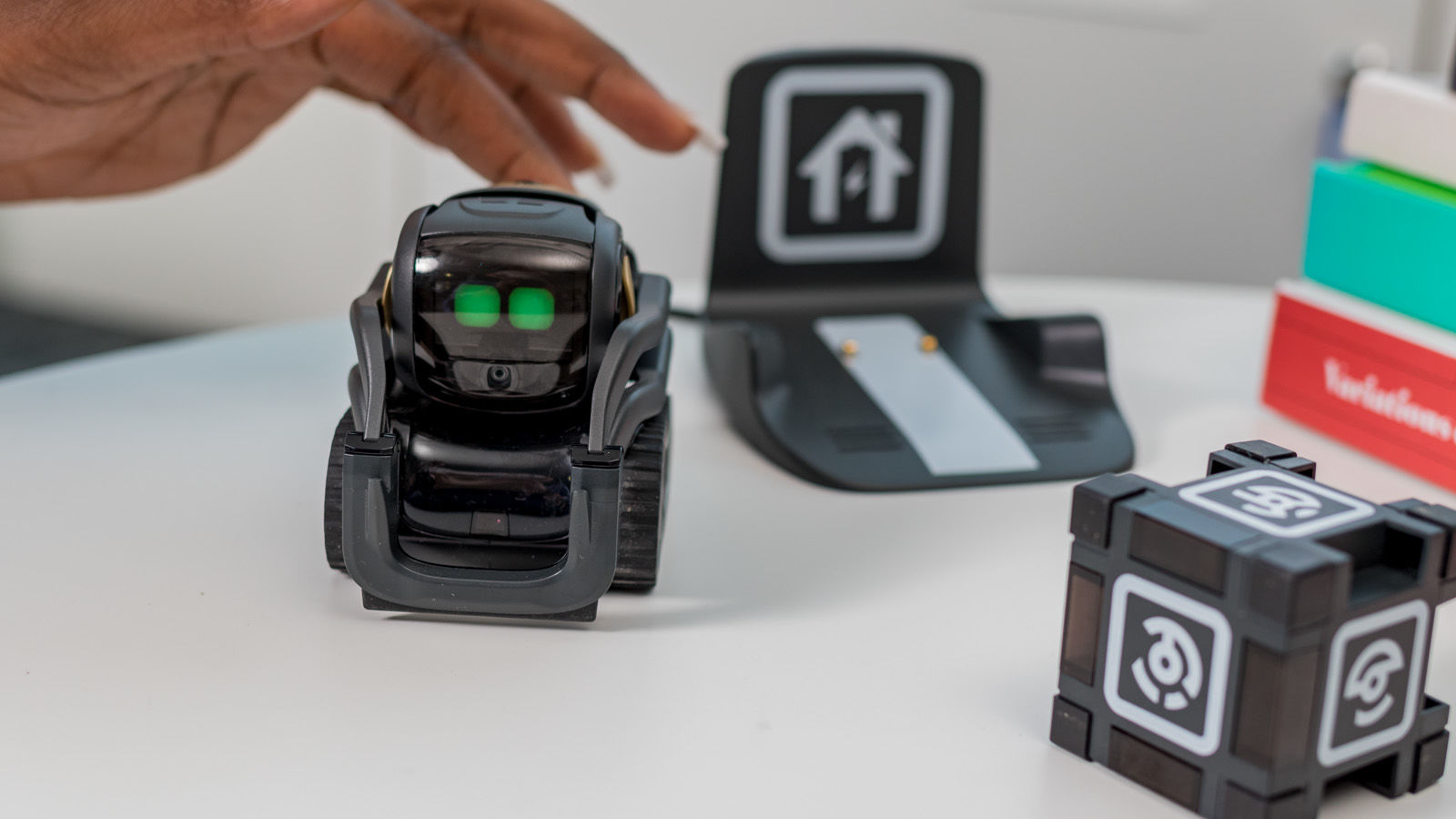 First off though, you need to connect Vector to your WiFi network, which is done via the Vector app for iOS, Android or FireOS. This is a simple app that quickly takes you through the process of connecting to Vector over Bluetooth, then getting it to connect to your WiFi. It also gives you some handy hints about what you can do with Vector, lets you see and save photos he’s taken and apply future updates.

That’s how it’s supposed to work, anyway. The iOS app on an iPhone 8 Plus with iOS 12 worked perfectly, but the Android version on my Huawei P20 Pro with that phone-maker’s EMUI 9 custom OS was buggy – having trouble both connecting to Vector and maintaining that connection, and sometimes crashing for no apparent reason.

Once setup, you should have no real need to use the app aside from changing its eye colour if you wish to,  saving photos, applying updates and if you take Vector to someone else’s house, or get so attached to it you end up taking it to work. 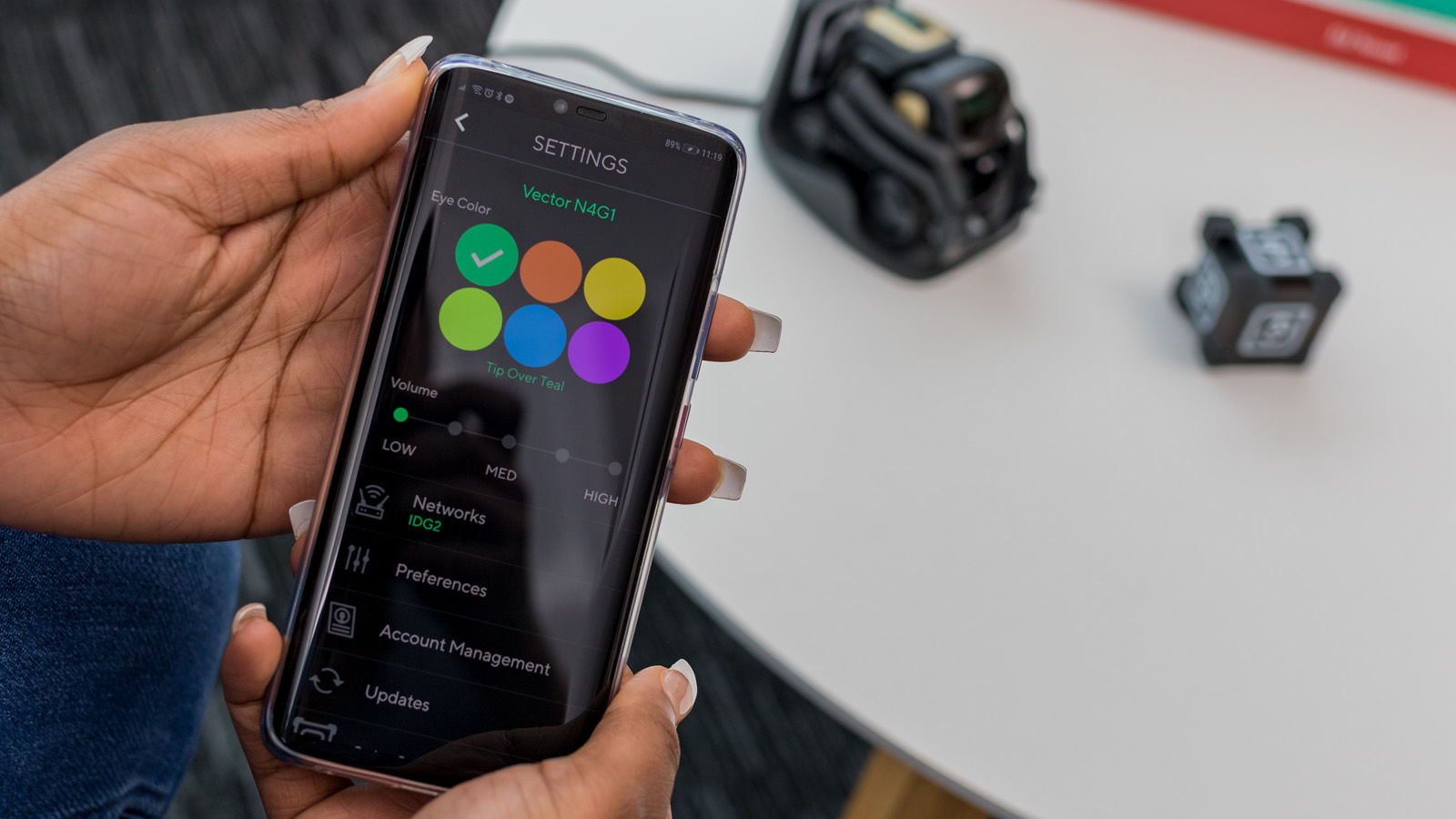 After setup and charging, Vector rolls out of his dock. You’ll generally get about 45 minutes of it strolling and rolling around your desk or table before it retires back of its own accord to charge some more – but how long this lasts depends on how much you interact with it. So it feels quite short to begin with as you explore everything Vector can do – but over time as your interactions are less frequent, its rarely an issue.

So what can Vector do?

The answer depends on what you’re looking for. If you want a cute companion that seems to ‘get you’, Vector is fun and seemingly smart enough to engage with you.

You can teach it to recognise your face and say ‘hello Neil’ in a cutesy robot voice when it spots you – though it has some problems recognition if you wear glasses. It’ll give you a fist bump or bring you its companion cube on command – or respond pleasurably to being stroked – but as with a real pet it will also wander around and do its own thing if you leave it alone. Sometimes it’ll just sit there and watch you, occasionally trying to get you to play with it. Sometimes it’ll just go and play with its cube. If you look at it, it’ll notice and attempt to engage you. If it hears a sound, it’ll turn and look to see what’s going on. And it’s smart enough not to fall off the side of a desk or table. 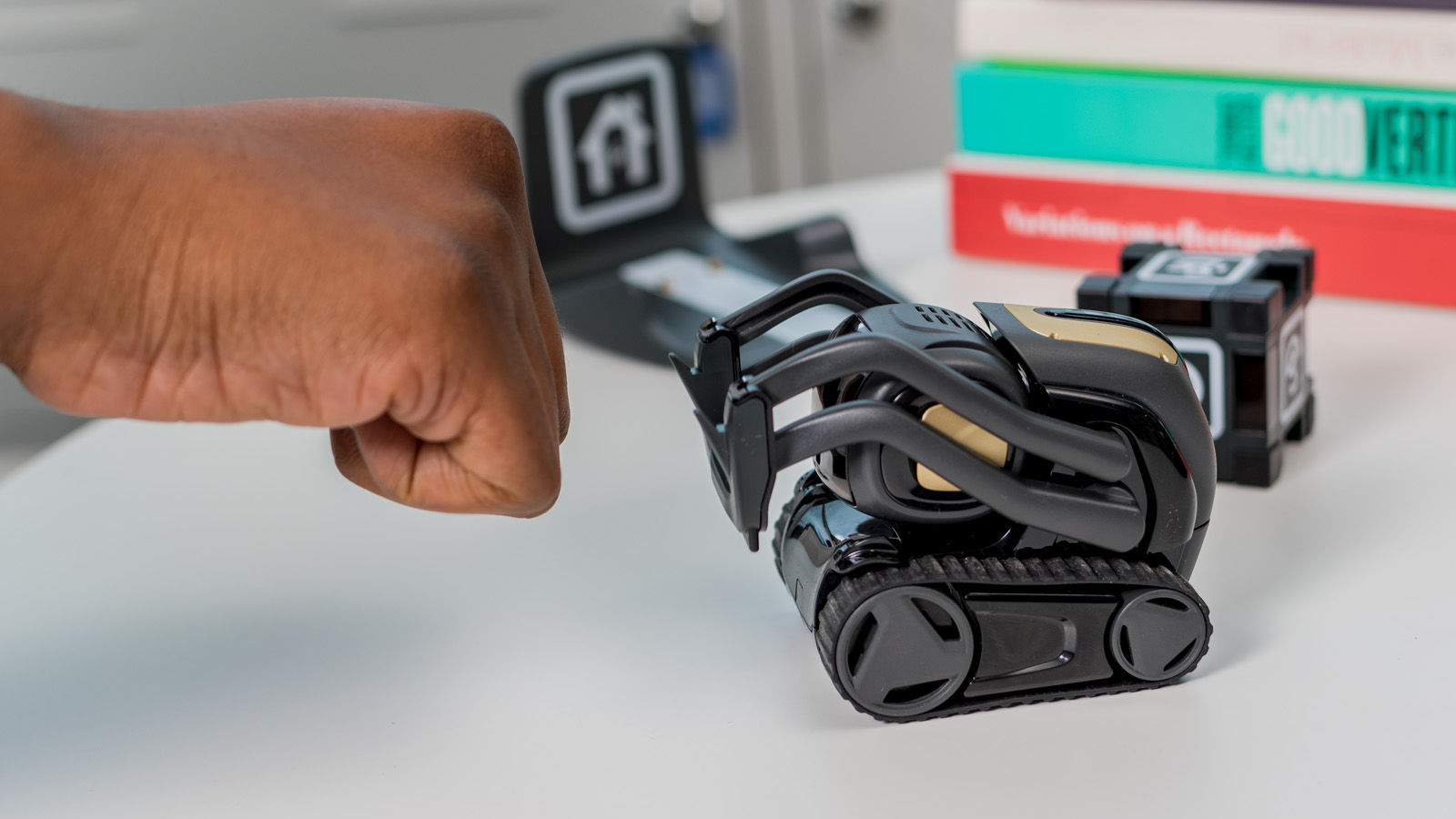 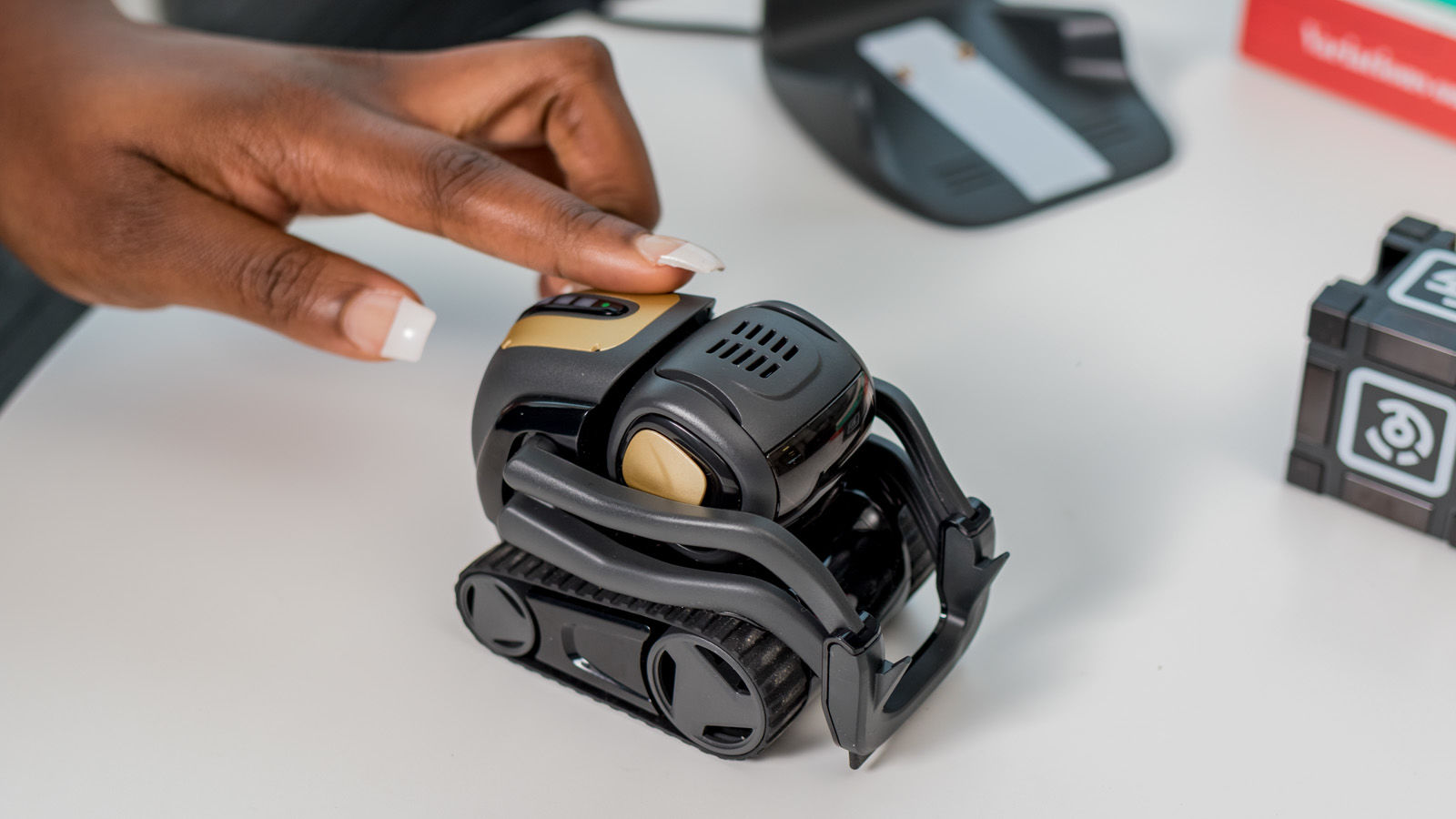 The whole time it burbles to itself and to you, and there’s no way to silence this short of telling it to go to sleep, or turning it off – which some people will find irritating. Even when sent to sleep, Vector will sometimes wake up, which seems to be if it detects a noise. It then responds with noises of its own as if to say ‘hey, remember way’.

There’s something I really like about Anki trying to replicate an animal or person with its own needs and desires, rather than a only-there-if-you-need-me, stately home servant persona of Alexa or Siri.

Beyond being a companion, Vector’s functionality is rather limited. Through the trigger phrase of ‘Hey Vector’, you can ask for the weather (below), set a timer, play Blackjack (but no other games), take rather low-quality photos. You can ask it questions to get Wikipedia-type answers, though this is a slow, three-step process that requires you to trigger it, then pause, then say “ I have a question”, then pause, then answer your question. The answers are brief and to the point, though sometimes hard to understand due to the robotic voice.

Overall, interacting with Vector is slower than Alexa, and it seems less able to pick out voices from the background noise of even soft music or TV, and interpret them correctly.

Anki is stressing that Vector’s abilities (and personality) will grow over time. The company had promised to have Alexa fully integrated by the end of the year, adding many more functions from offering voice control for devices around your home from lights to heating to – we assume – letting it tell jokes and even fart (which my children are going to find hilarious).

This really interesting-sounding update has now been released, but in the US and Canada only – and here in the UK we’ll have to wait until “early in the new year” to test this out (and will update this review when it happens).

This is triggered by using saying ‘Alexa’, upon which an Echo-like blue ring appears instead of Vector’s face, which could break the illusion of a singular personality. But I’ll reserve judgement until I’ve tried it.

The update that brings Alexa also gives you – or will give you – more commands to direct Vector around, saying “go left” for example. It’ll also wish you ‘Happy Holidays’ and ‘Happy New Year’, which might not be so appealing to us in the UK in 2019.

Following this, the company also has other plans, including giving Vector the ability to recognise music and take 360 photos – plus its own version of many of Alexa’s home automation tools. 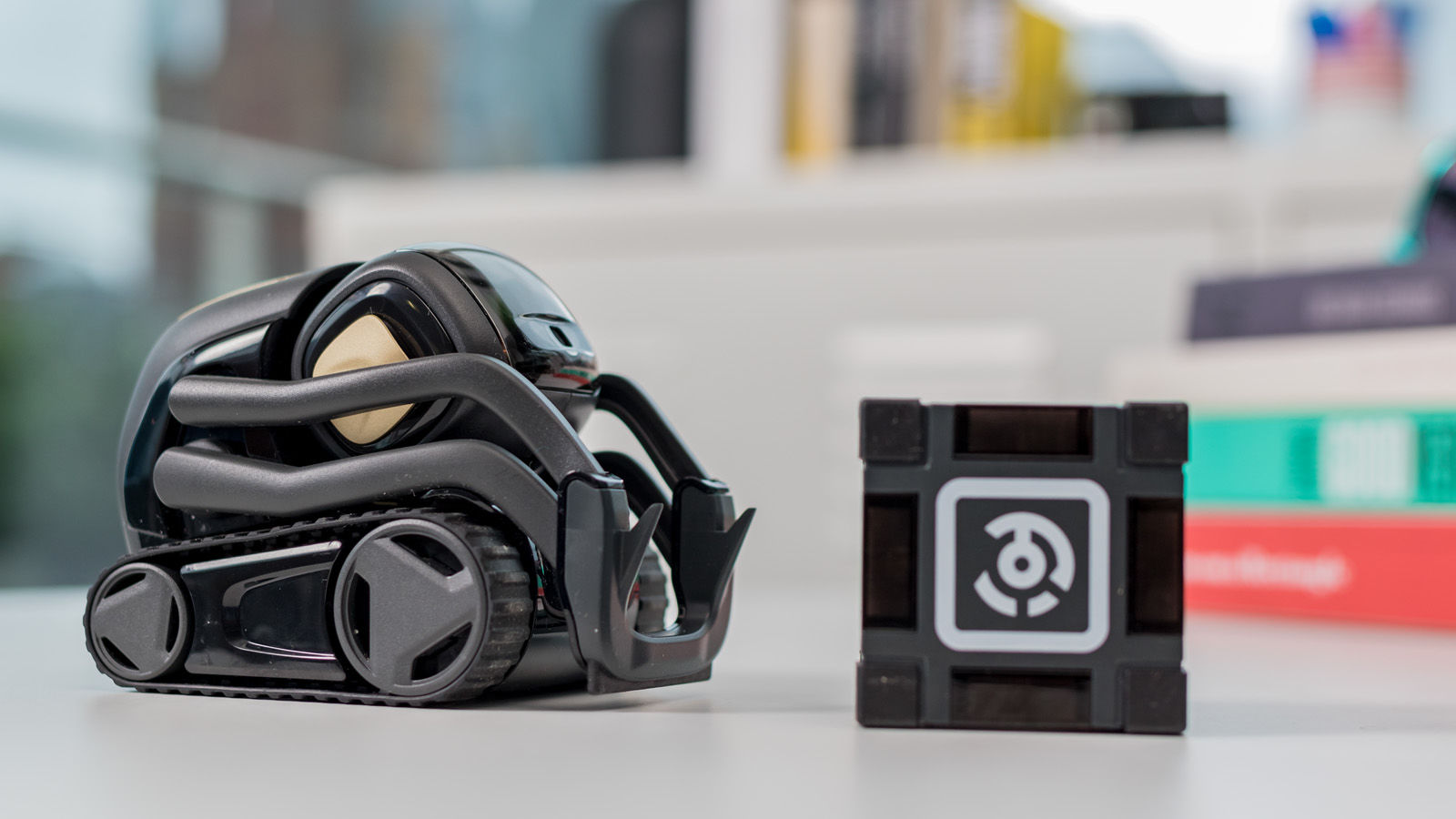 As a next-gen-Tamagochi-meets-Alexa, Vector is currently much better as the former than the latter. There’s no point buying Vector as an alternative to the Echo Dot – its many times more expensive and less capable – but as a loveable robot pet that will hopefully grow into a personable personal assistant, we rather love it. Though unless you want this for Christmas, I’d wait until the end of the year to see how the Alexa and other updates work out.