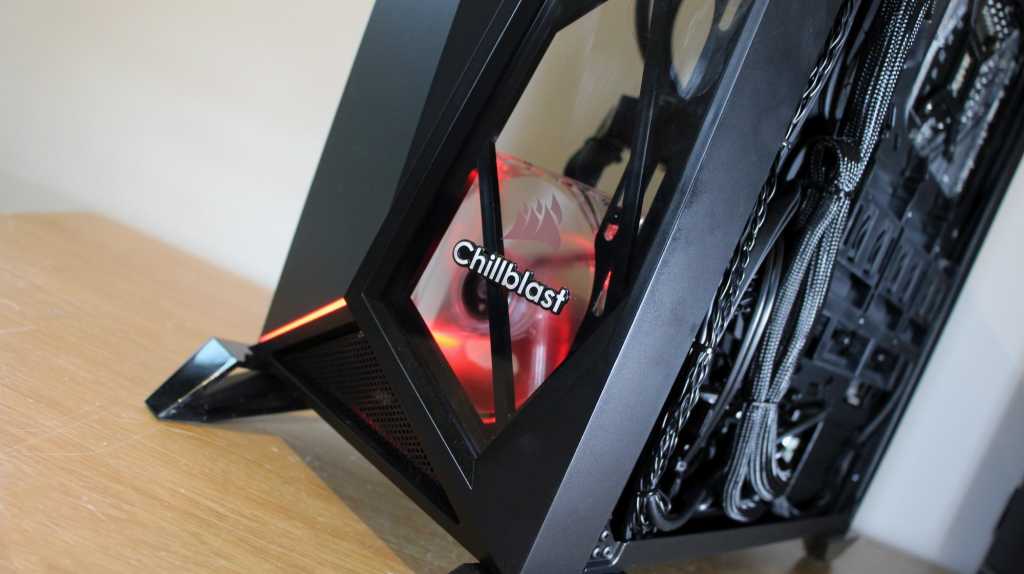 This Chillblast gaming PC lives up to its name with excellent all-round performance, including comfortable framerates at 4K resolution and Ultra detail. It’s more expensive than the competition but it’s not an outrageous price if you stick to the base spec which we reviewed. You’ll be future proofing yourself so it’s an investment. We have only minor complaints here.

The Chillblast Fusion Juggernaut 2080 has a name that suggests computing dominance – but, pleasingly, a price that sees this machine fall comfortably into the gaming market.

Instead of breaking the bank, this machine has a specification that may break benchmarks. Its new Core i5 processor has a hefty overclock, and it’s packing an overclocked version of one of Nvidia’s latest graphics cards.

This machine will set you back £2,049 from Chillblast. That’s around £500 more than the recent Overclockers UK Radiance RZ, and it’s also a little pricier than the Yoyotech BlackBox SP, which weighed in at £1,649.

The Yoyotech Warbird i7S is another option if an RTX 2070 will suit.

As usual with Chillblast, it’s possible to customise this machine if you need to its components.

Beefier Core i5 and Core i7 chips are available. The graphics can be upgraded to an RTX 2080 Ti, and the memory and storage can also be given a boost. There are sound cards, power supply and cooling tweaks available, and dozens of different cases. You can even choose different thermal paste, better cable management or an expedited build time.

There are hundreds of different configurations available if you want to change an aspect of the Juggernaut’s specification. That’s good, but bear in mind that the specification we’ve reviewed here is the most affordable version of this rig – so you can’t cut back in any department to save some cash.

Check out our chart of the best gaming PCs.

The Corsair Carbide SPEC-OMEGA is being used in plenty of PC builds these days and it’s easy to see why it’s popular.

It’s a mid-tower case, so it won’t take up a huge amount of room, and it looks superb. The front panel is an angled construction of mesh, metal and tempered glass that shows off RGB LEDs, and the top has a similar angled design.

The SPEC-OMEGA sits on dramatic feet that rise high enough to deliver solid airflow from the bottom of the chassis, and the side panel is made of tempered glass. There’s a smart strip of lighting at the front of the machine.

Build quality is excellent, and you get pairs of USB 3 and audio ports at the front of the machine. Sadly, there’s no USB Type-C.

The Chillblast’s interior impresses. The motherboard tray has rubber-ringed cable holes, and there’s plenty of room behind the sturdy metal for cables. Around the back you get a trio of neat 2.5in SSD caddies that don’t require tools.

Chillblast has done an excellent job keeping its build neat. Around the back the major cables are lashed together with cable-ties. At the front, Chillblast has routed cables carefully and kept all of the wires clear from the bottom of the board. The CPU is chilled by a Corsair Hydro H100x with two 120mm fans, and this hefty unit is kept out of the way in the roof – so it doesn’t impede the rest of the rig.

The SPEC-OMEGA has few real faults. Instead, we only have a few minor concerns.

There’s no PSU shroud, which means the bottom of the case doesn’t look quite as neat as other enclosures that do have shrouds. Similarly, the hard disk cages aren’t hidden – and their access mechanism is blocked by cables, which will make upgrading a little trickier.

There’s very little to choose between the Chillblast’s Corsair case and the enclosures used by rivals. The Overclockers UK’s NZXT Noctis was just as angular and eye-catching, and it had a PSU shroud, similar storage options and more RGB LEDs – but no water-cooling.

The Yoyotech’s NZXT S340 is subtler on the outside, but with more lighting and cooling hardware on the inside. It does have a PSU shroud and cable covers to keep things tidy, but it doesn’t have as much room for storage or for working around the components.

Chillblast has locked and loaded the Juggernaut with one of Intel’s beefier mid-range chips. The Core i5-8600K uses the Coffee Lake architecture and has six cores, but no Hyper-Threading. Despite that, it’ll still have ample ability for games, multi-tasking and general-purpose work applications – most of those don’t use more than six cores.

Its normal stock speed of 3.6GHz has been overclocked to 4.8GHz across all cores. That pace is a full 400MHz higher than the chip could ordinarily have achieved across one core with Turbo boost – so it’s a significant improvement. It’s also faster than the newer Core i5-9600K can manage.

The overclocked processor is paired with 16GB of memory, a 500GB Samsung 970 EVO SSD and a 3TB hard disk. That’s a good slate of peripheral parts, even if the memory could be a little quicker. The SSD is easily faster than the SATA drive installed in the Overclockers system.

The Overclockers UK Radiance RZ is more than £500 cheaper than the Chillblast, so some of its components may falter. That machine had an AMD Ryzen 5 2600 processor with six multi-threaded cores, but an older GTX 1060 graphics card and a far slower SATA-based SSD.

The overclocked Coffee Lake CPU helped the Chillblast to single- and multi-core scores of 5,596 and 19,903 in Geekbench. That latter score is a little better than the Ryzen 5 2600 inside the Overclockers UK rig.

The Chillblast was easily ahead of the Yoyotech in the Cinebench test, but a tad slower than the Overclockers UK with its multi-threaded processor. Chillblast’s overclock made its presence felt in PC Mark 10, though – its overall result of 6,605 was almost twice as quick as the Overclockers UK system.

The Chillblast CPU may not be able to compete with the Ryzen chip in one of those tests, then, but that’s the only blot on this machine’s copy-book. It’s got more single-threaded pace than its rivals – and so enough power to avoid games bottlenecks – and enough multi-threaded ability to handle the vast majority of work tasks.

When combined with the SSD’s stunning read and write speeds of 3,551MB/s and 2,501MB/s, it means that this PC will never feel slow – and it’ll rarely struggle to run any application.

The processor is paired with a Palit-made GeForce RTX 2080 graphics card. It’s one of Palit’s GamingPro OC models, which means the core is overclocked from 1,515MHz to 1,620MHz – so you get an improved boost speed of 1,710MHz.

Elsewhere, the card retains its usual 2,944 stream processors and 8GB of GDDR6 memory.

The card also uses the new Turing architecture, which remains a mixed bag. While the RTX 2080 does have the various new architectural improvements delivered by the new design, it also means you get its specialist Ray-Tracing and Super-Sampling cores – and we’re still waiting for those to be properly implemented. Those features may have a big impact, but they might turn out to be damp squibs.

For now, though, the Chillblast’s overclocked RTX 2080 did lead the way in gaming tests. It zipped through Total War: Warhammer II at 4K and Ultra settings with an average framerate of 47fps, and it played Ghost Recon: Wildlands at 39fps. Both games also handled those settings with playable minimums of 30fps.

The Overclockers UK rig couldn’t get beyond a 25fps average in either game at 4K.

The Chillblast machine scored 42,638 in the 3D Mark Sky Diver benchmark. That’s more than 10,000 points ahead of the Overclockers UK rig.

These scores don’t just mean that the Chillblast outpaces its rivals – it also indicates that the Juggernaut can handle the vast majority of gaming tasks. The Chillblast will play all of today’s top games at 4K and with high quality settings. It’ll also run widescreen panels, VR headsets and screens with high refresh rates without breaking a sweat.

Chillblast has used an Asus ROG Strix Z370-F GAMING motherboard. It’s a good gaming board, but it doesn’t offer much beyond the usual features we expect at this point in the market.

You get the usual chunky metal heatsinks around the CPU, across the rear IO and on the southbridge and lower M.2 socket, and there are RGB LEDs in the heatsinks to add a bit of visual interest.

Alongside that vacant M.2 socket are two spare memory slots, full dual-graphics supports and three accessible PCI-E x1 slots. There are SATA sockets empty, and there’s ample scope for adding fans and more USB connectivity. In short, this is a very good board for future upgrades – because there isn’t much that can’t be added.

Elsewhere, there’s familiar Asus SupremeFX audio and beefed-up gaming Ethernet. At the rear there are three full-size USB 3.1 ports and a Type-C connector, but no PS/2 port for legacy peripherals.

The Asus is a good board with numerous expansion options, but it’s not perfect. You don’t get high-end features like an on-board POST display, or buttons for tweaking. It also uses the older Z370 chipset, so you miss out on the integrated wireless internet that Intel introduced with Z390.

The Chillblast’s high-end specification didn’t cause thermal issues. The CPU’s top temperature of 88°C is just about good enough, and the GPU peaked at a fine 71°C. The Chillblast never made much noise, so it’ll prove subtle no matter the situation.

And then, finally, there’s the warranty. Chillblast offers five years of coverage with this machine – two more than any rival.

The Chillblast Fusion Juggernaut 2080 is more expensive than the competition, but it justifies its cost with extra power – especially in gaming benchmarks.

The RTX 2080 card easily beats rivals in every gaming test, and that power means this machine will handle more situations than the competition, and for longer – so 4K, VR and high refresh rate gaming are within reach for the foreseeable future.

The overclocked processor is faster than the competition in most application tests, too. You’ll only need a chip with more cores or multi-threading if you want to run particularly demanding work applications.

Elsewhere, the motherboard and storage are good, and the case is just as tidy, eye-catching and feature-packed as the similar chassis in the Overclockers UK rig.

The Chillblast is significantly pricier than the other systems here, sure, but it’s noticeably more powerful – especially for gaming. It’s an excellent option if you want a powerful all-rounder that’ll last for years.