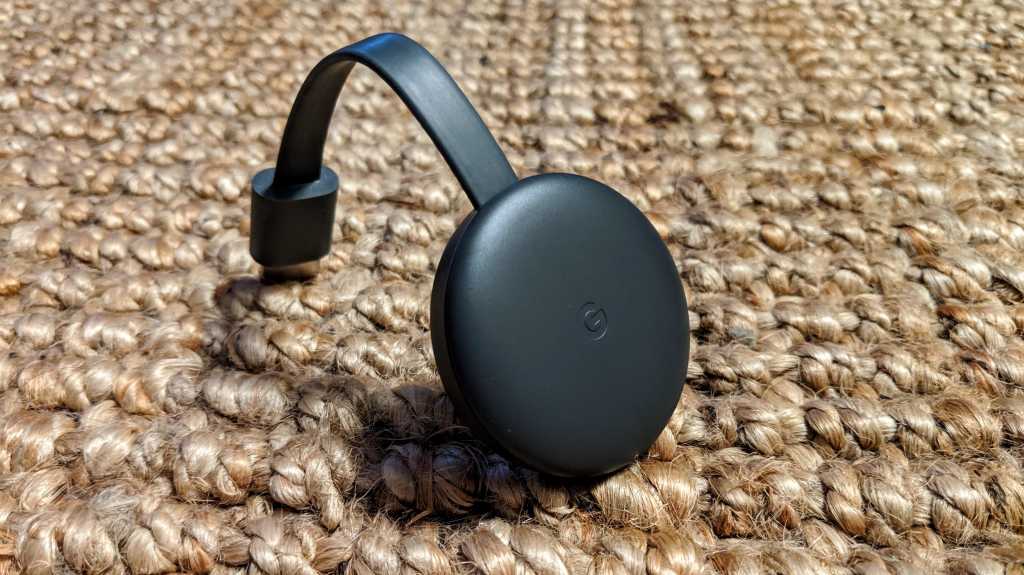 The Chromecast for 2018 is an odd one, not least because Google barely announced the device even existed. On the one hand it’s still one of the best cheap media streaming devices you can get that’s hassle free and easy to use. However, it’s not really any different to the last one so there’s no need to upgrade plus there are some better rivals out there at a similar price.

At Google’s Pixel 3 launch event, which included the Home Hub, a product was launched oh so quietly. And by that we mean it wasn’t mentioned at all and we didn’t even realise until we saw it in the demo area. So is the new Chromecast 2018 any good? Find out in our full review.

Since Google just refreshes the device with the same name we’ll be referring to it as the Chromecast 2018 or Chromecast 3.

Although it’s been quite a while since the 2nd-generation Chromecast was launched, Google has kept the price the same once again.

That means you can get the Chromecast 3 for just £30, or $35 in the US. That’s really not much in a world where most gadgets are hundreds of pounds. It’s one of the cheapest streamers you can buy but has strong competition from the Amazon Fire TV Stick and Roku Streaming Stick Express.

It’s worth noting that this new model, doesn’t replace the Chromecast Ultra which remains the premium 4K offering from Google at £65/$65.

There’s little to say about the Chromecast 3 because it’s really not very different from its predecessor.

The original was a stick but Google switched to a round puck-like design with a cable sticking out and this is still the case. The main body of the device is a little different but we’re only talking subtle changes such as a more rounded smooth design like a pebble.

It’s a shame that Google has ditched the magnets that previously attached the body to the HDMI port to stop it dangling around. Most TVs will hide the Chromecast anyway so it’s not the end of the world.

If it’s not hidden then the change in colours will come into account. Instead of some brightly coloured options, the Chromecast 3 is available in just Chalk and Charcoal like other Google Home products.

The reason that Google chose not to draw attention to the new Chromecast is perhaps because it’s barely any different to the previous generation.

When we look at the core specs, they’re all the same: dual-band Wi-Fi, HDMI, up to 1080p and Micro-USB for power. As far as we’re aware, the antenna is still the same as well.

There might not be many specs to upgrade on a device like this but it has us pondering why Google’s bothered to refresh the Chromecast then make no noise about it at all.

The only real upgrade we can find is that the device can stream 1080p content at 60fps, where the previous model could only do that framerate at 720p. Google also says the Chromecast 3 is 15 percent faster but we can’t really say for sure whether it is or not like we can with benchmarks on phones etc.

We’ve been using the Chromecast 2 for a long time (it came out in 2015) and really it doesn’t feel any different. Timing a few different things starting up does show that the Chromecast 2018 is a little faster but generally its negligible.

Here’s what you can watch on a Chromecast.

So why buy the Chromecast then? Well it’s a fairly hassle-free way of adding smarts to your TV if it doesn’t have the services you want to use.

Google still operates a no-interface method here so everything is controlled from your phone, tablet or laptop. Likely the former so you find the content you want to watch then tap the cast button to send the instruction to the Chromecast.

You can also use the Google Assistant to tell is what to play with your voice, if you know exactly what you want but the command can get quite long and tricky.

If you don’t tell it what to do, it will turn your TV into a digital photo frame which could be useful. The big downside, still, is that Amazon Prime Video is not compatible so they might rule it out instantly for some users.

Some people will prefer to have a remote control and a user interface on the TV, though, and those of you nodding to this will prefer a rival from the likes of Amazon or Roku. There are others, of course, such as Apple but they’re a lot more expensive.