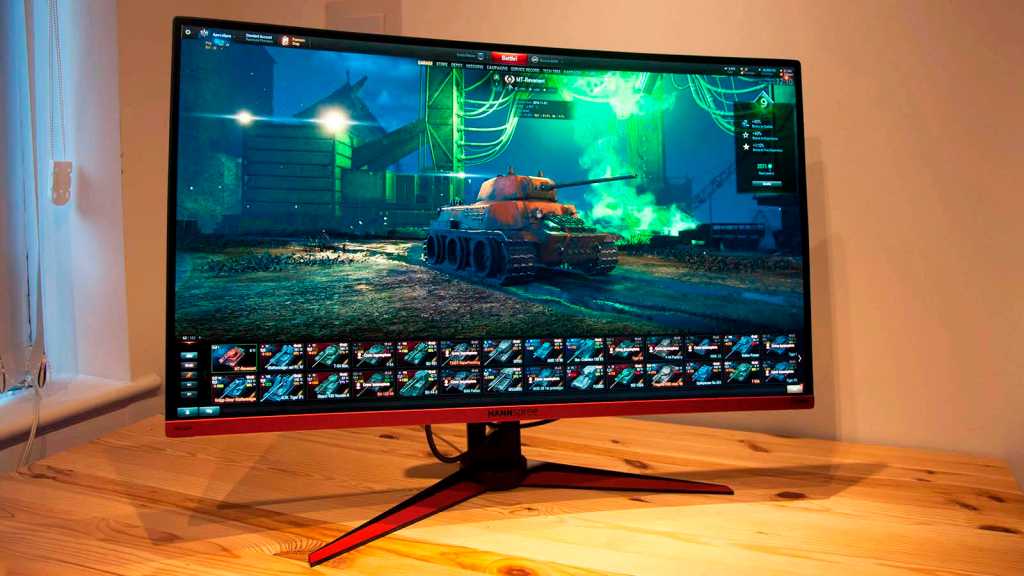 If you can forgive the lack of a USB hub, and speakers that make sounds like two cans and a piece of string, and the sloppy documentation then this is a terrific gaming monitor. It looks great for starters then offers excellent colours and contrast, and LED illumination and a stand that enables full rotation.

One pitfall that reviewers can fall into is reading product specs like they are the result of forensic examination. When more often, these were cobbled together by someone thinking about kittens or the price of car insurance.

We don’t have the time to dismantle monitors and assess each piece, so very often we have to take many assertions by the makers at face value.

Take the lovely new Hannspree HG324QJB for example, a monitor that we presumed was one technology, that turned out to be something completely different.

Comparing it to other 32-inch curved gaming screens, it’s undercut only by the Samsung CJG50 for £319.99, a VA panel that doesn’t have adaptive sync or rotational support.

Costing another £40 more than MSRP is the Viewsonic XG3240C, another VA panel with very close specification that does include FreeSync. But, it doesn’t have the support, though it has a USB hub.

See all of the best gaming monitors in our full chart.

Our first reaction to the HG324QJB when it came out of the box was that it had a vague whiff of MSI design about it, with the striking red on black scheme.

While Hannspree has done something striking to behold, the HG324QJB is a slightly odd mix of the latest technology with a few slightly retro elements.

Before you can use it the HG324QJB needs to be assembled. A relatively painless exercise that involves three screws to attach a V-shaped foot to the support column, and another four to connect that to the screen.

The screen connection is VESA 100, enabling those that have an exotic mount to utilise that instead. What’s impressive about the provided support is that it has 13.5cm of vertical travel, along with 45 degrees of pivot left and right.

The vertical adjustment is enough to rotate the screen into the vertical orientation, should you want to use portrait mode on your computer. As the quoted viewing angles on the panel are 178 degrees in both vertical and horizontal, using portrait doesn’t have compromised visibility.

A knock-out in the rear plastic casing indicates that at some point Hannspree intended to make a simpler foot for this panel, perhaps to lower the cost.

On the back, where you can’t easily see them, are some dynamic looking flashes that are LED lit. This illumination can be set to red, green or blue or auto. We’re still unsure what true purpose of Auto is, because it offers the same three colours, and occasionally changes to what the dominant colour is on the screen. The result isn’t anything like Philips Ambilight, in case you wondered.

Inputs are all placed at the centre back and include dual HDMI 2.0 ports, and one each of a full-size DisplayPort and a Mini DisplayPort, allowing four systems to be connected simultaneously. There is also an Earphone audio jack out, and the power cable connects directly to the monitor with no external PSU.

Hannspree is encouraging its customers to use DisplayPort, including a suitable cable in the box.

There are two disappointments as we see them. The first is that there is no integrated USB hub, an option that gamers like. And, the OSD menu is navigated by five buttons on the underside of the panel to the right, and not an easier-to-use joystick that many screen makers are now including.

These aren’t deal breakers, but these features could have been better.

As we’re corralling negatives, we should also mention the horrible 1.5W speakers that are in here that we wouldn’t recommend you use if you like music, or any sound. They’re dire, and should have been left out.

That said, once you turn on this monitor, you could easily be distracted so much by the colours and speed of this panel that you could easily ignore its other minor failings. On the specification sheet this monitor uses IPS technology, so we put it through its paces assuming that was the case.

We connected the HG324QJB to our monitor test computer using the DisplayPort cable included in the box and executed a display analysis using the Spyder5 Elite+ DataColor calibrator.

Let’s start with uniformity of the backlight, which is often overlooked by many makers in their designs. The HG324QJB has one of the most consistent backlights that we’ve seen, ever.

It’s slightly dimmer in the top centre by 12 percent, but the rest of the entire panel is in the 2-3 percent range, and three locations are within a percentage point! It’s slightly less uniform as the brightness declines below 50 percent, but we’re talking 4 percent at worst.

Quoted brightness is 250cd/m2, and our tests revealed that to be slightly undersold with 100 percent brightness generating 273cd/m2.

But, where this panel truly shines in the colour gamut, being 85 percent of NTSC and AdobeRGB, and 100 percent of sRGB. The calibrator can’t represent more than 100 percent sRGB, so the Hannspree quoted 110 percent of sRGB can’t be confirmed. However, looking at the colour coverage, 110 percent appears highly likely, as the triangle around sRGB has a clear border in all directions to the output of the HG324QJB.

Plenty of colours won’t always translate into being highly accurate, but for a gaming display, the result is a very rich and vibrant display with plenty of subtle colour shades and tones.

Contrast is also good. Although, we didn’t get anywhere need the 3,000:1 ratio until the brightness dropped below 50 percent. Typical contrast at 100 percent brightness is 810:1, which is highly respectable.

If there is a weakness here, it’s in the tone response curve, which has a very curious kink in it, instead of the usual smooth progression. A Gamma of 2.1 wandered out to almost 2.2 before cutting back sharply to track 1.9 from 70 percent of input RGB.

It’s difficult to assess what is happening there, but it is hardly anything that an owner would be able to see on the screen in a quantifiable way.

It was at this point in the proceedings we started to scratch our chins in the way that detectives do in procedural shows when a crime screen fails to make sense.

Because these numbers don’t fit with any version of IPS technology that we are familiar. Its refresh is way too fast, has a greater contrast ratio than seems plausible, and the colour representation is even better than IPS technology normally achieves.

And, almost all the competitor monitors are using VA technology.

After an email exchange directed back to Hannspree, it was finally admitted that this is indeed an SPVA design and not IPS as per the documentation. Given that other reviews and numerous resellers have this listed as an IPS panel, this is an unfortunate mistake.

So we are clear; VA offers better contrast and colours, but IPS has better viewing angles and lower power consumption. But, as we’ve mentioned already, as there aren’t any IPS panels at this size, curve and speed, so the choice is a moot one.