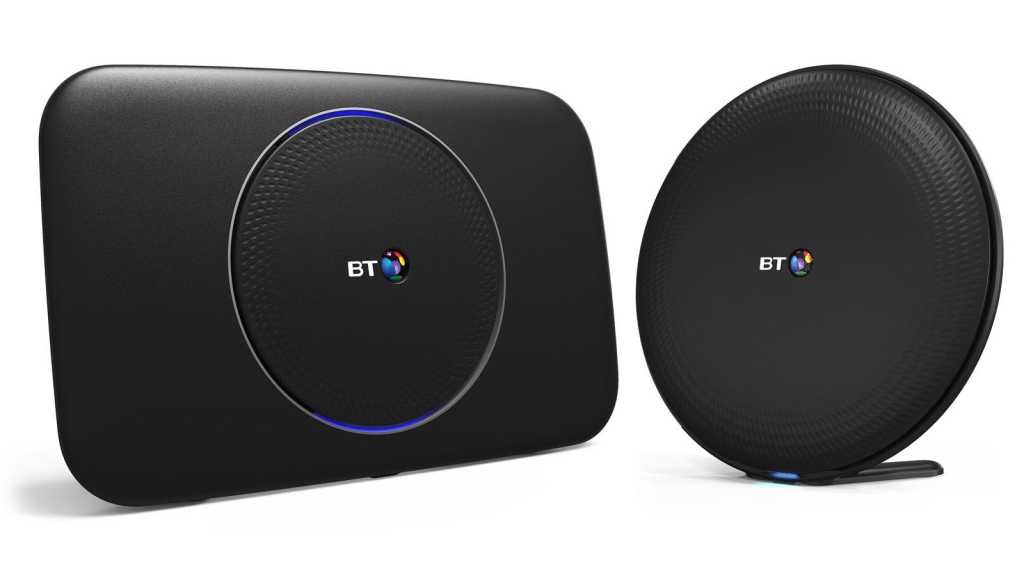 This is a mesh Wi-Fi system like no other. It’s really a BT broadband service which combines an upgraded Smart Hub router, add-on Wi-Fi discs plus a 4G data connection (if you opt for BT Plus) which maintains your internet connection should the main broadband go down. It could be a good option for home workers who can’t afford to be without internet, but there are certainly cheaper ways to get a mesh Wi-Fi system if it’s whole home Wi-Fi coverage you’re after.

The routers that are supplied by internet providers are radically different from those sold by the likes of Linksys, TP-Link, Netgear or any other router brand.

Because where named brands are looking to pack all the very latest technology into their products, a service provider merely wants happy customers. And that means the variety that won’t ring up tech support with a difficult problem, or terminate their contract in frustration.

Therefore, ISPs tend to favour technology that’s reliable without being remotely experimental and they also don’t want to provide any more things to configure in the routers firmware than is genuinely necessary.

And, finally, they also need to make the device at a price that the service can acceptably subsidise for new customers.

Given this exacting brief, how the Smart Hub 2 turned out isn’t a huge surprise. If you’re still in the dark, this is BT’s latest wireless router and it has built-in support for mesh networking.

Given all this talk of Smart Hub 2 and routers, you’re probably wondering what exactly BT Complete Wi-Fi is. Put simply, it’s a combination of the Smart Hub 2 router and extra Wi-Fi Discs. This may sound similar to other mesh Wi-Fi systems we’ve reviewed, but it’s the only one which you have to pay for on a subscription basis.

Note: unlike other wireless routers, the Smart Hube 2 is only for BT customers. It won’t work with other internet service providers.

If you’re an existing BT customer, the Smart Hub 2 costs £65 plus an excessive £9.99 delivery charge, making for a total outlay of £74.99. This price doesn’t include the associated Wi-Fi Disc, as the only way to get this is to sign up for the Complete Wi-Fi package which is a paid bolt-on on top of whichever broadband package you choose.

Initially, Complete Wi-Fi was only offered to new BT Plus Customers (the package which fuses home broadband and 4G mobile data services to offer a backup should the main fibre link to the house go down). But as of 11 January 2019, anyone on a ‘Superfast Fibre’ package can have it as well, even on the Essentials plan.

As part of the review package, BT sent us a single BT Wi-Fi Disc, a device that essentially provides a means to extend Wi-Fi coverage around the home using mesh technology.

This hardware is not to be confused with the white discs which make up the BT Whole Home Wi-Fi, that looks almost identical in many respects. That’s a standalone system which can be used with any router, whereas the Wi-Fi Disc is exclusively designed to work with the Smart Hub 2.

The service comes with a ‘Keep Connected Promise’, where BT promises that you will have Wi-Fi reception in every room in your home. And if that isn’t the case, BT will provide two extra Wi-Fi Discs free of charge.

Should that not resolve the coverage issue, BT will give you £20 back.

As you might be paying £66.99 for the combination of 1GB of mobile data and broadband per month on BT Plus, that’s not as generous as it may sound.

Physically, the new BT Smart Hub 2 is almost the same size as the original Smart Hub, the largest of the router series that started with the original Home Hub 1.0 back in 2004.

And, many of these have had multiple versions made by different manufacturers including Gigaset, Sagem and Huawei, and others.

If this seems a little familiar, that’s because this specification remains unchanged from the original Smart Hub, as BT hasn’t added 802.11ax or anything new and exotic. Or rather, it did but not in a way that makes the hardware much different from its predecessor.

One area where has radically changed, and that is the inclusion of DECT technology into the router.

BT sells a wide selection of DECT phones for customers that use their landline phone service alongside broadband, and for them to work, they normally need one phone with a DECT master base through which all the phones can communicate.

Smart Hub 2 has two DECT antenna and the functionality to enable any DECT CATiq 2.1 compliant phone to work with the hub without needing a base station.

There is also an FXS phone port on the hub that opens up the prospect of VOIP calling with a handset directly wired to the router.

That’s nice, but for most people the most important change is the new Wi-Fi Disc devices that the Smart Hub 2 can work with to create a mesh network in your home.

The Wi-Fi Disc itself is 170mm in diameter, comes with a power pack and can be wall mounted. On the rear is a single Ethernet port enabling it to be used on a wired backbone (ethernet backhaul), although it is designed to work by establishing a wireless connection with the Smart Hub 2.

In operation, it provides an entirely seamless extension to the Wi-Fi service where devices moving between it, other discs, and the router are entirely oblivious to the transitions.

You can get this technology from other mesh systems, and we’ve reviewed and recommended the best mesh Wi-Fi kits.

Our first test was to do a direct comparison between the broadband speed with the original Smart Hub and the new Smart Hub 2, and the difference was negligible.  If BT put anything in here to achieve better Infinity performance, then it had zero impact in our test environment.

Where it was notably better was in the strength of Wi-Fi signal it can maintain and the speeds available, especially at short range. Over a series of tests, we estimated that the new Smart Hub 2 was on average about 10-15 percent quicker than its predecessor, and generally better as managing multiple demands on its services without choking or entirely ignoring client devices.

The only downside to Wi-Fi on this device is that unlike its predecessors, there is no option in the user interfce to split the 2.4 and 5GHz ranges into different SSIDs, something that is necessary with some older Wi-Fi hardware that needed to be directed to the right channel range.

Where the solution becomes more spectacular is when the Wi-Fi Disc is added to the mix, creating a much larger area of strong signal reception. BT has even created a new feature in the My BT app that is designed to help you place the Wi-Fi Disc at the optimal location; close enough to the router to relay efficiently, but far away to extend the coverage.

Should you have an exceptionally big property, BT can provide another two Wi-Fi Discs in addition to the first you receive as a BT Plus customer, expanding the signal coverage even further.

The new Smart Hub 2 is better, but is it worth it if you already have a Home Hub 5 or first Smart Hub? That depends on how big a house you have.

Because for a small home, the differences are going to be small, and mesh technology won’t help unless you have a loft conversion or other room that is too far from the main router for a good Wi-Fi connection.

For those with a large property with Wi-Fi black spots then this is an excellent upgrade if you are an existing BT Plus customer, or you like DECT phones.

And, that’s the rub. Because this mesh solution is aimed squarely at the small percentage of BT UK customers who have a very big home and are happy to pay a monthly fee to avoid having their friends and family whine about the Wi-Fi signal in the fifth bedroom.

It’s mildly disappointing that the Smart Hub 2 didn’t include 802.11ax technology or WPA3 encryption, but these standards haven’t crystallised to the point were BT feels comfortable including them. Maybe we’ll see them in the Smart Hub 3, circa 2020.

The other stumbling block is, as we’ve said, you can buy a mesh Wi-Fi system with three units for as little as £79 from Tenda, and even a more expensive tri-band system won’t cost as much as paying monthly for BT’s system.

Better than the original Smart Hub in many subtle ways, but a significant advancement for those that have a home large enough to need Mesh technology.

The choice not to make mesh Wi-Fi available more generally might backfire on BT, as the likes of Linksys, Asus, TP-Link and Tenda and others sell kits reasonably cheaply, and don’t insist on a monthly charge for them.

For those still using a Home Hub 3 or earlier, the Smart Hub 2 is a decent upgrade, unless you use equipment that needs independent SSID names for the two frequency ranges. If you do, then you might want to consider the original Smart Hub instead.