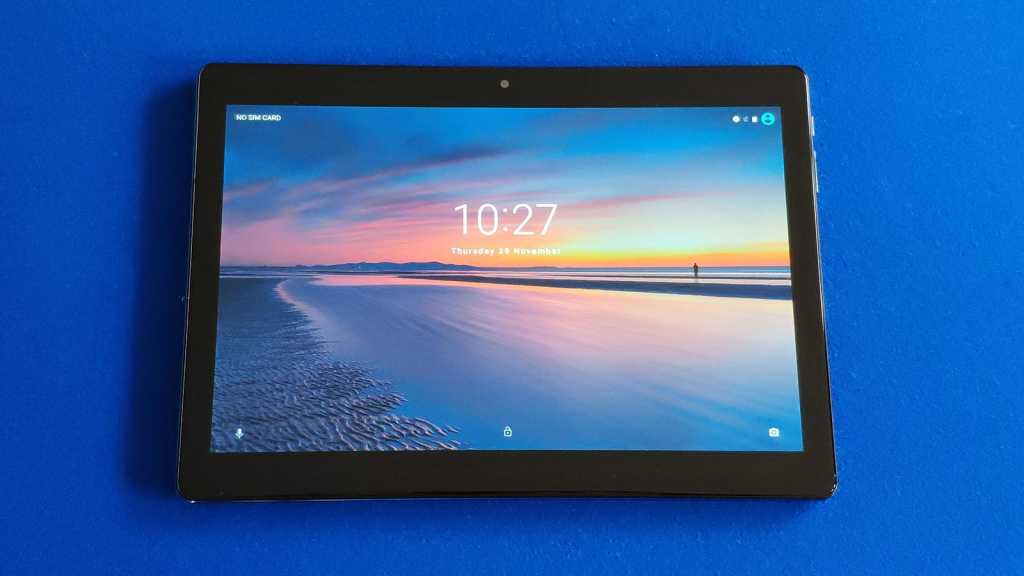 We’d be lying if we said Chuwi had not cut some corners in this budget Android tablet, and it’s by no means a premium design. But in return for not a lot of money it also has a lot to offer, including 4G connectivity and a large 2K screen on which to watch movies, play games and get things done. Timely operating system updates are a concern, but the Chuwi Hi9 Air remains a functional and good-value tablet under £150.

A deca-core processor, 10.1in 2K screen, dual-SIM and microSD support all under £150 sounds incredible for an Android tablet. The Chuwi Hi9 Air certainly has plenty to offer at this price – but it’s not all plain sailing.

GearBest supplied our review sample, and this is where you’ll find the cheapest price on the Hi9 Air. Right now a flash sale brings the price down to just £142.74, from a previous retail price of £190.55 – click here to buy.

That’s shipping from China, so if you factor in import duty (charged at 20% of whatever value is on the shipping paperwork) it is a little more expensive, but still under £200.

If you’re not comfortable buying from China, or were hoping for faster delivery, you can also buy this budget Android tablet from Amazon for £222.99 in the UK and $239.99 in the US.

These days Amazon has the dwindling budget tablet market largely sewn up with its Fire line, but the lack of support for Google Play and full Google services is a pain and can be offputting for some users. We’ve tested a number of full-Android 10in tablets in our budget tablets round-up, mostly hailing from China, but this Chuwi Hi9 Air is the best we’ve seen below £200.

The marketing for this tablet makes it sound very impressive – a full metal build, a 7.9mm-thick chassis, and a 10.1in 2K screen. For the money those things are pretty good, but this is a long way from a premium device.

Let’s start with that full metal build. Actually, there’s a plastic strip at the rear that you pull off to reveal the two SIM slots and microSD port. Why Chuwi couldn’t have opted for a pin-operated tray we don’t know, because this alternative is horrendous. It makes the tablet feel cheap and nasty.

When you first prise off the panel you wonder whether doing so was even a good idea, since its plastic construction feels as though it could break at any moment. And when you return it to position it’s difficult to get it to sit right, and even when you do it doesn’t lie completely flush with the rear panel. From then on you’ll always notice it.

The Hi9 Air is indeed 7.9mm thick (or should we say thin), but it doesn’t feel much like an ultraportable device at 550g. This is a chunky tablet, with similarly chunky bezels (which, somewhat annoyingly, are slimmer at the sides than they are top and bottom). It doesn’t feel especially tough either, and there’s no Gorilla Glass to protect the screen should it fall from your grip.

And then there’s the screen, which would be so much better if it weren’t for thousands of fingerprints marring the view. These are very noticeable, and not only on the front of the device but also its metal rear. We constantly wanted to be wiping clean the display.

It has a 2K resolution of 2560×1600 pixels, with an aspect ratio of 16:10. There’s nothing wrong with that, although it’s starting to look a little old-hat in the face of 18 or 19:9 devices coming on to the market – admittedly most are smartphones, but with its 4G support this is in essence an oversized smartphone and even has Phone and Messages apps.

Chuwi also claims a screen brightness of 400cd/m2, which is way off the mark. In our own tests we recorded a maximum brightness of 218cd/m2, which looks very dull and is not going to perform at all well in bright light. If the screen is capable of more, we can only presume Chuwi has restricted it to prolong battery life.

This is a Sharp IPS panel, and if you can get around the brightness issue it fares pretty well. IPS produces realistic colours and offers strong viewing angles, and at 10.1in this is a useful size for playing games and watching films.

It’s a 10-point capacitive touchscreen, but we found that on occasion it wasn’t always responsive right at the far edges of the display, so we needed to change the screen orientation to access some features in select apps.

Also in testing we noticed light bleed from the top corner of the display as we were applying pressure to clean the screen, but of course we couldn’t replicate the issue when it came to writing up the review. So perhaps it isn’t as big an issue as we first imagined.

The resolution is impressive for a budget tablet, though you will still find some apps that have not been optimised for the large panel and thus have fuzzy-looking icons – the camera app is a good example.

Did we say camera? Yep, there are 5Mp (front) and 13Mp (rear) cameras on the device, and you’ll even find an LED flash at the back. They are functional, and make possible video-calling, but no-one wants to be that person using a 10in tablet as a camera. And it’s just one more thing that doesn’t lie flush at the rear.

Though you can use the Hi9 Air in landscape or portrait mode, the positioning of its front camera, power and volume buttons suggest its intended for landscape use. There are no other buttons here, so rather than a physical home button there’s an onscreen button instead. There’s no fingerprint scanner for secure login either.

We’re pleased to find Chuwi has positioned the dual speakers at the top edge where they won’t fire audio into your palms or the desk. Also along this top edge is a 3.5mm headphone jack, so if you’re displeased with their quality you can bypass them all together. We found them too quiet and lacking in bass, but much better for pop music where distortion is less noticeable.

The charging port is also here, rather than at the bottom where you might usually expect to find it. This isn’t because it might get in the way of a keyboard dock, since there is no provision for one. If you want to hook up a keyboard for typing you’ll need to connect one over Bluetooth 4.2.

It’s an old Micro-USB rather than USB-C version, and it will charge the 8,000mAh battery inside this Chuwi in around three hours. Once full it will then keep going up to 72 hours on standby or 5.5 hours with heavy usage, says the company. In our own tests we recorded 8 hours 15 minutes in Geekbench 4’s battery test, which isn’t at all bad if not the best we’ve seen before.

We would also have liked to have seen a mini-HDMI output for hooking up the Chuwi to a TV, and there’s no integrated support for casting either. But connectivity is otherwise pretty well covered, lacking NFC but supporting dual-band 802.11ac Wi-Fi as well as GPS, A-GPS and GLONASS.

And there’s the aforementioned dual-SIM slot, which supports all three UK 4G bands, meaning you can carry on using the tablet when you’re out of range of a Wi-Fi hotspot. The mobile connectivity is not as fast as you might expect on a smartphone, but it’s functional and could come in handy.

What’s more, you don’t have to sacrifice one of these SIM slots for a microSD card, as you do on so many dual-SIM devices. This Hi9 Air will accept two SIMs and a microSD card, the latter boosting the 64GB internal storage by up to 128GB.

Inside the Hi9 Air is a deca-core Helio X20 processor with integrated 780MHz ARM Mali-T880 graphics, paired with 4GB of LPDDR4 RAM. That sounds more impressive than it is, but for most users it will be fine for most tasks, and even some casual gaming.

All those cores helped bump up Geekbench 4 multi-core performance to 5066 points in our tests, but the single-core score was much lower at 1661 points. That’s in line with most mid-range phones, so for a budget tablet you can hardly complain.

In gaming tests using GFXBench the Chuwi recorded 23fps in the least intensive component, T-Rex, which is playable but you wouldn’t want to push it much harder. For casual games and watching movies it will be fine.

In our real-world use performance was mostly good, with some lag when launching apps but nothing unbearable.

There’s no bloatware, which is good, and the operating system is very much vanilla Android Oreo. The only problem is that it’s still running Android 8.0.0 Oreo, with the last security patch delivered in February 2018. While it’s current enough for now, we’re not convinced it will be maintained beyond this date.

The Hi9 Air looks much better on paper than it does in reality, but given the price tag it’s difficult to grumble. It will suit many users for most daily tasks, and the 4G connectivity will be attractive to some, but you do get what you pay for.