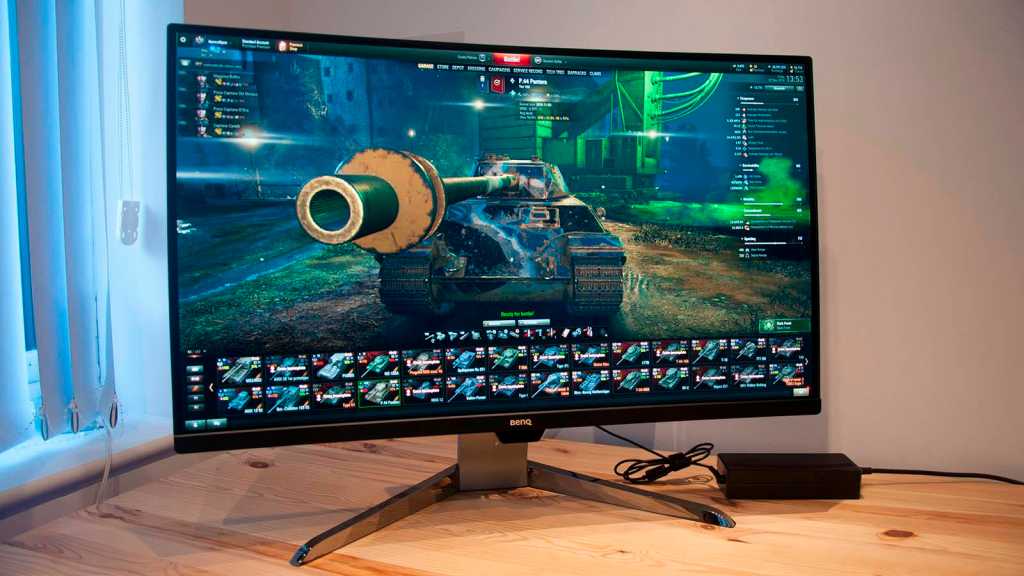 There are so many things to like about this display, offset marginally by a few less desirable aspects. From a colour, contrast and representation perspective it’s a gamer joy. Delivering bright and high contrast images that reveal the enhanced detail in dark scenes. However, given the competitive pricing we’ve seen for 32in curved gaming panels, this is just a bit too expensive for what it offers.

BenQ has a history of offering high specification screens that price-conscious gamers like. The new EX3203R enters the crowded market for larger curved gaming panels with a VA technology offering that sports a VESA DisplayHDR 400 spec.

Is it colourful enough, fast enough and stylish enough to make an impression on the often-cynical gaming community, or will if be engulfed by the many competitor products vying for the same disposable income?

We found it on Amazon for £468.99, which appears to be roughly the going rate for it across a wider range of suppliers. And you can get it it on Amazon US for $499.

That undercuts the £504.96 Asus ROG Strix XG32VQ but is considerably more than the Viewsonic XG3240C and our recently reviewed Hannspree HG324QJB.

What these screens don’t offer is the HDR mode, but they do have a few features that the BenQ EX3203R lacks.

Check our chart of the best gaming monitors.

When the BenQ EX3203R arrived, we were slightly concerned by the size of the box that it came in. As it was substantially bigger than we’d reasonably expect for a 32-inch curved monitor.

We’ve seen this before, and our worst expectations were confirmed when it transpired that this design comes fully assembled with its support base. A base that you can neither detach nor replace with a VESA 100 specification one.

Or, that’s what we assumed initially. We’ve since discovered that you can remove it, and BenQ makes a VESA wall mount transfer kit that you can spend even more money to obtain.

The usual excuse as to why they’re like this is that the foot contains a USB hub with cabling, but this is merely a styling exercise entirely that would like to penalise users that have their own mounts, like more adjustment, or even portrait mode.

Along with that mistake, BenQ also went with an enormous external PSU, another pet hate for monitor owners everywhere. We’re not sure why it did this, because being 8.1kg, it didn’t make the EX3203R noticeably lighter without it mounted inside.

Moving on, this is a very well-constructed screen with an elegant aesthetically when unpowered, and a brash and colourful one when running. All the inputs are centre placed, and BenQ provides one of those break-or-misplace thin plastic covers to make adding or removing cables even more of a hassle than it should be.

There are dual HDMI 2.0 inputs, a full-sized DisplayPort 1.4, headphone jack and three USB 3.0 ports. One of the USB is a Type-C, and this is the upstream path, and the others are conventional Type-A ports for downstream use.

The Type-C can also be used to drive the monitor as a display, although only three inputs work at any one time so you will need to choose an HDMI or DP input that you won’t use in that scenario.

A headphone jack is almost mandatory on screens these days. If you want sound, you will need to use this or have external speakers, because BenQ decided not to include speakers on this model.

BenQ has chosen buttons along the right-side bottom edge of the panel to access the screen menu, though at least the menu is organised so that it lines up with the buttons, making it easier to use.

Styling, inputs and controls are parts of most monitor designs, but the discerning gamer is looking for the right panel above all else. As with every 32in curved gaming screen out there we could find, the BenQ EX3203R uses VA (vertical alignment) screen technology.

VA is very good at contrast and colour representation, though it can’t match IPS or TN for the speed of pixel response.

Some effort by BenQ has gone into tweaking the response time, and it quotes 4ms (GtG), quick enough for the average gamer. The maximum refresh is 144Hz, and if you use a modern AMD video card, it can also be persuaded to enter a variable sync mode as defined by AMD’s FreeSync version 2.

For those using an NVIDIA GPU, simply select 144Hz and enjoy a relatively smooth ride, if your graphics card can generate a 100fps or more at 1440p resolution.

Some will undoubtedly whine that on a 32in screen that 4K is the optimal resolution, but most gamers don’t have a CPU/GPU combination to drive that with all the details on. Where the 1440p here is a good compromise of providing extra detail above 1080p, but a manageable number of pixels to keep the frame rates fluid.

A big selling point of this design, and possible justification for the price point is the inclusion of VESA DisplayHDR 400 certification.

For those unfamiliar with the vagaries of HDR, it’s our experience that it generally works well on games consoles, and Microsoft has managed to mess it up utterly on the PC.

Therefore, if you put your Windows 10 installation into HDR mode on this monitor, and all others we’ve tried over the past 18 months, the desktop looks horrible. It can work in PC games coded for HDR output, but HDR on the PC is on that very long list of Windows features that don’t work correctly that appears to grow not to shrink.

VESA DisplayHDR 400 is the latest specification for HDR on monitors, and it appears to be a way to create a standard that existing hardware can truly deliver. Because original HDR definitions detailed a brightness level of at least 1,000cd/m2, and those panels for retail customers don’t exist yet.

We’re tempted to think of DisplayHDR 400 as the manufacturers moving the goal posts, though even this is a standard that many ‘HDR’ labelled monitors would be challenged to achieve.

The bigger issue is that software developers have yet to embrace HDR in any substantial way, and only recently have streaming services started offering movies and TV shows that have the extra data components to drive it.

Therefore, if HDR is the reason that you chose this design, you might be disappointed. Not by the product, but in how much use you will make of this facility.

The Spyder5 Elite+ DataColor calibrator has an excellent display analysis tool that makes assessing the performance of monitors less of a challenge.

It concluded that the BenQ EX3203R has a highly desirable colour Gamut, white point control and contrast ratio, decent tone response, but could be better at Luminance Uniformity and colour accuracy.

BenQ quotes 100 percent sRGB coverage for the gamut, and we got 99 percent, which is close enough. The colours are slightly biased to the red spectrum and weaker on the blue, but overall it’s pretty good.

However, at just 85 percent of AdobeRGB, this probably isn’t a display that could be dual purposed for design colour matching.

Tone response is equally impressive, tracking the perfect Gamma 2.1 curve almost slavishly. And, contrast is also remarkably high, hitting a static level of 1830:1 at 100 percent and increasing to 2020:1 by 50 percent brightness.

So where isn’t it brilliant? The rear illumination is the main weakness.

Most monitors exhibit some decline in brightness at the edges, but the BenQ EX3203R has a 9-8 percent decline in the top left and right, and it is brightest in the centre and bottom. This inconsistency has the knock-on impact of making the colours better in the bottom half of the screen with more DeltaE deviation across the top.

Will you notice this while in the throes of mortal gaming combat? Probably not, but its one of the places that the BenQ EX3203R could have been better in our opinion.