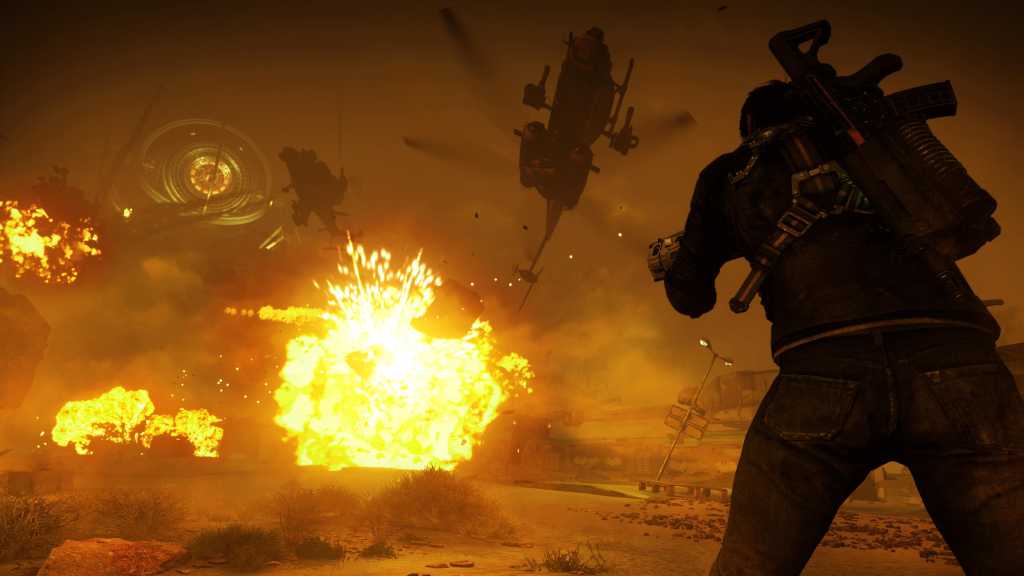 We’ve played four hours of Just Cause 4, and we’re excited by what we’ve seen. It’s the biggest, deadliest and most varied open world of any Just Cause game to date, providing a perfect environment for Rico Rodriguez to explore and, inevitably blow up. We’ll deliver a full verdict once we get access to a review copy in the coming weeks.

We’re weeks away from the release of Just Cause 4, one of the most chaotic games coming out this year. Square Enix promises a bigger, more explosive game than the highly regarded Just Cause 3, so we went along to Square Enix’s London offices to see just how true those claims are.

We’ve played around four hours of Just Cause 4, and here’s our hands-on review.

Just Cause 4: Release date and platforms

Just Cause 4 is set for release on 4 December 2018 and will be available not only on PS4 and Xbox One, but PC too.

You can pre-order the game ahead of release from the likes of Amazon, Argos and GAME in the UK, while those in the US have the option of Amazon or Best Buy.

Rico Rodriguez is back for more explosive action in Just Cause 4, this time set in the fictitious country of Solís in South America. It’s an open world game, like its predecessors, with the largest map of any Just Cause title to date – 1024 square km, in fact. Solís is the home of mercenary faction Black Hand, led by Gabriela Morales, and she has big, world-dominating plans.

It should come as no surprise that an organisation with the name Black Hand rules with an iron fist, oppressing the residents to such a level that they now have no choice but to rebel and fight back.

With the help of the wing-gliding protagonist, rebels fight to remove Solís from Black Hand’s deathly grip. And that’s essentially the idea of the game; you explore new territories, cause chaos, recruit locals and take the fight to the Black Hand.

The Black Hand isn’t the only danger present in Solis; the country has seen freak weather, from sandstorms to tropical storms and even tornadoes, and while the government claims it’s due to Global Warming, Rico knows better. The treacherous weather conditions are man-made, and it’s down to Rico to take the operation down before it goes worldwide.

This is where one of the best new mechanics comes into play; as well as being a destructive force, these freak weather patterns can give Rico an edge in combat. The wingsuit/parachute/grapple combo is back and can be used to ride the high winds of a tornado or quickly loose enemies in the chaos of a sandstorm. It’s all powered by an amazing physics engine, with no ‘fake’ animations to be found. If you can imagine it, chances are you’ll be able to do it.

That leads us on to our favourite feature of Just Cause 4; the customisable grappling hook. You get access not only to a standard grapple to pull objects, but a booster and a Metal Gear Solid V-esque balloon to lift objects into the air. These can be customised not only in terms of activation (tap vs hold vs automatic) but how they perform. The balloon grapple, for example, can be customised to feature bulletproof balloons that’ll hover at 15m for 10 seconds before exploding, leaving the vehicle/explosive barrel/unfortunate enemy to plummet back to earth.

You’ve got three separate loadouts that you can quickly switch between with a button press, and allows you to do some truly amazing stunts. The limit really is your imagination; for example, rather than driving around a huge body of water, we decided to attach balloons and boosters to our armoured vehicle and fly across instead. Believe it or not, it actually worked too!

It’s these kinds of crazy stunts that make Just Cause 4’s open world a joy to explore – but that’s not the only reason. It’s a huge open world that features four different biomes – grasslands, a tropical rainforest, a desert and snowy mountains – with each offering a vastly different experience. As well as different freak weather events, each region has unique locations to explore and different classes of Black Hand to take down.

Main campaign missions are as explosive and Hollywood blockbuster-esque as you’d imagine, but the side missions and challenges leave much to be desired. Admittedly, we only had four hours with the game and much of it was spent exploring and taking on campaign missions, so there may be more to do that we didn’t stumble upon.

Unlike in Just Cause 3, you no longer liberate towns on a town-by-town basis. Instead, you lead the rebellion, slowly pushing into Black Hand territory. You can only expand into territories adjacent to those you already control, and you’ll need back-up to do it. Squads are awarded when you complete certain missions and create enough chaos in a region to inspire a rebellion, and once conquered, you’ll find much less of a Black Hand presence in that area.

And, rather handily, regions you take over provide new and powerful Supply Drop unlocks that can be summoned almost anywhere in the open world.

We’re a little concerned about the NPC AI though. During a mission where you take two recruits around to destroy bombs, we found that the trainees would run around the car instead of getting in it for quite some time whilst being shot at. And on one occasion, one of our accomplices stopped moving altogether. Just what you need with armoured Black Hand reinforcements screeching towards you!

Enemy NPCs don’t seem very intelligent either; they seem to stay in their designated ‘spaces’ and rarely give chase if you run. We were able to wingsuit around a military facility and complete all tasks with minimal gunplay and no deaths, just because we were quick at getting in and out.

In the defence of the game, we were playing a pre-Gold build, so bugs were to be expected. We just hope that it’s sorted by the time that Just Cause 4 is released on 4 December!

While we’re going to wait until we’ve spent more time playing Just Cause 4 to deliver our full verdict, we’re excited by what we’ve seen so far. It’s the explosive, creative, chaotic game that fans of the Just Cause series have been waiting for, and we can’t wait to wingsuit back into Solís soon.