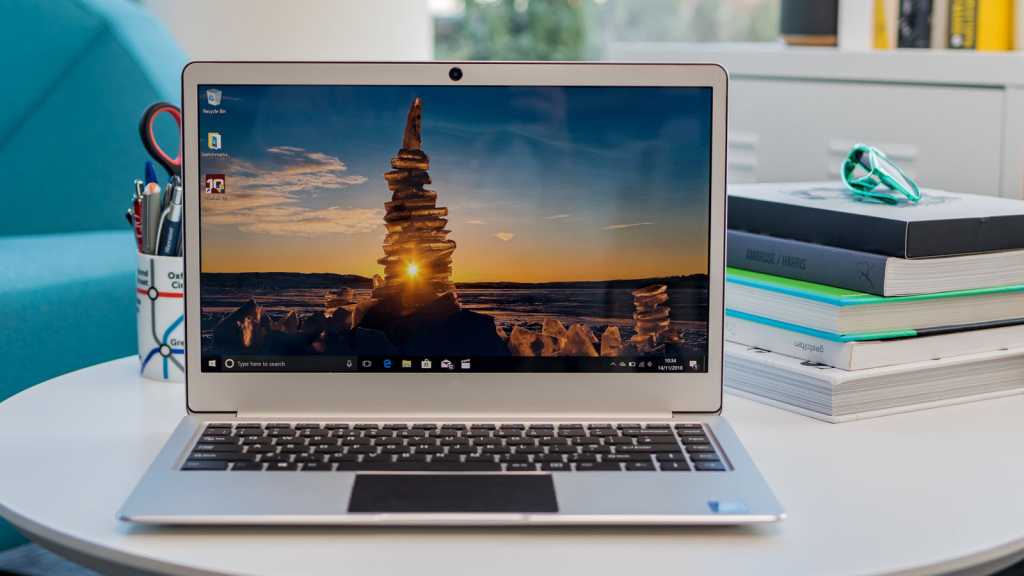 The iOTA Slim offers an impressive level of design, build quality, utility and performance for under £200. It’s not going to be winning any races, but if you’re looking for something portable, stylish and for the most basic tasks then you’re onto a winner.

The low-end laptop market has a reputation for being a bit of a minefield, but iOTA is attempting to change that perception with the iOTA SLIM. The device claims to be a portable, dependable workhorse for all your basic computing needs. We got our hands on one to take a closer look.

If you’re in the market for good value deal on your next laptop, besure to take a look at our best budget laptop chart.

The IOTA Slim comes in two different versions which you can find on Amazon UK.

We reviewed the £299 Pentium version which at the time of writing is being sold for just £189 on Amazon.

At this price point skimping on the processor and RAM is honestly not advisable. The processor is the beating heart of your machine and is responsible for crunching all the numbers, the processor you’re getting in a laptop at this price point isn’t going to be winning any races to say the least – make sure you pick up the Pentium version or you’ll be very frustraited with the speed.

The Celeron version wasn’t available on Amazon at the time of writing, and luckily the better version featuring the Pentium processor is actually the cheaper option at just £189.

iOTA has a solid reputation for designing stylish looking products even at a lower price point and the Slim is a perfect example of this. The design is elegant with the brushed aluminium casing providing a premium feel to the device. It certainly looks and feels like a much more expensive device when you pick it up and handle it.

Opening it up reveals a raised, black keyed, tactile wide-spread keyboard with a well sized trackpad below it. The keys have a very slightly coarse texture which gives a good sense of grip and awareness when typing, and the amount of travel and response from the keys makes it feel halfway towards a mechanical keyboard. We’re impressed by the quality of the typing experience here, personally I prefer typing on this laptop to some I’ve used that are 5x the price.

The trackpad below the keyboard is a good size and remains nice and responsive. There are no ‘dead’ areas on the pad as the sensitivity feels nice and consistent across the entire surface.

The build quality feels nice and solid, the 14in display is surrounded by some thin-ish bezels that don’t feel too intrusive with the topmost one housing the built-in webcam. The screen is able to tilt back to around 120 degrees but no further than that, while the hinge holding the screen in place is a little wobbly it’s nothing to be too concerned about.

A couple of negative points around the design include the placement of the webcam, as when opening the lid of the laptop your fingers are very close to it so you could smudge or even damage the lens. Due to the ultra-slim design, which has obvious weight and portability benefits, the airflow will inevitably suffer which could cause some overheating issues for a CPU that runs at 50-100 percent of its capacity most of the time.

The version we tested contained an Intel Pentium N4200 quad-core processor at 1.1GHz with 4GB of DDR4 RAM. The processor is a couple of years old at this point but gets the job done assuming you don’t want to do anything too strenuous with the machine. However, it’s important to understand that you’re not going to get a gaming machine for under £200 – so we wouldn’t recommend doing anything outside of basic tasks like word processing, internet browsing and film-watching on this device.

It does, however, come with an built-in webcam and microphone which is a nice touch at this price. The quality is nothing to write home about but just having them present adds some nice utility for Skype calls or anything of that nature if needed.

The Slim comes with 32GB of internal storage which after the Windows Installation realistically means you’re have 15GB to play with. While you can bump this up to 64GB with the use of the MicroSD card you’ll have to buy one of these yourself. One important thing to note is that the internal storage is an eMMC which makes it faster than a traditional HDD, but slower than the more modern Solid State storage – this allows the machine to boot up faster than you may expect.

The device comes with Windows 10 Home edition installed, and features a reasonable array of ports including 2x USB, a 3.5mm jack and a Micro SD slot. The Slim weights 1.3kg which is just about the same as the old Macbook Air.

The Slim features a 14in Full HD (1920×1080) IPS display. Once again this display is surprisingly good, showing off some decent colour  and contrast with deep blacks and detailed brighter notes too. The screen also does quite well when viewed from an angle, although it’s not laminated so it does reflect quite a lot of light – and probably isn’t very resistant to scratches either.

The Slim features a 5000mAh battery which is advertised as providing between 6-8 hours of video playback.

Our tests resulted in the laptop losing power after 5 hours and 48 minutes while running a film back-to-back, so just under the promised amount. It’s a middle of the road result, but could be a lot worse, especially going back to the bargain price.

The results below aren’t going to blow any minds but it is important to remember what the device is designed for. It’s light, portable, fast to boot up and very low in price – it is designed to be taken around and used for those basic computing tasks with some limited multitasking. You’re not going to be editing any short films, unfortunately.

iOTA’s range of cheap and cheerful devices are actually holding up pretty well.

The Slim is a dependable, well designed and cost effective little machine. If you’re looking for something portable to take notes on, browse the internet or watch a few films it’s a solid choice – just don’t expect a whole lot more than that.