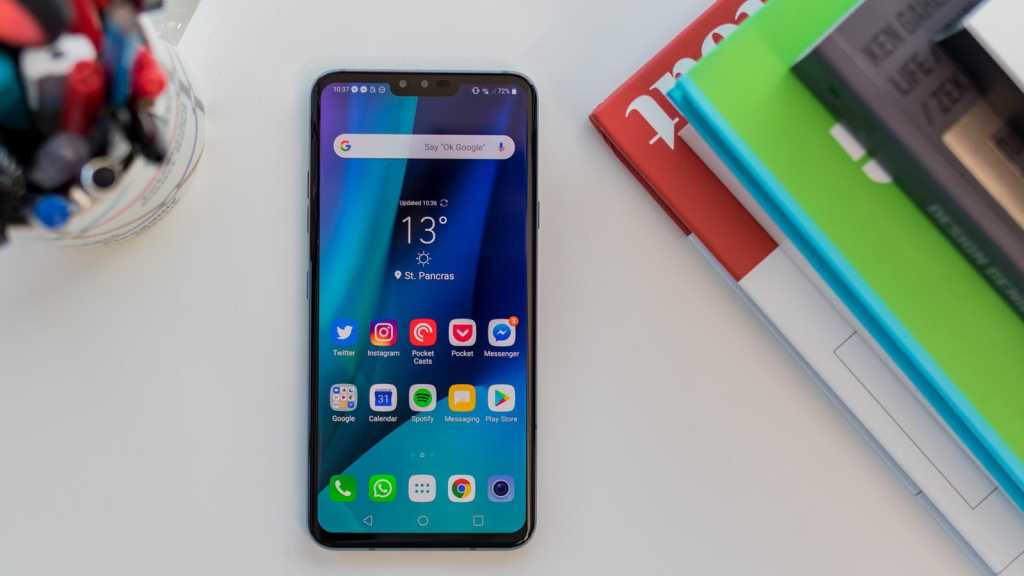 Price and availability aside this is the best LG phone ever. The cameras are accomplished and versatile, the headphone DAC means wired audio is the best in a smartphone bar none and the display is much better than the V30’s. But it’s not available in the UK or Europe and in the US it’s over $900 SIM free, which is galling. It means no one will buy the V40, even though we think you should if it’s the right phone for your needs.

LG makes good phones. The LG V40 ThinQ (plain old V40 from hereon in) is the best one it has ever made with three rear cameras, an excellent display and exceptional wired audio.

It improves on the already great V30 in most areas, quite rare considering that phone’s quality. By all accounts, we should be crowning the V40 with a phone of the year award.

But it’s not on sale in the UK as LG hones in on Korea and the US as its two primary territories and the asking price is exceedingly high. LG’s smartphone sales dip is well documented but the high price and low availability means the V40 is likely to remain a curious enthusiast’s phone.

Yet we still love it.

The only way to get the LG V40 in the UK or Europe is importing it, though you’ll have to pay a lot for shipping.

Amazon US has a $999.99 package of the phone, Bluetooth headset, 32GB SD microSD card and car phone holder.

This is an oddly supremely expensive phone and it’ll struggle to compete on a shelf next to the  iPhone XR, which is $749. If LG wanted anyone to buy the V40, it really should not have made it more expensive than every phone in the world bar the iPhone XS – particularly in the US where iOS is dominant.

Our review unit of the V40 has a lovely matt finish to the glass back. Most premium phones are now glass, both for style and to allow for wireless charging (sometimes: the V40 thankfully has it). But pick up a Samsung Galaxy S9 in black and within seconds it’s a greasy smudgy mess.

Though the V40 is also available in gloss we recommend this matt finish if you can find it. It’s slightly less grippy but means you can’t see any fingerprints, especially in the grey version. It’s a mini revelation.

The phone keeps LG’s fairly utilitarian design seen since 2017’s G6 with a plain back, metal rim and tall front display with Gorilla Glass 5 and a small notch at the top. That display is 6.4in but very manageable in one hand use thanks to the 19.5:9 aspect ratio. It’s LG’s best OLED to date with a 3120×1440 resolution, improving on the sometimes-grainy V30 panel.

Inside there are the specs you might expect with a Snapdragon 845 processor, 6GB RAM and 64 or 128GB expandable storage. It’s a curiously lightweight phone at 169g; LG seems to be going for this option rather than the heavy metal phones of Apple and Google.

Like the Huawei Mate 20 Pro, the LG V40 has three rear cameras and they are by far the phone’s best feature. The set-up is one of the most versatile smartphone cameras you can buy and it’s a real pleasure to use. LG phones have long had two rear cameras to get cool wide-angle shots but adding a third means you can do this and optical zoom.

You can long press on icons in the camera app to live preview all three modes to quickly decide which to use, a neat touch. If you want to take all three photos at once you can with Triple Shot.

There’s a portrait mode for bokeh style shots too. Pound for pound the V40 has the most camera options of any mainstream, smartphone at the time of its launch.

Whether or not you like LG’s processing is worth considering though. The Pixel 3 may only have one lens but the quality of image is stunning and one of the best in the industry. It’s down to how the software processes the image, and LG is most of the way there.

The V40 handles colour well, with a pleasing level of saturation that we prefer to Huawei’s latest that tend to overblown natural greens. But Huawei is still better in the lowest of low light despite the good results of the V40. LG has added Super Bright Mode that automatically kicks in to lengthen exposure time to help with this and it’s pretty good.

Two cameras on the front can handle decent selfies and a wide-angle mode though they do need the right lighting to perform at their best as they are limited to 8Mp and 5Mp only.

Basically, if you want the versatility offered by three main camera lenses you won’t be disappointed. Check out the gallery below:

There is also a crazy number of manual controls for photos and video – the most of any smartphone out there, full stop. You’ll get the results you want, but only if you go looking. The camera app is pleasingly uncluttered if you just want to use auto mode.

The V40 is a very proficient as a video recording device. LG has always pitched the V series thus, and you can shoot up to 4K at 60fps but you lose the blur reduction at that frame rate.

With stabilisation on all other modes and HDR options, if you’re looking to use a smartphone for video the V40 should be considered.

The audio from the V40 is incredible. If the cameras are a rung below the total best for stills then the audio from the headphone jack is hands down the best on any phone, much like the V30 before it.

But playing full size files from the device is the best way to enjoy wired audio here and if you appreciate that sort of thing, you’ll never want to use Bluetooth again.

Despite its high price, then, the V40 is clearly fully featured. As well as the excellent camera and audio it has IP69 water resistance and is Qi charging compatible. It charges very fast with the boxed charger and has headphones in the box too.

Add to this the best haptics on an Android phone. The Pixel 3 is just about as good and the iPhone is still the best but LG has not only used an excellent vibration motor but it’s also integrated it in cool places. Little jitters in the camera app recreate a mechanical zoom and lens focus haptics and it’s a total delight to use.

The Boombox speaker from the G7 makes its move to the V series too and it’s much the same as before. Put the phone on something hollow or resonant and the sound is amplified. It’s fine and loud for podcasts but we still prefer dual stereo speakers on the Pixel 3 or Galaxy S9. And we still don’t think anyone should listen to music for any length of time out of phone speakers anyway.

Battery life is fine but nothing to get too excited about. The 3300mAh size is about average and the phone lasted us a day no problem throughout our time with it and didn’t drain too fast when using GPS for maps or streaming video over 4G. It’s not as long lasting as the Pixel 3 XL or Huawei P20 Pro though.

In benchmarks it performs well, pipped only by the OnePlus 6T which is capable of a higher gaming frame rate.

While LG’s Android skin has improved no end over the last few years it’s still a bit clunkier than it needs to be. Although we prefer it to Huawei’s EMUI it still changes a few parts of Android unnecessarily like the settings menu where things are hard to find, or the app drawer that annoyingly doesn’t keep apps in alphabetical order when you download more after sorting them, and endlessly scrolls on a loops from left to right.

It is not unusable by any means but it’s disappointing that it doesn’t come with Android 9 Pie and instead ships on 8.1 Oreo. LG’s track record for OS updates makes us think it’ll be a while till we see any updates, though it did receive a monthly security update in our time with it.

You can hide the notch with a black bar or make the ears of the display coloured, if you fancy. There’s a physical hardware button to use Google Assistant which is fine – Assistant is better than Bixby on Samsung phones and we didn’t press the button accidentally too often. A physical power button on the right means the fingerprint sensor on the back isn’t a button unlike older V series phones.

Face unlock is also lightning quick but is less secure than the fingerprint sensor, the latter of which you must use for app security.

Also, if you import the phone from Korea you will likely have a ridiculous amount of bloatware preinstalled, as we did. You can uninstall most of it, but not all, and it’s a bit of a turn off when you have to spend ages doing this when you first turn the phone on. Occasionally you’ll come across Korean characters in things like the calendar app but for the most part we got the phone working as we wanted. It just took a while to get there.

At the time of launch the LG V40 ThinQ is LG’s best phone. It’s more of an iteration of the G7 than anything else but that’s no bad thing. It’s not a particularly sexy or exciting phone but with outstanding wired audio in a market that is shunning headphone jacks it’s a welcome differentiator.

The display is the best on an LG phone, the triple cameras are incredibly versatile and this is hands down the phone to buy if you want to record video with a phone.

Performance is outstanding and it’s got all the mod cons like waterproofing and wireless charging. This is one of the best phones you can buy, it’s just so LG that it costs too much at $900 and it’s basically impossible to get outside Korea and the US.