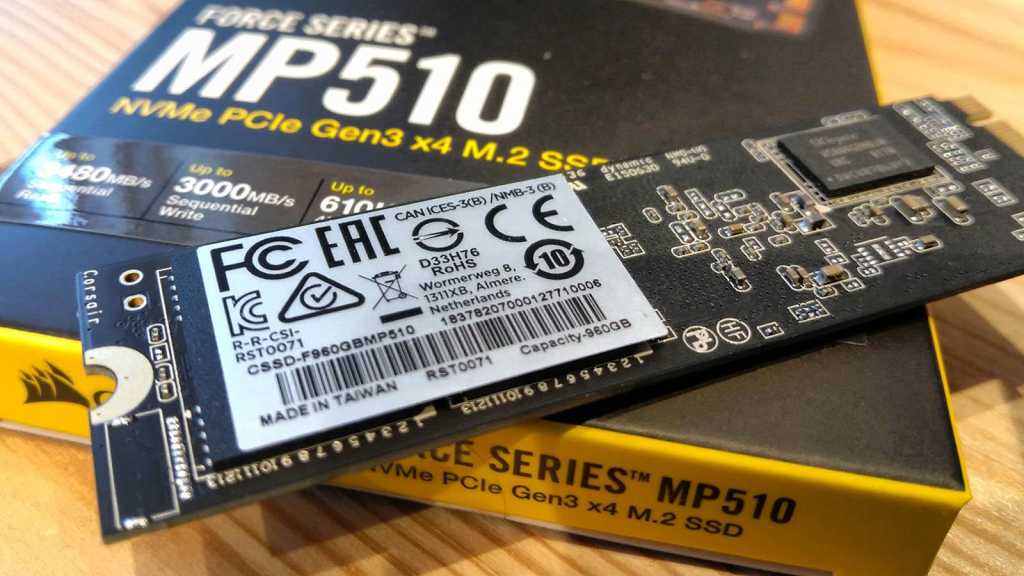 The MP510 has it all; performance, endurance, capacity and price. If this doesn’t kill off the market for SATA SSDs and those unfortunate SATA M.2 drives, it’s hard to imagine what it would take. Get one now, before Santa’s Elves grab them all.

NVMe drives that exploit the bandwidth of x4 PCIe channels have been around for a few years. With eight times as much effective bandwidth as a SATA connected drive, NVMe demonstrates well what flash memory can do when organised effectively.

The issue, until now, has been the price, as NVMe drives have cost multiple times that of the same capacity of a SATA SSD. The new Corsair Force Series MP510 looks to break entirely new ground in delivering a very high-performance drive at prices that are only marginally more than high-end branded SATA SSD.

Is the MP510 the final nail in the coffin of SATA for storage? Find out in our full in-depth review.

Buy it from Amazon UK or Amazon US.

While the spot price of flash memory has had a tough summer, that massive difference on paper doesn’t seem justified by the specifications of each respective product.

If we go back a year, these are the same prices as high-end branded SATA SSDs were demanding, and the difference in performance between those and the MP510 is gargantuan.

Therefore, the price positioning of this product puts SATA SSD in a bind where going much lower isn’t viable for most manufacturers, and it can never hope to compete on performance.

But it also puts NVMe makers on notice too. Samsung can’t expect the current pricing for the 970 Evo or 970 Pro drives, and Intel needs to cut the 760p 1TB drive by at least a third.

Expect prices to tumble for all NVMe drives as we go forward. Check out our chart for the best SSDs you can buy.

The 960GB MP510 that Corsair sent us for review is unusual in that it is one of the first NVMe drives that uses both sides of the board to mount NAND modules.

The choice of this as the review choice is obvious when you look at the chart of capacity options Corsair has, with the 960GB model being the fastest drive overall. 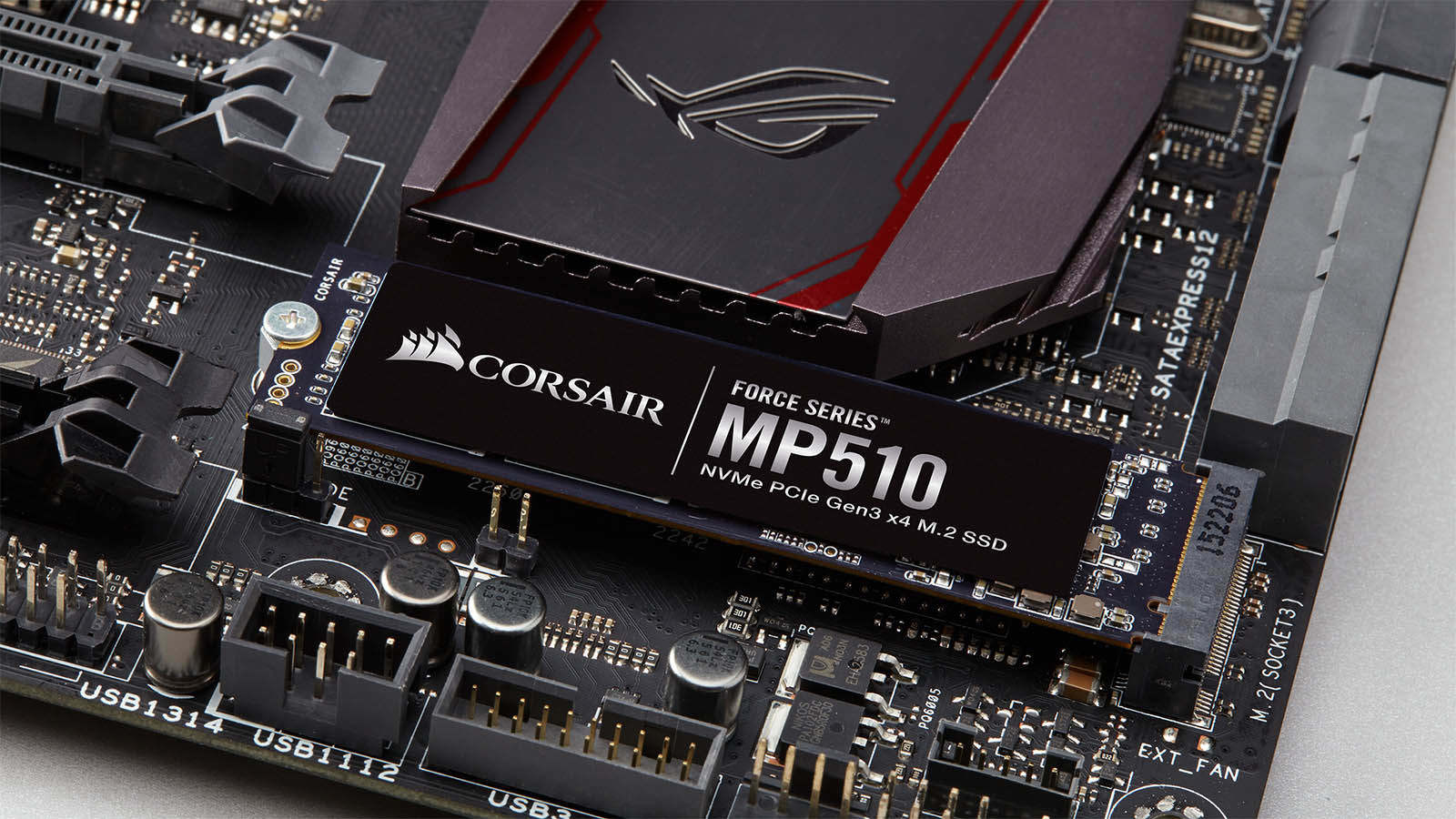 To use one of these in your computer, you either need an M.2 2280 slot that supports PCIe X4 drives or a PCIe slot where you can insert an M.2 PCIe card. And, with that second option sufficient free PCIe lanes to get the full x4 bandwidth to the M.2 module.

With either of those criteria satisfied, the MP510 is very much a plug-and-go solution, where you simply format the drive as you would any SATA connected drive.

There may be better, cheaper or more elegant architectures available, but this solution works very well across a wide range of situations.

With the possible exceptions of greater capacity or a design that can utilise an x8 or x16 PCIe slot, the MP510 represents the better end of what NVMe has to offer at this time.

Unlike other brands, Corsair didn’t rebrand a standard tool to use for cloning drives. Instead, Corsair engineers built their own, the Corsair SSD Toolbox.

The advantages this custom application is that along with cloning, the Toolbox can also update the firmware, modify over-provisioning, and also control the TRIM function. That last feature is only applicable to operating systems that haven’t taken on that themselves, like Windows 10.

It’s also rather small, making it quick to download and install. There isn’t any rocket science in the Corsair SSD Toolbox, but it does what’s required with the minimum of fuss. 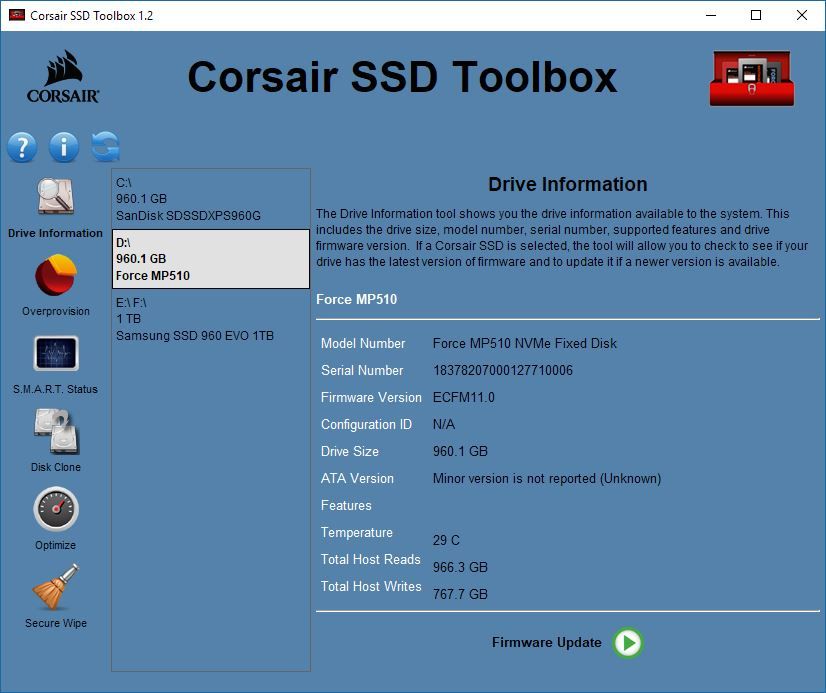 If you’ve not experienced an NVMe drive, then we may recommend buckling up before testing one with the capabilities of Corsair MP510, as it flies!

It’s worth pointing out that the 960GB model is the pinnacle of MP510 performance. With the read speed being marginally less on the 240GB option, and write is reduced to just 1,050MB/s.

The 480GB model has the same read speed as the 960GB, but just 2,000MB/s write performance, and the 2TB big brother matches read speed but can only manage 2,700MB/s writing.

The decline of write speed is matched by a drop in IOPS on the smaller drives. But, they all get a five-year warranty, an MBTF of 1.8 million hours (205 years) and identical shock ratings.

Where they do vary is in respect of TBW (total bytes written), with the 2TB being the most resilient and the 240GB the least. That said, the 240GB drive still has a highly respectable 400TB TBW, and the 960GB review model a gargantuan 1700TB TBW.

That’s still overshadowed by the 2TB drive, with a TBW of 3,120TB. To put that in perspective, that would allow you to write the contents of a 50GB Blu-ray every day for 171 years before hitting that limit.

Even the busiest 4K video editor would have a challenge exceeding the TBW on even the 960GB model in five years, or ten years on the 2TB version.

We don’t assume all quoted numbers are accurate and did our own tests to see if the Corsair MP510 is as blinding fast as predicted.

While real-world testing has its place, synthetic benchmarks have the advantage that our readers can run the same code on their systems and compare those results directly. We tried a wide range of software tools to support our finding, but we’ll concentrate on CrystalDiskMark 6.0.1 and AS SSD as predictable representatives.

As it was released less than six months previously, we took the Samsung 970 EVO as being the obvious drive for the MP510 to beat. 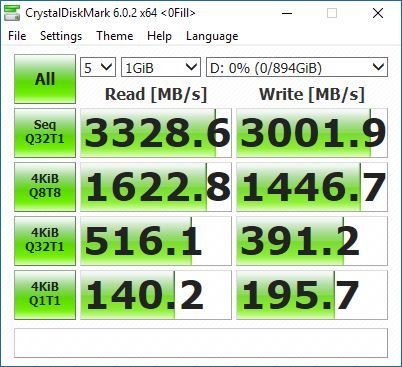 The AS SSD test is a much more demanding analysis than CrystalDiskMark, but confirms both a read and write performance advantage and also presents a positive comparison on the IOPS front, where the MP510 is stronger on reading but slightly lagging on write.

Depending on exactly what Windows 10 is doing in the background when the test is starting these numbers can vary somewhat. From where the Evo is a tiny bit better in a few test results to being massively beaten in others.

For continuity, we performed all tests on the same hardware, a previous generations Intel platform. And, we suspect that on the latest generation, this drive would go even quicker.

Compared with competitor devices, the Corsair MP510 is most like the Samsung 970 Pro, being a notch above the 970 Evo.

Given the stunning performance, we’d strongly recommend that you transfer your existing system to it. As unless you already use an NVMe drive, most systems will experience a significant upgrade by switching to the MP510 as the source for the OS and applications.

There is no price-performance trade-off in this product. It costs marginally more than a SATA SSD and delivers size times the speed, and a much greater resilience than the majority of branded SATA SSD drives.

That said, the actual value proposition of the product does differ slightly across the range, and also in respect to global pricing.

Over the range, the best value drive is the 1920GB model, but the 960GB is very close and offers even better performance if a reduced TBW. Cost per GB is roughly 23p (30 cents) on those drives and just a little more on the 480GB option.

Predictably, the 240GB drive is the worst value, at 29p or 38 cents per GB. As you can see from those numbers the difference between the US and UK cost even accounting for exchange differences is big, being between 30 and 20 percentage depending on the capacity.

Normally we’d suggest ignoring the lowest rung and going up to the 480GB rather than paying over the odds for a smaller drive. But in this case, if you only have the budget for a 240GB mechanism, then it is still worth having, even if the read and write speeds don’t match the larger drives.

The 240GB MP510 is still capable of size times the read and double the write performance of the very best SATA SSD ever made, and only costs about 25 percent more.

If you can afford the larger drives then you get more write speed (up to 960GB) and an extended TBW that should suffice those that beat up their systems every day with huge files.