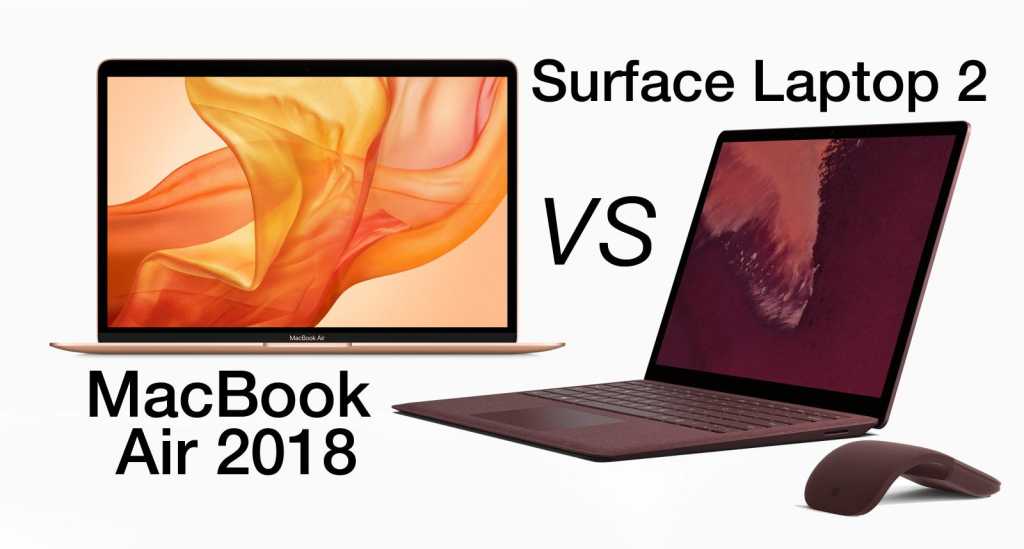 These two laptops offer plenty of features and aesthetics that make them desirable. If you’re a Windows fan then buy the Surface, otherwise the new MacBook Air is a solid workhorse.

Apple and Microsoft have both updated their lightweight laptops, offering users a straight choice between the best in macOS or Windows 10 as their respective creators intend. We compare the two to see which one you should be putting at the top of your shopping list.

Microsoft announced the Surface Laptop 2 on 2 October and it comes in a range of options that can be configured on Microsoft’s site:

It’s also available from a number of other popular retailers, including John Lewis, Argos, and Amazon.

Apple released its new-look MacBook Air range on 7 November 2018, with a similarly wide-range of configurations.

You can buy the MacBook Air directly from Apple, as well as from John Lewis, Currys/PC World, Argos, and other retailers.

Microsoft has kept with the excellent design aesthetics from last year’s original Surface Laptop. The attractive, slim metal chassis comes in a range of pleasing colours – Platinum, Burgundy, Cobalt Blue, and a new Matt Black – all of which have the keyboard surround adorned with matching alcantara fabric.

This gives a comfortable and unique feel when typing, and those worried about the material getting dirty over time should be encouraged by the numerous reports of the original’s stain-resistant qualities.

The 13.5in PixelSense display, with a resolution of 2256 x 1504, is a touchscreen panel. This allows users to get the most out of Windows 10 and its touch-enabled interface.

Ports also remain consistent with its predecessor, although this is a little disappointing as it means Microsoft has omitted USB-C once more. Instead there’s 1 x USB 3.0, 3.5mm headphone jack, 1 x Mini DisplayPort, and the Surface Connect Port.

Since the MacBook Air’s introduction back in 2008 the design has stayed pretty much the same. Now, as the platform enters its second decade, Apple has revamped the entire construction, making it a lot closer to the current MacBook and MacBook Pro line.

It still boasts a unibody chassis, this time made entirely from recycled aluminium, and comes in three colours; Gold, Silver, and Space Grey.

The body is also smaller and lighter than the old design, while finally including a 2K Retina display. Thinning down the device has brought with it a few changes that might not exactly thrill MacBook Air fans.

A new butterfly keyboard replaces that tried and tested classic, and while it’s a third generation variant that includes rubber skirts under the keys to help alleviate some of the issues suffered by earlier versions, the low key travel has split opinion among users.

Apple includes a Force Touch trackpad this time around, one that’s 20 percent larger than before, plus there’s the very welcome addition of a dedicated button for Touch ID, allowing you to log in without a password.

The Surface Laptop 2 also has a biometric security feature, thanks to its Windows Hello compatible webcam that allows facial ID to unlock the device. Ports are at a minimum on the Air, with dual Thunderbolt 3/USB-C ports and a 3.5mm headphone jack on offer.

Both machines are elegantly styled and stand out from most other laptops you’ll find around today.

As you’d expect with laptops released in 2018, 8th generation Intel Core processors are at the heart of each device, but different types. The Surface Laptop 2 employs Core i5-8250U and Core i7-8650U chips, which are both quad-core, while Apple has opted for the Core i5-8210Y processor, which is dual-core.

In theory this should mean the Surface Laptop 2 is faster, while the MacBook Air returns better battery life.

One of the biggest upgrades to the Air is its display. Gone is the fuzzy, sub-HD panel that was good when first released but quickly fell behind the pack. Instead, Apple has graced its 2018 models with a 13.3in display running at a 2,560 x 1,600 resolution.

Microsoft is equally benevolent, with its 13.5in PixelSense display running at 2256 x 1504, but having the additional benefit of being a touchscreen and supporting the Microsoft Pen. A 3:2 aspect ratio makes it taller than a traditional laptop (but better for viewing websites), while the Air retains the normal 16:9 widescreen format.

Touch ID comes to the Air range in the form of a dedicated keyboard button in the top right corner. This allows users to log in just by tapping and briefly holding the key while it reads their fingerprint. The feature can also be used for using Apple Pay when shopping online.

This information is secured in a new T2 Security Chip that keeps everything encrypted and away from hackers.

Microsoft has Windows Hello, that uses the onboard camera to unlock the Surface Laptop 2 just by looking at it. This information is secured by its own TPM 2.0 chip, which the company states offers ‘enterprise-grade’ security.

Either solution works fine, and are certainly an improvement on having to type long and complex passwords to access the device.

The Surface Laptop 2 has an excellent typing surface, with well-spaced keys that respond pleasingly to the fingers.

Apple’s butterfly design is something of an acquired taste. The minimal travel (0.5mm) takes getting used to, and we’ve heard users complain of finger fatigue due to its shallow nature. Conversely, others have said they love the new design. One thing is absolutely certain, you’ll want to try the MacBook Air for several minutes before deciding whether you’re in the former or latter camp.

We’ve only just started our MacBook Air deep review at the time of writing, so battery life is only speculative, but Apple is usually very good at delivering on its longevity claims.

It states that the MacBook Air (2018) should get up to 12 hours of life from a single charge, or 13 hours of continuous video playback in Airplane mode.

In our full Microsoft Surface Laptop 2 review, Chris found that the device survived for 12 hours and 41 minutes in a looped video test. So, it looks like both will provide very similar performance.

Here’s a breakdown of the specifications for both machines;

As these are showcases for the two main desktop operating systems (no offence to Linux and ChromeOS) you’re getting access to the latest features macOS and Windows 10 has to offer.

Sensibly, Microsoft has stopped pre-installing the hobbled Windows 10S platform, and decided on the far more tempting Windows 10 Home instead.

macOS 10.14 Mojave comes as standard on the MacBook Air, replete with the various suite of free productivity and creative apps that make it such a useful device out of the box.

With both operating systems having their strengths and weaknesses, the choice of which is better will come down to your personal requirements. To help see the differences between them, read our macOS vs Windows 10 comparison guide.

Should I buy the MacBook Air or Surface Laptop 2?

Your choice of device will mostly hinge on the flavour of operating system you prefer. The MacBook Air is a solid reimagining of the Apple classic, while the Surface Laptop 2 is one of the best Windows machine available today.

For our money, the latter offers more in terms of aesthetics, features, and allure, but we doubt very much that you’d regret buying either.