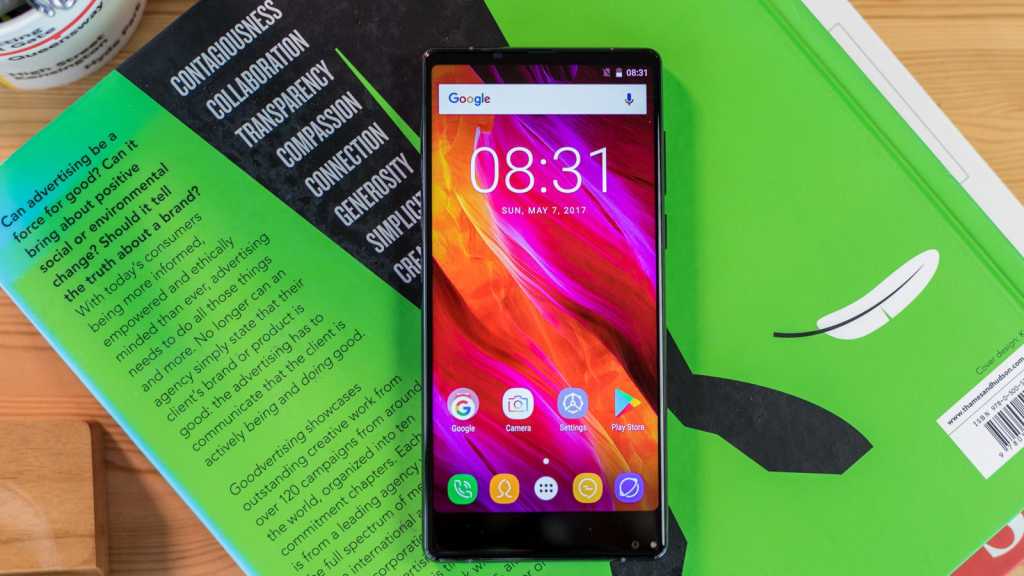 A good screen and decent performance are marred by very poor cameras and bulky design.

Oukitel might not have the brand recognition of other Chinese companies such as  Xiaomi or Huawei, but the company has had some interesting phones in the past. The K10000 Pro is probably its most famous thanks to the enormous battery that lasted up to five days of normal use, or 33-days on 4G standby.

The new Mix 2 is more of a standard offering, but with a combination of decent specs and a 6in display it should find a wider audience. We put it through its paces.

Oukitel doesn’t have a UK or US store and mobile carriers are yet to offer the manufacturer’s products to customers.

However, you won’t necessarily have to import one as sellers on Amazon now offer Oukitel devices. We found the Mix 2 available on Amazon UK for £175.99 and Amazon US for $278.99.

Specialist suppliers of Chinese smartphones are another option, with popular site Gearbest offering the Mix 2 for £213.06.

As with any import, you’ll need to be aware that customs charges may be applied, delivery can be slow, and your consumers rights will be different to those found in the European Union or USA.

See our Chinese Tech buying advice article to see the pros and cons of shopping in the Far East.

At this price you’ll also want to consider the Umidigi One Pro which is available on Amazon UK for £179.99, and the Xiaomi Mi A2 which currently costs £199 on Amazon.

While many Android phones are now curved at the edges and slim throughout, the Mix 2 seems to be cut from different cloth. It’s a blocky device that feels more akin to a Monolith from 2001 rather than a svelte smartphone from 2018.

The 5.99in 18:9 ratio display makes the Mix 2 tall, but thanks to a single thick bezel on the bottom edge the overall dimensions are still manageable at 158 x 75 x 8.8 mm. Weight is more of any issue, with the Mix 2 carrying a hefty 208g that makes it the same as the new iPhone XS Max and heavier than the Samsung Galaxy Note 9.

Much of this will be due to the solid metal chassis and glass back that comprise the rest of the design. Sadly, the latter isn’t there to enable wireless charging, but the large 4080mAh battery does support fast charging through the micro-USB port.

Dual speaker grills on the bottom edge are mainly cosmetic, as only one of them has a speaker underneath, and while it can get loud the audio quality is only adequate.

On the top edge you’ll find a headphone jack, while the flanks are home to volume and power buttons, plus the dual-Nano SIM tray that also doubles as a microSD card holder.

The rear is home to the fingerprint sensor, dual-camera lenses and flash. There is a front facing camera, but it’s placed at the bottom of the display, requiring you to turn the device upside down to take a picture. This is a design we’ve seen before on other Chinese phones, the DooGee Mix springs to mind, but not one we’d like to see replicated too often.

An IP rating isn’t mentioned in the specifications at all, so this particular device should remain above water and away from spills.

Oukitel fits the Mix 2 with a decent level of power for this price point. A 2.3GHz Mediatek Helio P25 Octa-Core processor is the brains, with a generous 6GB of RAM and 64GB of storage (expandable by up to 256GB via microSD) completes the main compliment.

It’s a good performer in daily tasks, with apps opening swiftly and running smoothly, and light gaming is fluid, with titles such as Data Wing and Horizon all moving without frame rate issues or stutters.

A 5.99in panel with a resolution of 2160 x 1080 makes this a full HD display. There’s no SuperAMOLED here of course, and at this price that would be a huge surprise, but the LCD screen is bright, colourful and clear.

The dual-lenses on the rear are made up of a 21Mp+2Mp arrangement. This allows the Mix 2 to offer a range of modes that include Bokeh (with the background blurred), Beauty (like bad Photoshop smoothing), as well as the normal selection.

We found the cameras to be a huge disappointment though. Even the most neutral lighting caused images to be washed out, as you can clearly see below.

Areas of contrast, such as a moodily-lit shop window, left the Mix 2 utterly confused, and the Bokeh mode was fiddly.

Turning on the HDR feature only resulted in overexposed shots, and the Pro mode did make things a little better, but not so much as to reward the hassle.

We’re used to budget phones having sub-par cameras, but the pair on this device are very hard to recommend in any way.

Video footage can be shot up 4K (3840 x 2716), although focus hunting is obvious if the subject is moving or the scene is busy.

Selfies come via the 13Mp front facing camera, albeit with its strange placement, and results are good enough for social media.

As we mentioned earlier, the Mix 2 has a 4080mAh cell that supports fast charging. In our standard battery test it held its own for 8hrs and 7mins, which means that medium usage will see it have something left in the tank at the end of the day. Should you require a top-up, then the fast charging feature boosted our unit back up to 40 percent in just half an hour.

At the time of writing the Mix 2 languishes on Android 7.0, which is a bit of a shame. We’ve seen much cheaper models, such as the recently reviewed Umidigi A1 Pro, arrive replete with Android 8.1, and now that Android 9.0 is in the wild it only seems right to be at least on the heels of that version.

One highlight is the fact that the interface is stock Android, which means users get to avoid some of the more eccentric skins that we’ve come across over the years.

Should you buy the Oukitel Mix 2?

Reasonably fast performance and a decent display can’t make up for the dreadful cameras and dated aesthetics of the Mix 2. For around £200/$200 you can pick up better models, such as the Xiaomi Mi A2 or Honor 9 Lite, and we recommend that you do.