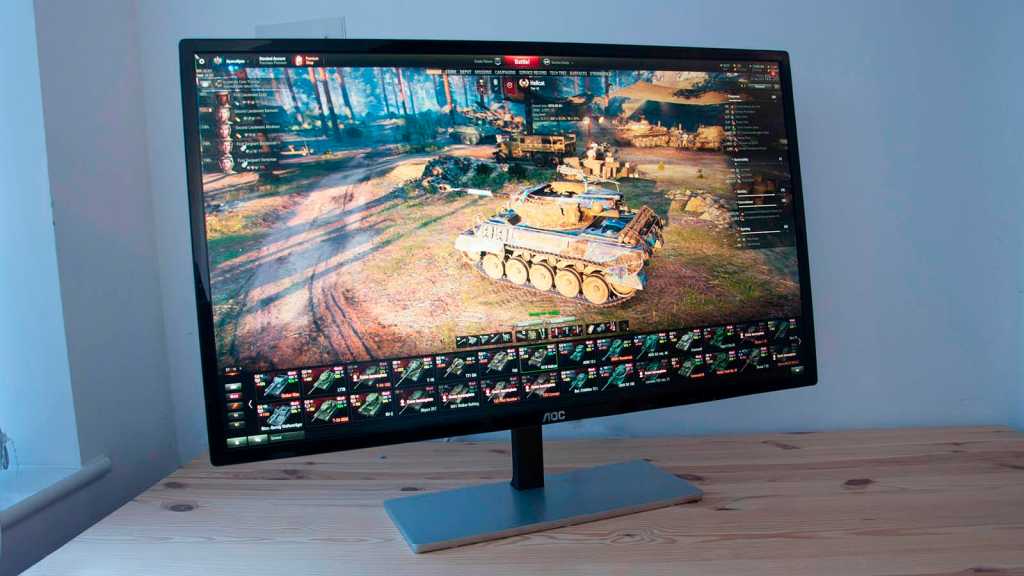 There is very little to dislike in this AOC design unless you want a VESA mountable panel. The Q3279VWFD8 provides a very solid platform for general use for the budget sensitive buyer, with excellent colour and contrast performance.

The era of the small screen, except on mobile devices, is behind us. Gaming monitors realistically start at 24in and now go up to previously TV scales, with 32in being ideal for most players.

The optimal resolution, unless you can afford the best GPU and CPU combination is Quad HD or 1440p (2560 x 1440), and high refresh rates would complete that dream specification. Just a year ago the cost of a monitor with those specifications, for gaming or serious use, would have cost much more than today.

And, a prime example of those changes is the new AOC Q3279VWFD8. A monitor that delivers the size, resolution and build quality gamers will want, but at a lower price than most might expect.

With a three year warranty included, the Q3279VWFD8 offers exceptional value for money.

Check out the best monitors you can buy in our chart as well as specific gaming monitors.

Not quite the full 32in, but acceptably close. The AOC Q3279VWFD8 at 31.5in diagonally creates an immersive experience when it’s only the depth of a typical table away from the viewer.

It comes out of the box in two parts; the screen and a polished aluminium skinned stand plate that can be easily attached without the need for tools. This support can tilt the screen between -2 and 21.5 degrees from the vertical, but it has no twist or rotational movement.

Sadly, there aren’t any VESA mounting holes, so this is how it will be forever more.

All the inputs are in an easily accessible line across the lower back, and AOC thankfully avoided any easily breakable plastic cover in this area.

The bottom section where the inputs reside is clearly where all the electronics live, as this part extends out marginally. The rest of the screen is very thin, being just 16mm front to back. And, this elegant aesthetic is continued through a 14mm frame border in all directions.

AOC likes the minimalist look, and the Q3279VWFD8 exudes their very clean design ethic to a tee.

Where a gamer might more be impressed is in the input selection. Because unless you’re trying to connect something like an original Nintendo SNES or a computer that’s equally ancient, this monitor has you covered.

HDMI, DVI, VGA and DisplayPort are all here, although HDMI is only version 1.4 and not the 2.0 release. That’s not much of a problem to be fair, as HDMI 1.4 can easily handle the Quad HD resolution and maximum 75Hz fresh rate.

Power is via the standard IEC type, and the power supply is encased avoiding the external box scenario. A headphone jack provides audio for those connecting via HDMI, as there are no speakers built-in.

The only feature of this design we don’t much care for is the buttons to access the OSM, five of them placed along the right rear edge of the frame, looking at the screen front-on.

They’re impossible to see, find, and don’t physically relate to the OSM, making them difficult to master. Even after a short period, we’d realised how a small joystick for menu navigation would have been a far superior option.

That point aside, this has all the hallmarks of a decent monitor for both gaming and more serious applications. It’s time to unleash the calibrator in its direction and see if the IPS panel lives up to the rest of this attractive design.

We connected the Q3279VWFD8 to our monitor test computer using the DisplayPort cable included in the box. AOC also bundles an HDMI cable that would have worked equally well for this exercise.

AOC quotes brightness of 250cd/m2, static contrast ratio of 1:1200 and sRGB coverage of 98 percent. And, it’s underselling the product on most of those factors.

A 100 percent brightness delivered 272cd/m2, and the sRGB is the full 100 percent. The static contrast was only 1:820 at highest brightness but hit the target 1:1200 ration at just below 50 percent of the highest level.

Overall, this display is much better than the price point might suggest in both colour representation and contrast.

The only wrinkle that our display analysis threw up is that the colour uniformity of brightness is a bit odd, with the bottom left being closest to DeltaE and the centre being the furthest away.

Not that this is easily seen by human eyes, but was identified by our Datacolor calibrator.

The AOC Q3279VWFD8 might not compete with Rec.709 specification monitors that cost three times as much, but for general home and business use, it is punching above its weight.