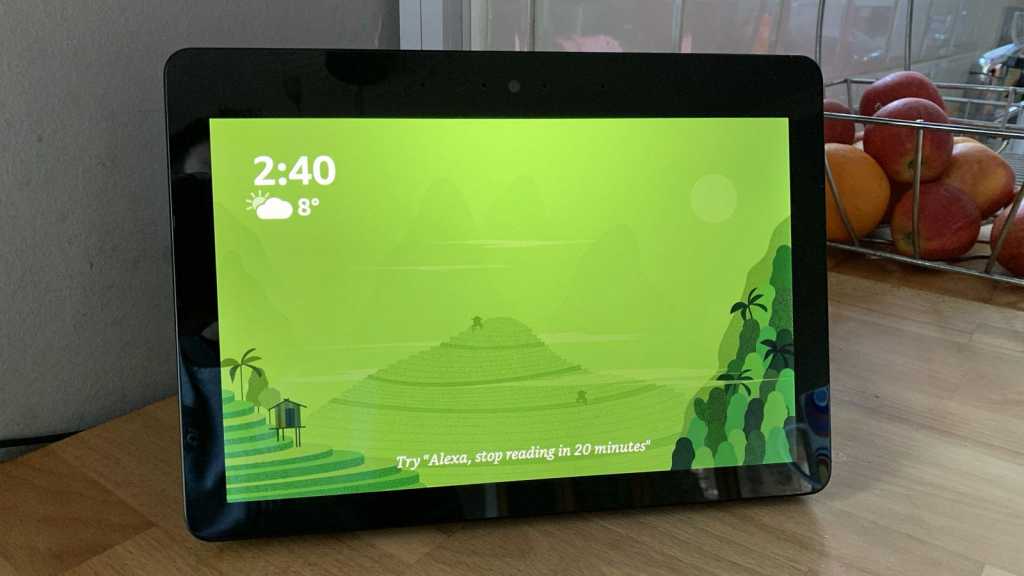 The new Echo Show improves on the original in just about every way. But, for us, it still doesn’t do enough – especially at this price – to make the screen an indispensable feature. Sound quality is a lot better than other Echos, but you can plug an Echo Dot into your own speakers for a fraction of the price.

The original Echo Show was the first smart display to feature Alexa and the Echo Spot, with a much smaller, circular screen came next.

But you now have a broader choice including this second-gen Show and the smaller, cheaper Echo Show 5.

With the Echo Show, Alexa doesn’t just talk to you. She also displays information on screen such as lyrics to a song, steps of a recipe, sports scores, weather forecasts, even videos from compatible security cameras and Amazon Video.

But it isn’t the same as an Amazon Fire tablet: you can’t install apps on it. You’re limited to Alexa’s capabilities which, admittedly, are quite broad. You can send messages to other Echo and Alexa app users, drop in on other compatible Echos for video calls and Skype your contact as well.

That’s the same price as the original Echo Show when it launched. That older device can be picked up very cheap now, and is still a good deal at these low prices.

You can quite a few other smart displays to choose between and we’ve rounded them up in this handy buyer’s guide.

Unlike Amazon’s usual ‘all-new’ design claims which mean there’s simply a faster processor inside, the Echo Show 2 really is a completely new design. In fact, the processor is just about the only thing that has stayed the same.

The most obvious change is the screen which is now 10in instead of 7in. Resolution is 1280×800 so video is 720p rather than 1080p, but it looks fine from normal viewing distances.

The screen is brighter (with a claimed maximum of 450 nits) and contrast and colours are also improved. Viewing angles could be a little better given that this is the sort of device that several family members will crowd around to video call grandparents and look at photos or video clips.

To avoid the unit being too big, the speakers have been moved to the rear where you’ll find plenty of fabric in either grey or an off-white colour. It’s a nice thought, but in most positions no-one will ever see it.

Sound quality has been beefed up quite a bit with excellent volume and plenty of bass. Usually we wouldn’t moan that there was too much bass, but at the out-of-box settings it’s a little too boomy. Fortunately the recently introduced EQ lets you adjust this to your liking.

The new Show isn’t in the same league as the Apple HomePod or Google Home Max, but that’s not too surprising at this price: both of those smart speakers cost a lot more and don’t have a display.

Amazon has added a Kensington lock slot – something few people are likely to use – and alongside it is a mains connector and a microUSB port. The latter can be used for an Ethernet adapter (not supplied) so the unit can be connected to your network using a wire instead of Wi-Fi.

Note that there’s no aux in our out, but you do get Bluetooth for streaming music from your phone or tablet.

Like the Echo Plus, there’s a built-in Zigbee hub which could save you from buying one for other smart gadgets, such as Philips Hue bridge. It can also remove the need to have these hubs plugged into your router if you already have them.

We can’t help but dislike the chunky bezels around the screen, especially the fat top one. This houses the 5Mp camera and four of the eight microphones; the other four are on the top edge.

You’ll find three buttons on top: two for volume and one to mute the mics and disable the camera.

A smart display is only smart if it can do what you want it to and here you might find a few issues.

First, there’s the thorny problem of YouTube. Even though the disagreements between Amazon and Google seem to be resolved, there is no official access to YouTube. That’s only for Amazon Fire TV devices – at least that’s what Amazon tells us.

So when you ask Alexa to search for videos you will not see any YouTube results. Instead you’ll get Vevo and Dailymotion.

Ask Alexa to open YouTube and you’ll see a choice of Silk or Firefox web browsers because visiting YouTube in a browser is the only way to watch. This workaround isn’t ideal because the interface is designed for laptops and PCs, not a 10in screen. It’s acceptable, but far from ideal, and far from the experience you’ll get with Google’s own Home Hub.

Next we have to mention the use of the display. Although you will see visuals for most questions or requests, we can’t help but feel the real-estate isn’t put to the best possible use. For example, when you are using any of the third-party skills the time disappears and you have to ask Alexa to “Go home” to see it.

Even if you’re listening to a radio station via TuneIn there’s no clock and the screen displays only basic information. That isn’t entirely Amazon’s fault, but it could surely have an overlay with the usual information from the homescreen at the top of every skill.

What is useful is the smart home control. Swipe down from the top and you’ll see a settings menu with a Lights & more button. This displays a list of all your (compatible) smart home gadgets including switches, lights and sensors.

However, even here we’ve cause for complaint. Next to each device are ON and OFF buttons. But pressing one gives no feedback, except when the device isn’t responding. It means you can’t see at a glance the status of those devices: they may already be on, but you’ve no way of knowing.

Another useful feature is the ability to ask Alexa to show camera feeds. Again, this is great if your cameras are compatible, but useless if not. Currently, these brands have compatible cameras in their ranges: Ring, Arlo, Nest, August, EZViz, Vivint, Amcrest, Logitech.

As this isn’t a tablet, you can’t install apps such as Netflix and iPlayer and watch shows from these services. You can, of course, watch video from Amazon’s Video streaming service.

Really, though, the Echo Show isn’t designed for watching hour-long shows. It’s also unlikely you’ll place it where you can sit and comfortably view it for that long, so it’s best for video chats, short YouTube clips and for checking your security cameras.

We put the Show on a breakfast bar and found the screen proved too distracting for kids, so we ended up having to switch it off at meal times. It would be great if Amazon had included a button to turn off the screen temporarily, but there’s no way to do this short of pulling out the power cable or turning off the switch at the wall.

What you can do is to press the mic mute button which turns the screen black after a couple of minutes and puts a red line at the bottom so you remember it’s muted.

The Drop In feature, which allows you to quickly start a video call with another Echo Show or Echo Spot user works well but chances are there aren’t many people you can call. That’s why it’s a huge bonus that Skype is coming to the Echo Show soon.

Some songs in Amazon Music have lyrics which are highlighted in sync with the track, so it functions a little like a Karaoke machine. But as with so many other features, it’s a nice-to-have but not an essential feature.

Naturally, as with any other Echo device, Alexa has the same core set of features which you’ll find in our guide to using Alexa.

Adding a display to an Echo doesn’t add all that much to Alexa’s core skills. But we already knew that from the original Echo Show. If you have compatible security cameras, or really like the lyrics feature, then you’ll probably like the new model.

It has a bigger screen than Google’s Home Hub and better sound quality, but it’s hard to justify the extra expense: the Show is £80 / US$80 more expensive. And thanks to proper support for YouTube and other Google services, it’s likely to be the better device unless you want to use it for video calling because it doesn’t have a camera.

And if you like the idea of having a camera but not the high price, check out the much more affordable Echo Show 5.