With 8th-gen Intel processors, all Surface Pro 6 models see decent performance but it’s hard to find any other changes from the previous two generations. That’s not a bad thing, and it’s still a good buy if you’re after a Windows 10 tablet that also works as a laptop, but if you can afford it consider the more recent Pro 7, which jumps to 10th gen  chips and adds USB-C.

We could kick off this review by complaining that Microsoft hasn’t changed the design of the Surface Pro 6 and that it’s basically just the same as before with an upgraded processor and the addition of a black finish to the colour options.

And that would be entirely fair.

We could moan that there’s no Type C USB port or Thunderbolt and that it lacks innovation. But as the old saying goes, if it ain’t broke, don’t fix it.

That’s clearly Microsoft’s plan here, and aside from the fact that it would be convenient to have a USB-C port or two, the Surface Pro 6 remains one of the best Windows 10 tablets.

Upon launch, Microsoft’s pricing was relatively consistent with previous generations, starting at £879/US$899. However, now that the Surface Pro 7 has been unveiled, it’s been reduced.

Prices now start at £747/ US$699 for the Core i5 model with 8GB of RAM and 128GB of storage. Note that you can’t have a black version of the entry-level model: this is reserved for versions with at least 256GB of storage.

Keep in mind that the i5 model is also available from Amazon and Currys PC World, both of which are cheaper than Microsoft’s site at the time of writing. Microsoft are currently selling the i5 version as its baseline model, but you can find the M3 variant cheaper via John Lewis.

Prices rise sharply when you move to a Core i7 with 16GB of RAM and bump storage to 512GB. You can see the full range here.

Note that we’re reviewing the consumer version: there’s a business model which comes with Windows 10 Pro instead of Home and costs £410/ US$150 more for the equivalent configuration.

It might therefore be worth the jump to its successor, available from October 22 and starting at £799/US$749.

Given that nothing changed externally from the previous generation, it’s ironic that Microsoft decided to advertise the ‘6 with the line ‘Stand out from the ordinary’. To the casual observer, there’s nothing to identify the new model from the old ones. Even the ‘new’ black finish isn’t new, as the first two generations came in black. It just had a four-year hiatus.

Despite the matt finish, it still picks up finger oils and other marks. We purposely didn’t clean it for the shot below to illustrate this point. 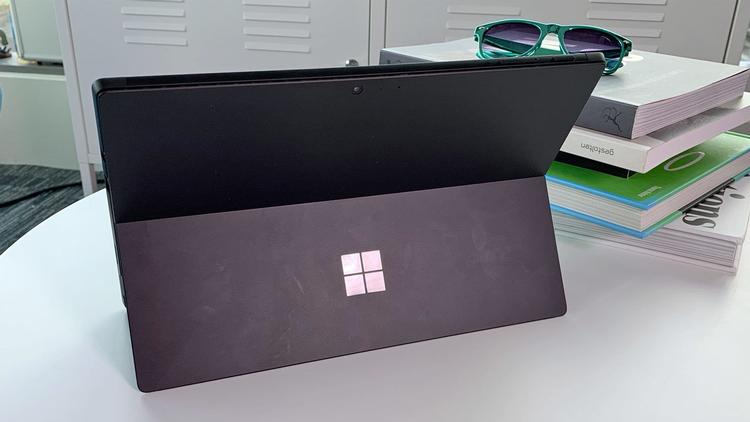 If you’re considering buying your first Surface Pro, it’s important to know that everything is optional: neither a keyboard nor stylus is included in the box. And since the costs of these aren’t insignificant (even the ‘cheap’ Type Cover is £124.99 / US$129.99) you should factor this in when choosing a model and looking at the competition.

As ever, there’s a 12.3in screen with a 3:2 aspect ratio and a resolution of 2736×1824 pixels. It’s a great display with excellent colour accuracy, brightness and viewing angles. There’s still no getting away from reflections with the glass cover, though, as the near-400 nits maximum brightness isn’t enough to ward them away.

Round the back is a kickstand which can be adjusted to any angle you like, even if you need the tablet to be laying almost horizontal against the desk. 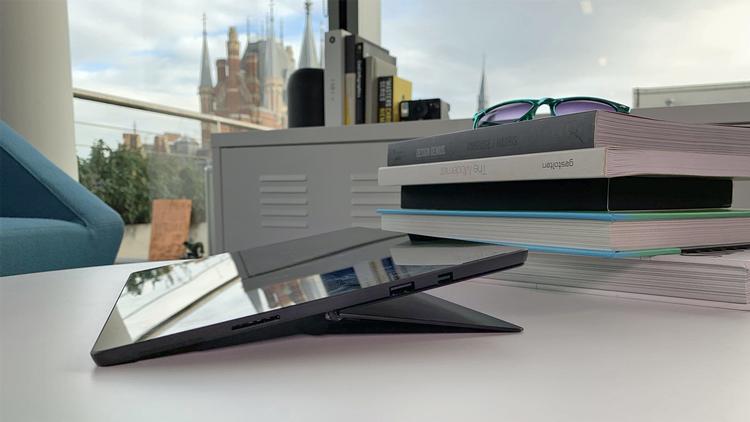 Opening the stand reveals the microSD card reader, but all other ports are found around the edges. On the right is a proprietary Surface Connector for charging, with USB 3 and mini-DisplayPort above and power and a volume rocker on top.

The left side is blank save for the headphone port near the top and, although we can whinge again about the fact that connectivity isn’t up to date and that you get USB-C on the Surface Go, at least Microsoft – unlike Google – hasn’t ditched the 3.5mm minijack connector… yet.

Cameras are unchanged, with a 5Mp front camera that supports Windows Hello for face recognition and auto-login, and an 8Mp rear camera that can shoot HDR photos. Both record 1080p video, but you’re mostly going to appreciate this on the front camera for video calls. Or if not you, recipients will. 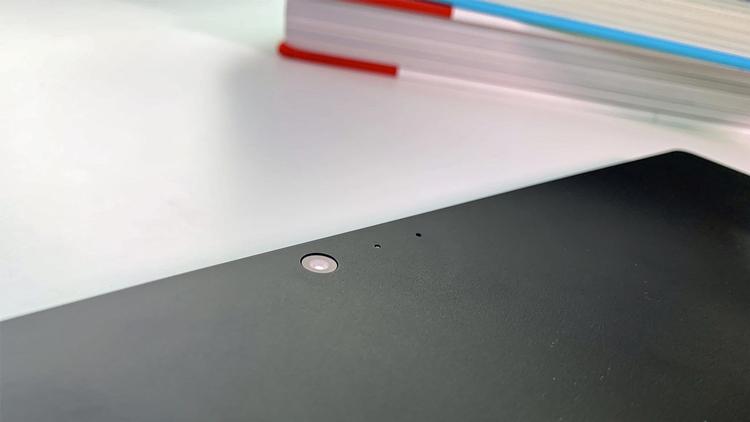 Speakers are almost invisible in the front bezels (which remain pretty chunky) and produce a sound that’s about as thin as the tablet itself.

It’s on the inside that you’ll find the biggest changes. We were sent the fanless Core i5 model to review, but if you need more power, the Core i7 does require a spinning cooler. Internally, cooling has been improved on all models, and although the chassis of even the Core i5 heats up a bit when being pushed hard, it isn’t uncomfortable and it dissipates quickly when the number crunching stops.

The 8th-gen chips add a good dose of extra performance because they’re quad-core with Hyper-threading which means eight threads can be processed simultaneously instead of four as with the previous models.

However, while CPU performance increases, GPU grunt decreases because the Iris Pro graphics have been replaced by run-of-the-mill Intel HD 620. This could have an impact if you need to run apps which rely on GPU power but for most people, it’s unlikely to have any discernible effect.

In Cinebench, we saw a multithreaded score of 576 from the Surface Pro 6 which compares well to the Core i7-equipped Surface Pro 2017, which could only manage 392. This is a raw test of computing power where more threads (usually) always win, so that’s no big surprise. 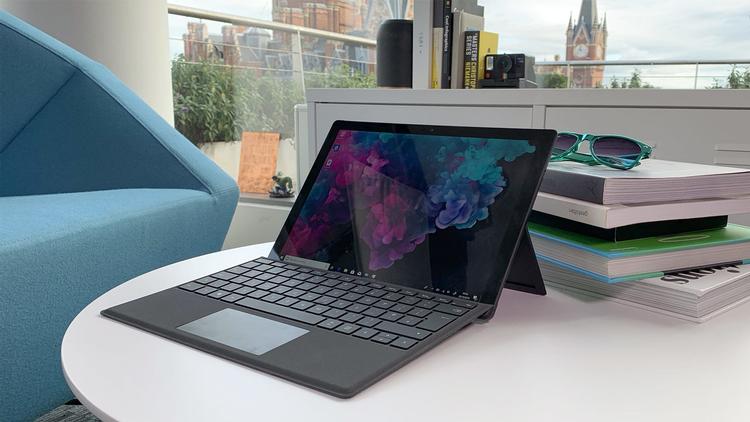 It’s a little less than a 50 percent increase, which means Microsoft’s claim of a 65 percent improvement is with the old Core m chip, which isn’t available with the Pro 6.

And when you factor 3D power into the mix as is done in the Creative test within PCMark, we saw an even tinier overall improvement with 3253 vs 3209. It isn’t slower because the score is a combination of several individual tests, but for pure 3D work, it is slower.

A gaming machine this is not; it’s aimed at productivity work and this means battery life is important.

In our tests the Surface Pro 6 lasted for a fraction over 8.5 hours. That isn’t a whole lot longer than the Surface Pro 2017, but considering the batteries are the same capacity in both models, it proves that the 8th-gen processors are more power efficient to the tune of about 10 percent.

This isn’t the best battery life you can get, of course, so if your working days last longer than this you might prefer a Surface Laptop or HP Spectre x360, both of which will almost last 13 hours.

Unless you’ll be connecting to a corporate domain, this shouldn’t make a shred of difference. But it does make the pricing seem wonky. In the UK at least, Surface Pro 6 models cost the same as the Surface Pro 2017, like for like, so you could argue that you’re not getting better value for money as Windows 10 Pro costs £100 more for each configuration when you buy a Surface Pro 6 for Business model.

Effectively, then, its corporate buyers which are getting the worse deal and consumers are no better or worse off than in 2017.

The Surface Pro 6 is a familiar refresh, with few changes of note besides an upgrade to Intel’s 8th generation processor.

This certainly provides a good performance boost, making the cheaper models a more viable choice. It’s a shame there are still no bundle deals for the Type Cover as a keyboard is really an essential accessory for virtually everyone who buys a Surface Pro.

But while this is effectively more of the same, the Surface Pro 6 remains an excellent choice if this is the type of PC you want. Most rivals can’t compete with its battery life, but it’s possible to get longer from some 2-in-1 laptops.

However, if your budget stretches slightly it might make sense to go for 2019’s Surface Pro 7 instead, which adds USB-C and starts at £799/$749.