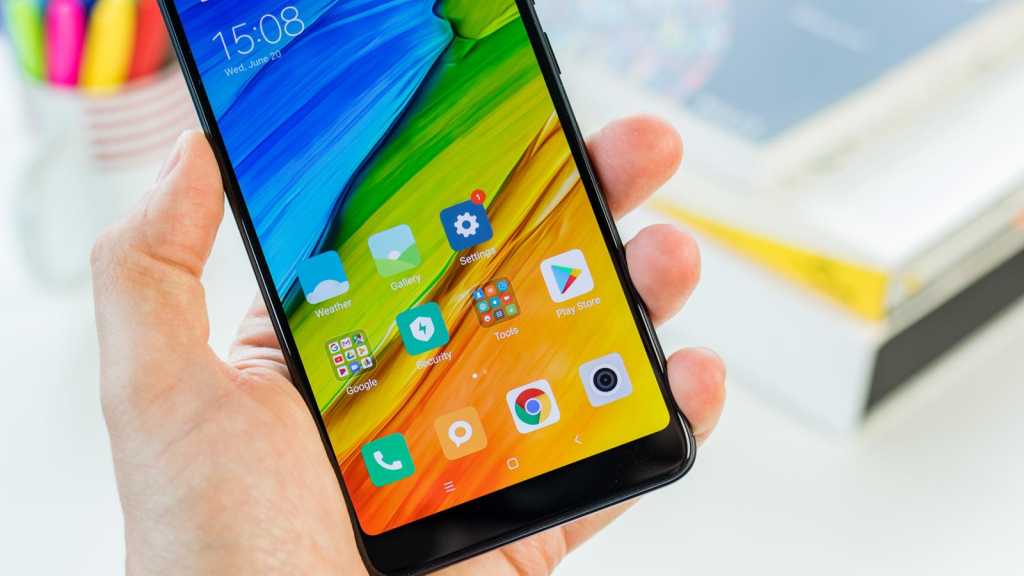 A big screen and a low price are paired with decent battery life, usable performance and an enhanced dual-camera in the Redmi Note 5. There are some drawbacks, such as the old Micro-USB port, lack of Quick Charge support and partly plastic build, but in other respects budget phones don’t come much better than this.

If you’re looking for a sub-£200 Android phone with a decent-size screen, good battery life and usable all-round performance and features, this could be it. Very similar to the Mi Max 3, but with a smaller 5.99in display, the Redmi Note 5 is a worthy upgrade over the Note 4 with improved performance, photography and design.

Since we originally wrote this review Xiaomi has entered the UK smartphone market, making it much easier to obtain its smartphones here. The Redmi Note 5 is now available from the likes of Amazon for £229.

Previously we’ve had to import review samples from China, and this Redmi Note 5 was supplied by GearBest, where current pricing is £182.39. When there’s no Cyber Monday sale on at Amazon this makes it the cheaper deal, but know that when importing from China to the UK you are liable for import duty, charged at 20 percent of the value printed on the shipping paperwork.

This is the Global version of the Redmi Note 5, which comes with all Google services preinstalled along with MIUI 9. It supports all 4G LTE bands used in the UK, too, which can be a problem with some Chinese handsets.

The Redmi Note 5 available in India has a single-lens camera at the rear and some lower-spec hardware, including the Snapdragon 625 processor. It has the new 18:9 5.99in display, but in other respects is not a huge departure from the Redmi Note 4. And that explains why some reviews of the Redmi Note 5 are less complimentary than others.

Also available in India is the Redmi Note 5 Pro, and that’s (almost) the phone you see here rebranded as the Redmi Note 5. It has a dual-lens camera at the rear and runs the Snapdragon 636.

But in India the Pro also has a 20Mp selfie camera and up to 6GB of RAM, while this Global version’s front camera is rated at 13Mp and has either 3- or 4GB of memory.

If you’re worried about purchasing the wrong version of the phone then fear not – we couldn’t even find the Indian models for sale in the UK. But we’d recommend double-checking the spec before you buy. Better yet, just click this link.

There are some key design changes in the Redmi Note 5 over its predecessor, but also a return to the Redmi Note 3’s part plastic build – the antenna lines at the rear of the Note 4 have been replaced with plastic end caps – and 4000mAh battery, which is still pretty generous, but 100mAh down on Redmi Note 4.

More impressive is the new 5.99in Full-HD+ IPS display, not only larger than the 5.5in previous example but also taller, adopting the 18:9 aspect ratio that has become fashionable in today’s market. It helps the phone look more on-trend, and also allows for a larger screen without infringing on usability – the Note 5 is only 7mm taller than its predecessor, and fractionally narrower and slimmer.

The phone’s chin has also been reduced, with navigational buttons now appearing onscreen. And an update to MIUI 10 is available, which gives you the option to use swipe gestures to go home or back, removing these buttons from the display.

There are some tweaks found along the edges, too. While the Redmi Note 5 still features a mono speaker, it no longer attempts to hide this fact with a set of drilled holes lying either side of its Micro-USB port. Instead you’ll find just one, and on the other side the headphone jack has moved down from its previous position at the top of the device.

The rear-mounted fingerprint sensor has not moved, but where the single-lens camera previously sat above it Xiaomi has now added a second lens and moved this to a new position at top-left. It did lie flush; now it juts out a tad.

And naturally there have been hardware changes, which result in a boost to performance. Gone is the deca-core Helio X20 chip with Mali T880 graphics, and in comes the Snapdragon 636 with Adreno 509. There’s a new 4GB RAM, 64GB storage model, too (that’s what we’re reviewing here).

Despite the aforementioned sprinkling of plastic parts, Redmi Note 5 is a very good-looking phone at this price. Moreover, it feels sturdy, and very well-made.

The new screen and taller aspect ratio is a blessing for usability, and though it’s still a bit of a stretch for your thumb to reach the top corner it is operable in a single hand – especially when you take advantage of one-handed mode, which shrinks the display area.

It’s an IPS panel, which bodes well for quality, with realistic colours and good viewing angles. We can’t find any official reference to the Note 5 using Gorilla Glass protection, but thanks to a metal rear it is only the one side of this smartphone you need to keep safe. You’ll also find a silicone case in the box, which is handy.

We measured the maximum screen brightness at 427cd/m2, which is very good for a sub-£200 phone. Being able to ramp up the brightness so high also makes the screen easier to see outdoors.

The display has a full-HD+ resolution of 2160×1080, which results in a pixel density of 403ppi. It’s sufficiently clear, and also no higher in resolution than even Xiaomi’s flagship phones.

We’re disappointed to see an old Micro-USB port at the bottom, especially given that it won’t charge any faster than at 10W. There is a charger supplied in the box, but it has a two-pin EU plug, so if you’re purchasing this phone in the UK you’ll need to supply your own adaptor.

Naturally at this price there’s no support for wireless charging, which has so far been seen only on the Mi Mix 2S.

On the up side, Xiaomi has retained the IR blaster on the Note 5’s top edge. It’s incredibly rare to find such a feature in phones these days.

There’s also the fingerprint scanner at the rear, which works well – but if you’re interested in mobile payments be aware there’s no support for NFC.

Connectivity is otherwise pretty good, with dual-band 802.11ac Wi-Fi, Bluetooth 5.0, GPS and GLONASS, and a hybrid SIM slot that can either accept a single SIM and a microSD card for storage expansion or two SIMs that work in dual-standby mode.

Powering the show here is a Qualcomm Snapdragon 636 chip clocked at 1.8GHz, with integrated Adreno 509 graphics. It’s paired with 4GB of memory.

That’s the same setup as in the Mi Max 3, and as you’ll see in our chart below performance is on par.

As we said for that phone, the Redmi Note 5 is not a speed demon. However, it offers usable performance for most users for daily tasks, and we didn’t spot any sign of lag when navigating the interface and launching apps.

You can play casual games and watch movies, provided you don’t throw anything too intensive at it.

Battery life is very good, and you’ll easily get at least a full day’s life from the 4000mAh cell – maybe more, depending on your usage.

In Geekbench 4’s battery test it scored 5390 points, and kept churning through its task list for 8 hours 59 minutes.

It might sound like a similar setup as found on the Mi Max 3, but the Redmi Note 5’s camera is inferior with no AI mode. It also maxes out at 1080p video recording.

Still, it’s an improvement on the Redmi Note 4’s 13Mp rear camera and 5Mp selfie camera. This new model has a 12Mp + 5Mp dual-lens camera at the rear, with dual phase-detection dual-focus and 1.4um pixels. At the front is a 13Mp selfie camera.

Aside from the missing AI button at the top, the camera app looks the same as on any other Xiaomi phone, with options to turn on/off/auto the flash and HDR mode, and to select real-time filters. At the bottom you swipe between video (and short video), photo, portrait, square, panorama and manual shooting modes.

Portrait mode is what’s used to create those funky blurred background shots that help your subject to stand out, aided by the second camera lens.

Overall we were very impressed with the quality of our test shots (below in Auto and HDR modes). Those pictured below appear a little dark, though it was an overcast day when they were shot. They show plenty of detail but are perhaps a little over-sharpened.

In low-light the Redmi Note 5 did a fantastic job. There is some noise but overall blacks are well rendered, text is largely fuzz-free, and the scene is adequately lit without requiring aid from the flash.

The Redmi Note 5 runs MIUI 9 out of the box but an upgrade is available to MIUI 10. This is still based on Android Oreo rather than the more recent Android Pie (which will be coming in time), but includes some nice new features such as full-display gesture support, a redesigned quick access panel and volume controls, plus the addition of Picture in Picture and Autofill.

It won’t be immediately recognisable as Android if you’ve not picked up a Xiaomi phone before, and the lack of an app tray means the shortcuts all spill out over the home screens (but can be tidied into folders). The Settings menu also looks completely different, and there are some Xiaomi-specific apps here too.

Because this is the Global ROM version of the Redmi Note 5 it is preinstalled with Google services; were you to buy the Chinese ROM version you would need to install these yourself from the Mi App Store. That’s because Google services are not used in China.

Other things we like about MIUI include the aforementioned One-handed mode, plus Second Space and Dual Apps.

It’s not infallible, but the Redmi Note 5 is a great all-rounder and will be hard to beat under £200. It benefits from a very good and well-sized screen, and has a decent camera and usable performance.