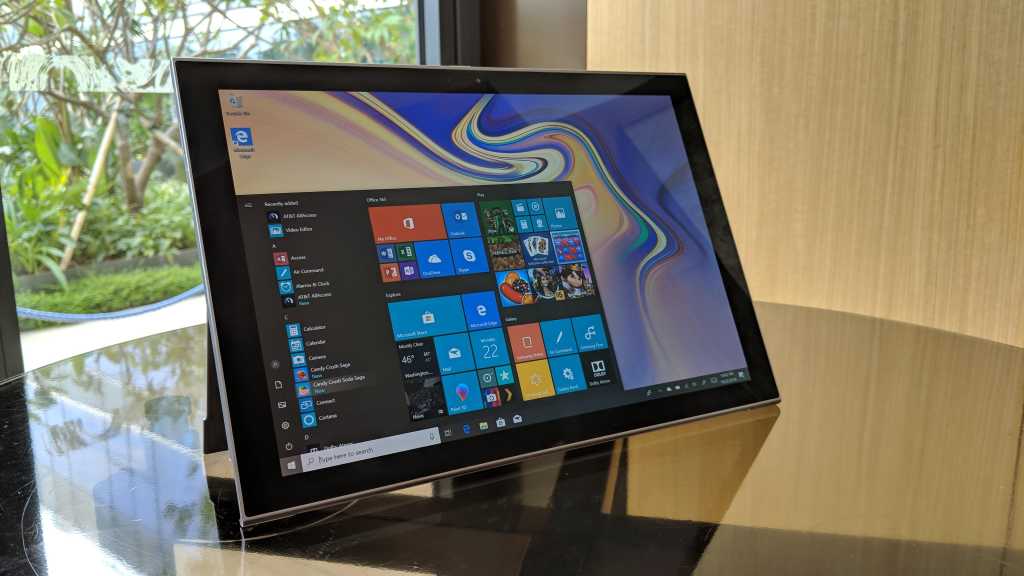 Samsung has seriously upgraded the Galaxy Book’s aesthetic in this sequel, and the switch to Snapdragon should make it much more appealing to anyone who needs to be able to work on the go. The lightweight design makes it even better for travelling, even with the new metal construction. The only question mark is really performance. We haven’t properly tested any Snapdragon 850 laptop yet, but the 835 series suffered under heavy load, and with only 4GB of RAM the Galaxy Book 2 is unlikely to prove a powerhouse.

We liked but didn’t love the first Galaxy Book when it launched in late 2017, but with the Galaxy Book 2 Samsung has made some promising changes – not least the switch to a 4G Qualcomm chipset – that have us excited for the follow-up.

Luckily for us, Qualcomm gave us the chance to take a look at the new always-connected PC, so here’s what we think.

The Galaxy Book 2 is due to come out in the US on 2 November, where it will cost $999 – though depending on how you buy it, you may have to pay extra for data. At launch it will be available online from AT&T, Microsoft and Samsung, though it should also make it into physical AT&T, Verizon and Sprint stores later that month.

As for the UK, we don’t really know yet. Samsung hasn’t announced when – or even if – the device will reach the UK market, so stay tuned for more info.

By far the biggest and most important change in the new Galaxy Book is something that you can’t spot just from looking at it.

After using an Intel Core i5 processor in last year’s model, Samsung has switched things up and replaced the Intel chip with a Snapdragon 850, the latest Windows processor from Qualcomm, a company best known for its mobile phone processors.

That makes the Galaxy Book 2 the second device announced that uses the 850, along with the Lenovo C630, joining the three devices – from HP, Lenovo, and Acer – that used the previous Snapdragon 835.

A new processor might not sound too exciting a change, but it offers two key features. First up, the Galaxy Book 2 will be capable of connecting to 4G LTE internet – just like your phone – meaning you can work online or stream video without worrying about finding a Wi-Fi connection.

Second, Qualcomm’s processors are much more power efficient than Intel’s, and so Samsung says that the Galaxy Book 2 will keep running for up to 20 hours of continuous use – in line with figures we’ve seen from previous Windows on Snapdragon devices, which managed as much as 22 hours in our battery testing.

There is a downside though, and the previous Snapdragon 835 devices suffered noticeably slower performance than equivalently priced Intel rivals – something we’re expecting to see continued with the 850. With only 4GB of RAM and 128GB of storage to go with it, we’re worried the Galaxy Book 2 could slow if you try anything trickier than checking your emails.

We haven’t been able to test any of this properly, but we’ll be sure to put it through its paces when we get a device in for a full review.

One of our biggest criticisms of the original Galaxy Book was its plastic construction, which robbed the device of the premium feel you’d expect at the hefty price point.

Luckily it appears Samsung was listening, and the Galaxy Book 2 boasts a much slicker metal frame, which feels premium and surprisingly sturdy for the weight – a relatively back-friendly 839g.

It helps that it’s slim – just 7.9mm thick – and that the detachable magnetic keyboard is a lightweight plastic offering that avoids weighing the device down too much. Oh, and that keyboard is included with the device, along with an S Pen – another nice touch from Samsung.

Another tweak to the design comes in the new rear kickstand – also made out of metal – which hinges off the main body to allow you to prop the tablet/laptop hybrid up at a variety of angles. Building this into the body means it feels much tougher and steadier than the flimsy folding covers most similar devices use – another little detail that should help justify that $999 price tag.

While the previous device came in two sizes, this is limited to the larger 12in display option, which at 2160×1440 offers a bright, crisp AMOLED screen.

Audio comes packing Dolby Atmos support, with speakers tuned by AKG, so sound should be solid. As for ports, you get two USB-C slots (one of which is used for charging), along with microSD, a 3.5mm headphone jack, and a fingerprint sensor. Then there’s an 8MP camera on the rear, and 5MP on the front for Skype and selfies.

Finally, a word on software: as with the other Snapdragon devices, this ships with Windows 10S, but has a free optional upgrade to Windows 10 Pro. Both have pros and cons – 10S limits you to apps from the Windows app store, cutting out a lot of the PC ecosystem. Upgrading to Pro can introduce compatibility issues though, as not all software seems to play nice with Qualcomm’s chips, and might slightly reduce the mammoth battery life.

Samsung has seriously upgraded the Galaxy Book’s aesthetic in this sequel, and the switch to Snapdragon should make it much more appealing to anyone who needs to be able to work on the go. The lightweight design makes it even better for travelling, even with the new metal construction.

The only question mark is really performance. We haven’t properly tested any Snapdragon 850 laptop yet, but the 835 series suffered under heavy load, and with only 4GB of RAM the Galaxy Book 2 is unlikely to prove a powerhouse.