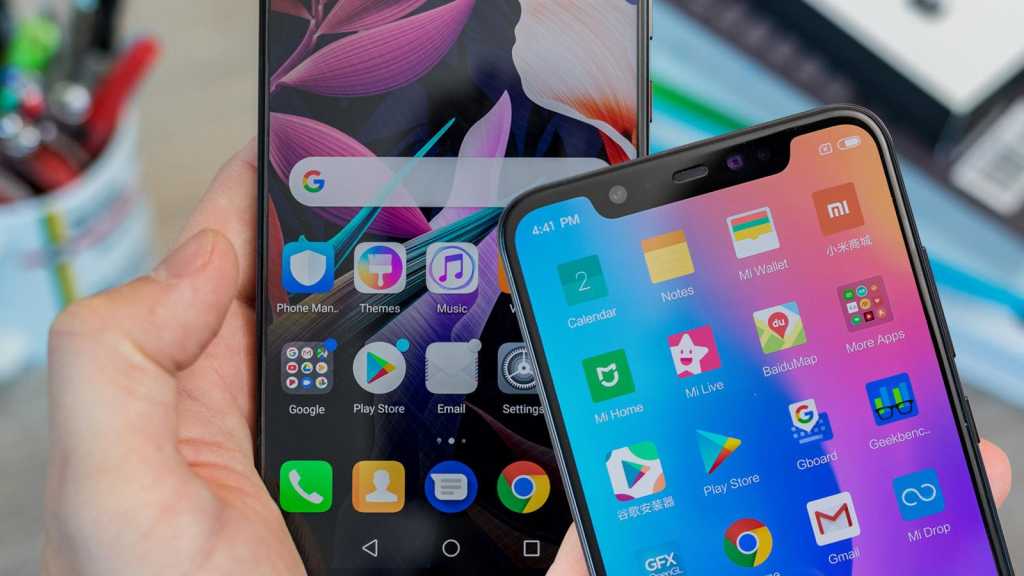 Any idiot can see that the £899 Huawei Mate 20 Pro is the superior phone in this comparison, but when you consider that the Mi 8 is available from £300 the choice becomes much less clear. If you can do without the higher-resolution screen, third camera lens, waterproofing and fancy charging features of the Mate 20 Pro then the Mi 8 offers excellent value – especially if you can stretch to the Pro or Explorer Edition for its in-display fingerprint sensor.

Huawei’s Mate 20 family and the Xiaomi Mi 8 line-up are two of the most exciting phone launches to come out of China in the past few months. In this article we’ll look at the key differences from a UK buyer’s point of view, and help you to work out which phone is more deserving of your hard-earned cash.

Xiaomi’s Mi 8 was announced in July alongside the Mi 8 SE and Mi 8 Explorer Edition. The latter was a limited-edition version of the phone with 3D Face ID, an in-display fingerprint sensor and a (really cool) transparent rear cover. High demand in China means it has since been supplemented by the Mi 8 Pro (in essence the same thing but with an IR camera for face detection). Also see:  Best Xiaomi Deals

None of these phones are officially available in the UK ( yet), though you can purchase them through the likes of GearBest. You’ll pay a little more than the RRP through GearBest, and should also factor in that you may be asked to pay import duty (20% of the value printed on the shipping paperwork).

The Explorer Edition is also available from GearBest at £564.29 ($729.99/638.75€), while UK pricing for the Pro has not yet been confirmed but is expected to be a little cheaper than the Explorer Edition (pre-order here in Gold or Black).

The Mate 20 Pro was announced at an event in London on 16 October, and is available to pre-order from EE, Vodafone, Sky Mobile, O2 and Carphone Warehouse ahead of its 26 October release date at £899 (1049€).

However, neither Huawei phone will be available in the US, and it’s looking as though the standard Mate 20 will not come to the UK either.

Even with the possibility of import duty, even the Xiaomi Mi 8 Explorer Edition is significantly cheaper than the Huawei Mate 20 Pro. One reason for this is that Xiaomi never makes more than 5% profit on any of its hardware, with its revenue instead obtained through services delivered via apps, primarily in China and India.

However, the Mate 20 Pro is going to be quicker and easier to get hold of if you can afford it, and also bests the Mi 8 on spec – even the Explorer Edition isn’t as impressive as the Huawei on paper. So your decision may come down to whether the extra features are worth the extra money for you, and how you feel about importing a phone from China.

All versions of the Mi 8 use the top-end Snapdragon 845 processor, which is paired with 6- or 8GB of RAM, while Huawei uses its own Kirin 980 chip with 4- or 6GB of RAM. Both are octa-core processors, though the Snapdragon is built on the second-gen 10nm process, and the Kirin on the 7nm process.

It’s safe to say you will not be disappointed by either phone’s performance and, actually, in real-world usage you’re unlikely to be able to tell the difference between the two. We got to the point where flagship phones were fast enough for most users a long time ago.

The Mi 8 came out on top in gaming benchmarks, most likely due to its lower-resolution screen, but we’re not publishing any figures until we have the final version of the EMUI software for the Mate 20 Pro. This is because it also came out slower than the Mate 10 Pro, which makes little sense.

Storage is similar, with both phones available in 128GB capacity, but whereas the Mate 20 Pro can accept a microSD card up to 256GB in capacity the Mi 8 does not. It does, however, have a 256GB internal storage option.

Four of the five phones we mention here have Full-HD+ displays, and only the Mate 20 Pro has a 2K display. We won’t pretend there isn’t a difference in clarity, but you should note that the Xiaomi phones have very good screens even with their lower resolutions. Xiaomi has never gone higher than Full-HD+ in any of its devices, most likely due to the cost.

The Mi 8, Mi 8 Pro and Explorer Edition all use SuperAMOLED panels, which is our favourite type of screen tech for its vibrant and punchy colours, and rich contrast. The Mate 20 Pro also uses an OLED (without the Super) display, while the standard Mate 20 has an LCD panel.

All five have a notch display, but it is much wider on the Mate 20 Pro and Xiaomi models than on the standard Mate 20, which has a smaller ‘dewdrop’ notch.

Huawei flagships are becoming known for their triple camera setups, with the standard Mate 20 rocking 16Mp, 12Mp and 8Mp lenses, and the Mate 20 Pro 40Mp, 20Mp and 8Mp. By comparison the Xiaomi phones have two lenses at the rear, both rated at 12Mp.

In Xiaomi’s case the purpose of all the extra lens is to create the popular ‘bokeh’ effect, whereby the background is blurred to make a subject stand out. Huawei’s offers one telephoto lens and one ultra-wide-angle.

All five phones have AI cameras, allowing them to intelligently choose a preset scene mode so you can shoot the perfect picture without giving it too much thought.

The in-display fingerprint sensor is the hot new trend for 2018, and a feature you’ll find only on the top models from either camp.

Both the standard Mi 8 and Huawei Mate 20 feature rear-mounted fingerprint sensors, so if you want the fancy new tech you’ll need the Mi 8 Pro/Explorer Edition or Mate 20 Pro.

Something we’re surprised to see Xiaomi has not yet added to its flagship is wireless charging (especially after it was introduced to the Mi Mix 2S earlier this year, and will almost certainly appear in the Mi Mix 3 that will be announced on Thursday). The Mate 20 Pro is the only phone in this comparison that supports wireless charging, and it also has a 15W reverse-charging feature that can recharge another phone.

In reality we see few people being generous enough to spare some of their phone’s charge to rescue a friend’s failing battery. But it’s a feature worth mentioning. And given the larger batteries on the Huawei’s (4000mAh for the Mate 20 and 4200mAh for the Pro), you’d probably be more willing to do so than if said feature was available for the Mi 8 (3,400mAh standard model, 3000mAh Pro/Explorer).

All these phones support fast charging, with Xiaomi’s devices supporting Quick Charge 4.0 but Huawei trumping this with SuperCharge. For the Pro it can deliver up to 40W, or 22.5W for the standard Mate 20.

In compensation for the less impressive battery tech the Xiaomi phones are smaller and lighter, making them more easily manageable in the hand. Of course, their screens are also a tad smaller, with a taller aspect ratio, which helps in this regard.

3D-sensing front cameras is another feature also found only in the top models, the Mate 20 Pro and Mi 8 Explorer Edition. The other phones here have face recognition, but use a less secure and less accurate infra-red camera.

Another feature the Mi 8 lacks – at least when compared to the Mate 20 Pro – is waterproofing. Xiaomi won’t add waterproofing to its phones because it adds too much expense to the devices, and its effectiveness can also deteriorate over time. Meanwhile Huawei’s Mate 20 Pro is rated IP68, while the standard Mate 20 is splashproof.

The 3.5mm audio jack is increasingly a thing of the past as smartphone makers move to USB-C, and typically provide an adaptor for this in the box. The standard Mate 20 is notable then for its inclusion of this port.

Neither phone runs pure Android, but Huawei’s EMUI 9 is at least based on the latest version of Android, Pie. MIUI 9, meanwhile, is a custom version of Android Oreo. Android Pie will be delivered in a future update to MIUI, and MIUI 10 will also roll out soon.

The Mate 20 and Mate 20 Pro will come with all Google services preinstalled out of the box, but you’ll get this on the Mi 8 only if you opt for the Global ROM version. If you do end up with a Chinese model you can add Google Play services via the Mi App Store, but the integration is not as seamless.

There’s no doubt about it, based on specifications alone the Mate 20 Pro is superior to the Mi 8 family, but we’d pick the Mi 8 over the standard Mate 20 any day. And the £600 difference between standard Mi 8 and Mate 20 Pro might just change your mind on which offers the better value.