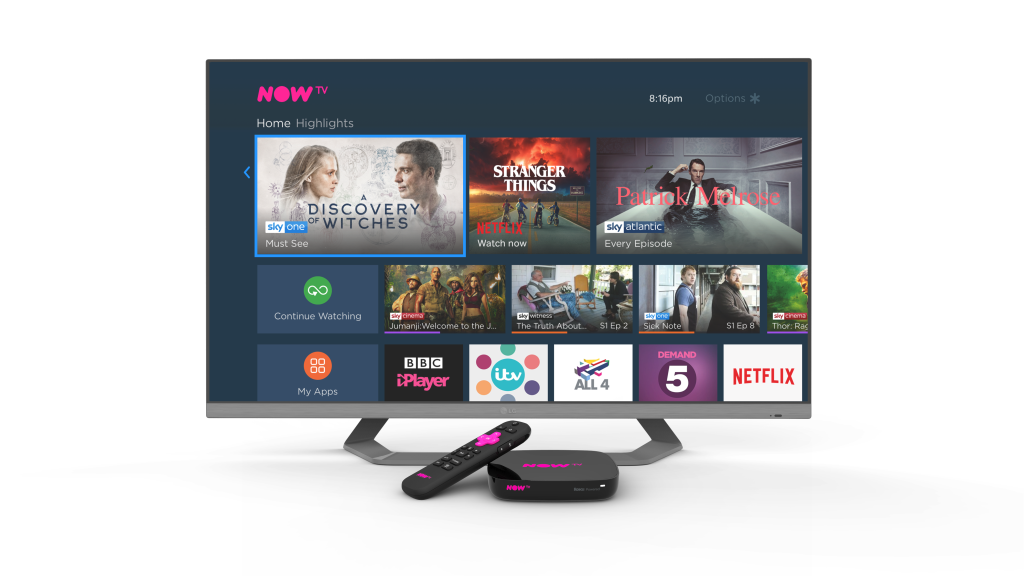 The Now TV 4K Smart Box is one of the cheapest 4K media streamers on the market at the moment, and provides access to most UK streaming services in a single place. It’s ideal for those that want an all-in-one solution, but if you have a smart 4K TV with Netflix and YouTube built-in (the only 4K content available on the Smart Box), you could save a bit of money and get the £14.99 Now TV Smart Stick.

The Now TV 4K Smart Box is one of the cheapest 4K media streamers on the market right now, offering access to a range of TV, movies, sports and reality TV from Sky and also the likes of BBC iPlayer, ITV Hub and UKTV Play.

That works out much cheaper than if you were to subscribe to each individually at day one, though it is worth noting that you’ll have to pay a monthly fee for each area of Now TV content you want to access, whether that’s Hollywood blockbuster movies or the latest football coverage.

The Now TV 4K Smart Box is the cheapest 4K media streamer on the market in the UK, and this is reflected in the design. It’s a no-frills affair, featuring a black plastic body with the Now TV logo emblazoned on top and a single LED light on the front to indicate power and interaction, but what more do you expect for such a competitive price? If you’re looking for something a little more high-end, maybe the Apple TV 4K is more up your street.

It’s a similar story with the remote; it resembles a standard TV remote with physical rubber buttons, opposed to swipe and touch interfaces favoured by other media streamers, but we think this is a smart move from Sky. Unless you’ve got the built-in tech to provide a flawless touch experience, it’s best to stick to reliable input methods. It comes with a range of media controls, along with a TV Power button and volume controls if your TV supports HDMI-CEC.

But while the Now TV 4K Smart Box looks unassuming from the outside, the range of content it offers makes it stand out from the crowd.

Before we delve into the content and app availability of the Now TV 4K Smart Box, we’d first like to briefly talk about setup as it’s a little different to the standard media streamer setup experience. We’ve all been in the situation where we have to sign up/log in to our streaming accounts using the supplied media streamer remote, manually selecting each character at a time and letting everybody else in the room see your login details. It’s counterintuitive, and a little annoying.

Thankfully, the Now TV does things a little differently. You’ll still have to use the Now TV remote to connect your Smart Box to your home Wi-Fi network, but once connected, you’ll be prompted to finish setup on a smartphone, tablet or PC via the Now TV website.

The Smart Box provides you with a unique code to enter on the Now TV website that’ll let you ‘link’ your smartphone/tablet/PC to your new box and log in to your Now TV account and redeem any Pass vouchers you may have. This negates the need to use the remote to input text, providing a faster and easier setup process than we’re used to.

The Now TV doesn’t exactly have the broadest range of apps available – with 47 in total at the time of writing – but the key point is that almost every popular UK streaming service is available on Now TV in a single place.

That means easy access not only to the suite of Now TV content, but content from BBC iPlayer, ITV Hub, All4, Demand5, UKTV Play and Netflix. While most media streamers offer some of the aforementioned apps, it’s rare to see this many on a single platform. In fact, the only real omission from the list is Amazon Prime Video, and considering Amazon has a similar offering with Fire TV 4K, we’re not too surprised.

Alongside the likes of iPlayer and ITV Hub, you’ll get access to a range of Sky content, though this is dependent on the subscription(s) you purchase. The Entertainment package offers great value if you’re into the likes of Game of Thrones and The Walking Dead, as these appear online the same day that they air in the UK, and the Cinema package has some impressive films that won’t appear on Netflix or Amazon Prime Video for quite some time.

However, there’s one issue that we simply cannot ignore; despite offering 4K capabilities, Now TV’s streaming services are limited to 720p. While it may not be as noticeable on a 1080p display, the difference between 4K playback and 720p playback is noticeable, and images seem softer and less detailed.

It’s not enough to ruin the experience, but it is a bit of a disappointment, especially considering the price of the subscriptions. Sky is working on upgrading the output to 1080p, but we’re still a while away from watching Now TV content in glorious 4K.

But while Sky doesn’t offer 4K content, the good news is that Netflix and the YouTube app on the Now TV both offer 4K playback – though you’ll have to pay slightly more per month to access 4K Netflix content. The likes of iPlayer, All4 and UKTV Play all output at 1080p, providing a slight bump in quality compared to Sky’s content.

Beyond the lack of 4K content, Now TV’s 4K Smart Box provides a nice user experience that is ideal for bingers and those that want to access on-demand content in a single place. The Best of Catch Up page is a favourite of ours, as it shows a selection of the latest TV shows and movies not only from Now TV, but from BBC iPlayer, ITV Hub, All4 and Demand5 too, providing a more holistic approach to catch-up TV.

You can even use Voice Search via the built-in mic on the remote to search not only for TV shows and movies, but for actors and actresses. It’s not as advanced as what you’ll find on the likes of Apple TV, handling only basic requests, but it’s handy for when you don’t want to type. The only downside? The search results are limited to Now TV content, and won’t show movies or TV shows from third-party apps like Netflix or BBC iPlayer.

Oh, and it’s also worth noting that while the previous Now TV Smart Box had Freeview capabilities, that has been ditched this time around.

The Now TV 4K Smart Box provides an all-in-one solution for consumers, providing access to most UK streaming services in a single place. It’s ideal for those that currently switch between media streamers to access their various subscriptions, and features like Best of Catch Up make it easy to stay on top of your favourite TV shows.

However, it is worth pointing out that if you have a smart 4K TV chances are you already have access to 4K Netflix and YouTube- the only 4K content that Now TV offers. Aside from Netflix and YouTube, all content available on the Now TV 4K Smart Box is capped at 720p or 1080p, so you won’t be missing out on much if you opt for the £14.99 Now TV Smart Stick.

You’ll have to switch between the Now TV Stick and your TV’s built-in apps to access 4K content, but with savings of around £30, it might be the better option.