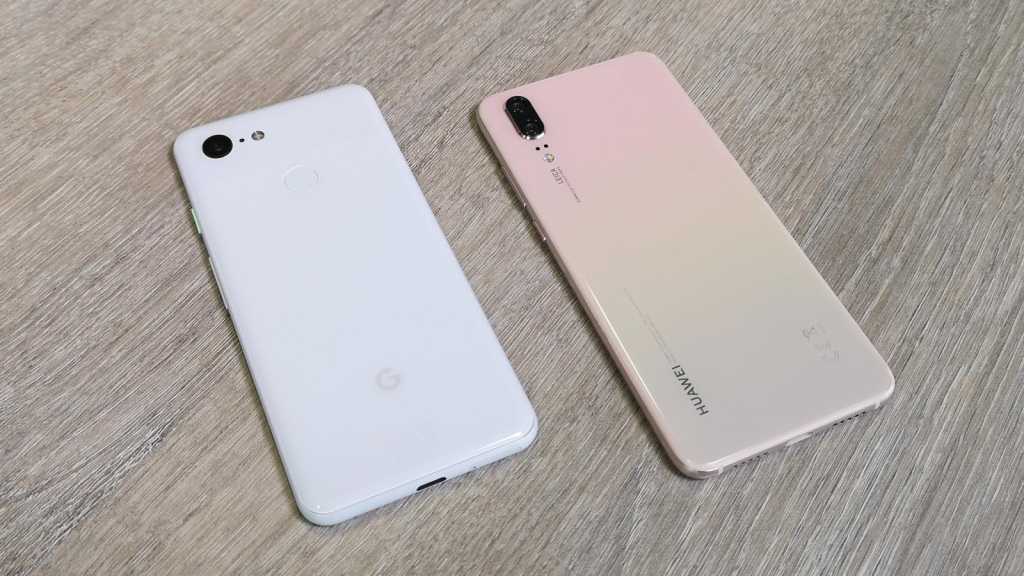 The Pixel 3 is more expensive than the P20 but gets you wireless charging, a better display (just) and a superior camera. If you want stock, clean Android 9 Pie it’s also the one to go for. The P20 has Oreo but should get upgraded to Pie. It has a very good cameras, a more eye-catching colourful glass design than the Pixel 3 and is cheaper by some distance.

There are many, many more Android phones out there than iPhones, despite popular conceptions. Android phones are about 80% of the world’s smartphones – so there are a fair few to choose from.

Google makes Android but it also makes its own hardware in the Pixel line of phones. Released in 2018, the Pixel 3 is similar in size to the Huawei P20, a similarly capable smartphone.

Here we compare both phones to see which you might want to spend your money on.

How much do both phones cost?

The Huawei P20 retails for £599 in the UK with 128GB from Carphone Warehouse. This represents better value, costing £240 less for the same storage option than the Pixel 3.

But Huawei is banned from selling phones in the US, so if you live there you’ll have to import one.

There’s also a Pixel 3 XL and Huawei P20 Pro. This article doesn’t include these phones, but we compare them both directly here.

Both phones are roughly the same dimensions but are quite different to hold. The Pixel 3 is smoother and more pebble-like, with glossy edges and a glass back that is mostly etched for a soft feel.

The P20 is still premium though with a glass back available in several eye-catching colours like Twilight that changes from blue to purple. It has a metal rim and dual camera compared to the Pixel 3’s one, though the Pixel actually has two selfie cameras.

Despite this, the Pixel has a curved screen with no notch whereas the P20 has a notch at the top of the display to allow it to reach to the top edges. Your buying decision might well rest on which screen design you prefer.

Both phones have slim font bezels but because of the design the P20 has a larger 5.8in display compared to the Pixel 3’s 5.5in. Despite this you won’t get a lot of extra content on the P20 as the size difference is small.

Both have a camera bump though the P20’s is slightly more pronounced, while the fingerprint sensor on that phone is on the front at the bottom. The Pixel’s sensor is on the back of the phone.

Neither phone has a headphone jack, but both come with a dongle in the box as well as USB-C wired headphones.

Here’s a table comparing the specs of both phones:

As well as the screen sizes, the screens themselves are also different. The Pixel 3 has an OLED display compared to the P20’s. OLED screens have slightly better colour reproduction and deeper blacks when calibrated correctly – and the Pixel 3’s is and looks excellent.

But the P20’s LCD is one of the best on the market and for most people (including us!) it’s enough, and excellent. It’s one of the reasons the P20 is cheaper but you don’t sacrifice all that much.

We reckon the Pixel 3’s camera is the best on the market. With just one lens it consistently gives the best results in most shooting conditions. The P20 is still excellent though, and has a second camera that allows for depth effect shots and monochrome.

The Pixel has dual front facing cameras that let you take wide angle selfies, which is something the P20 can’t do.

Buying a Pixel 3 will get you Android 9 Pie and three years of guaranteed security updates. This is not something that is certain if you plump for the P20, and it will depend on your region and mobile operator as to when you receive security or software updates.

The P20 ships with Android Oreo 8.1 with Huawei’s EMUI skin. It changes Android quite a lot, and doesn’t look all that much like Google’s plainer version of Android you’ll find on the Pixel 3.

Android on the Pixel will give you the best integration of all Google’s services, and as a result runs incredibly smooth. The P20 still runs all Google apps fine, but Huawei puts its own apps on there in the hope you’ll use them.

If you want the pure Google Android experience, the Pixel 3 is for you – but at a premium. But that extra spend gets you the best camera on a phone.

The P20 is still an excellent purchase and costs quite a bit less than the Pixel 3.