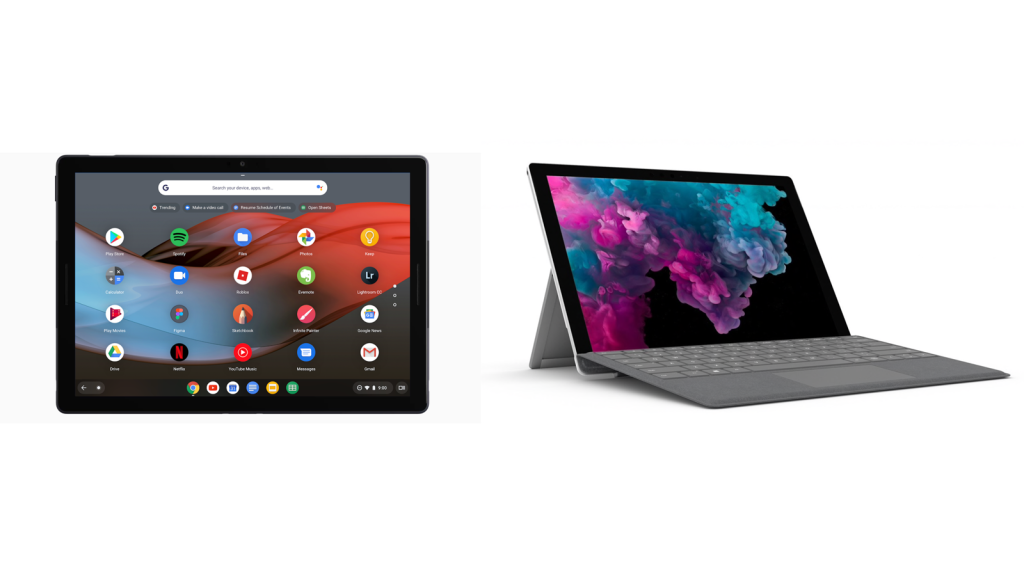 If you definitely want a lightweight, versatile 2-in-1 device for writing reports, creating presentations, consuming media, and general computer duties, then the Pixel Slate is perfectly capable of this. But once you start to factor in the additional cost of moving up from the base-unit, then adding the keyboard and stylus, the picture becomes murky. At around £900 or more, it doesn’t seem a sensible way to spend that much money.  The Surface Pro 6 has a similar conundrum, in that once you factor in the keyboard and Pen, you’re up in the territory where price tags come with commas. At least with the Surface Pro 6 you’re getting a device that can run almost any software at all and be used as a half-decent gaming PC. In all honesty, we’d encourage potential buyers to take a look at the Pixelbook and Surface Laptop 2 before making a decision. Or, if a tablet is really what you want, then the much cheaper 9.7in iPad just can’t be beat right now.

Google held a hardware launch recently where it announced the Pixel 3, Pixel 3 XL, Google Home Hub, and a new Chrome OS tablet called the Pixel Slate. It offers the advantages of a Chromebook – simplicity and security – in a form factor that’s more versatile than a traditional laptop. We see how it compares to Microsoft’s own advanced tablet, the new Surface Pro 6.

The Pixel Slate has no confirmed release date at the time of writing, but Google has said that it will appear before the end of the year.

You can pre-order the Surface Pro 6 from Microsoft.

If you don’t mind a smaller device, then the recently announced Surface Go is another option. This mini-tablet has a 10in display and costs £379/US$399 for the base model or £509/US$549 for the more powerful version.

You can order the Surface Go from Microsoft today, but first you might want to read our full Surface Go review.

The metal body is larger than a standard tablet (290mm x 202mm x 7mm), due to the screen size. But, by clever placement of the internals, the balance is well measured and makes the device feel lighter than its 721g.

Twin front-facing speakers adorn the side bezels, while the power button on the top edge also works as a fingerprint sensor. The only other feature on the front panel is an 8Mp f/1.9 camera that features a wide field of view so that video calls with multiple people doesn’t require everyone’s cheeks to be touching.

A Midnight Blue livery covers the back, where you’ll also find another 8Mp camera, this time with an f/1.8 aperture.

Two USB-C ports (one on either flank) are the connections of offer, both with capabilities for Charging, 4K Display output, and fast data transfer. One glaring omission is a headphone jack. Google no doubt has some complicated reason for this, but in all honesty it’s just plain stupid. This is a tablet and as such has room for the simple and useful addition of a 3.5mm port.

The Surface Pro 6 is very similar in design to its predecessor the Surface Pro. Thankfully Microsoft has restored some logic to its naming conventions, hence the reappearance of a number to denote which Surface you’re holding.

The main difference is a switch from the solitary magnesium colouring of the older model, to the option of a cool looking matte black on the Pro 6.  Otherwise, it’s the same 292 mm x 201 mm x 8.5 mm dimensions, 12.3in PixelSense display, and strange lack of any USB-C port at all.

Why this remains the case in 2018 is anybody’s guess, but you’ll once more have to do with a single USB 3.0, mini DisplayPort, Surface Connect, microSDXC card reader, and 3.5mm headphone jack.

We’re still big fans of the built-in kickstand, which remains a ridiculously elegant way to position the Surface Pro 6 at the right angle for typing, watching videos, or resting on your lap.

Camera-wise, there’s a 5Mp front-facing 1080p unit, which also supports Windows Hello facial recognition, and an 8Mp,1080p shooter on the back. These are accompanied by 1.6W stereo speakers with Dolby Audio Premium.

To get anything like the full potential out of either of these devices requires buying both the external keyboard and dedicated stylus. While the Surface Pro 6 can act happily as a tablet (insofar as Windows 10 is a tablet OS), it’s too heavy to hold for gaming or idly browsing the web, and the amount of optimised apps pales in comparison to the riches of something like an iPad.

It’s a similar story with the Pixel Slate. Yes, you can use it as a tablet, but given the choice between that and the iPad, even the most ardent Google fan would have to admit that the Apple route would be the one to take.

Adding the keyboards does change this equation quite significantly. If you’re a fan of Chromebooks, but want a premium device that can also double as a tablet, then the Pixel Slate is a compelling option. Chrome OS has developed quite substantially in recent years, and the lightweight hardware of the Pixel Slate is a perfect way to experience the productivity and leisure capabilities.

Depending on which configuration you go for, there’s plenty of power on offer, and even the Celeron models should zip along at a decent clip thanks to the lightweight nature of the operating system. However, we didn’t see this in practice when we got our hands on a Slate at the launch.

Again, you can configure the Surface Pro 6 to be a light-use device or production powerhouse depending on which CPU and RAM option you take. But, whereas Chrome OS doesn’t need much in the way of storage and RAM, we’d certainly recommend opting for somewhere a little up the chain if you want the Pro 6 to be future-proofed for a few years.

Here’s a breakdown of the technical specs for both devices;

This is where the rubber will really hit the road for most people. While either device is passable as a tablet, their main use will almost certainly be for getting things done. In that respect you have a clear choice between the full Windows 10 experience that comes with the Surface Pro 6, replete with the wide range of apps that run on the device itself, or the cloud-focussed ChromeOS on the Pixel Slate.

Now, it should be noted that many production apps, such as Google Docs, Sheets, and others, will run offline on Chromebooks, and thus the Pixel Slate. You can also download games, movies, TV shows, and music to enjoy when you’re not connected, but this is where the smaller storage options could cause problems.

Google has also given newer ChomeOS machines, the Pixel Slate included, the ability to run Android apps. This does add a fair amount of content, but these do tend to run in boxes on the screen rather than as optimised full-screen apps. In time we hope this will change, but at the moment it’s not quite there.

Google Assistant is a useful tool though, with its best-in-class voice recognition interface allowing users to launch apps, start emails and messages, or generally control the device without touching it.

The Surface Pro 6 is a fully-fledged PC, and as such will run anything you’d normally expect on a desktop Windows 10 machine. The Pixel Slate is a fancy Chromebook, albeit with an OS that’s been optimised for touch.