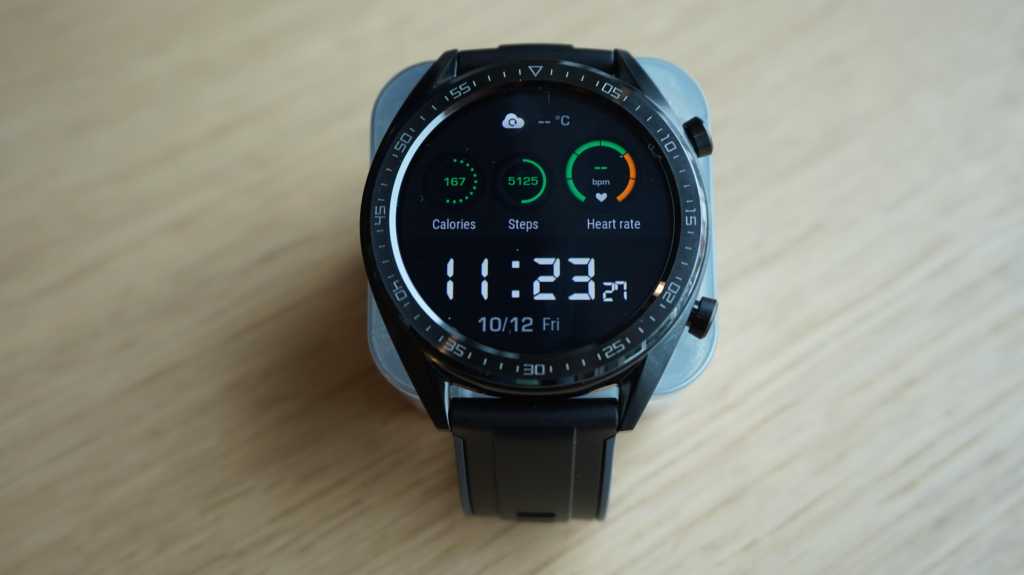 The two-week battery life and impressive exercise and sleep tracking features make the Huawei Watch GT a tempting option, but without third-party app support and a host of other common smartwatch features, we wonder just how smart the Huawei Watch GT can be. It’s an amazing fitness tracker, but not a very smart smartwatch.

Huawei has taken a risk by developing Light OS for use in the Watch GT, and while there are benefits to using it, there are downsides too. Find out what we mean in our Huawei Watch GT review.

The Huawei Watch GT comes in two variants, Sport and Classic. They sell for £179 and £249 respectively, and you can pick up the Sport on Amazon right now. The Classic is a little harder to get a hold of in the UK, as it’s not currently available via any retailer – not even Huawei’s online store offers the GT Classic, despite the fact that it has been technically on-sale for over six months. Unfortunately, our American readers are out of luck too, as the Watch GT is unavailable in the US.

This is a fairly competitive price point, undercutting the  Apple Watch Series 4 and similar to  Samsung’s Galaxy Watch.

Huawei said from the off that it wanted to make a smartwatch that looks like a watch, as opposed to the high-tech, gadget-y look of competing smartwatches. That translates to familiar features for watch users, including a circular face, durable body and crown(s) for interacting with the watch.

Granted, these crowns won’t be used in the same way as with a traditional watch, but they still provide shortcuts to exercise tracking, the main menu and more. If you can access something with fewer taps, why wouldn’t you? Don’t try and twist them though; unlike with many other smartwatches like the Apple Watch Series 4 and Misfit Vapor 2, you can’t turn the crown to scroll through on-screen menus.

The Huawei Watch GT looks similar to the Huawei Watch 2, and comes in two flavours; a variant with a black stainless steel body and a ceramic bezel design on the outer ring, and a slightly more expensive variant with a silver stainless steel body and brown leather rubber watch strap. While you may assume the rubber makes the leather strap suitable for swimming, you’d be wrong – you’ll have to fork out for an additional strap if you want to swim with the premium watch.

The good news is that the Huawei Watch GT uses standard size watch straps that are soft-to-the-touch, and while they shouldn’t cause any irritation, you can swap them out for other compatible watch straps if it does occur.

Both smartwatches come with a 1.39in OLED display protected by a diamond coating that should negate scratches, and while they certainly look like stylish watches, there’s no size variation available for those with smaller, dainty wrists.

Flip the Huawei Watch GT over and you’ll find a new heart rate monitor that the company claims is more accurate than what’s on offer from other smartwatches at the moment, and like with other Huawei smartwatches, the Watch GT offers contact charging as opposed to full wireless charging.

It’s a shame really, as those who purchase a wireless charging-enabled Mate 20 Pro could’ve charged the Watch GT with their phone! Oh well, maybe next year eh Huawei?

But while it’s largely business as usual in the design department, the Huawei Watch GT offers upgraded fitness tracking capabilities and a completely new software experience that you’ll either love or hate.

Unlike the Huawei Watch 2 that runs Android Wear, Huawei’s latest smartwatch boasts the company’s own operating system dubbed Light OS. Having control over both the hardware and the software of the smartwatch has allowed Huawei to enhance the battery life, with the Watch GT offering anywhere between 22 hours and a month of battery life, depending on what you’re up to.

That’s impressive, especially when you consider that similar smartwatches on the market, like the Apple Watch Series 4, needs to be charged every day. It’s certainly a freeing experience, not having to worry about the battery life of your watch all the time.

The long battery life is possible in part due to the inclusion of a double chipset architecture, allowing the smartwatch to use different chipsets depending on what it thinks you’re doing. If you’re asleep or stationary for long periods of time, the Watch GT will draw power from a low-powered chip, with the Watch GT only switching to the high-powered chipset when moving around or exercising.

Huawei claims that the HR sensor featured in the Watch GT is more accurate and efficient than what’s on offer by competitors. It’s called the TruSeen 3.0 HR monitor, and it differs from similar HR monitors not only due to the inclusion of new sensors, but also a range of self-learning algorithms to help keep results as accurate as possible. It’s also constantly measuring your heart rate for a more accurate readout both on the watch or the Huawei Health app, and also provides resting heart rate, single heart rate and average heart rate readings.

Combine the TruSeen 3.0 HR monitor with an impressive GPS system comprised not only of GPS, but the GLONASS and GALILEO systems too, and you’ve got a seriously impressive fitness tracker. It’s the first time this trio of tech has been featured in a smartwatch, and allows the Watch GT to triangulate your position based on readings from all three, providing more accurate GPS coordinates even in Urban areas with tall buildings, or when you’re out in the sticks exploring.

It should come as no surprise that the Huawei Watch GT has a focus on exercise tracking, and while the Watch 2 could do a lot, the GT looks to do more. As well as tracking standard exercises like running, jogging and rowing, the Watch GT includes an altimeter to give advanced readings like elevation when hiking, along with a range of water sport-specific measurements.

It’s water-resistant, meaning you’re free to use the Watch GT when swimming. In fact, the smartwatch offers specific tracking modes depending on the type of swimming you’re doing; Freestyle, breaststroke, backstroke, butterfly and more.

The Huawei Watch GT also features an intelligent Health Assistant that, on top of tracking your daily steps, standing hours and exercise, can intelligently track the different periods of sleep – awake, REM, light and deep. It doesn’t stop at tracking though, as the Watch GT can analyse the sleep data it collects and provides a range of tips (over 200 in total, depending on your issue) that can help you get a better night’s sleep.

These tips range from the basics like going to sleep and waking up at the same time every day to more advanced tips like making sure your room temperature is adequate for restful sleep. It really does provide insight into your sleeping pattern, though like with most sleep tracking apps, we immediately feel more tired after learning that we’ve had a bad night’s sleep. Psychology and all that.

The Huawei Watch GT is compatible with both iOS and Android, much like the Watch 2, with Android getting access to more features (likely down to stricter rules on iOS accessories). It offers Bluetooth support, but there’s no access to NFC for mobile payment support.

Light OS: You’ll love it or hate it

You’ll either love or hate Huawei’s Light OS – it is, as the name indicates, a rather light smartwatch experience. It provides access to basic functions like a torch, weather, compass, stopwatch, timer and alarms, but you miss out on a whole heap of smart features offered by Google’s Wear OS that really enhance the overall smartwatch experience. Features like access to Google Assistant, quick-access media controls, actionable notifications and even the ability to get directions at a glance from Google Maps – none of them are present on the Watch GT.

That’s not all either; Light OS offers no support for third-party apps, and Huawei has no plans to include it in a future update. It’s not exactly a new concept – Garmin initially refused to offer third-party app support on its range – but the company has since changed its stance, and now offers basic support for popular apps like Spotify, Uber and Deezer.

And, to top it all off, it just doesn’t run well. We’ve run into a number of software issues with the Watch GT during our time with it, and while most were inconveniences like minor freezes or duplicated notifications (or no notifications at all), it doesn’t feel like it’s ready for prime-time just yet. Huawei has said that it’ll be releasing software updates to improve performance and notification support in the coming weeks, but those using it right now may feel underwhelmed.

It’s an odd move from Huawei, and it makes us question whether the Watch GT is really a smartwatch, or just a fancy activity tracker. The design suggests the former, while the features on offer suggest the latter. The non-ability to install your favourite watch apps like Citymapper, control your music from your wrist or access Google Assistant will put many off the Watch GT and may force them to consider another option, like the Android Wear-enabled Huawei Watch 2, even with impressive battery life on offer. Light OS? More like Shite OS.

After our time with the Huawei Watch GT, we’re torn. It boasts incredible battery life, classic design and impressive exercise tracking tech with a competitive price tag, but we can’t help but feel Huawei’s Light OS lets down the overall experience.

Despite being called a smartwatch, Light OS doesn’t offer Google Assistant support, media controls, map directions, mobile payment support or even the ability to install third-party apps. That doesn’t seem very smart to us, leading us to believe that the Huawei Watch GT isn’t really a smartwatch, but is instead an impressive fitness tracker that looks like a watch.