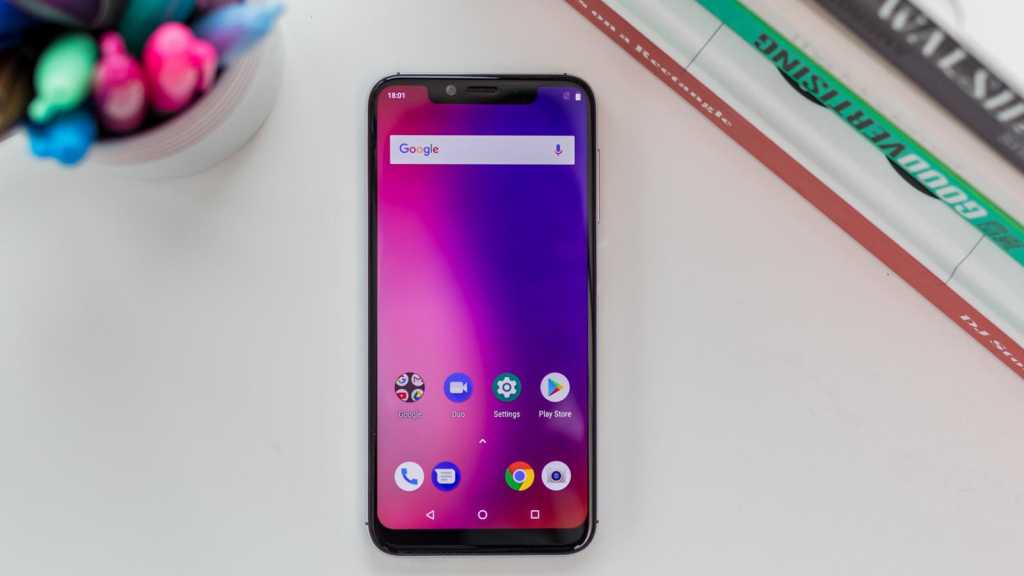 On paper the UMIDIGI One Pro’s spec seems too good to be true. Fast wireless charging, NFC, 19:9 IPS displays, dual-cameras, side-mounted fingerprint sensors and an attractive design aren’t things you have any right to expect at this price. But this is a budget phone, and as such some corners have naturally been cut. The display is just HD in resolution, performance is middling, the fingerprint sensor can be temperamental and the cameras can leave something to be desired. Overall, though, a great budget buy – and one people will have no idea was so cheap.

We’ve been singing the praises of the budget Chinese phone market for some time now, but even we’re a little surprised by the spec of this budget One Pro from UMIDIGI.

Where to buy the UMIDIGI One Pro

Although our review model was supplied by GearBest, this phone is also available direct from Amazon at £179.99 in the UK and $199.99 in the US.

Amazon will be the preferred buying option for many users, although if you are prepared to ship it in from China you’ll save money – GearBest offers the One Pro for £131.75/$169.99/€149.60. Just remember to factor in import duty, which is charged at 20% of the value on the shipping paperwork.

Since this phone isn’t available on a contract you’ll also need to factor in a SIM-free tariff, which offer much better value in the long run.

We often talk about phones looking much more expensive than they really are, and this couldn’t be more true than with the One Pro. Our review sample is the Twilight model, which has a gorgeous blue-green mirror-finish flip on the rear. It’s a magnet for fingerprints, but in between wiping these away it’s a very good-looking device. There’s a silicone case provided in the box if you get sick of cleaning up after yourself.

Front and rear are coated in glass, with a super-shiny chrome-effect metal frame visible in between. The One Pro is only 8.3mm thick, but it looks thicker – we don’t know if it’s the shininess or the fact the edges are entirely smooth, but it just doesn’t have the same slimline appearance of more expensive phones. There is also a noticeable join between frame and glass as you run your finger over the edge.

But the One Pro feels reassuringly substantial and amazingly easy to use in one hand – despite having a large 5.86in screen the 90% screen to body ratio and slim bezels make this feel like a 5.2in screen phone.

It’s a nice display, with all the benefits of IPS tech and futuristic in design with its 19:9 FullSurface panel and top notch that includes the camera, earpiece and sensors. It’s also very bright for a budget phone, and we measured 466cd/m2 with the Spyder.

But while it appears to offer adequate clarity the display is low in resolution even for a budget phone, with an HD+ 1520×720 pixels resulting in a density of 287ppi. That’s not terrible, and indeed not all that far off the 326ppi Apple touted as the point beyond which the human eye could not discern individual pixels, but it is one example of where corners have been cut to keep down costs.

At the bottom of the phone is a USB-C port and a 3.5mm headphone jack, and we’re pleased to see UMIDIGI has not followed other phone makers in using the USB-C port as an excuse to ditch the headphone jack. To the right of this is a speaker grille, which conceals a surprisingly loud stereo speaker.

Moving to the edges there’s a pin-operated SIM tray on the left that take either two SIMs or a single SIM and a microSD card up to 128GB in capacity. Given that there’s a generous 64GB of internal storage provided with this phone, sacrificing one for the other won’t be the headache it is with some budget devices.

Things get more interesting on the right side of the phone, and here we find a volume rocker and a power button that has an integrated fingerprint sensor, just as we used to see on Sony phones. It seems like a logical place to put the sensor in our mind, especially when it means there’s no circular ring spoiling the design at the rear, but we did find it usually took a couple of attempts to recognise our fingerprint.

This is a budget phone, so don’t expect flagship performance. However, what you do get is genuinely usable performance for daily tasks, and because of the lower-resolution screen the graphics are much better able to keep up on games and movies.

There is some lag seen in places, such as opening and focusing the camera and launching Google Play, but the One Pro is no slouch and should suffice for most users.

We ran the UMIDIGI through our usual performance tests and the results were up there with the Honor 9 Lite and only some way behind the Mi A2 Lite, the duo that lead our best budget phones chart. We’ve posted the trio’s scores in the chart below.

Battery life is pretty good from the 3,250mAh cell, and you should get a full working day. What we’re really impressed with, though, is its support for fast 18W charging that can juice up the phone in  90 minutes, plus wireless charging.

The latter is not even a given in flagship phones, let alone budget devices, and certainly not at 15W. The norm is more like 7.5W, as seen on Apple’s iPhones, which usually rules out wireless charging as a convenient but comparatively slow feature. Not so here.

It’s becoming rare these days to find a phone that doesn’t have two cameras at the rear, allowing you to achieve the popular bokeh effect where the background around a subject is blurred. With its 12Mp and 5Mp dual-camera the One Pro is also capable of that effect, but it looks bad, and completely unnatural.

You’ll find the Camera app very basic on the One Pro. You can turn HDR on or off – we think you’ll prefer to leave it off since the results are better without – and apply some real-time filters such as mono or aqua. There’s also a Panorama mode, but that’s really about it at first glance. Dig into the settings and you’ll find some scene modes, for some reason disabled by default.

The app for the front camera is even more basic, losing the bokeh and panorama modes, and we were amazed to find no beauty filters. This 16Mp selfie camera does have another use, however, enabling you to unlock the phone with your face.

In our test shots we found auto mode did a reasonable job in good daylight, but zoom in and a lot of noise and over-sharpening is evident.

With HDR turned on (there is no auto mode) the results were much the same, but with an unnatural over-bright emphasis.

And in low light the One Pro really struggled, unable to properly brighten the scene and leaving blacks lost and text looking fuzzy.

For such a cheap phone the UMIDIGI One Pro gets a lot of things right. We would like to see a higher-resolution screen, and some improvements could be made to photography, but it’s difficult to argue with the performance at this price and the design is very attractive.